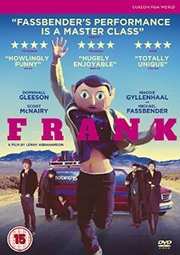 Synopsis:
Acclaimed Irish director Lenny Abrahamson follows up his award-winning films Adam & Paul, Garage and What Richard Did with an offbeat comedy about a young wannabe musician, Jon (Domhnall Gleeson), who finds himself out of his depth when he joins an avant-garde pop band led by the mysterious and enigmatic Frank (Michael Fassbender), a musical genius who hides himself inside a large fake head, and his terrifying bandmate Clara (Maggie Gyllenhaal).