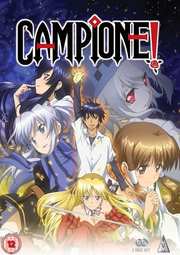 There I was, well satisfied with myself, having posted the review for Familiar of Zero, and with that polished off the last of the MVM reviews for July, when there was a sizable thump on the doormat. August’s releases had arrived for review. If I didn’t actually enjoy this stuff, I’d probably have gone mad by now. We’re also going a little hi-def happy this month, as of the four releases that MVM have, three are also available on Blu-ray. As usual with MVM, I get the DVD versions of the shows to review, and first up is Campione! Let’s see if I’ll be pulling out my wallet for the Blu-ray on this one. Actually the first thing I have to do is reprogram my brain, as ever since I heard of this show, I’ve been calling it the Campy One, and I expected it to feature as its main character one of those butch femme male comic relief characters that pepper anime these days. 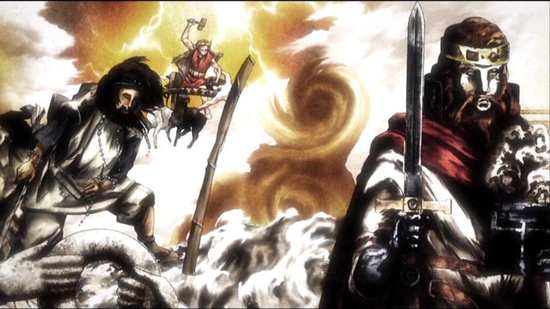 The absolutely, in no way at all whatsoever campy protagonist of this show is mild-mannered Japanese student Godou Kusanagi, who as we learn at the start of this series is visiting Italy to return an artefact that his grandfather picked up years previously. Before he can do so, he’s confronted by a blonde girl demanding the artefact, the Grimoire at knifepoint. But that confrontation itself is interrupted by a rogue god appearing in the city. Throughout history, the deities that mankind once worshipped have appeared in the world to wreak havoc. Most people dismiss their depredations as natural disasters, but a few people, like Erica Blandelli, the blonde girl and Knight of the Copper Black Cross, can see the reality of their existences, and attempt to slow them down, defeat them. Only Godou can see them too, and Godou winds up actually killing the god Verethragna, inheriting his powers. The few who can defeat a God become demon kings, dubbed Campione. The last thing that Godou wanted was to get involved in this bizarre world of myths and legends, and he makes haste back to Japan. Only the girl who couldn’t stand the pathetic pervert school boy Godou, is now in love with the God-killer Campione Godou, and soon Erica Blandelli shows up in his bed. And as a whole bunch of other gods and Campione decide to play for the fate of mankind in Godou’s back yard, Erica isn’t the only girl who’s suddenly taking an interest in him. 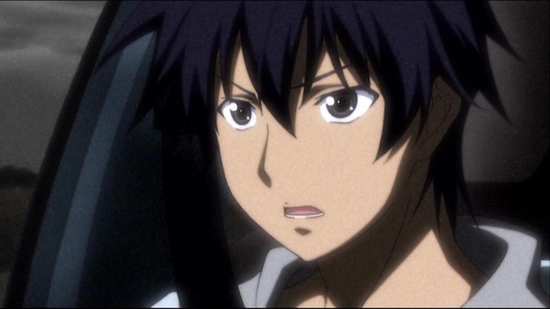 Thirteen episodes of Campione! are presented across two discs from MVM as follows.

Disc 2
8. A Hero Arrives
9. The Missing King
10. The Turbulent Demon King, The Sun Hero
11. Princess Shrine Maiden of the Long Sword
12. The Sword of Ama no Murakumo
13. Tale of the God-slayer 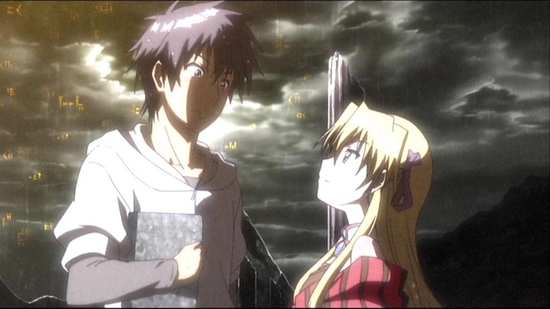 You might as well cut and paste from my other anime reviews when it comes to image quality, as it seems that the powers that be have finally settled on a consistent way of getting recent anime onto DVD. Campione!, which has made its way here from Sentai via Hanabee, gets a 1.78:1 anamorphic transfer, encoded in native PAL with the speedup that implies. The image is clear and sharp throughout, as flawless as you would expect from a digital animation, and free of significant compression and digital artefacts, merely a hint of aliasing as a sign of the DVD format’s limitations. 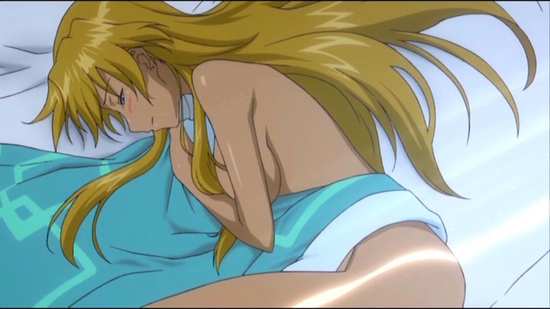 The animation itself is pleasing enough, with likeable and consistent character designs, fluid animation, the usual attention paid to fan service, and a decent budget apparent in the action scenes. It’s just that the anime looks wholly generic. You can plug these characters into any other anime, and I’d doubt they’d look out of place, while the show’s visual style lacks flair or originality, anything that differentiates Campione! from any of half a dozen similar shows. No doubt the Blu-ray will add in terms of detail and colour depth, but the Campione! DVD scales up to an HD panel pretty well. 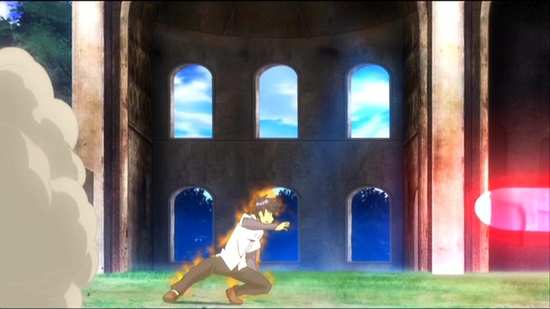 You have the choice between DD 2.0 Stereo English and Japanese with optional translated (white) subtitles and a signs only track. The original language track is the way to go here, with predictable voices for cookie-cutter character archetypes, but professionally performed and watchable enough. I gave the Sentai dub 30 seconds to impress me, and all I got for those 30 seconds was unbearable incoherent female raucousness and a typical whiny lead male voice, where syncing with the lip flaps only happened at random moments. That was 30 seconds of the worst Sentai dub I have heard to date. Who knows, the other 318 minutes of this show might be the best English dub ever given to an anime... I have no interest in finding out. 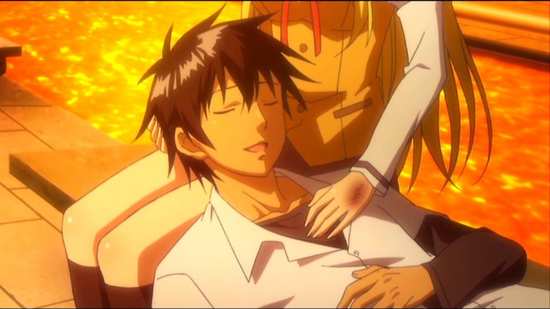 This is where I would have told you about the subtitle goof in episode 4, except that I got a pre-emptive e-mail from MVM informing me that they had caught the error, pulped the run, and re-authored and pressed a new run of discs. I doubt whether the minor spelling errors that crop up on Godou’s name in the early episodes will have been corrected though. 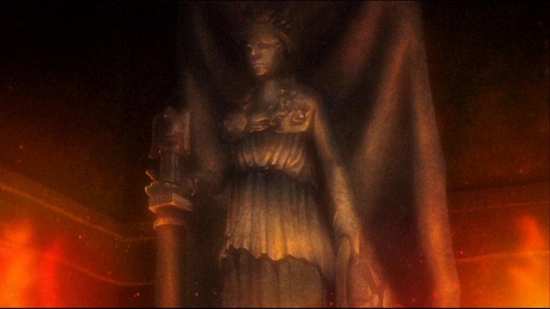 Campione! is presented across these two discs with simple static menus. As per the usual Sentai practice, each episode is followed by a silent, white text on black, translated English credit scroll.

The extras are all on disc 2, well I say extras, but a 1½ minute promo for Campione!, textless credits, and trailers for Familiar of Zero, Girls und Panzer, Accel World and Medaka Box are hardly going to set the world alight. 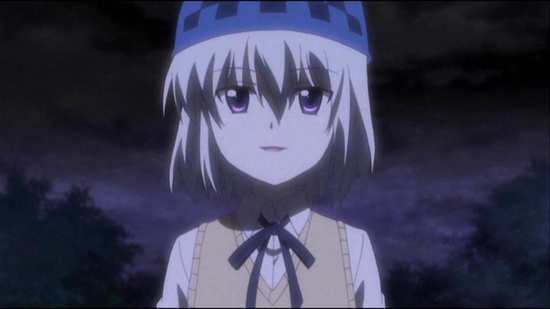 Once in a while an anime comes along that shakes you out of your complacency, does something with the medium that hasn’t been done before, or offers an instance where you have art and creativity and storytelling given priority over simple numbers and ratings and the bottom line. Shows like those remind you why you fell in love with the medium, and give you hope that it isn’t just the accountants left in charge of the creative industries. Campione! isn’t one of those shows. Quite the reverse actually, as Campione! offers the exact opposite, presenting for me what is the most cynical, designed by committee, exercise in geek fan service that I have seen in many a year. It reminds me of exactly what I lament about the industry, and tempted me to switch off and watch reality TV instead. 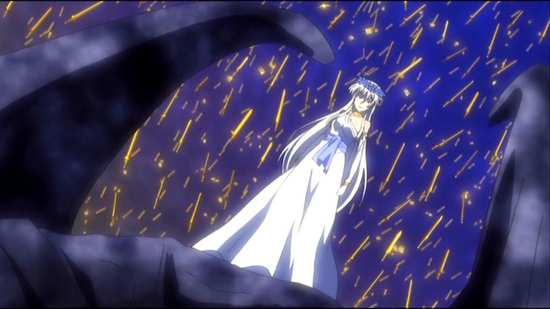 I don’t have any particular desire to talk about the show, to delve into the story, which is adequate enough. I have no bones to pick with the characterisations, which conform to the usual anime stereotypes to such a degree that the show feels like a comfortable pair of slippers. In terms of animation, it does what it needs to in terms of action and fan service, is competently animated, the characters don’t drift off model, and it’s of reasonably high production value. The Japanese voice actors at least give decent performances, the music drives the show well, and in terms of writing, the construction of each of the episodes is technically fine. The story has a beginning, middle and end, the episodes too flow well and don’t leave any loose ends, or suffer from too many plot holes. That’s despite the show’s tendency, especially at the beginning to leave big chunks of the story out. We miss out on Godou’s initial training and interaction with other Campione completely, and it jumps straight to the ‘back in Japan’ storyline. 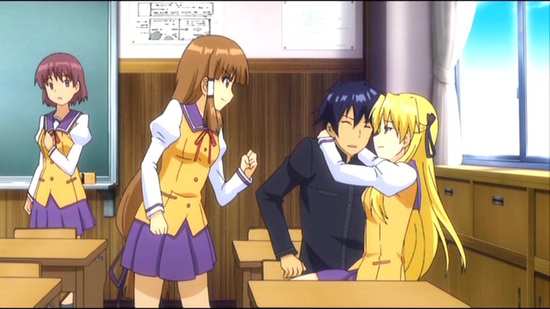 It’s just the cynical way in which the series is constructed that puts me off. We have our hapless male, who through no fault of his own becomes a God-slayer, and gains godlike powers, represented by a spinning mandala of symbols, each of which represents the particular godlike power about to be unleashed on his foes. And now that he has these abilities, he attracts the females as well, who all want a piece of this heavenly stud, most of whom previously would have seen him as a dork. We have knights, and we have shrine maidens, and to make things interesting, a goddess as well. So here’s the thing. His ultimate finishing move against the rogue gods only works if he has full knowledge of his foe. In this universe, rather than hitting the library, he can get a full download of info by some tongue on tongue action with someone in the know. And shock, horror, the people who know all about the gods are the girls in his ever growing harem. One by one he has to lock lips with them to get a download, cue sound effects of someone slapping two wet sides of beef together! And each girl in his harem wants to be girl #1, but is happy sharing him with the others, and also in this ultimate fantasy world of Campione! at no point does he have to snog a musty old history professor to get a download, the kind of person you’d actually expect to know all about ancient gods. 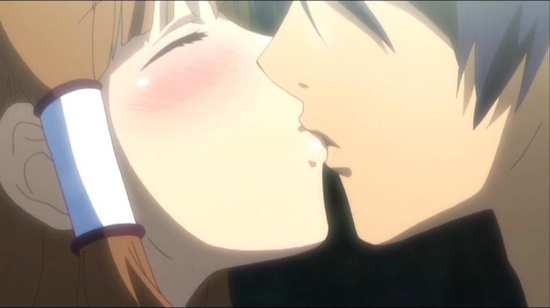 Once he’s done this, he unleashes his ultimate finishing move, unashamedly nicked from Fate/Stay Night’s Gilgamesh, and accompanied by his ‘words of power’, everything he’s learned from his download. So not only must we watch him slobber over some fan service bit of totty, we have to put up with a lecture in ancient mythology as well. Normal service will be resumed after each godly battle, when manly stud Godou is put back in his box, and replaced by wimpy Godou, who’ll get beats by all the other girls when he accidentally falls over and looks up their skirts. 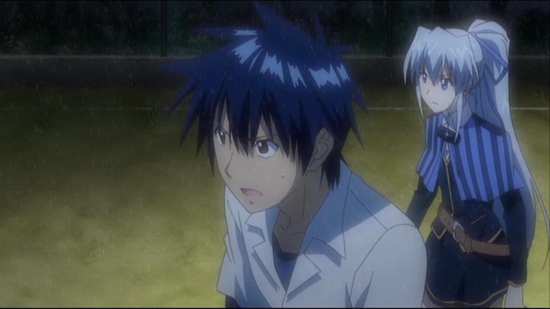 So here’s the thing. At this time, I have seen some 300 anime series, 150 movies, bits and bobs here and there. It’s basically a wodge load of anime, most of it full of clichés, and recycled stories, character archetypes and plot templates. I certainly don’t claim that I’ve seen it all, but enough to know when an anime production committee is pulling a fast one. Campione! is a cheap and nasty cash-in, the most depressing pandering to an otaku audience I have seen since, well Aesthetica of a Rogue Hero was just a couple of months ago, but two in one year really takes the biscuit. The funny thing is, if I had seen Campione! way back when I had just 10 anime series under my belt, I probably would have enjoyed it.