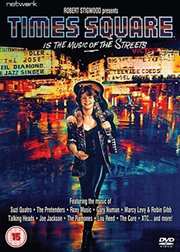 Pamela and Nicky are two opposites in this film of music, friendship and general anarchy. Pamela is a shy girl, daughter of a politician who wants to clean up the city, particularly Times Square. Nicky is a crazy, volatile street punk who is always getting into trouble and spends most of her time fighting. They meet up in hospital, both diagnosed with a condition that's never really explained to them, but one day Nicky has had enough and breaks out of the hospital taking Pamela with her. Everyone thinks that Nicky has kidnapped her, but really Pamela wants to go and is fascinated by the crazy antics of the wannabe punk.

Joining together, living on the streets, they hustle, steal and generally get into trouble, before they become the punk group 'The Sleez Sisters'. They throw TVs off buildings, play music and generally cause chaos. This is all covered by DJ Johnny LaGuardia, who promotes them as the saviors of society.

This film so wants to be the punk Saturday Night Fever it almost lapses into parody. Produced by Robert Stigwood, who produced the latter, it proved that apart from Grease he really was very much hit and miss (Sgt Pepper Movie or Staying Alive anyone?). This is a shame, as there is so much to like in this film and yet everytime it seems to gain a direction, it just diverts somewhere else. It seemed like it would be the typical story about a band becoming famous, but it's not and doesn't really have the same heart as the previous film.

Trini Alvarado as timid Pamela is fine and she suits the role well. The problem is that the role is boring. I watched and just wanted her to do something, anything to make me like her or care about what she was doing. But sadly that was not to be. Robin Johnson is amazing as Nicky, and there is a young Angelina Jolie circa Girl Interrupted feel to her character and look. It's a shame that she wasn't able to capitalise on this (Due to Stigwood's ludicrous contract that he made her sign). Her acting is erratic and crazy and worked perfectly so you could understand what she was doing and why.

The only notable person in this film is Tim Curry as Johny LaGuardia who is always wonderful. It is shame that the film wasn't focused more on him as the film really does come to life everytime he appears.

This is one of the main problems with this film is that it feels like a number of sketches connected only by the characters. Most are played for laughs and don't really have the gravitas that it needed to make you feel anything. During one scene Pamela and Nicky stage a robbery by gunpoint and Nicky shouts "I'll brain your blows out!' This should be funny, if it wasn't for the fact that this was a character threatening potential murder! Later when they are throwing TVs off the top of buildings all I could think is 'You could kill someone!' I understood that they were trying to create anarchy, but there's spray painting a slogan on a wall and almost committing murder!?

Direction by Allan Moyle is competent and though he was fired before the film was completed for refusing to film extra song footage I don't think this hurt or helped the film. The use of music is great and if you like that early 1980s Punk/New Wave sound you will love this soundtrack. Music from the likes of The Cure, Talking Heads, Lou Reed and The Ramones is featured and even the song performed by Nicky Damn Dog is not too bad. This song was later covered by band Manic Street Preachers on their debut and you can see how this film did influence their aesthetic early in their career.

My main problem with this film is that it just feels directionless. By the end The Sleez Sisters are a phenomenon, but it's never really explained why or how. You just have to accept that by the end they have a huge fan base who want to see them. The allusions to lesbian love throughout are simply that, allusions. Sure, you can read between the lines, but you could say the same about Thelma and Louise or any strong female buddy film.

The DVD only includes a Trailer and Image Gallery which is a shame. With all the amazing music it would have been nice to have had some look at that or isolated tracks. It is also a shame that the commentary that is available by Moyle and Johnson was not included, but maybe that is a rights issue.

Times Square is not a bad film, it certainly has a great soundtrack and any time Tim Curry is on the screen it is just perfect. Sadly, he doesn't appear enough and the two leads simply do not have the presence to carry this film. However as a time capsule of the early 1980s it is a fun film, just nothing special.