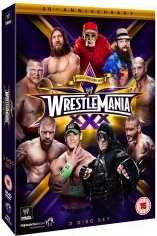 DVD
The Greatest Cage Matches of All Time
Related Articles

Thirty years of Wrestlemania is one amazing milestone, especially when you consider how much of a risk the first one was for the WWE and the McMahon family. Now thirty years on and it truly is one of the entertainment spectacles of the year. Like the Superbowl or the FA Cup Final, this is an event that brings people together, whether you are following the product or not.

This year proved to be an epic show that (depending on your point of view) was either the greatest night of WWE for a long time... or the dumbest. I will come to the reasons why as I seem to be in the middle on both counts.

First up, for an event 'hosted' by Hulk Hogan, there was very little Hogan on this show. It was almost like if he hosted a party, said hello and then you didn't see him the rest of the night. However, the interaction between him Stone Cold Steve Austin and The Rock was simply epic. The only person you could have added to that mix to make it even more awesome would probably have been Mr McMahon himself, but this was a great way to start the show.

Note: In reviewing this I will need to spoil the match results. So there may be spoilers.

Daniel Bryan vs Triple H
(For Main Event place)
I get it! I get it Triple H! You want to be in Game of Thrones!? Granted he looked more like Skeletor in Masters of The Universe! I mean that couldn't have looked cool?!
Within the intro of course Michael Cole gave us a nice list of people Triple H has faced at Mania, including Austin? When was that? And of course he doesn't mention that he lost most of those matches?! It was sad that the ending of this match would have effected my enjoyment of the rest of the PPV? And of course I love that someone had a sign: If Daniel Bryan Loses We Riot!

But it was an awesome match! It was almost perfection and thankfully Triple H knows how to put someone over and this was it. The end beat down was a little unnecessary, but to be expected. Sad thing is this could have ended with a handshake between the two and it would have been an amazing end to the story.

Shield vs Kane and New Aged Outlaws
I blinked and missed it. Great outing but far too short and maybe should have been an elimination match. Still some amazing moments.

Between this there was an Old Skool skit, which wasn't very funny and just an excuse for Ron Simmons to say Damn!?

Andre the Giant Memorial Battle Royal
Bizarre entrance. It was almost like saying "Hey you only care about Big Show and Sheamus". There are too many people to care who's in it or not for that matter. A mess until the last few were left. Sad that this was almost more entertaining than the Rumble. Great match.

John Cena vs Bray Wyatt
This match was so boring that when I originally watched it I actually fell asleep. This time it was at least watchable. If Cena had actually turned it would have been one of the most talked about moments from the year. Instead it's just another match. It was fine, just average.

Hall of Fame recap and I will discuss this later.

Undertaker vs Brock Lesnar
What
The
????

I do not believe what I just saw! And what's worse is this match was just average. It had some great moments, but the match smacked of "Doesn't matter what Brock does, we know who's winning". Or so we thought. As I say, it was a good match, some awesome moments, but compared to his last 4-5 Mania matches this doesn't even compare.

And if this had been his last match and Taker passing on the torch it would have been fine. Instead it was painfully bad and the ending possibly one of the most awkward ever! They were talking about Taker like he had died?

Divas Championship Match
What? We don't get entrances apart from AJ? And what was up with that Vicky Guerrero intro? That was painful. How did they even book the match so bad? Painfully bad, not even worth it for all the hot Divas!? The sad thing is the whole Bella feud thing in the middle of this mess could have made it interesting. Instead it was just a pointless, clumsy mess.

Seeing the main event competitors from the original Wrestlemania was pretty cool. Though it did make me go "Oh I forgot Hogan was hosting this event"?

WWE World Heavyweight Championship
Triple Threat Match
Randy Orton vs Batista vs Daniel Bryan
This match could have been so good. To some extent it was. It wasn't the one sided nonsense I expected and it wasn't the utter screwing over of Daniel Bryan. Bryan taking out Triple H with the sledgehammer was great As much as I didn't like the lead up to it, the Batista Bomb into an RKO would be an awesome tag team finisher! The last five or so minutes were great and finally I have a Mania moment I can get behind. The fact he was allowed to enjoy it and not get screwed over by a run in or some other nonsense. This is what we wanted. This is what we ALL wanted!
Yes
Yes
Yes
YES!!!

For the first time in a long time WWE have decided to include actual extras on their Wrestlemania DVDs and not just the prematch show and Hall of Fame. Those are included here with a great tag match between The Usos, Los Matadores, The Real Americans and Ryback and Curtis Axel. This was a great tag match and probably could have been on the main show.

Other features include a Top 30 Greatest Wrestlemania Moments, which with the full matches and some comments could have been an ideal candidate for a future WWE release. This is a nice twenty minute feature, but would have been better if it had been a bit longer with only the Top Five getting more than a few seconds and someone commenting on it... though I do have some issues with the placements on the list 'Austin and Bret not being Top Ten??'

The Top Five I do agree with, though Number One isn't so much a moment as a 'Thing' and though I think The Undertaker Streak deserved a mention it certainly didn't deserve to be 'Greatest Moment' especially when almost everyone declares Hogan slamming Andre (At Two) was the defining moment? And of course after this one, this promo was utterly pointless.

Interviews with Hulk Hogan about Wrestlemania which is a nice little interview about the Hulkster's legacy. There's also a short look at his career, which is far too short, but hopefully an indication that there is going to be a new Hogan DVD in the works. A look at the History of Andre the Giant is a short look at the career of Andre and is again was a little too short. I do hope this also means an Andre DVD is in the works too.

Interview with Batista about his return to the WWE really does show how much he doesn't appreciate the fact that he was brought back and thrown into the main event. He comments about how it would have been better to have debuted in somewhere other than Ohio? Surely, it shouldn't matter where you re-debut? We then get to relive the horror of him winning the Rumble and listen again to him saying he didn't care if he was booed or cheered. Not in a Heel way, but in reality. Surely someone creating this DVD should have looked at this interview and said 'Maybe we should leave this negative interview out?'

Interview with Randy Orton about being the face of the WWE is a nice look at his journey to the Wrestlemania 30. Interview with John Cena about his year and it's a nice little interview to show the effect the Wyatt's have had on him.

Short promo for Undertaker vs. Brock Lesnar is nice as they always are, shame there wasn't more of a look at this feud... maybe that's because it was thrown together last minute and it's one of the many reasons why the outcome was so disappointing.

A short promo about AJ's match is nice and just a shame again that the match was nothing special as watching this promo made the match seem to mean more. Finally a short feature shows Stephanie McMahon and Triple H showing off the Wrestlemania set which, though it seems a little pointless, really shows how vast the building was without the audience.

Watching the Hall of Fame is a little bittersweet since the passing of the Ultimate Warrior and it is surprising that there is nothing on the DVD to talk about the legacy of the Warrior. Also inducted are Lita, Jake 'The Snake' Roberts, Mr T, Paul Bearer, Razor Ramon (Scott Hall), Carlos Colon.

As always each person inducted were given a great promo video and introduction to show why they deserved to be in the Hall of Fame.
Unlike most years where I go 'Really you induct them? Why?' this year I agreed with everyone who was inducted and though I could argue that Carlos Colon never did anything in the WWE, his legacy in the wrestling business speaks for itself. Everyone is great and the final induction of Warrior which goes on for nearly fifty minutes is worth every minute of it. It is sad to watch, knowing that literally two days later he would be dead.

So how do I rate a PPV that gave me one of the greatest and also one of the dumbest moments in Wrestlemania history...no scratch that wrestling history? It was good, not great, it wasn't the best Wrestlemania ever, but it certainly wasn't the worst.

Maybe if the Divas match had been different, the Cena match had been more interesting and the Shield match has been more... well, match, then it could have been a great Mania. As it is, I'd say it's good, watchable and will certainly have people talking.