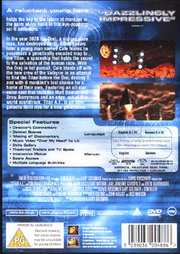 Back Cover of Titan A.E. 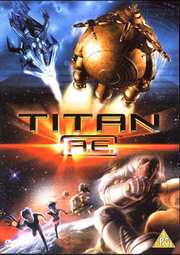 Synopsis:
A reluctant young hero holds the key to the future of mankind in the palm of his hand in this eye-popping, sci-fi adventure.

It`s the year 3028 and the Drej, a vicious alien race, have destroyed Earth. Fifteen years later a young man named Cale learns he possesses a genetically encoded map to the Titan, a spaceship that holds the secret to the salvation of the human race. With the Drej in hot pursuit, Cale blasts off with the new crew of the Valkyrie in an attempt to find the Titan before the Drej destroy it, along with mankind`s last chance for a home of their own.

Featuring an all-star voice cast that includes Matt Damon and Drew Barrymore and an edgy, out-of-this-world soundtrack, Titan A.E. is an intergalactic thrill ride for a new generation.

A sort of unique movie, I must say. It`s an animated sci-fi alright, but I somehow felt it lacked some ingredient. The problem is I cannot point exactly to the missing ingredient.
The story is rather simple - the hope of humanity is centered in the hand (pun intended) of an orphan human.
The video transfer is very good. There are no compression signs at all and the visuals are mostly stunning. The movie includes a very unique mixture of hand drawn animation and CG animation. While most of the CG animation looks great, they contrast the hand drawn one, thus making several scenes look "flat". There are quite a few 360 degree pan scenes, which are very impressive, given the fact that they combine the 3D and 2D animation styles.
The DD 5.1 soundtrack is awesome. The surrounds and the sub will not cease to work - literally. The opening scene (chapter 2) is a sonic (and visual) delight. The channels separation is very impressive and the clarity of the effects is superb.
The voices of the characters fit them as a glove, which is a major thing in animated features.
The menus are all animated with sounds.
The extras include a commentary, a couple of deleted scenes (notice their awful looks), a behind the scenes look, a music video and a photo gallery.
Bottom line - a rather well done animated feature that looks and sounds awesome. What is it missing? Gosh, I really don`t know. Probably some more depth to the plot, I guess.
posted by Zvi Josef on 29/5/2001 00:32
8 / 10

Titan AE may have bombed at the box office (I didn`t go to see it) but it shines on DVD. I bought this mainly because every time I went to the video store to rent it their one copy was out, so I wasn`t sure whether the £20 I spent on it was worth it or not. Thankfully, it was, this is not only a very underatted film, but also a film that stands up to repeat viewings. the reason for this is mainly due to the beautiful CGI and the relentless action that punctuates proceedings. Sure, its not Fellini, but it certainly is an entertaining ride and the characters and story (although a hotch potch of Star Trek, Battlestar Galactica and Star Wars among others) are actually fairly engaging.
posted by Pete Mallard on 27/11/2001 14:13
4 / 10

When most American films are released, the filmmakers have a target audience in mind. Be it a certain age group, or other demography, the marketing is usually aimed towards these people. With animated features, we usually see the film being directed towards a younger audience, although most quality animation is designed to appeal to adults as well. But, the makers of "Titan A.E." took an entirely different approach and decided to aim the film at America's most fickle filmgoers: teenagers. By employing well-known young actors, and a "hip" soundtrack, 20th Century Fox hoped to bring a new kind of film to the marketplace; an animated film for adolescents. It was such a financial failure that even before the film had been released world wide Fox announced that they were closing their feature animation division.

"Titan A.E." begins in the year 3028 A.D. We are introduced to Cale, a young boy playing by a stream on a seemingly perfect day. Suddenly, Cale's father arrives and informs him that they must go at once. The sky grows dark and futuristic helicopters whiz by, as Cale is taken to a military installation. In a rapidly edited scene, we see Cale placed on a spaceship that quickly blasts off, as his father heads for a bunker. As Cale's ship goes into space, we see the ground open and a massive ship, The Titan, emerge and flies into space. Just as Cale's ship gets into orbit, a group of alien ships, The Drej, invade Earth's atmosphere and begin to attack. Then, the Drej mothership aims a force-beam at Earth and blows it to bits, which in turn destroys the Moon.

The story then jumps ahead 15 years. Cale (voiced by Matt Damon) is now a young man. He works on a salvage space station, and tries to get along (unsuccessfully) with the aliens. As the lone human, Cale is portrayed as the usual American teenager angry, isolated and alone. Then, a ship docks at the space station, containing Korso (Bill Pullman) and Akima (Drew Barrymore), two humans. Korso confronts Cale and explains that he is the only hope for the survivors of Earth. Cale wears a ring that was given to him by his father, which is actually a map showing the location of The Titan. Cale is reluctant to believe Korso, but suddenly The Drej show up and attempt to kill him. Cale's only choice is to trust Korso and accompany him. After meeting the rest of the crew, Gune (John Leguizamo), Stith (Janeane Garofalo) and Preed (Nathan Lane), Cale uses his map to guide them to a distant planet, in hopes of finding The Titan. But, The Drej are now also convinced that Cale is the last hope for humanity and they will stop at nothing to kill him. Thus begins a race to see who can find The Titan first.

I was surprised by how much I liked the style of "Titan A.E.". The animation is a combination of classic cell animation, and 3-D computer generated images, with some special backgrounds thrown. This style gives the film a real texture and a wonderful sense of depth. While some scenes look better than others (it is mentioned in the audio commentary that the production was somewhat rushed), the overall look of the film is very impressive. The "Ice Ring", "Ice Planet", and "Space Angels" scenes are especially fascinating. Unfortunately the character designs fall somewhere between cartoony and realistic and never quite look right. Also the production uses muted colours, except for The Drej, who are a glowing electric blue.

While the animation is top-notch, it's the lack of story in "Titan A.E." that brings the film down. There were probably too many cooks in the kitchen, as it took five writers to come up with this uninspired, hackneyed yarn. The idea of the Earth being destroyed and the survivors trying to start a new world is a staple of Sci-Fi, but it just gets lost in "Titan A.E.". The Drej, being faceless glowing blue things, are the stock Want-To-Take-Over-The- Universe-For-No-Readily-Apparent-Reason villains, and just don't cut it. Everybody else, humans and aliens, are stereotypical characters, who we've all seen before in other films. "Titan A.E." boasts some passable voice acting (Nathan Lane as Preed is OK) but the three leads are just going through the motions and you will find that you just didn't care what happens to anyone.

"Titan A.E." comes to DVD courtesy of 20th Century Fox Home Entertainment. The film is presented in anamorphic widescreen and is letterboxed at 2.35:1. The THX-certified image on "Titan A.E." is basically perfect. There is no noise or grain to speak of, nor are there any signs of artifacting problems. The framing appears to be accurate and the picture is very clear. Unlike the computer generated "Toy Story" films, or "Shrek" with their false brightness in the colours the colours on "Titan A.E." have a muted palette so that the image doesn't exactly jump off of the screen. The diminished colour scheme is integral to the story and gives the film a moody intensity that is ruined by the banal dialogue and story.

The audio on "Titan A.E." is impressive, boasting both a Dolby Digital 5.1 track and a DTS mix. With the Dolby Digital 5.1 soundtrack, the speakers are constantly filled with the sounds of spaceships flying by and explosions during the battle scenes. There is a notable amount of bass response and the subwoofer is busy throughout the film. The soundtrack by Graeme Revell, as well as the original songs in the film, are quite 3rd rate, and the use of 'B' list rock bands to blast out all the time is one of reasons for the films commercial failure. The surround sound offers a wide soundfield and brings the viewer into the film as the spaceships move from one side of the screen to the other. The DTS soundtrack is, of cause, much more impressive, through better spatial integration and clarity over the Dolby Digital mix.

The "Titan A.E." DVD features many special features. First, we have an audio commentary with director Don Bluth and co-director/co-producer Gary Goldman. The commentary is very informative and dose have some interesting points, but it is technical. Bluth and Goldman discuss at length the animation techniques used in the film and basically give an overview of how the entire film was made. This will be of great interest to true fans of animation, but the ordinary viewer may well be bored by it. As Bluth and Goldman have worked together for years, their talk is pleasant and laid-back.

"The Quest for Titan", a featurette originally aired on FOX Kids Saturday morning show, is clearly a long commercial for the film, but it also gives us a good glimpse behind the scenes. The 20-minute plus special does an adequate job of bringing us into the world of the film, by introducing us to the voice actors and the animators. "The Quest for Titan" focuses on the film's "story", how the voice actors got involved, and then lastly shows how some of the animation was done. You get a layman's knowledge of how the 2-D and 3-D animation was combined "The Quest For Titan" also spotlights the "musical talent" that was brought together for the film's soundtrack. The DVD features a music video from the band Lit for their song "Over My Head." The video combines performance footage with clips from the film. Also from the promotions department, we have several promos for "Titan A.E.". There are two theatrical trailers, each letterboxed at 2.35:1. "Trailer C" is particularly interesting, as it features only sound effects and the Creed song, "Higher". There are also two TV spots, each letterboxed at 1.85:1.

For a further glimpse behind the scenes, there is an art gallery that features many stills showing both production design and character design. And finally we have four deleted scenes. Two are actual deleted scenes, while the other two are alternate cuts of scenes that appear in the film. Strangely, there is no cast and crew section.

While "Titan A.E." boasts some incredible animation, it is a pity that it could not be re-edited, with a new voice and music track, to try and save the film. The beautiful imagery can't overcome the lame story and characters.
posted by Tony Myhill on 27/1/2002 19:45