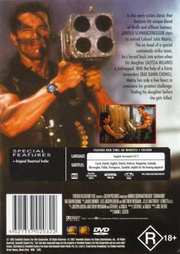 Back Cover of Commando 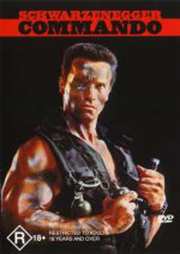 Synopsis:
In this early action classic that features his unique blend of thrills and offbeat humor, Arnold Schwarzenegger stars as retires Colonel John Matrix. The ex-head of a special commando strike team, he`s forced back into action when his daughter is kidnapped.

With the help of a fiesty stewardess, Matrix has only a few hours to overcome his greatest challenge, finding his daughter before she is killed.

-THE HISTORY:
One of funniest Arnie`s action movies ever, called as the Commando is finally here, but this time in Region 4 (Australia) dvd version, which includes also Finnish subtitles and it`s doned by Twentieth Century Fox. Commando is directed by Mark L.Lester in the year 1985, written by Steven E. de Souza (Die Hard 2 if I recall right), Joseph Loeb III and
Matthew Weisman. The soundtrack is composed by the "legendary" James Horner and the actors are Arnold Schwarzenegger, Alyssa Milano, Bill Duke (Predator), Dan Hedaya, Rae Dawn Chong, Vernon Wells and many others.

-THE STORY:
John Matrix (Arnold Schwarzenegger) is a former leader of a special Commando unit who is now retired and living peacefully on the mountains with his daughter (Alyssa Milano). One day though his daughter is kidnapped by an old enemy and Matrix is blackmailed to carry out an assassination if he wants to see his daughter alive. Matrix has eleven hours to find his daughter and rescue her from the hands of his ruthless enemies.

-DVD VS VHS:
One thing is for sure, this dvd had ten times better picture quality than the vhs, but they didn`t do enough work with the audio & extras. The vhs version running time was something like 90 minutes and it had all the violentic scenes, but in this Region 4 dvd version was 88 minutes and several scenes were cutted, over 30 seconds were missing, why? And it says in the cover Rated R 18+ and over, bullshit.

-THE VIDEO TRANSFER:
Well, the picture format is presented in 1.85:1 widescreen (also fullscreen) and it looks very clear & colorful, but maybe not as sharp as I had thought. Some scenes had some grain, but luckily it was rare and mainly it looks pretty nice for a 16 year old movie.

-THE AUDIO TRANSFER:
It`s presented as Dolby Digital Surround 2.0 and it doesn`t sound so great. Many explotions, gunfires and action scenes sounded a bit flat and the feeling didn`t get to level that I wanted. Dialogue`s were weak and the 2.0 didn`t use the channels well enough. Compared to Predator`s Dts, this Commando`s Dolby 2.0 sucks.

-THE EXTRAS:
Very poor. Only a trailer, just the Predator extras and the menu`s were silent and no animation. The scene selection was quite nice, but overall the extras sucks.

-OVERALL:
If you`re a Arnie fan from Finland like I am, then buy this great classic, but if you like to have better dvd version, then wait for the special edition (dreaming) or buy the uncutted Region 1 (U.S) dvd.