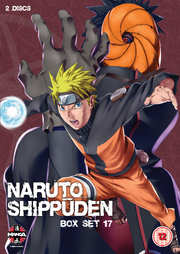 What else is there to say at this point, except here is the next instalment of Naruto Shippuden episodes. The series is getting exceptionally good at this point. All those various plots lines and character developments that were first begun well over 400 episodes ago in the original Naruto series, are really paying off at this point, and it seems that each new episode of Naruto Shippuden is a gem, especially as we’ve passed the recent batch of filler. It’s just that when you’re on something like your fiftieth review of Naruto in some form or other, finding something new to say about it becomes an insurmountable challenge. But still, that waffle managed to fill an introductory paragraph, so there’s hope for me yet. 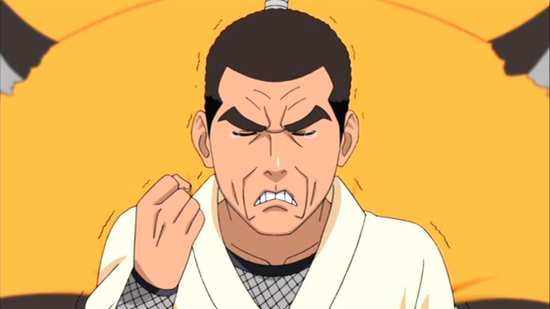 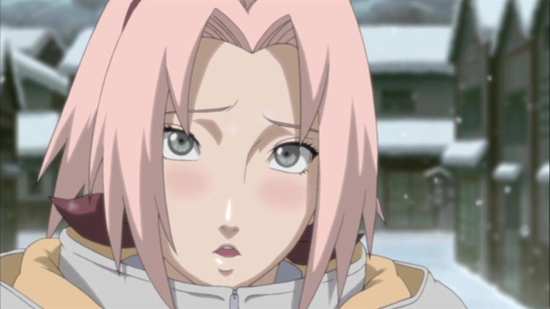 The dark clouds of ambition tore that friendship apart though, but it wasn’t Naruto’s ambition. It was Sasuke’s, sole survivor of the Uchiha clan, slaughtered by his brother Itachi. He grew up wanting revenge on Itachi, and wanting to gain in power and strength as quickly as possible. Sasuke gave into the temptation for easy power, offered by the renegade ninja Orochimaru, when Orochimaru infiltrated the village during the Chunin exams, and assassinated the Third Hokage. Sasuke left to join Orochimaru, and Naruto swore to get him back. For the last two and half years, Naruto has been in training with the sage Jiraiya, and he’s now returned to the village, empowered and ready to rescue his friend. But Orochimaru and Sasuke haven’t been resting easy either, while the Akatsuki group of renegade ninja, of whom Sasuke’s brother Itachi is a member, have been accelerating their plans, and top of the list is obtaining the Nine-Tailed Fox Demon, the one that is currently sealed up in Naruto. 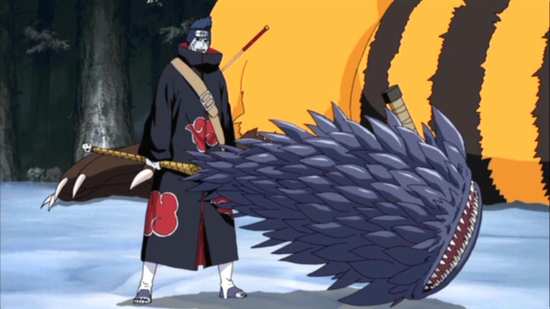 Previously on Naruto Shippuden, with the Eight Tailed Beast apparently lost, and only Naruto the Nine Tails remaining, it became imperative for the various ninja villages to come together to deal with Akatsuki. That meant convening a meeting of the various Kage on neutral territory. But Danzo of the Hidden Leaf, who had already usurped Tsunade’s position as Hokage following Pain’s attack on the village, saw it as an opportunity to subvert all the ninja villages and take control himself. At the same time, Sasuke saw Danzo’s attending the meeting as a prime chance for him to gain his revenge, and he moved to attack. As we start this collection of episodes, Sasuke’s actions apparently in support of Akatsuki have made him an enemy in everyone’s eyes, and dealing with the aftermath of the attack, not only do the Hidden Leaf ninja have to revise their strategy towards Sasuke, with Sakura having to swallow a dose of realism; they have to convince Naruto as well. Meanwhile reports of Killer Bee’s death, the Eight Tails Jinchuriki have been greatly exaggerated. 13 episodes are presented across 2 discs by Manga Entertainment. 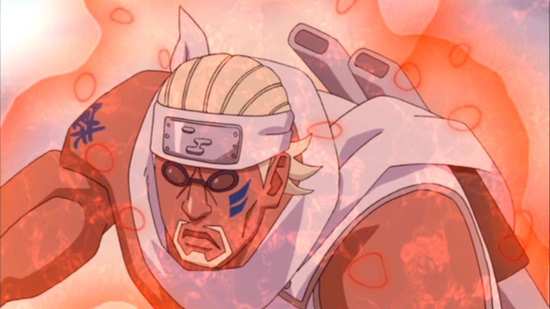 206. Sakura’s Feelings
207. The Tailed Beast vs. The Tailless Tailed Beast
208. As One’s Friend
209. Danzo’s Right Arm
210. The Forbidden Visual Jutsu
211. Danzo Shimura
Naruto isn’t buying Sakura’s confession, and neither is he comfortable with the home truths that Gaara comes to impart. In fact the realisation that Sasuke might just be too far gone to rescue almost paralyzes him. There’s little paralysis elsewhere, as Akatsuki’s Kisame catches up to Killer Bee, and the fact that he is the eight tailed Jinchuriki doesn’t stymie him at all. At the same time Madara brings Sasuke face to face with would be sixth Hokage Danzo, and Sasuke’s not about to let this chance for vengeance slip from his grasp this time. 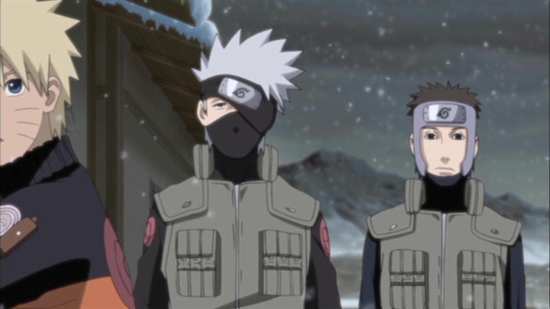 212. Sakura’s Resolve
213. Lost Bonds
214. The Burden
215. Two Fates
216. High Level Shinobi
Team 7 is back together again! Although it’s not in the way that anyone would have wanted. Sakura takes it upon herself to ensure that the Leaf Village’s duty is performed, regardless of her own feelings, but she’s bitten off more than she can chew when it comes to facing down Sasuke. Kakashi has already decided to stop her and instead do what might just be his first duty as the next Hokage, but no one is expecting Naruto to shake off his indecision and show up. But with Sasuke high on the defeat of his most recent target, it seems that by now he’s truly irredeemable. Will Naruto accept the inevitable, or will he hold on to his hope of somehow rescuing his friend from revenge? 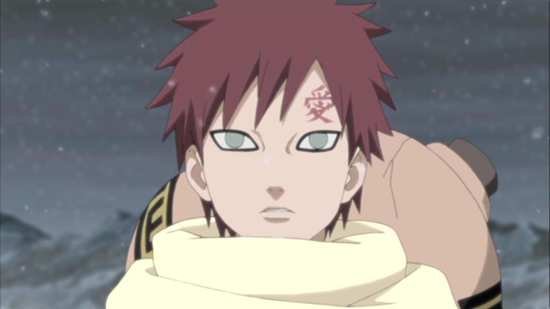 217. The Infiltrator
218. The Five Great Nations Mobilise
As Naruto and his friends make their way back to the Hidden Leaf Village, the various ninja villages and the great nations begin to put into motion their plans to deal with Akatsuki and with Sasuke. But there may already be an infiltrator at the highest levels of the Village Hidden in Clouds. 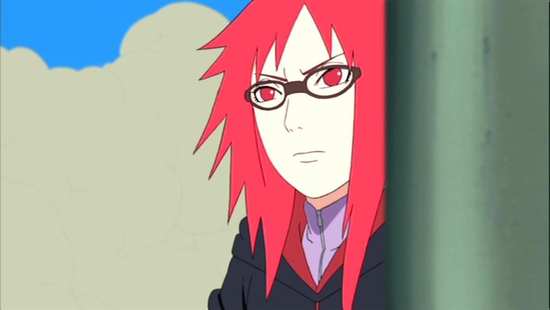 Naruto Shippuden is now presented in 1.78:1 anamorphic widescreen in native PAL. The image is sharper, ghosting and blended frames are absent, and there’s an increase in resolution. Absent this time is the judder that plagued the first attempt to release Naruto Shippuden in PAL, and it may be down to these being the Japanese broadcast episodes, not the US versions with the edited English language credit sequences. Shippuden’s animation and its character designs are sharper and crisper than those in the first Naruto series. It’s certainly more detailed while the colours are a little more muted. The story comes across well, and the action sequences are impressively animated, while conforming to a long running anime budget. 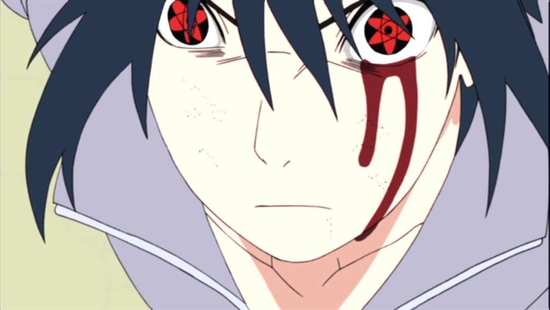 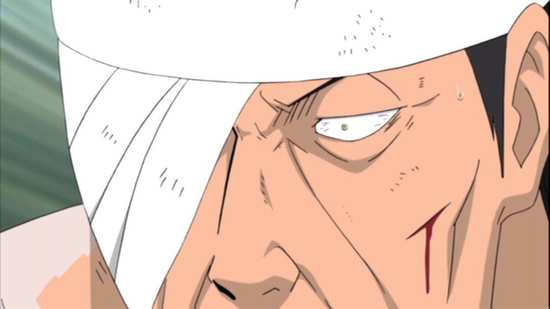 The discs get static menus and jacket pictures, with the episode chapter breaks in place.

The extras are on disc 2, 10 images in a Storyboard Gallery, 9 Tailed-Beast images in a Production Art gallery, and trailers for the second Naruto Shippuden movie as well as the Shippuden series. 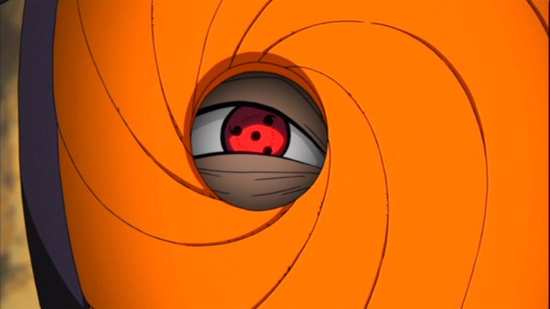 Let’s keep this brief. By this point if you are watching Naruto Shippuden, you don’t need my endorsement to spur you into buying this collection. Also, if you’re looking to start watching the show, this is absolutely the wrong the place. However, Manga Entertainment did recently re-license and re-release volumes 1 and 2 of the original Naruto series, and that’s the perfect place to start, although you’ll be in for the long haul if you do so. But this is the whole reason why Naruto fans started watching the series, stuck it out through those poorly paced early seasons, and the interminable filler episodes. For now we are at the point where the story is coming together, where all those elements that were sown right back at episode 1 and onwards of Naruto, start to blossom into really cool plot lines here. 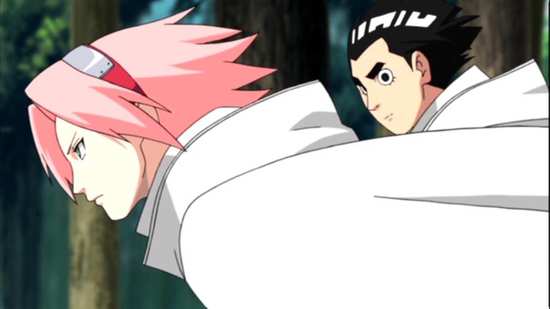 After two collections of awesome, action packed and relentless ninja goodness, the pace lets up a little in collection 17, and that’s actually a good thing. But first, we get to see Sasuke achieve one of his aims, taking revenge against one of the architects of the downfall of the Uchiha clan. That would be the erstwhile sixth Hokage Danzo. At the same time, Akatsuki member Kisame catches up with the Eight-tails Jinchuriki Killer Bee, so we have two interleaved strands of action to take in. On top of that, we have the Leaf Ninja coming to their own decision about what to do with Sasuke, as they believe that he is at this point beyond redemption. It falls to Sakura to explain this to Naruto, and it’s the most important character development yet. Naruto’s high on his success against Pain, has achieved the recognition of the village, and it might have seemed that anything was possible for the young ninja. Unfortunately the way that Sakura breaks the news to him is patronising and even a little cruel, although she thinks that she is protecting him. For perhaps the first time Naruto is faced with a situation that he might not be able to resolve, and it brings him lower than we’ve ever seen him before. 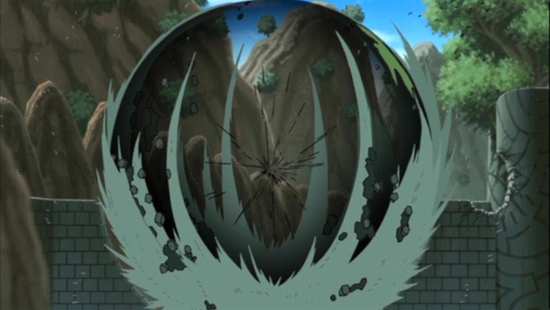 You can’t keep a bright orange ninja down for long though, and what follows is one of the epic moments that fans have long been waiting for. Team 7 is reunited, as first Sakura faces off against Sasuke, then Kakashi and then finally Naruto himself. Naruto finally gets to learn if Sasuke is truly beyond redemption, and given some of the actions that he takes in this arc, I think even the most hopeless optimist will begin to have their heart sink. But trust Naruto to pull something out of the bag. The darker that Sasuke’s path gets, the more that Naruto is willing to sacrifice in order to redeem his friend, and that means that try as Sasuke might to embrace his vengeance, there’s always a candle of hope burning to remind him of what he has shunned. 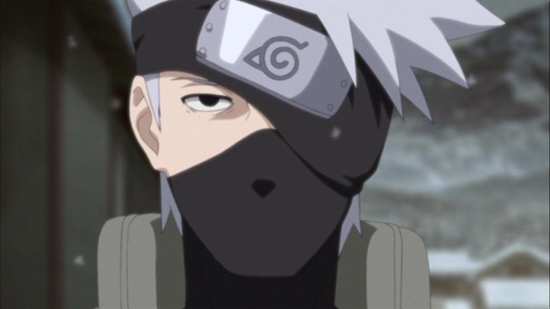 The final episodes are really just a prelude to the next arc, with the momentous upheaval of the Five Nations Alliance announced, and the various villages setting about preparing for the coming war. The storytelling in this collection of episodes is the best yet. The pace slows down in order to develop the characters more, so if you’re into the action side of things, this collection might not appeal as much as the previous ones, but it’s no slouch in showing the ninja on ninja action when it needs to. Right now, Naruto Shippuden is my favourite shonen anime again, and given how good One Piece has been of late, that’s saying something.