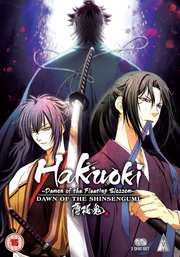 If you’ve seen series 2 of Hakuoki, you may wonder just where the story could possibly go, given the finality of the conclusion. But while we saw the end of the Shinsengumi’s story, the historical retelling, albeit spiced up with some supernatural conspiracies, the first two series saw the Shinsengumi at the height of their powers eventually brought low by historical forces. That still leaves the story of their rise to power to be told, and unsurprisingly, that’s where Hakuoki Demon of the Fleeting Blossom: The Dawn of the Shinsengumi comes in. It’s a prequel series, which follows their ascension to power in Shogun era Kyoto. While the first two series had as the audience proxy the character of Chizuru Yukimura, initially nondescript young girl thrown into the heady mix of manly warrior virtues, there’s no such proxy for the female target audience to empathise with here. Or is there? For at the start of the prequel series, the warriors pick up a wayward young boy named Ryunosuke Ibuki and put him to work at their dojo. 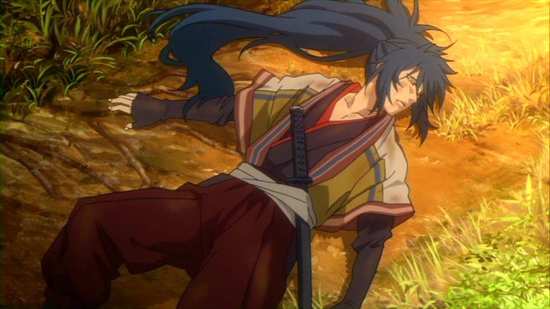 Ryunosuke Ibuki was busy dying of hunger after being robbed when an unlikely saviour appeared in the form of Kamo Serizawa, who proceeded to torment him some more before tantalising him with a rice ball. That meal comes with a price, as Ryunsoke learns when he wakes up in Kyoto, in the temporary lodgings of the Roshigumi. The Roshigumi are a self styled band of warriors, intent on making a name for themselves in Kyoto by serving the Shogun. By allowing himself to be rescued by one of their leaders, Ryunosuke has become indebted to them, and taking his leave isn’t going to be an easy matter. He finds that he’s become caught in the middle of some blatant politics, as not everyone in the Roshigumi agrees with Serizawa’s approach to handling things, especially not Isami Kondo and Toshizo Hijikata.

Twelve episodes of Hakuoki: The Dawn of the Shinsengumi are presented across two discs from MVM. 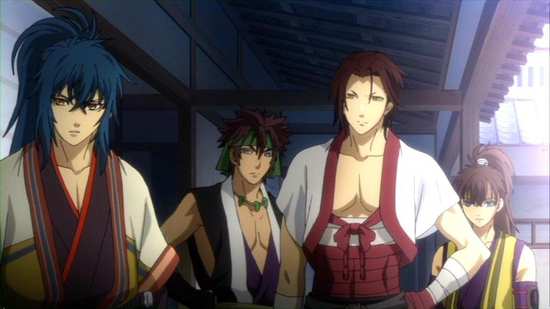 Disc 1
1. Dawn of the Warrior
2. Led by Destiny
3. Rules for a Pack of Wolves
4. The Blade Drenched in Blood
5. Stairway to the Blue Skies
6. Howling from the Darkness

Disc 2
7. Oath Made on the Wind Blowing Over the Grass
8. The Shades of Pandemonium
9. The Light of the Flashing Sword
10. The Brightly Burning Beacon
11. The Moonlight Night Filled With Flowers
12. The Great Dawn 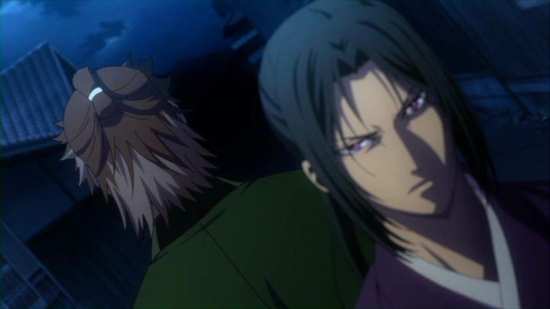 Hakuoki is presented in 1.78:1 anamorphic widescreen in PAL format. The image is clear and sharp throughout, the animation is smooth, and the character designs come across well enough, which is the big selling point for this series. It’s replete with pretty boy designs meant to elicit girly-squee responses from the female target demographic, and you don’t want to skimp on the quality control there. Having said all that, the animation is no more than adequate in getting the story across, while the world design is pretty generic for this kind of historical anime. Where Hakuoki does impress is in its use of colour and the atmospheric use of light and shadow, and it does establish an effective mood. Unlike the first two series, Hakuoki Series 3 did receive an English language Blu-ray release, but only on Region A discs through Sentai. 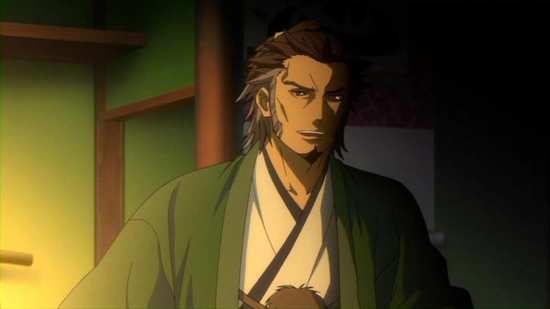 You have the choice between DD 2.0 English and Japanese, along with translated subtitles and a signs only track. I went with the original language track and was satisfied, if not exactly surprised by the quality of the voice actor performances. This is a show where character archetypes abound, and the voice actors fill those archetypes without straying too far from the expectations of the audience. Still, Shinichirou Miki as Hijikata is bound to be a draw. I gave the dub a try, and it’s one of those churn them out quick dubs, which stay pretty close to the subtitle translation, but you have to be a lot more forgiving than I to put up with it for long. 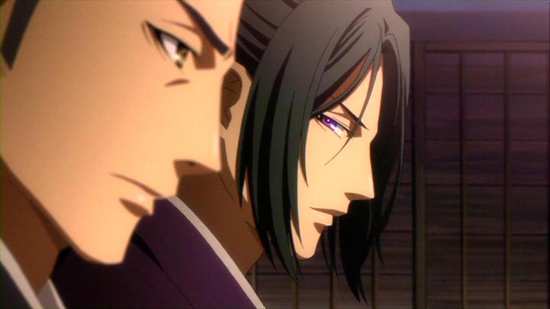 Hakuoki Series 3 has come to the UK from Sentai via Hanabee, and the discs present their content with static menus and jacket pictures. Each episode is also followed by a translated English language, white text on black credit scroll. The only extras on disc 2 amount to the textless credit sequences and trailers for Revolutionary Girl Utena (please come the UK on BD!), Dusk Maiden of Amnesia, Mysterious Girlfriend X, Hakuoki Season 1, La Storia della Arcana Famiglia, and Kokoro Connect. 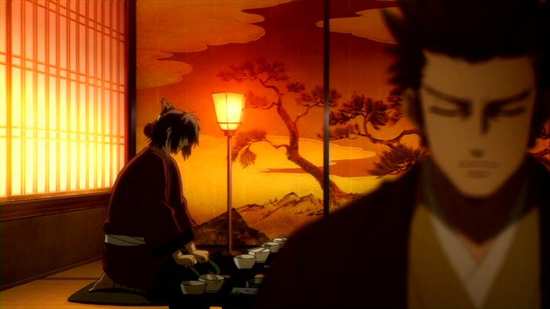 Now this is more like it. The first two series of Hakuoki were watchable enough, but I never could quite get into them. There is the impression that they were targeted at an audience bracket of which I’m not a member, while the balance between historical fantasy, horror and supernatural never quite seemed right. The show also had issues with its pacing, offering brief snapshots of history spaced months apart, but with little or no character growth to account for the long timeframe. Hakuoki Series 3 on the other hand is a prequel series, and it actually shows the formation of the Shinsengumi from the earlier Roshigumi group, who arrive in Kyoto from Edo for the sole purpose of making a name for themselves, proving themselves in the eyes of the Shogunate. This series follows them as they chase this ambition. 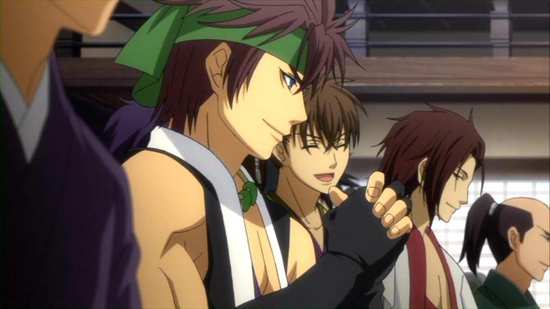 All the familiar characters are there, and the recreations of historical events with a fantasy makeover still take place, but you don’t get the same jerkiness of pacing with this series. You also get a couple of very interesting characters to drive the story, and you don’t get the wet blanket, audience proxy Chizuru Yukimura to sap the life out of the story. In the first two series, she served as the eyes of the audience, but she was also hopelessly devoted to the Shinsengumi, and pretty thin as a character. You still get an audience proxy here, but Ryunosuke Ibuki is infinitely more interesting and entertaining, because there is some drama to his character. He doesn’t want to be there, is constantly rubbing certain members of the Roshigumi the wrong way, and he constant gets his nose rubbed in his failings. When we first encounter him, he’s dying by the side of the road to Kyoto, and Roshigumi leader Serizawa challenges him to stay alive, beginning a relationship built on verbal abuse and debasement. 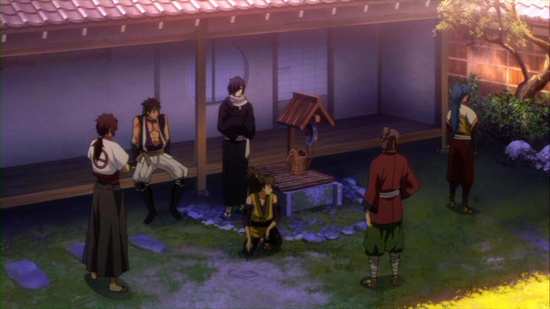 It’s Serizawa that makes this show. The other members of the Roshigumi have the ambition to succeed as warriors in Kyoto, but they don’t have the spine to do what needs to be done, in fact shy away from the dirty side of the business, decrying those ronin who abuse the people and throw their weight around. Serizawa knows that respect and fear go hand in hand, and he behaves much like the lawless ronin the Roshigumi are there to control, so much so that the other members of the Roshigumi spend most of their time apologising for his actions. He’s also a drunk, violent, abusive to more than just Ryunosuke, and inscrutable with regards to his motives. He also is the one who first agrees with the Shogunate to use the Water of Life to create Furies, those vampire-like warriors that drove the story in the first two series. In this prequel we see the start of that process, and we also meet Chizuru’s father as he begins conducting his human experiments. There is still that sense of supernatural mixed in with the historical fantasy, but Series 3 finds a more acceptable balance.

There’s a lot more in the way of character conflict and drama in Hakuoki Series 3, the story is a lot more interesting, and the way the series unfolds, revealing the sacrifices that the members of the Shinsengumi have to make to succeed holds the attention in a way that the first two series never did. Ryunosuke is a far more engaging and likeable protagonist, one who motivates and drives the story, than the wet blanket that was Chizuru Yukimura. Best of all, this is a prequel, so while you might appreciate the Easter eggs that tie into the first two series, you don’t need to have watched them to enjoy this show to the fullest.