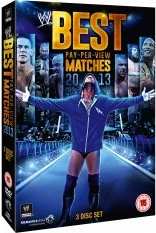 Every year WWE release a best PPV Matches DVD and at times I feel that maybe this is all they should release. I often review these PPV DVDs throughout the year and apart from Wrestlemania and the Royal Rumble the main thing I repeat over and over is how unlikely it is that I will watch the DVD again. Usually, I will remark about a match or two matches that make the PPV worth buying and then remark that it will probably be on the 'Best of' anyway.

To review this I've decided to go back and look at what I said about these matches when I first saw them and whether I Agree or Disgaree with them being on here. (The only ones not reviewed before are the two matches from Hell in a Cell PPV) :

WWE Championship Match CM Punk vs. The Rock (Royal Rumble)
"This was an odd match. It felt very much like a match from the late 90s/early 00s and the ending had a very Swerve Russo feel to it. However, it was almost a nothing match until the end."

Disgree. Should have been the Rock/Punk match.

CM Punk vs. The Undertaker (Wrestlemania)
"The match everyone cared about and raved about was CM Punk and The Undertaker. Now, there was no way that Punk was breaking the streak, but watching it there were moments when even I thought maybe Undertaker is going to cement Punk as THE MAN by allowing him to win. Now that would be awesome. This match was just filled with great moments and was without doubt the match of the night."

WWE Championship Match John Cena vs. The Rock (Wrestlemania)
"The main event of John Cena against The Rock was fine in a way. They both put on a solid match and in comparison to the previous year it was an improvement"

Randy Orton vs. Big Show (Extreme Rules)
"This was actually a pretty good match, both pulled out some great moments and the ending was amazing."

Steel Cage Match: Triple H vs. Brock Lesnar (Extreme Rules)
"I understand why this was last and WWE made the right decision. This match was awesome and it will be surprising if it is not in the running for Match of the Year. I could not believe how wonderful this match was. Both played well against each other and there were so many moments when it looked like the other had the momentum, but then it changed in a second. A great way to end the PPV."

Disagree. Note: This match had so little impact on me I completely forgot about it in my review. Why is it here? No idea. It's fine, but including this and not the amazing CM Punk vs. Chris Jericho match is disgraceful!!

WWE Divas Championship Match: Kaitlyn vs. AJ Lee (Payback)
"The Divas match between AJ and Kaitlyn is great. Both look amazing and work well in the ring. I think what makes the match more interesting was the feud going into it which was entertaining. I don’t think I’ve said that about the Divas since the days of Trish Stratus and Mickie James."

World Heavyweight Championship Money in the Bank Match (Money in the Bank)
"...featuring Cody Rhodes, Wade Barrett, Fandango, Damien Sandow, Jack Swagger and Antonio Cesaro is not given the time it needs to be a classic, but it is still a fun match with lots of exciting action."

In the Middle. Should have included just highlights from both matches.

CM Punk vs. Brock Lesnar (Summerslam)
"...we have The Best in the World CM Punk against The Beast Brock Lesnar in a simply phenomenal match that could rank up there with the best from either and certainly one of the best of the year."

WWE Championship Match: John Cena vs. Daniel Bryan (Summerslam)
"...we have the best technical wrestler Daniel Bryan against the most charismatic wrestler John Cena. Both put on a great match and if only the event hadn't ended the way it had done, this certainly would have gone down as one of the best Summerslam's ever."

Agree and Disagree. They should have included the match, but not the Orton cashing in.

World Heavyweight Championship Match: Alberto Del Rio vs. Rob Van Dam (Night of Champions)
"RVD against Alberto Del Rio for the World Heavyweight Championship could and should have been my match of the night. It pains me to say that, because it involves one of my least favourite wrestlers at the moment. But thankfully WWE messed it up and so what should have been great was merely average and not the match I had been expecting."

Fatal Fourway Divas Championship Match: AJ Lee vs. Natalya vs. Naomi vs. Brie Bella (Night of Champions)
"The Divas Four way which featured AJ lee, Natalya, Brie Bella and Naomi could be summed up with a sentence I have used many times 'the entrances are longer than the match... and probably more entertaining.'"

Agree, but there have been better Divas matches throughout the year. But just for the double sharpshooter I'll give it a pass.

The Shield vs. Cody Rhodes and Goldust (Battleground)
"...match of the night and possibly the best tag match I have seen in years. Goldust and Cody Rhodes against The Shield is quite possibly the match that should have headlined this PPV and I do wish that WWE had taken a chance and done just that. The build of the feud which was more to do with Triple H against Rhodes/Goldust and their father Hall of Famer Dusty Rhodes was intense and with The Shield being so hot and this being a cobbled together tag team, it seemed unlikely that the Rhodes boys would win. Because of this, this was a match, given the right amount of time so that both teams got over and by the end, the pinfall was wonderful."

In the middle. The only reason this is on here is because it includes John Cena. Not a great match by any standards.

Agree. This is possibly one of the few matches where the Cell actually means something. These were two who over a few months had a great feud that as much as I hated it, it made me hate Orton and made me want Daniel Bryan to just destroy him. Where better to do that, than in the Cell?

This three disk set is something that I knew would not totally satisfy me. I understand them not including every awesome CM Punk match (of which many are missing) and maybe if they did do specific superstar ones like they used to then this would be solved, but that's just a nitpick.

There are no matches on here that shouldn't be on here and though I disagree with some of them I understand why they are included. Funnily enough, this year rather than it being heavy with Wrestlemania matches it is actually the Payback PPV that gets the most love with three matches of which I would probably only agree with the Divas one.

One of the more surprising things is that every PPV is included and that this is not just every PPV Main event which is nice. The inclusion of the Money in the Bank match was a bit of a cheat in my opinion and if they are going that route they should just do a highlight reel, this could also be applied to the Royal Rumble and Elimination Chamber matches.

WWE Best PPV Matches 2013 is as you would expect, a collection of matches, most are great and do deserve to be on here, some not quite, but there's certainly nothing unwatchable on here. If you haven't been purchasing the PPV DVDs over the year this is certainly one to pick up.