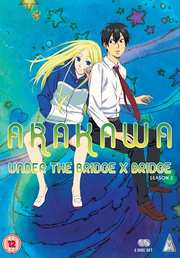 DVD
Arakawa Under The Bridge: Season 1

Review for Arakawa Under The Bridge X Bridge: Season 2

Arakawa Under the Bridge was quite the delightful surprise last month, taking the singular visual stylings of Studio SHAFT, and using them to bring out the best in an unexpected and surreal comedy. It’s a comedy about a rich heir to a global corporate empire and the oddball down and outs that live together with him underneath the titular bridge. It was a series of bizarre situations and daft characters that somehow managed to find a heart and got me engaging with the strange cast. If that first series had something of a narrative, it was about Ko Ichinomiya trying to establish a strength of character and gain some independence from his father. Once that was done, it seemed to me that Arakawa Under the Bridge had exhausted its welcome. But that’s the thing about surreal comedies, they tend to throw up the unexpected, and apparently there was enough in this premise to warrant a second series, which MVM now bring to us. 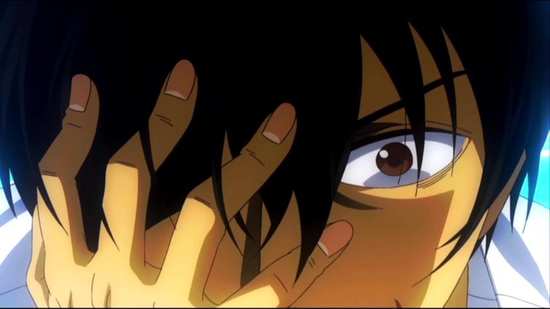 Ko Ichinomiya has had an unconventional upbringing. Given that he’s heir to one of the biggest companies in the world, that’s a given, but his father from an early stage decided to instil self-reliance and independence in his son, to the degree that if he burped his baby boy he expected payment in kind. If there is one thing that Ko understands, it’s the family motto, ‘Never be indebted to anyone’. Which makes it all the more distressing for Ko to have his life saved by a blonde haired girl named Nino, when he falls off a bridge.

He’s rich; he can give anything to settle the debt, money, property, investments. Nino wants to experience love with him. Nino wants him to live with her. Nino lives under the bridge. Nino is from Venus... 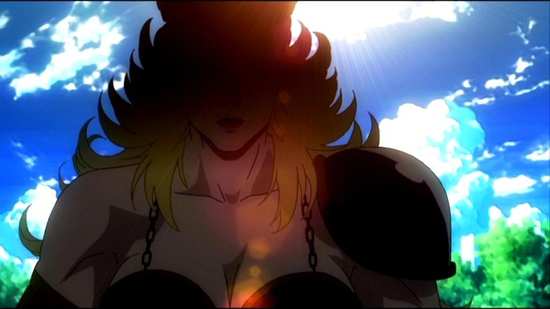 Nino’s odd enough, but she’s almost normal compared to the other residents under the bridge, where a community of oddballs has developed. The Chief is a kappa, a water sprite, and definitely not a man in an ill-fitting kappa suit. All residents under the bridge get renamed by him, and so Ko Ichinomiya becomes Recruit. There’s Hoshi who wants to be a rock star, and whose head literally is a star. Shiro can only walk on white lines, there are the metal masked twins, there’s even a church, run by a nun called Sister, who’s actually a man, with special forces training, and a hard-boiled attitude to sermons. The dairy farm is run by the woman with the most evil personality in existence, and who can take Sister down with a word, the vegetable garden is run by the clumsiest girl in the world, who protects her vegetable patch with banana peels. The blonde girl from Venus may just be the sanest of the bunch! Everything changes in this second season when Ko goes chasing after a lost baseball, and finds a tribe of Amazons, and the Captain of the Earth Defence Force shows up, looking for Venusians...

13 episodes of Arakawa Under the Bridge x Bridge are presented across two discs from MVM. 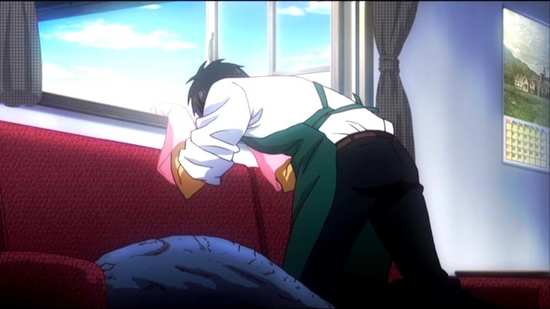 Just like the first series, Arakawa Under the Bridge x Bridge gets a 1.78:1 anamorphic transfer on these DVD discs, and courtesy of Hanabee Entertainment in Australia, it gets a native PAL transfer at that. It’s clear, sharp and colourful throughout, just what you need to bring across Studio SHAFT’s typically off the wall and inventive animation. The characters aren’t the only thing that’s quirky in this show, with different camera angles, visual techniques, and directorial styles used to bring off each episode with panache, and just as in shows like Bakemonogatari, it’s one that will definitely pay off with repeated viewings. The animation is smooth and detailed, and that detail comes across just as well when up-scaled to a flat panel HD display. The only English language Blu-ray release is from NISA in the US, and that’s on Region A locked discs.

Arakawa is a subtitle only release, and the only audio track is the DD 2.0 Stereo Japanese track. The audio is clear, without any issues with dropouts or glitches. The voice cast is effective and suited to the characters, bringing across the show’s surreal humour with energy. The music also suits the show well, with a very catchy opening theme and engaging incidental music. The end theme also lives up to the show’s insanity this time around, and the first six episodes get some unexpected live action footage for the end theme. The translated English subtitles are in a clear, white font, and are accurately timed, free of error. 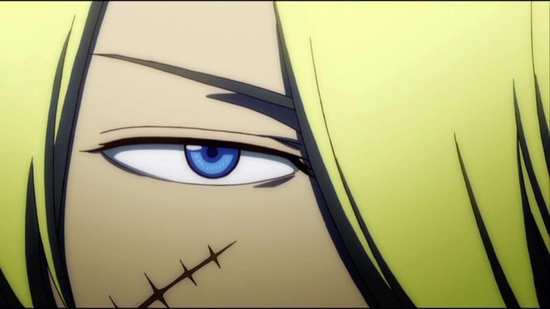 The discs present their content with animated menus, but the extras are on disc 2 alone.

The featurette gallery offers a 2-minute slideshow of some promotional artwork for the show.

The End Card Gallery contains 13 images of the sort that you’ll see flashed up on screen at the end of a broadcast, usually where the show’s sponsors get plugged. You can see these very same images in full screen in the slideshow alongside others. You’ll have to click through them in this gallery though.

Finally there is the trailer for the Bodacious Space Pirates series.

Once again, the Japanese voice actor commentaries remain the province of the US release from NISA. 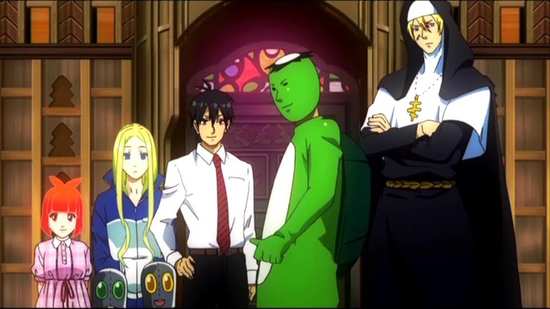 I could see a point of view that would have the second season of Arakawa Under the Bridge as less satisfying than the first. After all, with no idea of what the show had to offer, and with nothing really being promised, what the first series delivered was wholly charming, and wholly surprising. When the second series starts up, that first series has become back-story, and expectations have been established. What’s more, the second series also makes a few promises as it unfolds, promises that it really doesn’t deliver on. If you’re into narrative, and character arcs, then you will be disappointed by this turn of events. But Arakawa Under the Bridge x Bridge, just like the first series, really isn’t a conventional narrative driven show, it’s about moments, it’s about fun characters, and it’s about letting these jewels of humour sparkle in the perfect setting. The final scene of the show says it all. Life is a circus, and you really need to pause and take the time to appreciate all that the acts have to say. The second season of Arakawa really is more of the same, wacky, surreal and unexpected humour that the first season had to deliver, and I was enamoured of every moment of it. 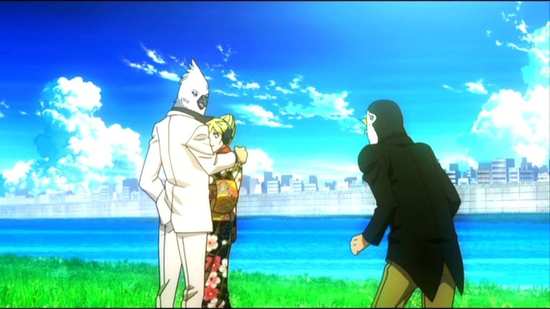 While the focus of the first season was on Ko Ichinomiya a.k.a. Recruit, the second season focuses more on Nino, and this is probably where potential disappointment may lie. The story promises to go into her background, try and explain who she really is, and mention is made of her absent family. Recruit’s father orders an investigation into her background, and audio tapes are revealed that promise to reveal her secrets. Also halfway through the run, she announces that she has to return to Venus. There’s plenty here that promises to lift the lid on the character. Except that other than that brief mention, her family is never thought of again, the investigation is derailed when the investigator falls in love with Whitey, and becomes a disciple of the white line, Hoshi’s recorded a few love songs over the incriminating tapes, and everyone decides to go with Nino to Venus, enter a makeshift astronaut training programme, and then forget about the whole thing when it becomes too onerous. 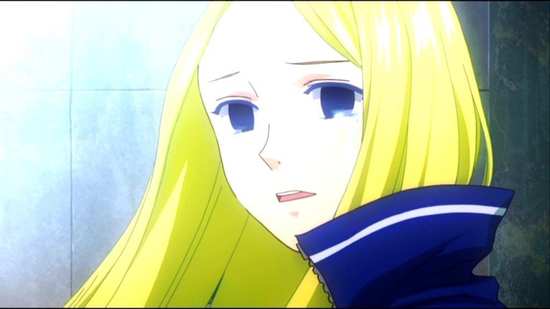 You’re not going to find out about the real Nino here, and nor should you. The show is really about taking the characters, and their antics at face value, and the magic would be lost if you found out that the Chief was an escapee from a mental ward, that Sister was a war veteran with PTSD, who had an unhealthy relationship with a little girl, that Hoshi was a singer with delusions of fame who couldn’t deal with his imagined fans. You don’t want reality in the world of Arakawa Under the Bridge; you want these characters to keep on tilting at windmills.

And tilt they do, getting up to all sorts of shenanigans as they interact and develop their own little community governed by their odd rules. And just to enrich the story further, we get a few new characters in this season, including the Amazon who suffers from terminal coyness, and who becomes a rival to Nino for Recruit’s affections. She has her tribe of Amazons as well, or three men in t-shirts and bras wearing goblin masks, and with a peculiar taste in junk food. Making a briefer and smaller impact is the Captain of the Earth Defence Force, who has a brief interest in discovering Nino’s Venusian secrets, before being distracted by his manga creating skills. The second series also fleshes out further some characters that were lightly touched on in the first, including the Last Samurai (barber), and lovebirds or rather lovebird and lovebee Billy and Jacqueline. 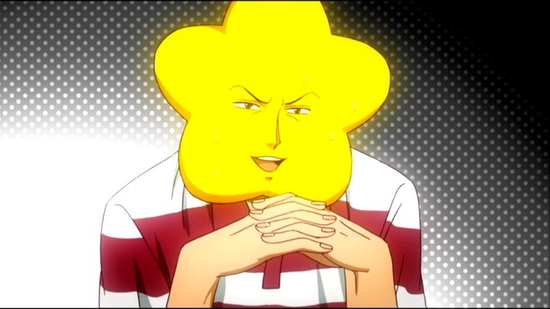 Arakawa Under the Bridge x Bridge is another instalment of a very charming and likeable surreal comedy sketch show. Its bizarre characters and ridiculous situations can’t help but put a smile on even the most jaded of faces, and while comedy shows rarely get the critical plaudits that more dramatic efforts get, you’ll certainly appreciate spending twenty minutes in the company of this delightful diversion.