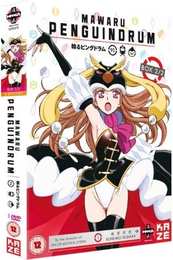 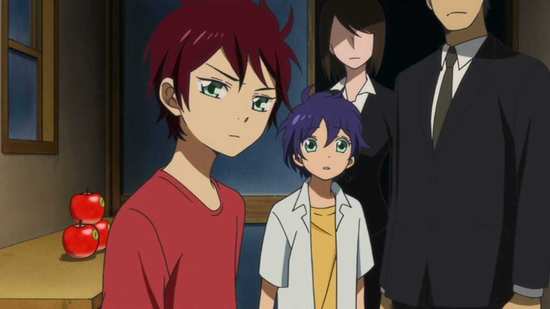 Oh dear. Where to start with Part 2 of a series that had me back-tracking through Part 1 to get a steer and not really feeling any the wiser as a result. Sometimes the wild freedom of unbridled creativity seems to get the better of manga and anime. This occasionally produces sublimely brilliant work. But sometimes it produces ‘Penguin Drum’. Maybe there’s something missing in translation but ‘PD’ (do you mind the abbreviation?) mixes pre-school childishness with old school cynicism to a degree that I’m not sure I’m altogether comfortable with. But now I’m putting the cart before the horse. Let’s back-peddle a bit first. 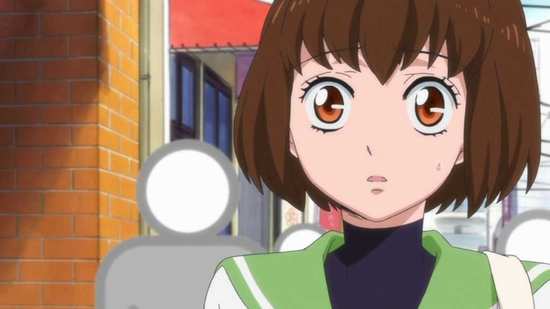 If you haven’t seen ‘PD’ part 1 then I suggest you read through Animeister Jitendar Canth’s excellent review here first. In fact, what follows assumes you have done exactly that. Click here now to read that first. 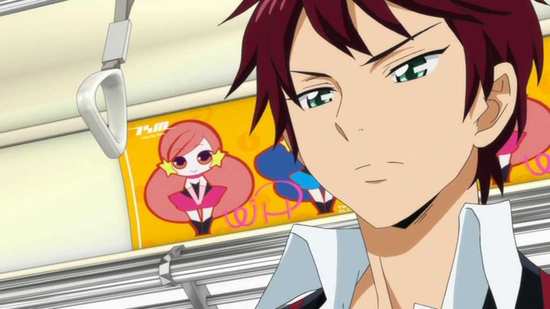 So you’ve seen part one and got used to the surreal, cutesy penguin side-kicks and you’re now wondering why part two should be given an 18 certificate. Well, if you dig deeper you’ll find that it’s only one of the discs that gets this and a little later I’ll tell you why (it’s not for copious fan-service but something far darker…). What’s weird for me is the constant juxtaposition of serious issues with madcap penguin-driven laughs. A bit like that odd feeling you get when watching ‘Comic Relief’ and get a surge of guilt for chuckling. 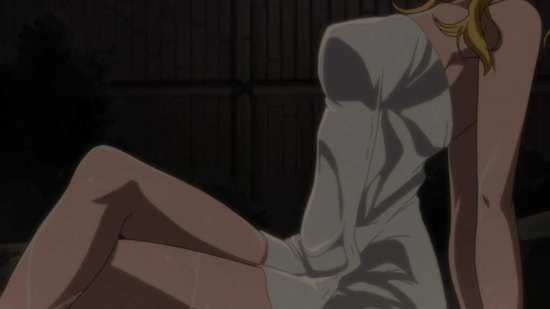 On the plus side, all the positive creative strands of Part 1 are still here. One example is the brilliant use of stylised crowds around the central characters in busy street scenes, clearly distinguishing our heroes among the fray. The series is full of nicely realised elements like that. 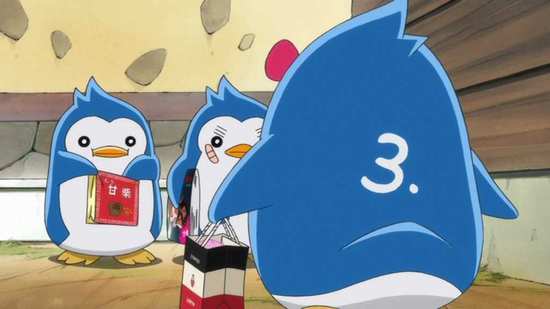 So a brief re-cap. Himari Takakura passes away after going out on a trip with her brothers, twins Kanba and Shōma. She’s saved by a spirit in a penguin-shaped hat. In return for her life the twins must search for an item known as the Penguin Drum with the aid of three penguins which are visible only to the siblings. In order to do that, they must first find the links to a complex interlocking chain of riddles that has wrapped around their entire existence, and unravel the knots that tie them to mystifying diary and a baffling string of strangers and semi-acquaintances who all have their own secrets, agendas and "survival strategies." And in order for Himari to live, someone else's chosen destiny will have to change. Following? Hopefully if you saw part one you are! I’ll assume so. 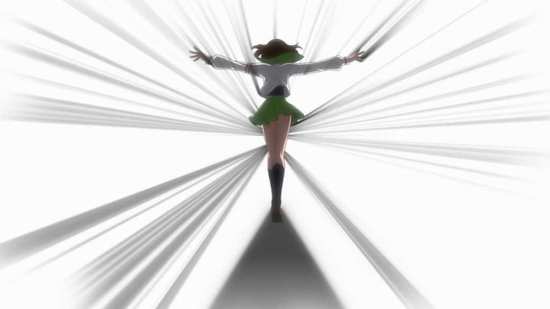 So on to part two. The brothers continue ever onwards in this quest to save their sister’s life though their resolve is sorely tested. How far are they prepared to go? And which of the two will succeed? Kanba gets quickly side-lined as, having agreed to do anything to help his sister regardless of consequences, he sets off on the wrong path entirely. Though he is devoted to his sisters’ cause, he is determined that it will be he and no other who will save her life. Shoma on the other hand is totally different – determined not to repeat the mistakes of his parents and working closely with Ringo to make things happen. Ringo is a real feature of the second part of the series and I howp it won’t spoil anything to say that she’s more than a little keen on Shoma. 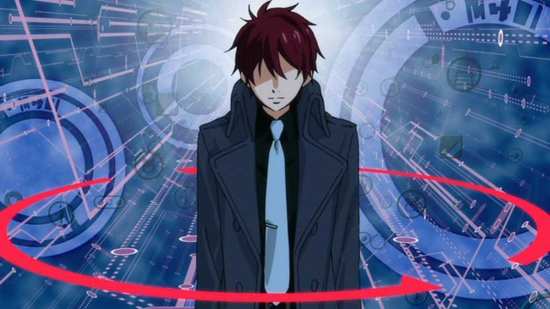 There are some seriously dark moments along the way, including bondage and even the suggestion of underage sex. But don’t worry. If that sounds a bit heavy (and it is) those three goofy penguins will be along to lighten the mood – whether you want them to or not. A very schizophrenic viewing experience that I’m not altogether sure I’m comfortable with. But hey – when did I become the arbiter of taste around here? Or moral boundaries come to that. 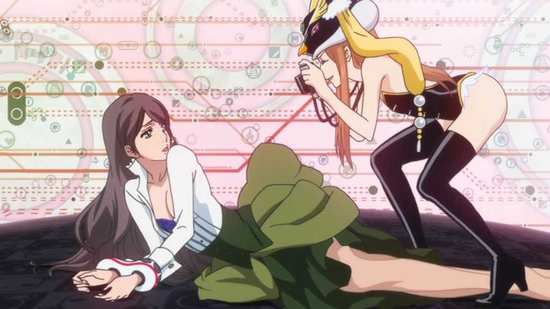 The 1.78:1 anamorphic transfer looks fine and there’s never a moment where it felt overly compressed. Audio wise you have DD 2.0 Surround English (with signs etc translated as text on screen) and Japanese with english subtitles. The English dub is fine though why the twins would have such different voices can only be down to actor availability. Still no more bizarre than anything else in this show I guess. 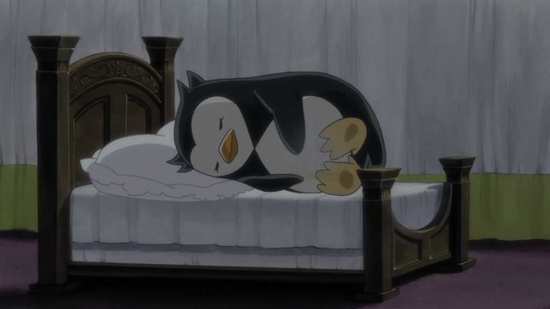 ‘Penguindrum’ is not for the anime uninitiated. There are far better anime’s to start with (‘Death Note’’ or ‘Cowboy Bebop’ being just two that I would recommend for newbies). It’s a weird, schizophrenic experience in a show that lurches from the childish to the most potently adult without apology. It also has a narrative that could easily been simplified and applied to half a dozen episodes in total. It over-complicates and loses its way again and again. Maybe one day I’ll give it a spin during a less busy period of my life where I may be in a more receptive frame of mind. It’s certainly a mind bending experience, something of a surprise given that it was Directed by the same chap who knocked out ‘Sailor Moon’. Oh well. 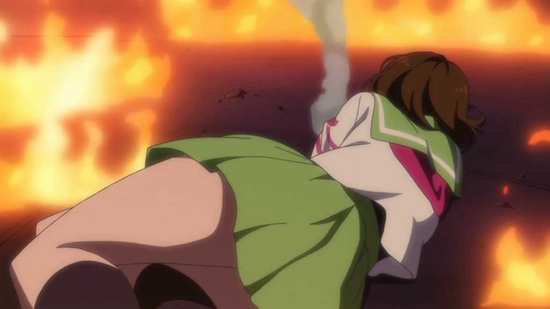