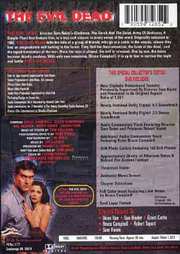 Back Cover of Evil Dead, The: Collector`s Edition

Evil Dead, The: Collector`s Edition (US) 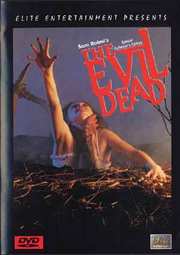 Synopsis:
THE EVIL DEAD, Director Sam Raimi`s (Darkman, Quick & The Dead, Army of Darkness) first feature film, is a true cult classic in every sense of the word. Originally released in 1982, THE EVIL DEAD tells the tale of a group of friends who go to a cabin in the woods, where they find an unspeakable evil urking in the forest. They find the Necronomicon, the book of the dead, and the taped translation of the text. Once the tape is played, the evil is released. One by one, the teens become deadly zombies. With only one remaining (Bruce Campbell), it is up to him to survive the night and battle.

The Evil Dead is the first in the outrageous trilogy that has become a classic. The acting is so poor and the effects laughable (But keep in mind their budget) but it`s worth a look. Not the best of the trilogy, probably the worst but it`s quite entertaining and extremely violent.
The new 5.1 mix is welcome but in my opinion the picture is diabolical and Elite could have done better. The special features are ok with a decent commentary by Bruce Campbell and another by Sam Raimi and Robert Tapert.
posted by verhoeven on 11/11/2001 10:47
8 / 10

Well this is the only disc that presents the film in it`s original aspect ratio!
All the (numerous) Anchor Bay editions are in widescreen.
But Evil Dead was shot on 16mm with an aspect ratio of 1.33:1 (i.e. Fullscreen!)
So the widescreen editions are actually showing LESS of the picture than this fullscreen edition ( all they did was chop the top and bottom of the picture off and Hey Presto! it`s widescreen! )
OK so this version lacks a couple of featurettes that are on the Anchor Bay Special Edition, but for me the film is what matters most, and this disc is hardly lacking in features anyway, with 5.1 sound, 2 commentaries, 20 mins of raw outtakes, a photo gallery and the trailer!

Anchor Bay should really have included both widescreen and fullscreen versions on their discs.

But hey!
They probably will when they release the Ultimate Special re-released Limited Special Collector`s packaged Numbered gift set Deluxe Edition sometime in the next few months!
posted by straightjacket on 1/12/2002 22:09
8 / 10

The Evil Dead you either love `em or hate `em. In my opinion the Evil Dead Trilogy are highly entertaining. This one, the first of the three is the worst. The acting poor and hammy and the effects laughable ( But it was a low budget so at least they have an excuse!) Bruce Campbell is actually quite convincing as the bloke in distress, hacking up bodies and ramming his thumbs into people`s eye sockets. The film is also a welcome to gore-hounds, with extreme violence and a scene where a tree rapes ash`s sister (Which caused a stir at the BBFC) are just some of the delights that await.

Unlike Anchor Bay` s edition we do not get a DTS ES track, which is disapointing to say the least. Though we do get a good Dolby Digital 5.1 track.

Only one word to describe it. BAD!

Two commenatries one by star Bruce campbell, the other by Writer-Director Sam Raimi and Producer Robert Tapert. They are good and informative. The 20 minutes of Alternate takes are good but don`t warrant a second viewing well none of the extras do really.
posted by the_film_king on 7/8/2003 17:40