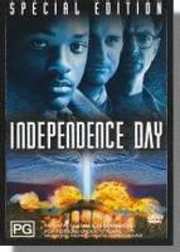 Synopsis:
One of the biggest box office hits of all time delivers the ultimate encounter when mysterious and powerful aliens launch an all-out invastion against the human race.

The spectacle begins when massive spaceships appear in Earth`s skies. But wonder turns to terror as the ships blast destructive beams of fire down on cities all over the planet.

Now the world`s only hope lies with a determined band of survivors, uniting for one last strike against the invaders, before it`s the end of mankind.

"I remember how good the Independence Day was in the cinema back in 1995, but when the vhs release came out, I was really disappointed. Now it`s time to forget the bad memories of the vhs version and check the Region 4 Independence Day 2 disc Special Edition dvd"

The Independence Day (ID4) is directed by Roland Emmerich who is known from movies like The Patriot, Godzilla, Stargate, Universal Soldier, Ghost Chase and the scifi classic Moon 44, which is my favourite Emmerich movie. It`s clear that the ID4 was one of the biggest blockbusters of the year 1995 and the special effects were so cool back then. Now after 6 years, the film is resurrected to a new format and it looks maybe better than ever. Finally I`m able to see ID4 with the quality that I always hoped for.

We all know how good Emmerich & Dean Devlin are to bring cool visions & U.S flags to the screen + to make saturday "popcorn" movies, but I think that the ID4 was more than just a movie. Yeah, I know that the plot is quite simple and the idea & story of ID4 is used in many movies, but for the first time we`re able to see the "War of The Worlds" with excellent special effects, thundering sound + we see the nasty aliens, isn`t that cool. Some may call this a class-b movie, but sometimes the entertainment is all we just need.

The packaging of this dvd ain`t as cool as in the region 1 five star collection ID4, but it`s just a regular keep case with nice covers. Luckily the transfer is awesome and the video is presented as widescreen aspect ratio 2.35:1 with 16x9 enhancement. The quality of the picture is one of the sharpest I have ever seen and it looks beautiful. The shadow detail is almost perfect and the picture has got a very nice colour palette. The green color saturation is cool, the orange color looks amazing and overall the quality is super cool. Still, this video transfer ain`t gonna get "full points", because I noticed a little amount of grain in few scenes, it`s actually quite hard to notice the dirt, but when watching the ID4 from Nokia tv from 1 meter away, I was able to drop the picture quality from 10 to 9+.

The sound quality is quite good, but I expected a little bit more from the Dolby Digital 5.1 (384 Kb`s). The sound is very clear and the talking scenes are quite perfect, but the special effects didn`t blow up my tv and I was disappointed. The sound didn`t had that deepness & earthquake effects that I was hoping for, but it was just good enough to get 8+. No dts, quite strange, because this a just that kind of movie that could use the Dts effects. By the way, David Arnold`s score sounded quite nice, not too loud, not too quiet, the balance was perfect between left-middle-right.

This ID4 2 disc edition has got 2 versions of this movie, just like the Region 1. The theatrical version runs about 138 minutes and the special editon about 147 minutes (9 minutes of restored footage). The difference between these two versions is that the thetrical version goes straight to the action and it`s for those who like to watch popcorn movies. The special edition is the better one, I think and it`s centainly made for me, because it gives more information about the characters & their relationships. It`s longer, gives some answers to the theatrical version and the special edition makes sense to the film.

The extra features includes Audio Commentary by Roland Emmerich and Dean Devlin + another Audio Commentary by Volker Engel and Douglas Smith. Then there is deleted scene
(original ending 4:18) and I`m glad that it was deleted. Good featurettes, the first is about half hour featurette Creating Reality (29:22), the second ID4 Invasion (21:58) and the Making Of ID4 (28:31) hosted by Jeff Goldblum. Many galleries like Alien Ships, Conceptual Artwork, Production Photographs, Sets and Props, Storyboard Sequences (3) and so on. Some nice teaser trailers (3) (5:09), television spots (8) (4:02) and Theatrical Trailer (1) (2:32) + some easter eggs like apple computer trailer & superbowl trailer. So extras are almost perfect, from quality & amount point of view. The menus are animated, quite same as in the Abyss, but I liked the abyss menus more. One more thing. The finnish subtitles didn`t work all the time + there is nice ID4 booklet inside the box. Buy this R4 if you don`t yet own any ID4 dics, but don`t waste your time if you already own the Region 1 five star collection ID4.

To get to the hidden features, insert the second disc from the set and from the main menu, go to the data console.Highlight the main menu entry and then press the right arrow on your remote. This highlights the power led on the computer and if you press enter now, you actually turn on the computer. Once turned on, a message appears briefly on the screen saying access: 7-4-enter. Then the spaceship is activated, go to main menu, press 74-enter and you`re able to get inside the spaceship to explore combat review & monitor earth broadcasts.

This is a fab all action Sci-fi flick despite i`ts far fetched and weak plot, BUT shame about the playback quality of this R2 DVD! While the extra features are good and abundant, there are a few scenes that are of "Standards Conversion"quality (blurred motion, poor colour, sound etc). I loved this movie when it came out in 1996, but I was so disappointed about it not being THX mastered that I returned it and bought a Region 1 copy over the internet. I do recommend that anyone in the Region 2 area (UK, Europe & Japan) who felt the same to do what I did. I also hope that Fox Home Video take notice and make amends by releasing the proper (THX mastered) version. Strange considering that at the same time when this R2 disc was released in the UK, THE ABYSS (SPECIAL EDITION) was THX mastered.
WHAT A BLOODY SHAME THAT A WONDERFUL OPPORTUNITY FOR ID4 WAS WASTED WITH THIS DVD!
posted by The Predator on 2/12/2001 15:14