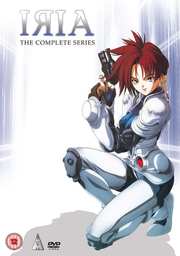 Review for Iria: The Complete Series

Recently I have been watching Grave of the Fireflies, Kiki’s Delivery Service, Dirty Pair Flash, Riding Bean, and the odd Urusei Yatsura movie. The thing these anime have in common is that they are all pushing twenty to thirty years old at this point, which given the prevalence and quality of new and recent anime coming to the UK would seem like a waste of my time. There is something to be said for nostalgia though, but more than that, anime used to be different back then. With the recent downturn in the world’s economy, the anime industry in Japan has retrenched somewhat, started playing it safe, and aiming at its core audience to ensure income. Twenty or thirty years ago, that core audience would have been watching Fist of the North Star, today that otaku demographic wants cute girls and tie-in figurines and life-size huggable body pillows. When yet another new anime wheels out the tsundere and moe stereotypes yet again, I feel my brain begin to melt. 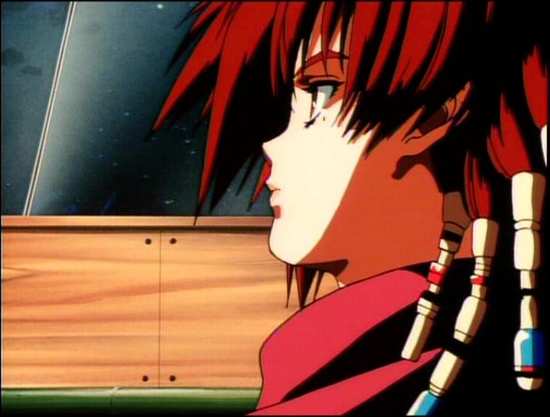 Another thing about anime twenty or thirty years ago was a distinct lack of computer imagery. Animation was made the old fashioned way, with paint and inks on cel acetate. Anime had a living, organic feel to it, filmic and flawed that has a distinct charm, even today. So when MVM picked up a couple of older licences for release in July this year, my interest was certainly piqued. Their first title is Iria Complete Collection, previously released in the US by Media Blasters as Iria: Zeiram The Animation.

Iria is an OVA collection from 1993, a sci-fi series of six episodes that actually serves as a prequel to a couple of live action movies. 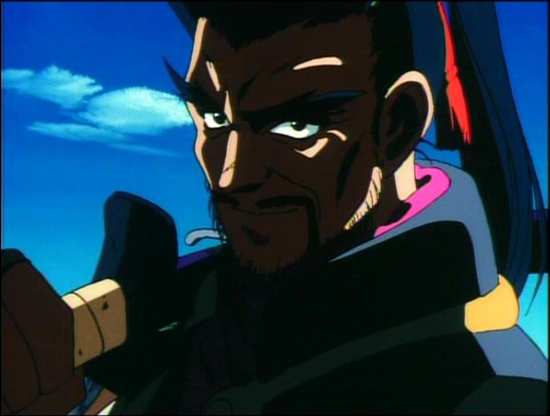 Iria is a bounty hunter, or rather a rookie bounty hunter under the aegis of her brother Glen, and she wants to be just like him, even going as far as eschewing the trappings of femininity for male attire. When Glen gets a mission to help rescue the cargo, crew and passengers of a hijacked spaceship, she tags along. But there is more to this mission than meets the eye. They find a scene of carnage aboard ship, their actual mission is to rescue a key figure in the illicit Zeiram project, and it appears that the immortal, lethal, and beast like Zeiram is loose aboard the ship. In the chaos Iria and Glen get separated, with the Zeiram apparently pursuing Iria. Now Iria has to battle this relentless monster, and find out what really happened to her brother. 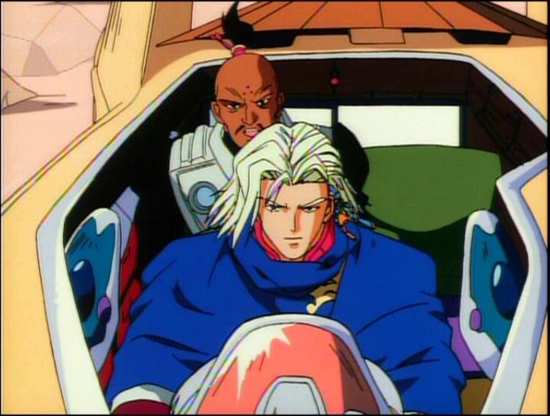 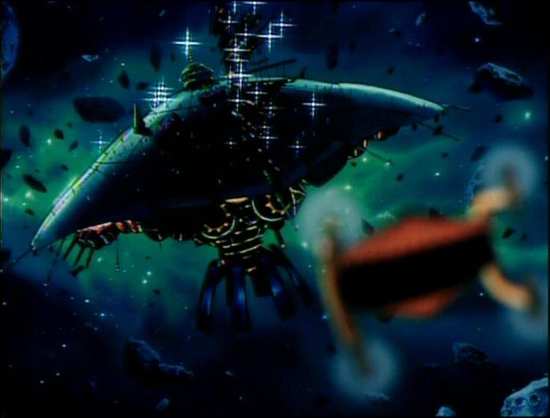 An old school anime gets an old school presentation on this dual layer disc, sourced by MVM from Siren Visual in Australia. The 4:3 transfer is an old style NTSC-PAL standards conversion complete with ghosting and blended frames, although this is mostly visible only when the disc is paused. What is visible throughout though is the vintage of the source material, a lower resolution NTSC source, soft, tape quality, and significantly rainbowing around fine detail. This being a cel-anime, made on film, the potential is there for a Blu-ray presentation, but that would be reliant on how much actual demand there is in Japan, and whether the original studio is willing to invest in such restoration. Until then we have to make do with the same source material that Media Blasters had for their release way back in 2004. Actually it turns out that the original DVD release for Iria was from Image Entertainment in 1998, and given that Media Blasters released their version with extras and a 5.1 Japanese track, while the Image release was, like this Siren sourced disc, stereo with no extras, that goes some way to explaining the vintage of this transfer. 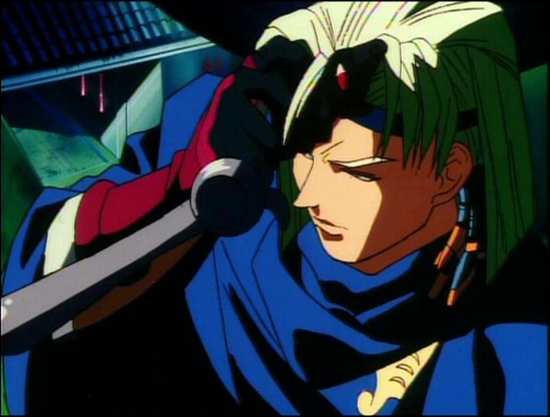 It’s a shame that Iria couldn’t have the same spring-clean that shows like Cowboy Bebop and Revolutionary Girl Utena are receiving these days, as it gets the full-on OVA treatment that the term OVA once implied. A significant budget goes on a cell animation that is of limited length, just long enough to tell its story, rather than padded out to 13 or 26 episodes. This sci-fi story gets a really impressive world design, a well-realised future with all the usual fantastical trappings. The character design too is quite special, with engaging and individual characters, plus a costume style that owes much to South American Indian cultures. On top of that the animation is detailed and fluid. Iria is really an engaging animation to watch. 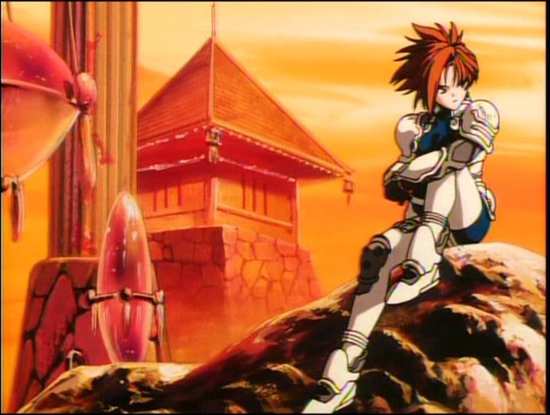 You have the choice between DD 2.0 English and Japanese with optional subtitles and a signs only track. I gave the dub a quick try and, boy were dubs bad back then. This one dates from the late nineties and it makes my teeth itch. The Japanese audio then is the way to go with this title, and the dialogue is clear, the music comes across well, as does the action. 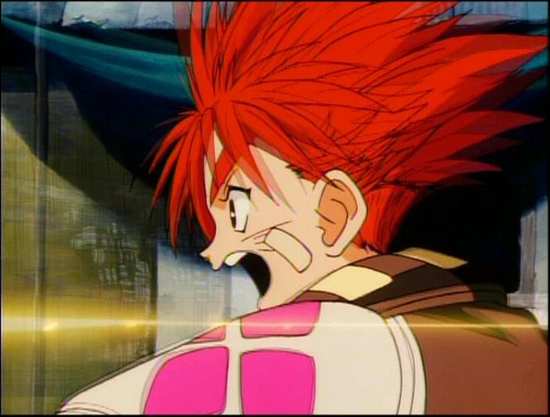 The problem with Iria is with the subtitles. Note for one thing that this is one of Siren’s early titles from 2009, and back then they had a few teething troubles when it came to subtitling anime. The first issue is that for the first three episodes, the subtitles are out of sync. They start off behind the dialogue, drift back in sync as the episode progresses, and then start anticipating the dialogue towards the end. Out of a 30 minute episode, I’d say that 15 minutes has the subtitles synced up to the dialogue. This is a matter of a fraction of a second, and I could live with it, except for one scene at the end of episode 3, where two characters are conversing so quickly that the subtitles flash up for the wrong character. The other problem is that the subtitles can be overloaded when more than two people are speaking at once, as they are limited to two lines on screen, and have a hard time trying to keep up with what’s being said, with new dialogue constantly flashing up and hard to catch. 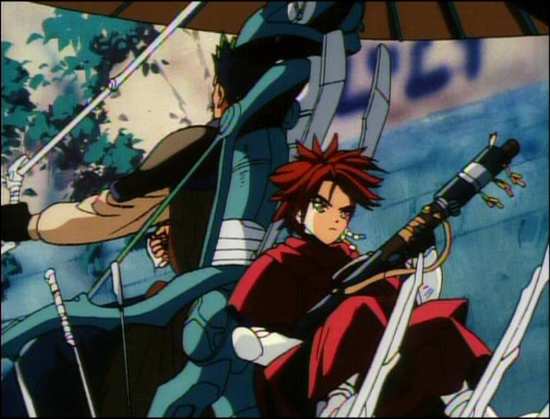 Once again the sync problem affects only the first three episodes, while I only experienced the subtitle overload problem in two hectic scenes.

The disc presents its content with slightly animated menus. There are no extras on this disc, but it has eccentric authoring that I ought to mention.

The run time listed on this site is for the Play All version, and you can guesstimate another 12 minutes on top of that if you watch the episodes individually. 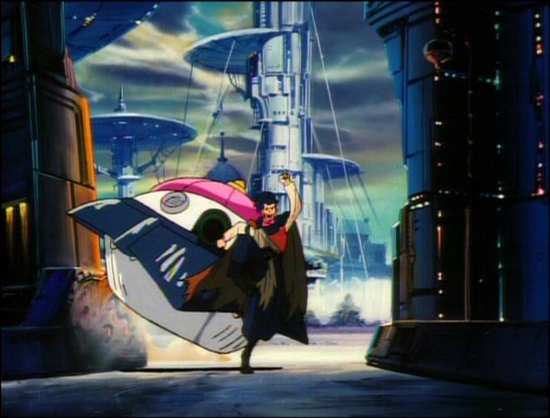 It’s Alien! Zeiram is the Xenomorph, Iria is Ripley, Kei is Newt, and there’s even an evil monolithic corporate entity trying to exploit Zeiram. Tedan Tippedai is this story’s Weyland Yutani. Once that little connection clicks, then the urge to switch off this disc and instead watch an actual Alien movie grows as the series progresses. That’s a shame as Iria: Zeiram the Animation isn’t that bad. It ticks along at its own pace, has some really appealing characterisations, the animation is of high quality too, given the 1993 vintage. It’s just that the script is so pedestrian and predictable that it’s hard not to compare it unfavourably to the superior sci-fi horror movie that obviously inspired it. There’s really just one twist to the story, and that is signposted so early on that it’s certainly no surprise when it comes. 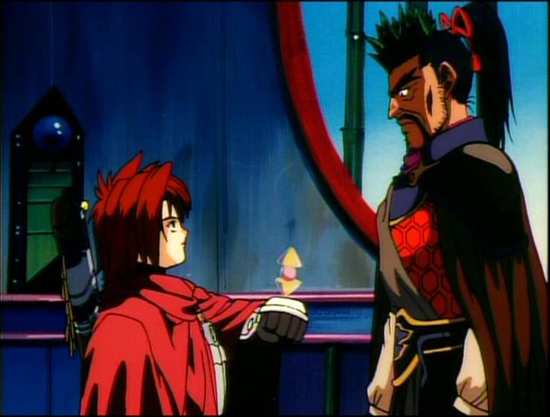 It doesn’t seem that way to begin with, as Iria certainly begins with energy and vitality to its story, as well as a decent bit of intrigue, with Iria’s mentor and brother Glen, and his employer Bob hired to perform a rescue mission on an apparently hijacked spaceship, and instantly coming up against interference from a rival faction within the company that hired them. Rookie Iria tries to help, and winds up tagging along on the mission by default. It’s just that this simple rescue and salvage mission is anything but. The company actually want to retrieve the Zeiram, the ultimate killing machine. The problem with that is that... well... it’s a killing machine. The mission falls apart, and Iria and her brother get separated. The rest of the story follows Iria as she tries to find out what happened to Glen, the secrets that Tedan Tippedai are hiding, and of course revenge against the Zeiram. 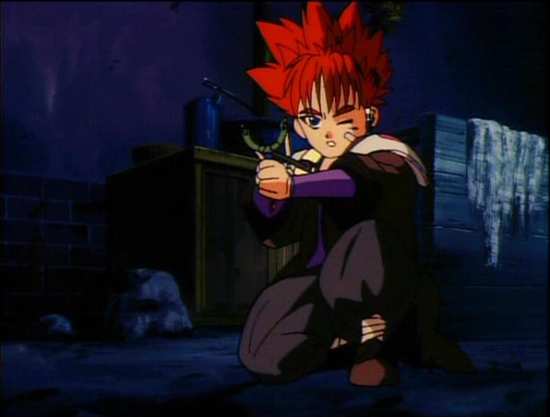 The first problem crops up here as well, as for someone who’s lost her brother, who is most likely dead at the hands of the Zeiram, Iria is pretty cold and unaffected by it. There is a lack of emotion and genuine grief that doesn’t hold true, and it makes investing in her quest in the story hard to do. The second problem is that this really should be a movie, and one that is half the length. By breaking it up into episodes, it fails to hold momentum and build to a rousing climax. Instead it comes in episodic fits and starts that set you back to square one, once every half hour. You then have to build up the suspense and aim for a climactic action sequence once more. 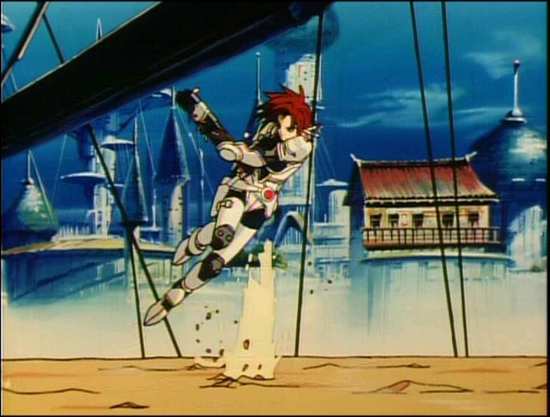 It’s a shame as the ingredients are there for a much better show. The world design is impressive, with Iria getting a detailed and well-thought out retro-futurism that is complex enough to inspire more stories in that universe, and very appealing to explore in the animation. The characters are well thought out and realised too. Other than Iria’s apparent indifference to her brother’s fate, she comes across as a strong, confident female character, much in the same way as the Major from Ghost in the Shell. She’s feminine without having to express her femininity, which gives her even more allure. Another mentor figure/rival is Fujikuro, and he works great as comic relief without coming across as goofy. In the second episode, Iria arrives on a planet and runs into a street-urchin named Kei, and Kei too is a dimensioned and well-realised character, impish and mischievous, as well as loyal and brave. On top of all that, a good deal of effort went into the show’s action sequences, and with Iria possessing more gadgetry than James Bond, the inventiveness here is visually quite engaging. 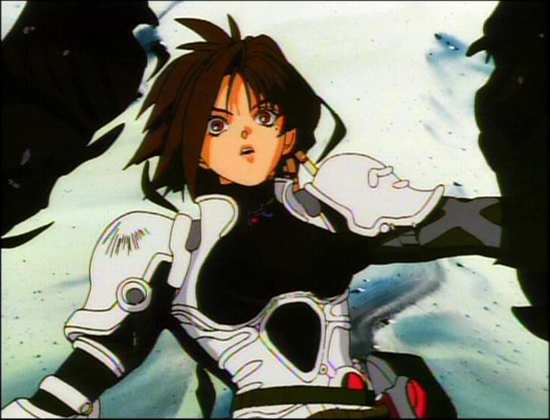 It’s just that the dullness of the story, the predictability of it leads the attention to wander. On top of that the issues with the subtitling are distracting, while the dub is something to be avoided. Iria should have been better, but it is intriguing enough, especially if you’re a fan of the late-eighties, early nineties sci-fi OVAs, to give it a try. It would be better to go in with low expectations though.