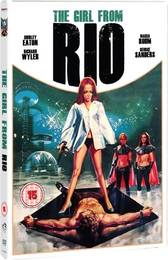 The Girl From Rio (DVD Details)

Review for The Girl From Rio 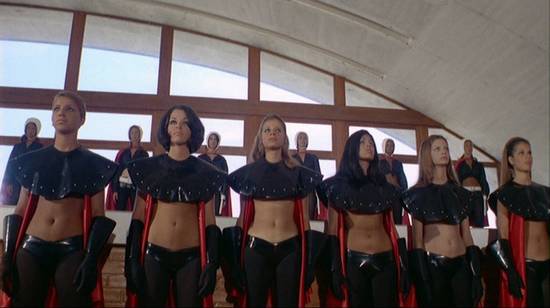 There’s no doubting the decade that ‘The Girl from Rio’ was made. Its pure sixties pop-art comic- strip spy caper from start to finish, full of bright primary colours, mini-skirts, sunglasses and kinky boots. Think ‘Barbarella’ meets ‘In like Flint’ and you’re somewhere near the zone. 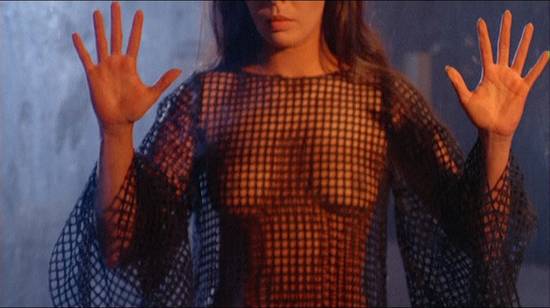 Jess Franco, perhaps more commonly associated with euro-sleaze soft-core, clearly had a blast directing this Harry Alan Towers penned and produced adaptation of a Sax Rhomer original (the man who wrote Fu ManChu). Harry Towers wife, Maria Rohm, is predictably and well cast in one of the female leads, but curiously Franco cast the gorgeous Shirley Eaton in the lead role (Sumitra, the leader of a futuristic city of militant women, Femina). Franco thought Eaton was a fast-rising sex-siren following her brief but memorable appearance in ‘Goldfinger’, though he discovered later that she was in fact a very straight-laced, middle-class British mother. (Indeed, he cut a sexy lesbian scene in to the movie after she had left the set, with a double, entirely without her permission). 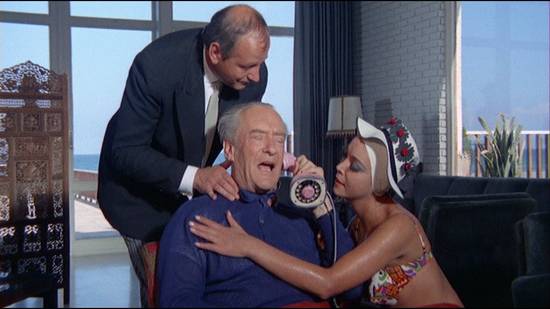 Femina is highly controlled city populated only by a mini-skirt wearing and occasionally topless army of militant women with guns (well, toy guns actually but this is hyper-reality after all). They are ruled with an iron rod by Sumitra, plotting the domination of men by woman on a global scale. Sumitra trains the young women to lure unsuspecting millionaire’s to the island with the intention of stealing their cash. Peculiarly, rather than then merely doing them in (too easy) they are then kept in glass cages as exhibits – a touch of sixties pop-art hyper-realism. 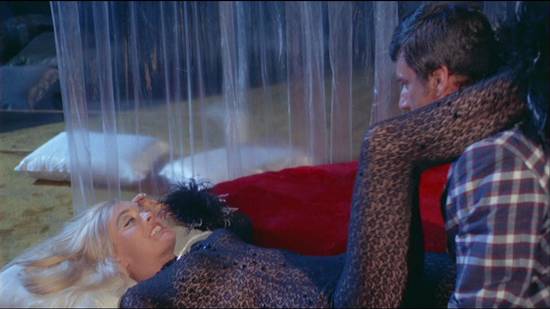 However, when Sumitra kidnaps the daughter of a wealthy businessman, Ulla Rossini (Marta Reves) she doesn’t bank on being hunted down by Bond-like ‘Jeff Sutton’ (Richard Wyler). Sutton swaggers around Rio long enough to give the impression that he has become a man of great wealth - he claims to have ten million dollars from a major heist. This makes him a perfect target for the girls of Femina and the bait eventually works though not before every crook in Rio is also on his trail in a bid to get at his hidden loot. With crooks on his tail from the off, they somewhat confuse an otherwise simple plot though are probably entirely in keeping with a Sax Rhomer pot-boiler. 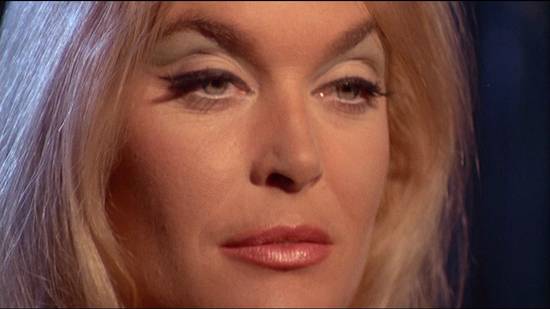 Local master criminal Sir Masius (played with full camp by an elderly but superb George Sanders) wants Sutton’s money but he also has aspirations to relieve Femina of its accumulated wealth too. Sanders is great as the comic reading crime lord who can’t bear to watch any torture being meted out by his cronies – so lots of back of finger biting in a really quite excellent performance which I believe was amongst his last. (Sadly, he took his own life shortly afterwards). 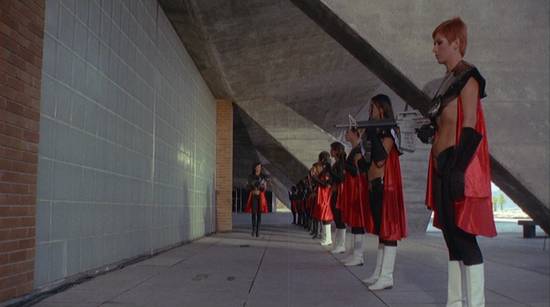 So cue up all kinds of over the top shenanigans including high production value helicopter escapes and even the Rio carnival – despite it falling days after the cast had left Rio. 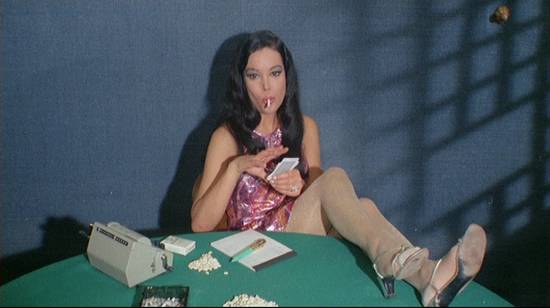 The film is nicely shot and this is a very acceptable transfer with great definition and very few signs (other than during the titles) of wear and tear. Shirley Eaton looks absolutely stunning and the whole movie has a light, don’t take me seriously feel to it.
The cool lounge music score (Daniel White) works perfectly given that this is the swinging sixties and the film is set in bossa-nova capital, Rio. 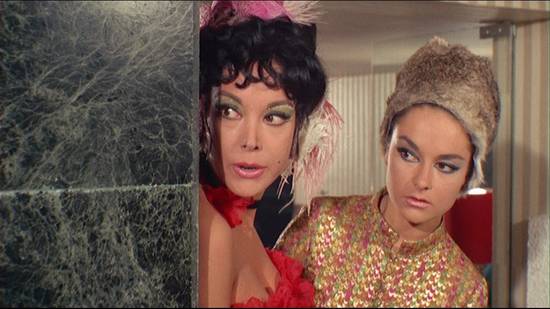 It’s not a great film by any stretch but as a period piece it’s plenty of fun. It also has quite high production values for a Franco film so a lot of great location material to enjoy. It rarely feels studio bound and it has quite a generous cast. Of course, by today’s blockbuster budget standards it may still feel slight but in context it must have been well-funded. 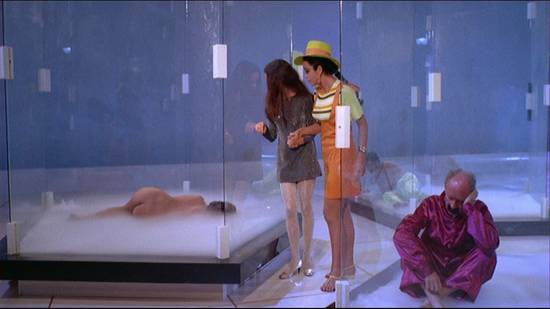 Strangely, as told in the splendid interviews contained on the disc with Jess Franco and Shirley Eaton, Eaton never worked in movies again after this. She had missed her young children and elected to dedicate more time to bringing them up. Despite some happy memories she was also clearly smarting from the sexy footage cut in after she had left set using a double which she (probably quite rightly) felt was a bit of a liberty. 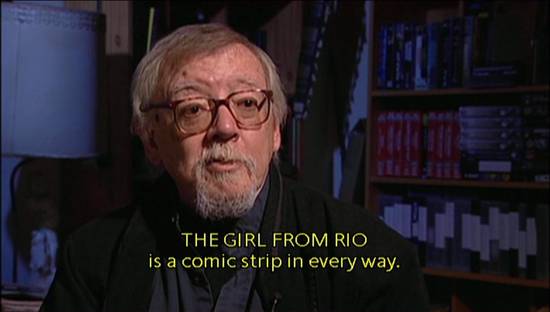 Franco’s interview is fascinating and he clearly enjoyed making the picture. He even spoke kindly of Eaton in an entirely non-judgemental way, accepting that he had mis-understood the type of actress she was. (He was equally sanguine about Christopher Lee’s insistence to never appear in any sexy scenes that involved nude women in ‘The Bloody Judge’). 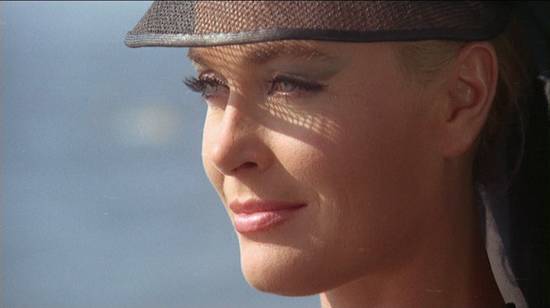 There’s also an interview with Harry Alan Towers which adds detail to how the co-production actually came together.
All in all a fun film for Jess Franco fans and lovers of cheesy sixties spy kitsch. Count me in!