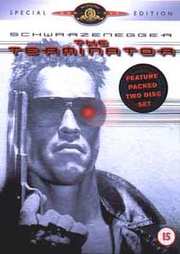 Review of Terminator, The Special Edition (2 Discs)
added by
RWB
Places to Buy 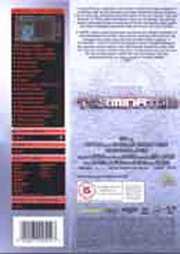 Back Cover of Terminator, The Special Edition (2 Discs)
Related Items

This is a rather controversial disc right now. It has nothing to do with the content, but rather with the quality of the media itself. I was one of the unfortunate ones who was afflicted by MGM`s de-lamination problem (so called DVD rot) and recently received a pair of replacement discs in the post. This of course gave me the perfect excuse to watch the film and the extras disc once more.

The Terminator, made in 1984 is surely a legendary film. Breaking totally new ground when it was first released, it spawned a sequel that was box office dynamite. I must have been twelve years old when I first saw it, on a blurry, indistinct 10th generation VHS copy that was making the rounds of our school, and I was totally blown away. I must have seen it countless times since, in various formats and when the DVD was announced, I made sure that I was there on the day of release.

It`s hardly worth me recounting the story, it has become so ubiquitous in pop culture, but for completion`s sake. In the atomic wasteland of the future, the remnants of mankind battle the machines for survival. Under the leadership of John Connor, they strike a decisive blow against Skynet, the defence mainframe that decided that the human race should be eradicated and engineered the nuclear holocaust. In its hour of defeat, Skynet desperately sends a Terminator back through time to kill Sarah Connor, the mother of John, before he is even born. To protect the innocent Sarah, a sole warrior is sent back after the machine to Los Angeles, 1984. It`s a race against time as Kyle Reese tries to find and protect Sarah Connor, while the Terminator systematically hunts her down, destroying all in his path.

The Terminator is presented in 1.85:1 anamorphic widescreen. It is an amazing transfer, as the film is flawless. There are no signs of artefacts and the image is sharp and crystal clear. The print itself has suffered a little with time and there are a few scratches and blips, the kind of thing that you would expect after 18 years. But this is only noticeable given the quality of the transfer itself. James Cameron`s direction is explosive and sharp and the story`s tension is palpable on screen. This was a low budget feature in 1984, but the effects belie that. Cameron`s economic use of visual effects to tell the story is amazing in this film and as a result they still hold up today. Stan Winston created the Terminator effects and they are still as chilling as when I first saw them. The only downer is the extensive use of rear projection, especially in the flashbacks (flashforwards?) Mostly they are effective but they are on occasion jarringly obvious.

A DD 5.1 mix has been created for this release and it is stunningly effective. The surround effect is very well accomplished as the viewer is thrust into the middle of the action. Cars screeching and bullets flying all around as the chase heats up, and it is an effective device to further increase the tension as the film unfolds. This also owes a great deal to the music of Brad Fiedel. The Terminator theme is as iconic as the film itself and the ominous sense of doom that Fiedel creates with his efficient score is unrelenting.

Terminator comes with a plethora of extras. There is a 4 page making of booklet slipped inside the case. Those of you with a PC can see access three versions of the script on DVD ROM, the original treatment script, the 4th draft and the final shooting script. This final version can be viewed in conjunction with the film. This is all on disc 1, on disc 2 there is far more.

The Making of the Terminator: A Retrospective is a 20-minute informal chat with Arnold Schwarzenegger and James Cameron regarding the making of with reference to their own personal recollections. This was made in 1992 but there is some archive footage of Cameron speaking earlier as well.

Other Voices is the meaty extra on this disc. Another making of documentary, this lasts a full hour and is very in depth and informative. This goes into significant detail and has interviews with basically everyone. There is minor repetition from the previous doc, but this was made in 2000 and uses those clips sparingly.

These two documentaries are in DD 2.0 and 4:3, there are also 7 deleted scenes presented in letterbox format. They are prefaced by text explaining the aim of the scenes and the reasons why they were finally excluded.

Finally there are the trailers. 3 theatrical trailers are presented in 1.85:1 anamorphic format and the 2 TV spots are given the 4:3 treatment. All these extras come with English subtitles.

Finally there are the stills. For those of you without the benefit of a PC, James Cameron`s original treatment also appears in the form of several text pages printed over a piece of Terminator artwork. Speaking of artwork. James Cameron`s original work is presented in a series of 21 stills. There are some 29 production photographs and 20 stills from Stan Winston`s effects and make up. Finally there are 23 stills from Fantasy II visual effects and 14 stills of publicity materials.

Seminal, groundbreaking, iconic, classic, there are only so many superlatives available and they all apply to The Terminator. James Cameron made convention-defying cinema here, which has never been equalled, even in the sequel. Terminator 2 was an almost epic sci-fi action movie with a big budget, but the original Terminator in comparison was made on a shoestring, everything was tightly budgeted and the script was extremely efficient. What resulted was a relentless cyber-thriller that made an indelible impact. The inexorable pace of the film would have been lost with a bigger budget and consequently the sequel seems like a different genre altogether.

Arnold Schwarzenegger is the Terminator. It`s impossible to even consider anyone else in the role. He is quite simply perfect as the efficient machine killer sent back from the future. He brings a subtle malevolence to the role that is understated but enough to give the Terminator enough personality to create the icon that quite rightly made Schwarzenegger a star. Michael Biehn is Kyle Reese and his performance is pivotal to the film. His character is the storyteller, but he while his manic intensity drives the pace of the film, he never overdoes it. Linda Hamilton is brilliant as Sarah Connor, and her transformation from innocent, to victim to soldier is accomplished and convincing. It`s no wonder that with this and the sequel that Sarah Connor is a screen hero to rival Sigourney Weaver`s Ripley. While everyone will recognize Bill Paxton as one of the punks who greet the Terminator`s arrival, Brian Thompson plays the blond haired punk who gets his heart ripped out. Thompson is better recognized for his role in the X Files, as an alien shape shifting bounty hunter who relentlessly hunts down his victims on Earth. Coincidence? I think not.

What James Cameron created is one of the enduring images of modern cinema, The Terminator appearing from within the flames. The story is economic and the film tightly paced. Every scene is charged with tension and the audience can only pause for breath before the chase resumes. In 1984, the threat of nuclear destruction was very real, and this film plays on those fears well. Also the idea of machines taking over the world is one as old as Frankenstein`s monster. This film is hardly what you would consider Hollywood mainstream. The only uplifting moments are those of Sarah Connor`s personal triumph against the machine, otherwise the story is relentless in the inevitable ticking of the clock. Just when you think it is all over, the Terminator rises again and even the last scene is ominous, with the storm clouds descending over the highway, poignantly reminding of the conflagration yet to come. The symbolism of a single road stretching to the horizon with no turn-offs is all too apparent. It took the sequel to bring some hope of redemption, but the original film is refreshing in its negative outlook. The Terminator is still as much of an edge of the seat thrill ride as it has ever been and for me it is still vastly superior to the excellent sequel. Like Spinal Tap, I wish these marks could go up to 11.