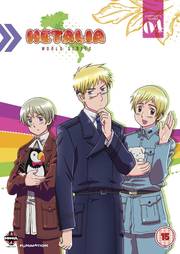 I was actually looking forward to this disc, which given my opinion of the first three seasons and the movie may come as something of a surprise. The thing is that back in July when I reviewed Hetalia World Series Season 3, all that remained to be released was Season 4. I was looking forward to getting it out of the way so I’d never have to think about Hetalia ever again. But then in the intervening months, the announcement came that they were going to make yet more Hetalia in Japan. My nightmare isn’t over just yet! 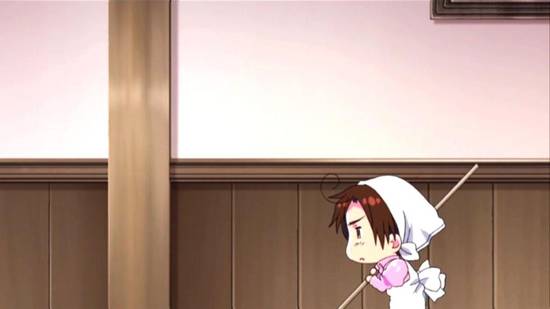 It’s still World War II, and Germany is all set to conquer the world. The bad news is that Italy is his ally again. The good news is that this time he has Japan on his side. With his skills at discipline and efficiency, and Japan’s skills at miniaturisation and inscrutability, they surely can’t go wrong. And Italy has come with a ready supply of white flags. But on the other side there are the Allies, with youthful America dominating proceedings, much to the consternation of England, and of course France annoys everyone, while friendly amiable Russia is secretly planning to stab everyone in the back. These personifications of nationhood relive key events through world history in Hetalia Axis Powers and its sequel series, Hetalia World Series.

All 28 episodes of the fourth and unfortunately not final series are presented on this disc from Manga Entertainment. 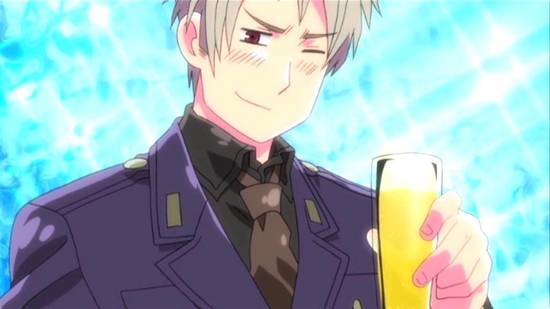 The 1.78:1 anamorphic transfer is an odd bit of betwixt and between. The episode content itself is a native PAL transfer, and you’ll find that the disc’s runtime is a tad shorter than the US disc due to PAL speedup. Given that Hetalia is a cheap and cheerful animation; bright, colourful, and simplistic, it doesn’t make too much of a difference. But still the absence of ghosting, judder and blended frames is a positive, and the anime flows very naturally in this form. Having said that, for some bizarre reason, all of the closing sequences are NTSC-PAL conversions, where you will see all the ghosting and blended frames that are thankfully absent from the episodes. It’s an absolutely bizarre way of doing things, and the only reason I can think of is to avoid the fast paced and high-pitched closing theme sounding even more helium induced. 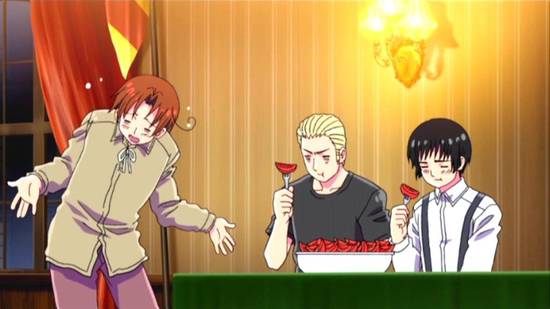 Episode 49 is really the only place in the main programme that you see the result of squeezing so much data onto a single disc, as here for a couple of minutes, the image is of lower resolution, and prone to severe aliasing. Otherwise the image is clear and colourful throughout, with a hint of moiré on finer detail. It is quite soft though, which appears to be a creative choice to reflect the quite childlike and friendly character designs, and the straightforward animation. The Chibitalia segments have excessively cutesy characters, with more of a paint-brushed feel to them. Generally the animation is good enough for a set-up, punch-line format, and doesn’t need to do more. 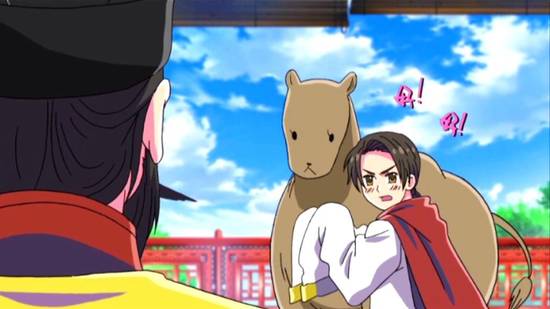 You have a choice between a rather unnecessary DD 5.1 English track and a DD 2.0 Stereo Japanese track, with optional subtitles and signs. I say the English surround is unnecessary as this isn’t the most aurally significant of anime, just an ephemeral gag-fest. I tried the Japanese track first, and found it to be acceptable if unremarkable. I don’t have enough experience of Japanese to know if there are regional accents at play, but the voices are well defined and suit their characters. I then gave the show a shot with the English dub, expecting a plethora of accents to go with the national stereotyping, and hopefully bring out the comedy more. Accents there are, but quality isn’t always apparent, and neither is clarity. I wound up leaving the subtitles on, as some of the accents were impenetrable. That didn’t help much as there were different jokes being used in the English and Japanese versions of the show. The subtitles were clear and error free and you’ll be using the pause button, as there is a lot of on-screen text that is translated and just flies by. 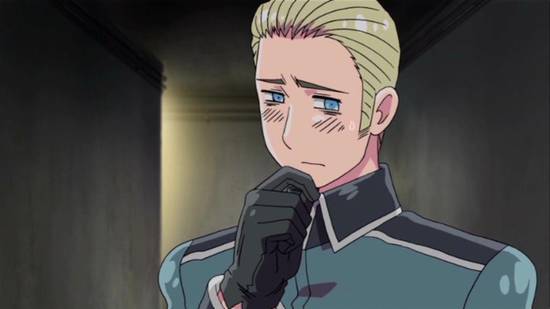 There is a whole lot of extras to go with the series on this final disc, so much so that I have concerns about just how they squeezed it all in. Certainly with 28 episodes taken into account, there’s well over 4 hours of video footage on this disc, which is pushing the limits of a dual layer disc’s capacity. The episodes and extras are presented via static menus, and the disc displays a jacket picture on compatible players when not spinning.

This disc is overflowing with additional material, beginning with five episode commentaries on episodes 26, 32, 36, 41, and 45. 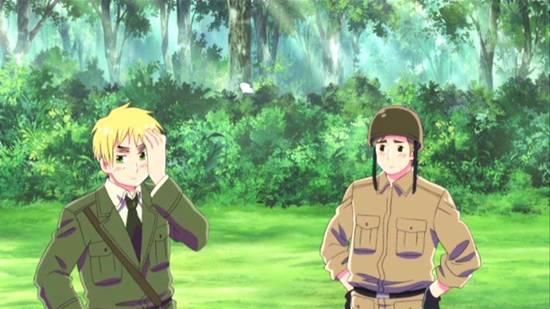 Once again my favourite extra is the Hidden History Hidden Within Hetalia, which has some 100-odd pages of text explaining the historical events referenced in the show. It’s more fun than going to school.

There are six minutes of totally unfunny outtakes.

Four Boys, One Couch lasts 30 minutes, and is an interview recorded at Otakon in July 2011. In it voice actors Scott Freeman (Britain), Patrick Seitz (Germany), J. Michael Tatum (France), and ADR director Scott Seger endure a jovial Q & A about the show, their roles, the memorable moments and the fans.

Chibitalia lasts 16 minutes and is available in English and Japanese, and appears to collect some of the Chibitalia segments across the series and edits them into one coherent story. 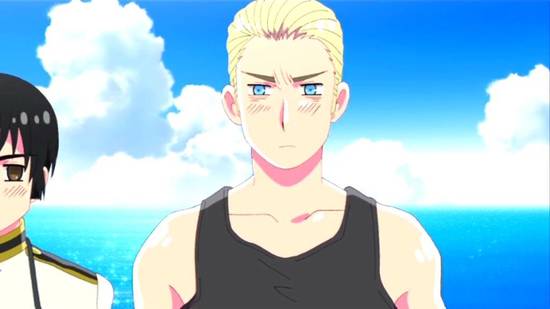 The same is true for America’s Cleaning Storage, which lasts 5 minutes.

Hetalia in Taiwan: Part 1 (11 minutes), and Part 2 (7 minutes) sees Daisuke Namikawa (Italy) go to Taiwan to promote the series and the movie.

The Fan Event in Roppongi lasts 11 minutes and has Masaya Onosaka (France), and Katsuyuki Konishi (America) have fun with a cinema audience.

The Special Talk Between Bob Shirahata and Hiroki Yasumoto lasts 19 minutes. The director and the voice of Germany look back on the series, and answer a few fan questions. 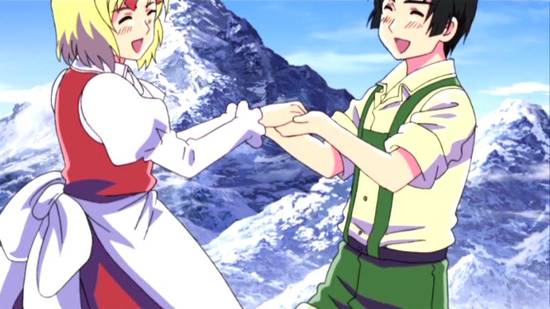 Draw a Circle, That’s the Comment Corner has the Japanese voice actors for Italy, Germany, Japan, and England promote the series and the movie, as well as message the fans in 8 minutes worth of footage.

Interview after the Hetalia Movie Premiere Welcome lasts 5 minutes, and has the Japanese voice actors for the Axis join director Bob Shirahata for a quick informal chat. 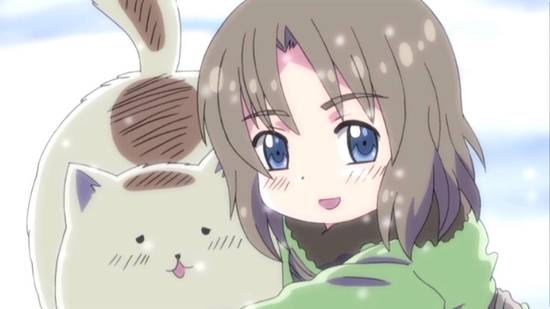 You get the Madman trailer for the series, a 2 and a half minute music video for the first theme song in its entirety, as sung by Italy, and finally you get the two textless credit sequences.

Some of the video footage in the extras is often prone to compression artefacts and pixellation, and over four hours of video on one disc really is too much of an ask. This really should have been a two disc release, as it was in the US. 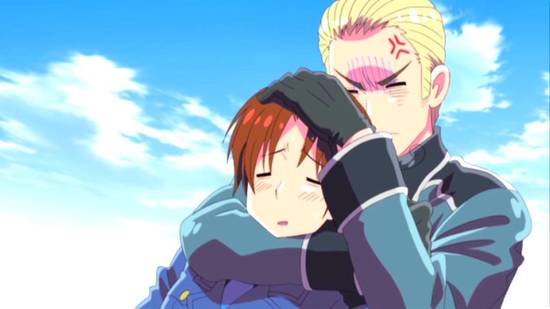 Let’s keep this short. If you like Hetalia, then you are going to love this disc. You get more Hetalia than ever before in 28 episodes, while on top of that you get even more in the way of extras. Over four hours of material on a single dual layer disc takes a bit of squeezing, but it gets here without compromising the quality too much. Hetalia fans will be in Hetalia heaven with this fourth series, and you really ought to buy it now, before you read the rest of my review... 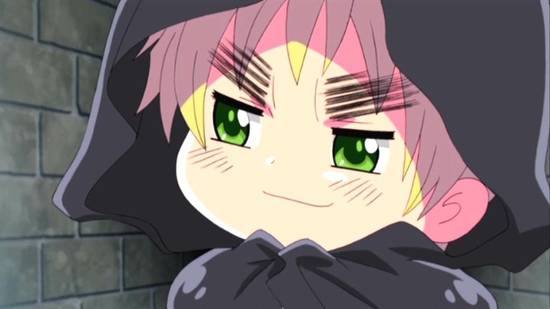 For I am someone who does not like Hetalia. It’s a one joke show that has overstayed its welcome by 3¾ discs, and I no longer see what is funny about its awkward character interactions and daft and clichéd personifications of nationhood. Over the course of two hours and twenty minutes, I managed to smirk a grand total of four times. At less than two smirks an hour, that doesn’t exactly scream hilarious comedy to me. 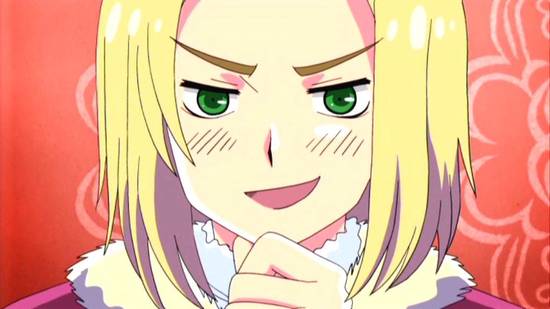 Two things made me smirk in this collection. One was Nekotalia, which has all the nations of the world re-imagined as cats. The other was England being captured and having to escape Italy by blending in. Japan yodelling with Switzerland had my lips twitching in an upward direction, but a full-blown smirk was not forthcoming on that occasion. And it turns out that Hungary is a transvestite. 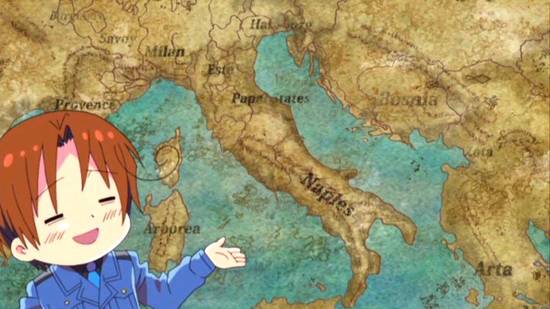 I may give Hetalia another try, as the English dub is a completely different comedic experience from the Japanese. The thing is that the one time I tried the dub, I couldn’t understand a word they were saying... excuse me... screaming. As usual for a comedy anime dub, the dubbers mistake loudness for comedy, and mistakenly believe that the louder they shout, the funnier they are. I had to turn on the subtitles, which actually translate the Japanese dialogue, which renders the dub useless to me. 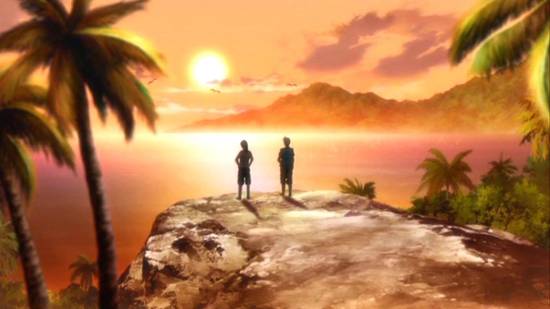 Actually forget it. I said this about volume 1, and I’ll say it again here. If you want to see national stereotypes used aggressively for WW2 era humour, invest in ‘Allo ‘Allo on DVD instead. That actually is funny, viz ze Fallen Madonna viz ze Big Boobies by Van Klomp!