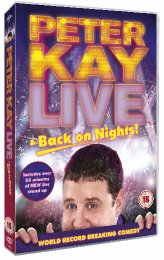 DVD
Frankie Boyle: If I Could Reach Out Through Your TV and Strangle You I Would
Related Articles

Peter Kay Live and Back on Nights is the follow up to the biggest-selling stand-up DVD of 2011, “The Tour that didn’t Tour Tour”. That DVD just contained a slightly cut down version of the live show of the same name, and no extras. Now, Peter Kay is back with “even more brand-new live comedy” taken from his world record breaking eighteen-month tour across the UK.

This is a film that mixes clips from different shows from that same tour and behind the scenes footage of life on the road, as Peter reveals how he created this mammoth tour, playing 140 shows to 1.2 million people, and how some of the routines developed. There are clips of interviews on the Jonathan Ross show, BBC North West Tonight and other bits and pieces.

It claims that it “includes over 55 minutes of new live stand-up” - more on that story later. 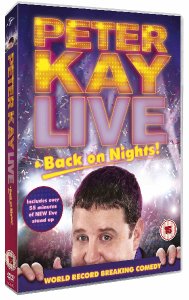 Can’t really say as there was no DVD to review, just a streamed file on a web site which had three separate copyright notices splurged across the middle of it. Reviewers cannot be trusted! This is why there are no screen shots for you here either.

Apparently there’s a “Special non-swearing mums version included on the DVD and Blu-ray”...

Seven years ago, I moaned about another pair of Peter Kay stand up DVDs. The “Live at the Manchester Arena” DVD contained a cut down version of the “Live at the Bolton Albert Halls” show (albeit filmed elsewhere), along with all of the extras that should have been on the “Albert” DVD.

It’s happened again. Last year’s “The Tour that didn’t Tour Tour” contained a (less cut down) version of that show, and no extras. This year we get “Live and Back on Nights” which is essentially a 90 minute documentary that should have been an extra on last year’s DVD. It claims to contain “over 55 minutes of new live stand-up”, but I think that’s far too bold a claim. There are different versions of some of the routines from last year’s DVD, and there are other bits that definitely didn’t appear, as they were taken from different nights in different cities. But this isn’t really a stand up DVD. It’s a documentary, mixing stand up and behind the scenes stuff.

It’s certainly enjoyable, but it should have been on last year’s DVD, not a whole DVD in its own right.

When it goes cheap in the January sales, it’s worth picking up as “disc 2” to add to last year’s DVD to make a 2 disc set. If you can buy them both together for a tenner, it’s good value. But to buy this on its own for fifteen pounds now (possibly as an Xmas present) is a total rip off.