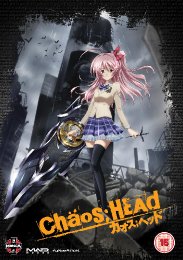 The semicolon is really big in anime right now. Of all the punctuation marks around, it’s the high-up full stop and low-down comma in combination that are getting people most excited. I used to shiver at the thought of videogame adaptations in anime (I still do in live action features), but there’s something about the anime medium, as well as the story-heavy videogames that come out in Japan that really work well together. Shows like Rumbling Hearts, Disgaea, and Gunparade March, have all brought games to animated life and have done so with a great deal of success. The Key Visual anime that we in the UK are finally getting and which for years have made fans quiver in delight, are all based on dating simulations. 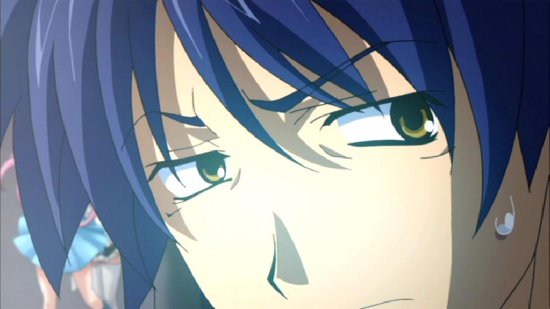 In recent years and months, it’s been the games of Nitroplus that have taken the anime world by storm. They’ve already had established success with shows like Fate/Zero, and Phantom: Requiem for the Phantom, but recently they’ve put a sci-fi twist into the visual novel that has attracted a whole legion of fans, and they seem to be going from strength to strength. The big title of the autumn season 2012 looks to be the forthcoming Robotics;Notes, but there’s a big part of me that wishes that I was reviewing last year’s smash hit, Stein’s;Gate. That’s only just being released in the US now, and will come to the UK eventually, although I hope its release isn’t dependant on the success of the first Nitroplus semicoloned game to be adapted into anime, which I now find myself reviewing, Chaos;Head. 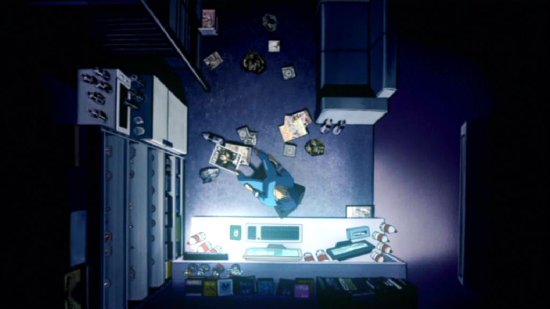 Takumi Nishijo is a boy with a problem. Actually he’s a boy with several problems, not least of which is that he’s an antisocial recluse who prefers playing videogames and watching anime to interacting with the real world. He lives alone, away from his family, in a converted container atop a Shibuya high-rise, and he makes sure that he maintains the minimum attendance for high school, and nothing more. The only contact with the real world is the occasional visit from his sister Nanami, trying to keep him in touch with reality. What’s more is that he’s got mental issues as well, he’s delusional, and his favourite videogame character Seira is more real to him than anyone else. 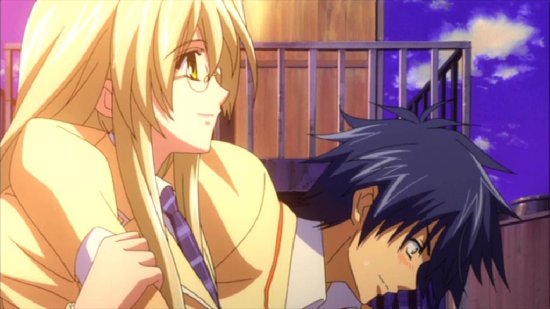 But the real world is about to impact his reclusive existence in a big way, when the New Gen incidents start occurring, mysterious and chilling crimes taking place in Shibuya. When he visits a BBS board online, he gets a preview for the next incident from a user named General, a picture of a particularly gruesome murder. The next day on the way home, he encounters that very same scene and the perpetrator, a pink-haired girl with blood still on her hands. When he goes back to school, she’s sat right next to him in class, and while he had never seen her before the crime, apparently everyone else knows that they’ve been friends since they were little kids. Rimi’s not the only strange girl in his life now; there are a whole bunch of strange girls getting involved with him. There’s a singer named Ayase, a mute girl named Kozue, Yua, a stalker who’s convinced he’s the one responsible for the New Gen crimes, and a dark haired girl named Sena who’s carrying a large sword through Shibuya that only he can see. The very fabric of reality is being torn apart, and it all revolves around Takumi. 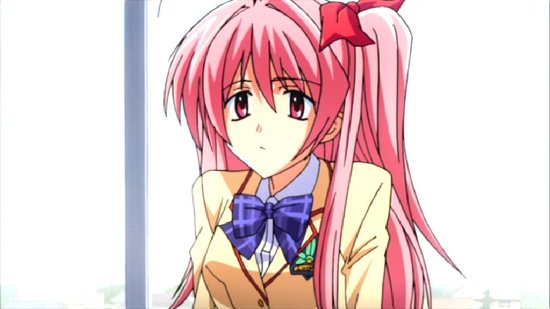 All twelve episodes of Chaos;Head are presented across 2 discs by Manga Entertainment. 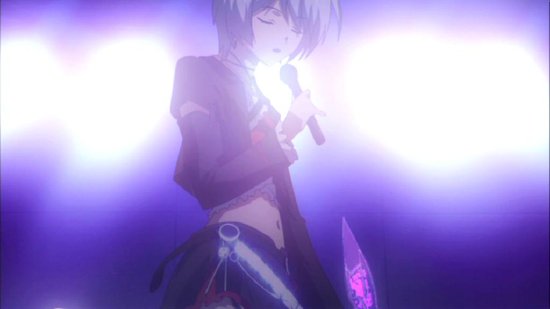 Chaos;Head got a Blu-ray release in the US, but we’re only getting it on DVD here. Frankly, I don’t think that the Blu-ray will be missed all that much, as while the show’s 1.78:1 anamorphic image is clear, sharp and colourful throughout, this isn’t an anime that pushes the limits when it comes to detailed art and complex animation. Chaos;Head is cheap and cheerful, with bland, generic character designs, and simple world designs wholly lacking in detail. The animation too is really quite limited in comparison to the majority of modern anime, and the bright primary colours do nothing to enhance the mood of the story. This is supposed to be a tale of twisted realities and the darker nooks and crannies of the human psyche, but it looks more like a rom-com harem anime. 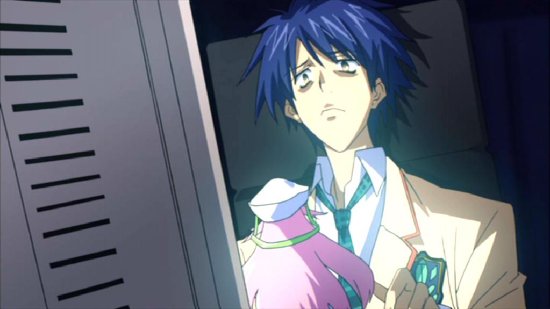 You have the choice between DD 5.1 English and DD 2.0 Japanese, with optional subtitles and a signs only track. Both audio options are fine, with the surround edging it in terms of bringing out the action sequences, if it is still pretty front-focussed, while the stereo Japanese track was my preference in terms of voice actor performances. The subtitler could have used a thesaurus as some of the word choices were questionable, the sense in which the word ‘deluded’ was used didn’t fit the context of the story. Another thing is that the text caption translations were oriented to overlay and mirror the Japanese text, which made reading them quickly enough nigh on impossible without skipping back and pausing. Otherwise the subtitles were accurately timed and free of obvious typos. Also, the insert songs are dubbed for the English version. 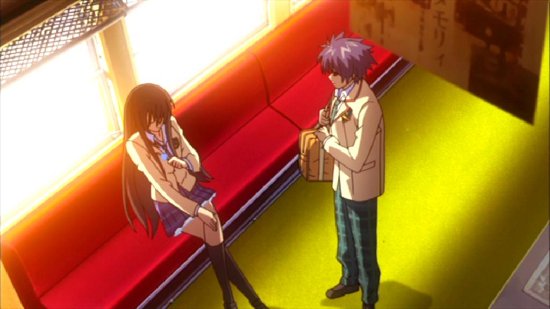 Static menus, jacket pictures for when the discs aren’t spinning in compatible players, and textless credit sequences on disc 2.

I really do hope that the eventual release of Stein’s;Gate isn’t dependent on how well Chaos;Head performs. Stein’s;Gate has got a great story, brilliant characters, excellent animation, and enough time in which to develop its compelling concept to please a fan of cyberpunk sci-fi. Chaos;Head too has a compelling concept, but it has none of the other things. The story is weak, the characters are generic and forgettable, the animation is cheap and doesn’t do justice to its concept, and there isn’t enough time in its twelve episode run to properly develop it anyway. In fact, rather than develop its core idea to a decent level, Chaos;Head keeps throwing idea after idea at the screen. It’s one almighty info-dump of a show, an ‘everything but the kitchen sink’ story hoping that something might appeal to a viewer, but failing by completely over-egging the pudding. 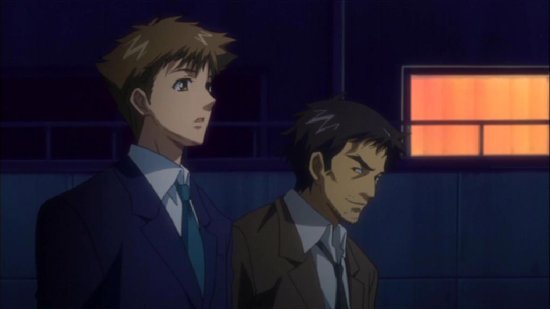 If this wasn’t enough, it’s also one of the shows that I’ve been discussing in recent reviews, that obviously was put together by committee to check certain boxes on a fan-service clipboard. This is a show that has to have elements that appeal to a majority target demographic, that gets them off their bean-bags, buying DVDs, Blu-rays, soundtrack CDs, poseable figurines, and character pillowcases. So we have a central cipher, teen male character, that all the girls are attracted to, despite the fact that he’s a total loser, social recluse dropout. Naturally he likes videogames and anime. There’s a mascot character, the girl he hallucinates. There’s a cute and wholesome pink-haired girl that he’ll obviously end up with, there’s the loving little sister, the moe soft girl who’s lost her voice, the mysterious damaged pop-idol, the blue-haired tsundere, and the comedy stalker. Of course we’re going to have to devote some of the run-time in developing the back-stories of this cyberpunk harem, which detracts from the overall story. 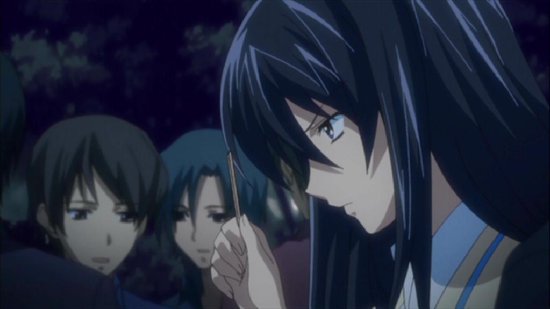 That story could have been good. After all, cyberpunk tales of subjective reality have been drawing in the crowds for ages, both in print and on screen, and Chaos;Head heavily alludes to the Matrix in its jargon and buzzwords. Once again, the problem is that it just keeps throwing information at the screen, exploring new concepts and ideas, mistaking quantity for complexity. This has the effect of masking that which is important, to the point that we only encounter the show’s antagonist halfway through the run. Even up to the final episode, we’re still getting new information, the rules of the world keep on shifting, and long before this point I had ceased caring about the story. I’d never even warmed to any of the stereotype characters, which left me in a poor position to warrant giving Chaos;Head a chance. The one interesting aspect to the show, the only twist that really mattered in the narrative, was signposted so early on that it didn’t surprise in the slightest. 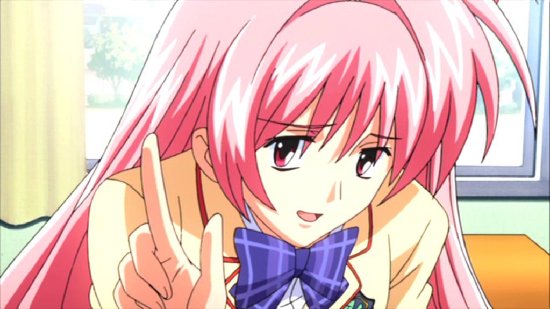 If you want a decent cyberpunk thriller, about technology, subjective realities, with complex and well thought out ideas and concepts, then get Serial Experiments Lain. It may be ten years older than Chaos;Head, but the animation’s better, the story is engrossing, and there’s none of that designed by committee nonsense that turns Chaos;Head into just another disposable 5 hours of poorly animated fan-service.
﻿

Serial Experiments Lain! You just reminded me how good that was. I must watch it again...
posted by Stuart McLean on 15/10/2012 21:18
The Japanese have remastered it for Blu-ray, and Funimation are about to release Lain on Blu in the US, and it's supposed to look spectacular! I hope it's a region free release, or that it gets a Region B release in the near future as it's one show I wouldn't mind double dipping on.
posted by Jitendar Canth on 22/10/2012 18:41
It does seem to represent a 'defining moment' in the genre. I'll dig out the DVD's one more time before considering an HD upgrade. Does sound tempting though!
posted by Stuart McLean on 22/10/2012 19:21