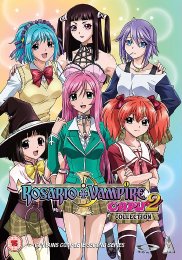 The first season of Rosario and Vampire combined a harem comedy with some supernatural antics to offer a very crowd pleasing, fan service anime, the sort that appeals to the core demographic of anime fans in Japan, and isn’t too disagreeable outside of Japan either. It did bring some unfavourable comparisons to the source manga though, as it lacked bite in comparison to the material it adapted. Now MVM bring us Rosario and Vampire: The Second Season, a.k.a. Rosario and Vampire Capu2, hot on the heels of the first, and fans of the manga will probably be even more disappointed. That said, at least there’s no need to compare the two anymore, as the second season of Rosario and Vampire decidedly does its own thing. 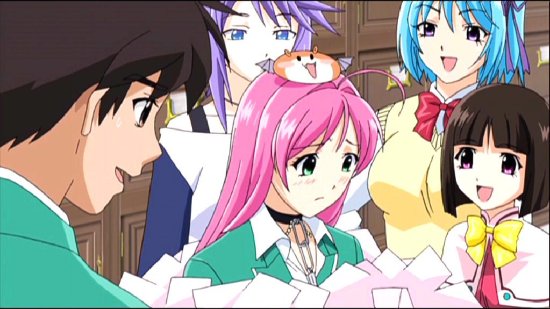 Tsukune Aono is a failure, not to put too fine a point on it. He’s at an age where he should be graduating middle school and preparing for high school, except that he’s failed all his entrance exams. While his friends get to partake of all that high school life has to offer, he’ll have to repeat a year. That’s until his parents come up with the answer. They’ve found a school that’s willing to accept even a low flier like him, and soon he’s on the bus to the Yokai Academy boarding school. The warning from the bus driver wasn’t enough, passing through a tunnel from the bright shiny outside world into what looks like a Hammer movie ought to have been a hint, but Tsukune actually made it into class before the truth sank in. He’s in a high school for monsters, where as well as the normal lessons, the monsters learn how to fit into human society without giving themselves away. And while co-existence is a laudable goal, there still aren’t any humans allowed in school on pain of death. 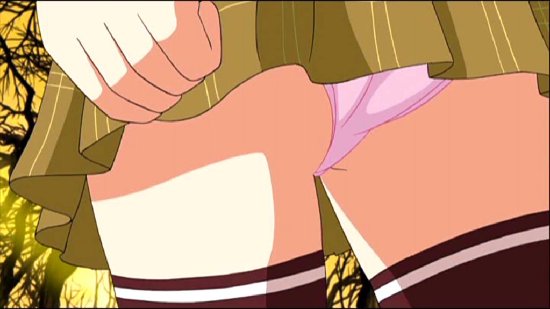 By this point it’s already too late for Tsukune, as he’s already bumped into a cute girl. Moka likes the way Tsukune smells, and is keen to give him a hickey or two. Okay, so she draws a little blood... more than a little... she’s a vampire. But she likes Tsukune because he accepted her without judgement, and also he’s the first friend she’s had. She’s also the cutest thing in school, which causes no little jealousy among the male student body, and soon a whole herd of monsters want Tsukune’s blood, and not in the sexy Moka way. If that isn’t all, the cute monster girls in school also get the charm of Tsukune, wimpy though he is, and want in on the action, and soon he’s got to fend off the advances of a busty succubus, an abominable snow babe, as well as a loli witch. Fortunately Moka is there to defend him, as when he pulls the Rosario off the chain around her neck, her full vampire powers and personality are unleashed. Now all he has to do is keep his humanity secret in a school full of monsters that hate humans... simple. 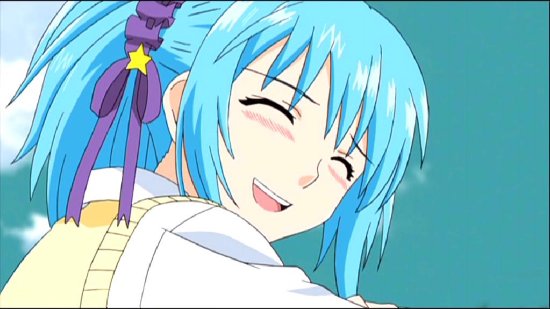 The second year of high school brings whole new problems for Tsukune, as Moka’s younger sister Kokoa starts school. She’s been missing her sister painfully, that’s the silver haired badass Moka. As for all smiles and niceness pink-haired Moka, Kokoa actually wants her dead, blaming her for taking her real sister away, and Kokoa also has it in for all of pink Moka’s friends. Of course being a vampire, Kokoa has a hankering for human blood, which sort of makes her relationship with Tsukune a love hate one as well. 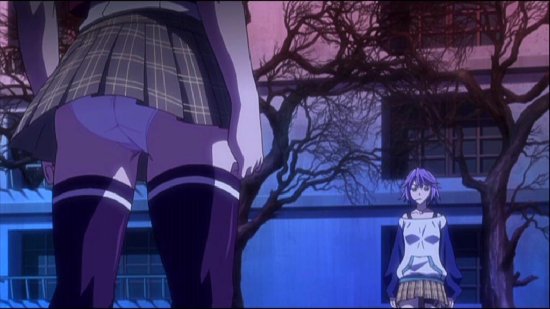 Thirteen episodes of Rosario and Vampire Season 2 are presented across two discs by MVM. 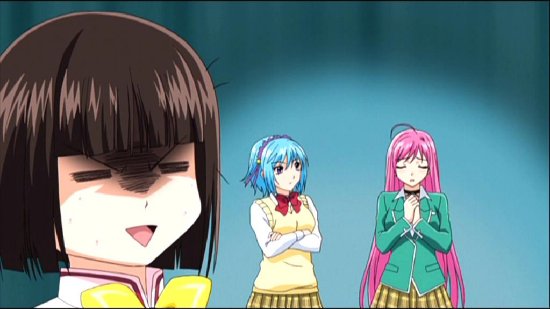 Rosario and Vampire gets a rather middling 1.78:1 anamorphic transfer courtesy of Australia’s Madman Entertainment. Unlike the first season, it’s a pure native PAL transfer, with none of the odd moments of blended frames and ghosting that had me scratching my head. Rosario and Vampire Capu2’s transfer is clear, smooth, and brings across the animation without such artefacts. That said, it still looks like a lower resolution and softer anime than what we have been used to of late, and is a tad disappointing in that respect. 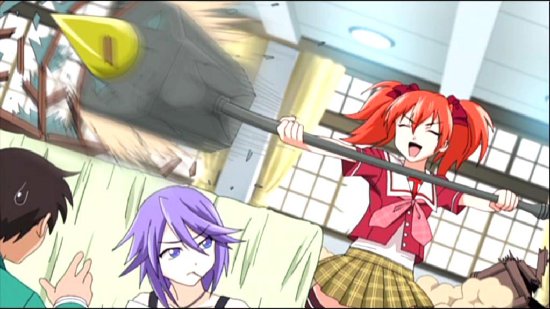 Actually, old-fashioned is the key word when it comes to evaluating Rosario and Vampire, as it looks like a show ten years older than it actually is. The character designs and world designs are decidedly limited, with simple colours, outlines and low on detail. The animation itself is fluid enough, but never really approaching what I’ve come to expect from studio Gonzo. For instance, close to mid range scenes show the detail in the character animation, but should they be in the background of a scene, the detail vanishes far more quickly than you would expect it to given the modern HD age. 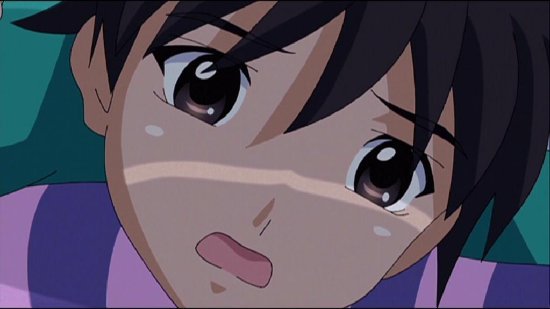 You have the choice between DD 5.1 English and DD 2.0 Japanese, with optional translated subtitles and a signs only track. I went with the Japanese audio, and found it to be a rather quaint audio experience, once again very reminiscent of older anime. The dialogue is clear enough, with plenty of catchphrases, and the whole gamut of cutesy girl voices, and it’s the first anime in quite a while that I’ve seen that makes obvious use of insert songs during the show, very early 2000’s in style. The English dub is the usual Funimation comedy dub effort, which for me is a taste that I am yet to acquire. But the 5.1 mix does give the show a bit more space than the original stereo audio. 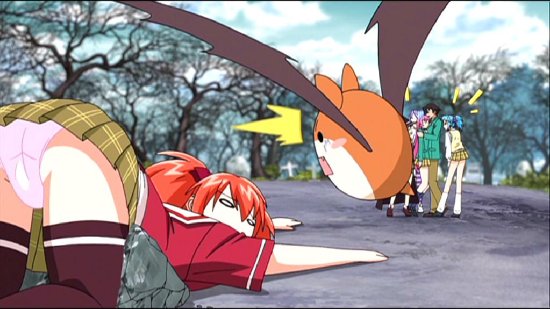 A minor issue with this second season release of Rosario and Vampire is the placement of the subtitles on disc 1, which is about a quarter way up the screen, a tad high, and which on occasion does obscure the action. Disc 2 is fine in this regard.

Both discs get static menus, and jacket pictures to look at when the discs aren’t spinning (in compatible players).

The extras are all on disc 2, and amount to the textless credits. You get the DVD opening and the closing, as well as the on air closing (which has extra nudity obscuring shadow). There are also trailers for Rozen Maiden, Mahoromatic, and Fate/Stay Night.

I didn’t expect to, but I actually missed the Panty Montage as in season 1, and wound up skipping back to watch the next episode previews all in one go, just to get the same effect. 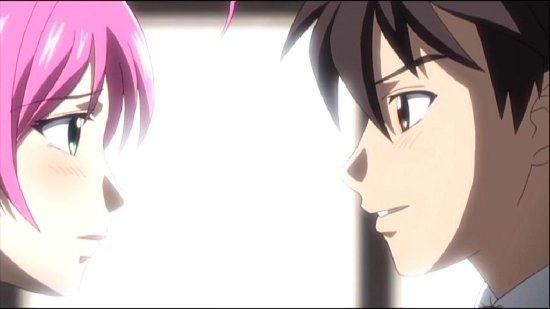 Let’s get the disparagement out of the way first. Rosario and Vampire is still just another harem anime, with a hapless teen male surrounded by a bevy of teenage beauties, all lusting after him to an embarrassing degree. And like too many harem comedies, it lacks heart, emphasising the various relationship shenanigans to the point where it fails to develop the central pairing, leaving the viewer uncaring of its protagonists. Even Love Hina managed to get you caring about Keitaro and Naru, and for many anime fans that show has aged particularly badly. Rosario and Vampire came off the production line looking ten years older than it actually is. 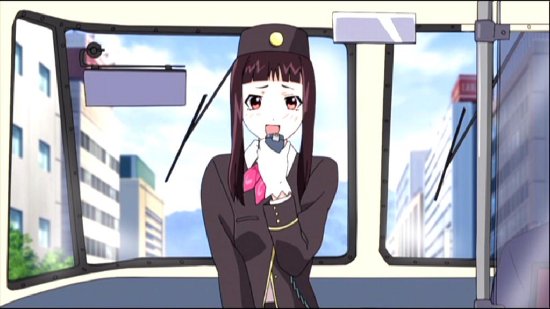 It also neuters all that is appealing about the manga, forgetting for the most part the monster and supernatural aspects of the story, in favour of a typical high school comedy, with an element of spookiness requiring the appearance of silver Moka at the end, delivering a panty revealing high kick to a nominal villain before restoring the harem status quo. This season appears to divorce itself completely from the manga by introducing Kokoa, Moka’s half sister, who becomes a rival to Tsukune for Moka’s affections. But while Tsukune loves pink Moka, Kokoa wants silver Moka, which would require permanent disposal of the rosary. Kokoa’s the appealing brat in the series, the Sara McDougal of the show, initially annoying but gradually becoming likable as she gets to interact with the regulars. 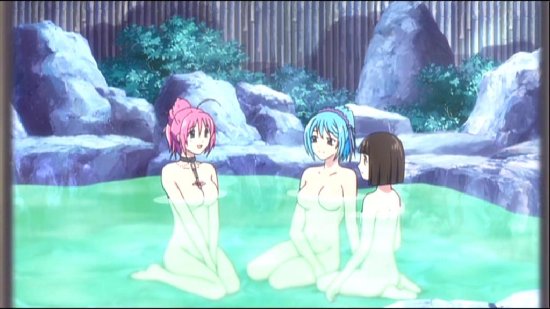 The problem is that it’s a messy divorce from the manga, and every other episode a storyline will appear that is adapted from the comics, but loosely so, and just when you get used to the anime doing its own thing, you get reminded that the manga did it better. Also, what I found best about the manga, the consequences of Tsukune living in the monster world, are never explored in the anime. That’s until the final episode of season 2, where an ongoing manga storyline is thrown in as a disposable Deus ex Machina for a couple of scenes, which again reminded me that the manga does it better. 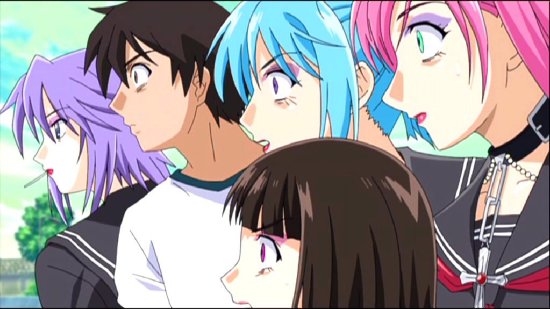 That’s the disparagement done with, and I forgive Rosario and Vampire Capu2 its sins (Capu2 is apparently onomatopoeic for the sound a cute Japanese vampire makes when she’s biting your neck and sucking your blood). It’s mediocre, average, middle of the road, just another harem comedy... and it’s fun. It hits all the clichés, remains faithful to every stereotype of the genre, but does so with energy, passion, pace and a grand sense of humour. It knows just who the target audience is, the older male with disposable income, who wants the show, and the tie in merchandising, and it makes sure that every teenage female in the show will flash her underwear. All the girls will lust after Tsukune, the personality free cipher that represents the male viewer. And even more than the first season, this season is filled with sexiness, random nudity, and compromising situations. Boobs will be groped, butts will be fondled, and noses will bleed. If a random girl falls over with Tsukune, gravity will ensure that his head will end up between her legs (It worked for Michael Douglas in Romancing the Stone). 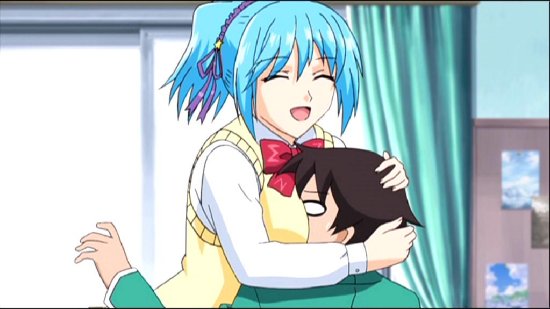 Best of all, Rosario and Vampire isn’t ashamed of its naughty nature. It doesn’t do a Strike Witches and stick a random bar of censorship over certain naked bits, unless it’s the TV broadcast version. You can see the difference in the textless end credits in the extras. If this were Strike Witches, there would be a lightsaber over that scene. 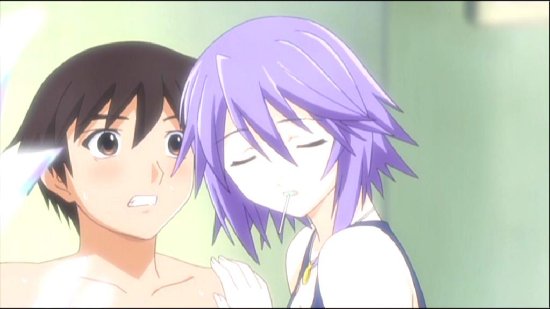 Rosario and Vampire Capu2 actually ups the ribald sauciness compared to the first season, and that actually makes it more fun. Random acts of nudity and sexual inappropriateness and awkwardness do much to distract from the fact that this isn’t the manga. As a result I enjoyed the comedy in the second season a lot more, and was glued to the screen for the duration of the run. I normally set myself a ration of two episodes a night when I’m reviewing, so as to let everything sink in. I wound up watching three episodes of Rosario and Vampire in a row without even noticing. Rosario and Vampire works best when it’s doing its own thing rather than adapting the source material, and that happens a lot more in Capu2. That it is such fun, makes up for all of its shortcomings.