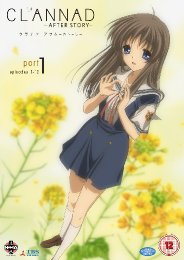 Review for Clannad After Story Part 1

You probably thought that the emotional manipulation, angst and bittersweet romance and tragedy had come to an end with the final instalment of Clannad. It turns out that that’s only half the story, or to put it more appropriately, the Before Story. While Tomoya and Nagisa may have worked through some of their respective issues, and more importantly dealt with the heartbreak in their school friends’ lives, there’s still the mystery of one girl and her robot, and a couple of loose ends that need tying up, and it may just be that what came before was just a light shower of tragedy and angst. Compared to that, Clannad After Story could be a full blown typhoon. 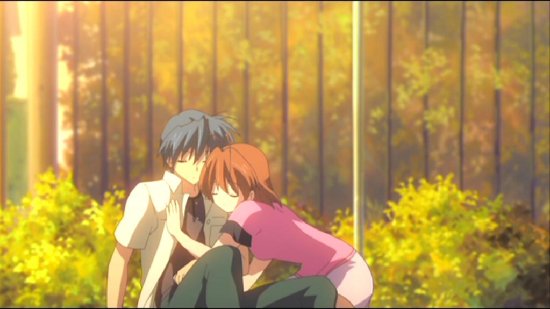 Tomoya Okazaki is a young boy with a dark past. His relationship with his alcoholic father has degenerated into total non-communication, and this has affected his school life to such a degree that he’s considered a delinquent, along with his best friend Youhei Sunohara. Delinquency in this case means just going through the motions at school, turning up because there is nothing better to do, and spending the day staring aimlessly out of the window. His life begins to change however when he meets something of a kindred spirit. Nagisa Furukawa is also an outcast at school, although in her case it’s not through choice. She’s been ill for the past year, and is now repeating her classes. Shy and timid, she hasn’t made any friends in the new school year, and hardly anyone is aware of her existence. But chatting to Tomoya helps her open up, and she reveals a passion for drama. When Tomoya decides to help her reopen the school’s drama club, it sparks off a chain of events that leads him to meet some very remarkable girls at school, and come face to face with some unsettling mysteries. 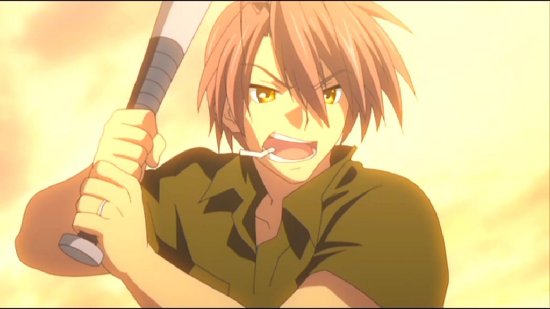 As the second semester begins, it seems that Nagisa and Tomoya’s life is continuing down what looks to be a destined happy road, and the only problem they have is sorting out Youhei Sunohara’s relationship with his sister Mei...

The first twelve episodes of Clannad After Story are presented across three discs.

Disc 1
1. A Farewell to the End of Summer
2. In Search of False Love
3. Hearts Out of Sync
4. With the Same Smile as That Day 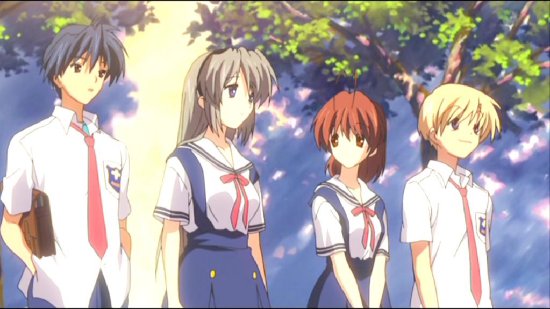 Disc 2
5. The Season You Were There
6. Forever By Your Side
7. Where She Belongs
8. A Courageous Battle

Disc 3
9. Along the Path
10. A Season of Beginnings
11. The Founder’s Day Festival Promise
12. A Sudden Happening 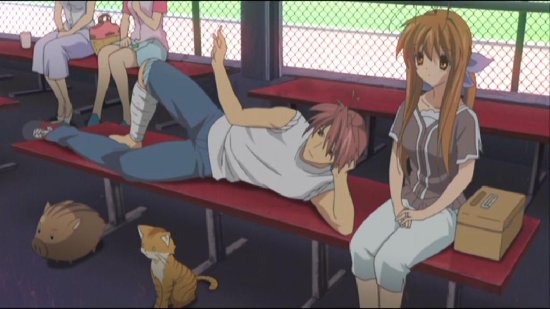 Just like the first series, Clannad After Story gets a 1.78:1 anamorphic transfer, which courtesy of Australia’s Siren Visual is a native PAL transfer with the 4% speedup that implies. The image is clear and sharp throughout, the animation is smooth and free of compression artefacts, and watching these episodes I had no cause for complaint. The animation is gorgeous. If you’ve seen any anime from studio KyoAni, such as The Melancholy of Haruhi Suzumiya, then you’ll know how much effort they put into creating consistent and appealing world and character designs. Just like Key/Visual’s Kanon before it, Clannad After Story too creates and idealised, warm and sympathetic world, using colours, light and atmosphere to draw the viewer in, and filling the world with cute and charming character designs. Watching an episode of Clannad is like spending 20 minutes in a sweet shop. It’s an animation that just glows. 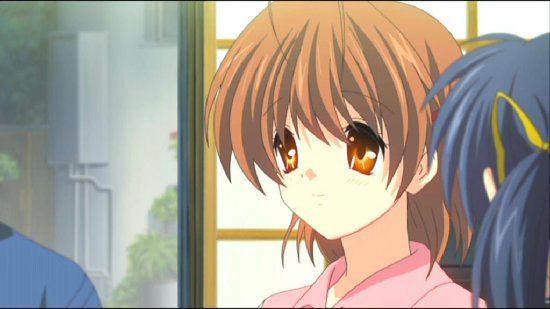 You have the choice between DD 2.0 English and DD 2.0 Japanese, and this being a Siren sourced disc, the audio will default the Japanese. Of course you have the optional translated subtitles and a signs only track. I went with the original language audio, and was very happy with the actor performances and the overall experience. Clannad After Story gets a very agreeable music soundtrack, with some very nice theme songs, and incidental music that suits the story perfectly. I tried the English dub, and couldn’t bear more than ten minutes of it. It’s one where the voice actresses try to emulate the original performances too closely, and it always sounds forced to me and unnatural. Of course your mileage may vary. 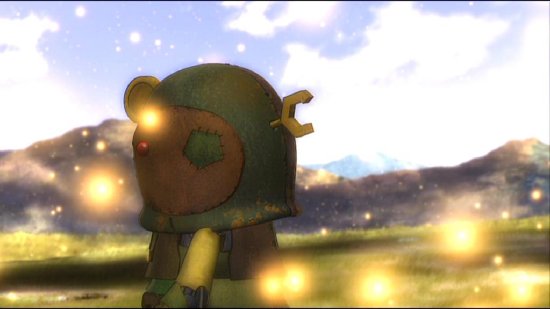 The problem with Clannad’s subtitle stream getting mixed up with the screen captions has been resolved for the sequel series, and the text captions get nice constant placement on screen even when dialogue is occurring. You don’t miss a thing. Except I did notice one missing subtitle 14:18 into episode 1.

Three discs come with static menus, and a language select option. You have to play the episodes one by one. There is no Play All option. Each episode ends with an extra 90-second English language credit reel over a black background.

There are no extra features with this collection. 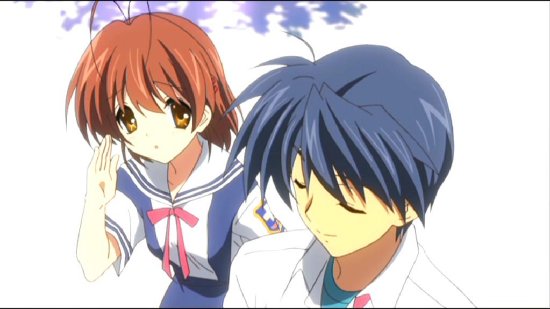 I had opined that Clannad After Story would be where the story really began to pile on the angst, but going by the first two discs in this collection, you’d be forgiven for thinking that it’s really just more of the same, more high school emotions explored as Tomoya and Nagisa help those friends that hadn’t yet had the benefit of their good natured meddling to turn their lives around. As Clannad proved, this kind of storytelling is very compelling, offering little character mysteries infused with emotional weight and angst, mini-tragedies and supernatural heartache that is guaranteed to get those eyes slightly moist, the lips quivering just a tad, and making it just a little bit harder to swallow. And no, I didn’t break down and blubber at the tale of a loyal cat... well not much... 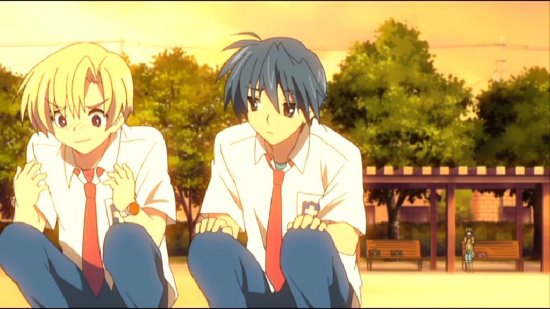 If you enjoyed the majority of the Clannad series, and are looking for more of the same, you’ll love the first eight episodes of this collection. The first is a pure bit of fun, with Tomoya and his friends having to put together a baseball team to help Nagisa’s dad achieve his dream of beating the neighbourhood rivals. It’s the last bit of holiday fun before the second semester starts, and then we get back to normal service for Clannad After Story, with Tomoya and Nagisa helping their friends sort out their personal issues. 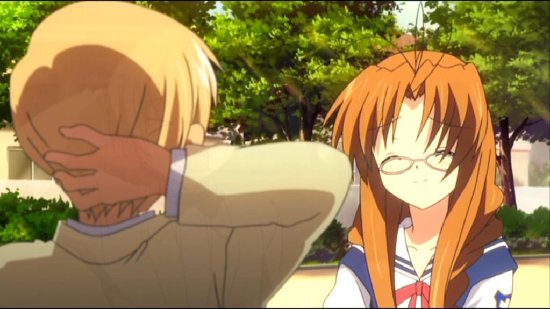 First up is a three episode arc dealing with Tomoya’s fellow delinquent Youhei Sunohara. While Tomoya has been motivated by his love for Nagisa, and helping her reintegrate into school over the last year, Sunohara has really just been coasting along, and he has no plans for graduation. It’s affecting his relationship with his sister Mei, and Mei shows up determined to turn her big brother’s life around. She enlists Tomoya’s aid, while at the same time Sunohara asks Tomoya’s help in convincing Mei that his life is on the up and up. What starts off as a comedic bit of nonsense with typical Sunohara frivolities soon gets pretty dark as the reality of his relationship with his sister becomes clear. 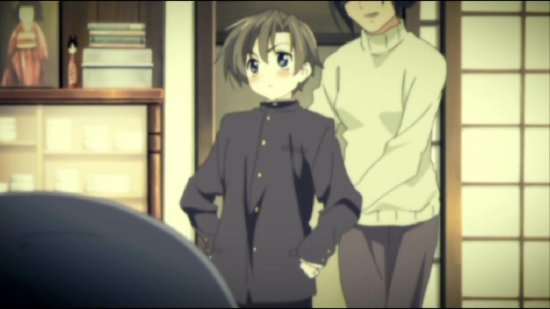 Then it’s the turn of Sunohara’s landlady Misae, as we learn of her past when she was in high school, and how she managed to be adopted by the cat that appears to live in Sunohara’s dorm. This is the sort of supernatural romantic angst that only Key Visuals can do without becoming overly sugary or cloying, as Tomoya learns the truth through a dream. 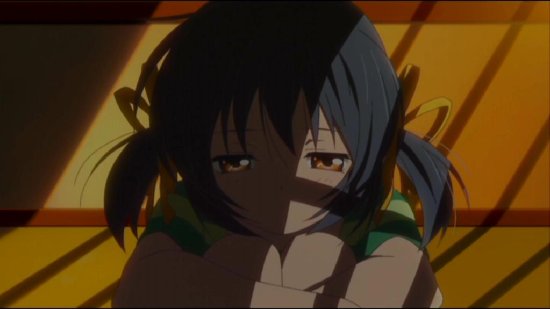 The last of the school-friends to be helped by Tomoya and Nagisa is the constant resident of the school’s reference library, Yukine Miyazawa. They’ve often escaped to the library for some peace and quiet, as well as Yukine’s rather unique hospitality. Oddly enough there are the occasional burly men hiding amongst the bookshelves, and the reason why becomes clear here. Her brother is the head of a local gang; while she gets respect from both the town’s gangs as she helps heal the injured of both sides whenever there is a fight. But her brother’s been in hospital, and the tension between the gangs is rising. It’s made worse when Sunohara pretends to be her brother to impress a little kid. Now the rival gang thinks that her brother is back, and it’s time to settle scores. Also keep an eye out for a great in-joke if you’ve seen Kanon. 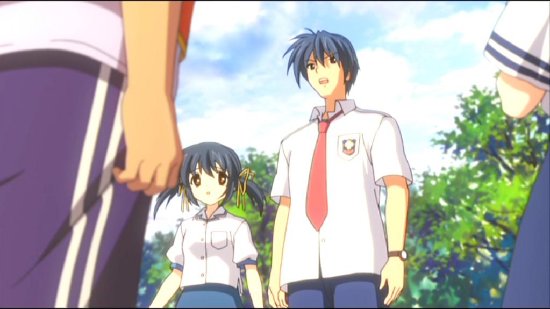 It’s the third and final disc that proves that Clannad After Story is no simple rehash of the first series. All of a sudden, things in Tomoya’s life start going downhill, and it becomes clear that while he has been helping Nagisa and their friends, he hasn’t paid attention to his own life. For one thing, Nagisa’s been gently nudging him towards mending the rift with his father, something he’s been ignoring. When the school year ends and he graduates, he finds that he’s at something of a loose end, made worse when Nagisa falls ill, and winds up dropping out of school yet again. With most of their friends graduated, and Nagisa having to repeat the same year for the second time, and make new friends all over again, the same sort of magic that helped her the previous year isn’t there, and she becomes isolated once more. 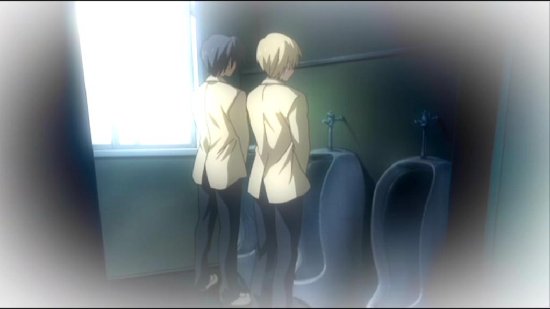 To offset that, Tomoya decides to support her, first by getting a job in the Furukawa bakery, and then getting a job working with Yoshino in the electric company. Slowly and surely he begins to build a life for himself, gets a place of his own, and gets his life into a place where he and Nagisa can be happy together. At the end of this collection of episodes, he and Nagisa make a decision that fans of the show will have been eagerly awaiting, but unfortunately they make it for all the wrong reasons, after his neglect of his relationship with his father comes back to haunt him. 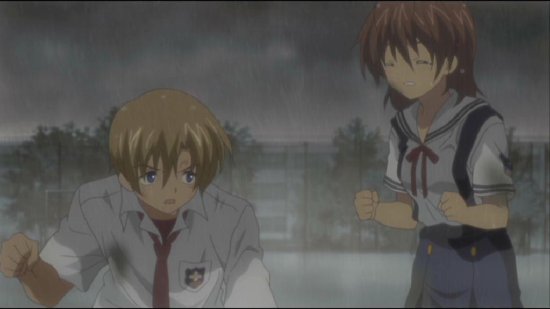 The final four episodes of this first collection of Clannad After Story offer a hint of the direction in which this story is going, and offer something wholly different from what has come before. It becomes a smaller show focusing more on Nagisa and Tomoya, as their friends have all graduated from school and moved on. But the relationship drama gets a lot more interesting, and indeed realistic, as the emphasis is on developing their relationship, not on fixing everyone else’s problems. If you miss that from the first series however, the first eight episodes in this collection should satisfy your need, offering the ‘more of the same’ quotient of Clannad, before After Story begins in earnest.