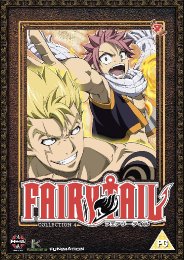 Pity the poor US fans of Fairy Tail, with their preferential release schedules and DVD Blu-ray combo sets. They have got their Fairy Tail instalments in a much timelier manner than us in the UK, having to wait on Australia for the PAL masters. US fans have had to wait with baited breath on Funimation to announce the acquisition of further episodes of this long running shonen action series, one of the better ones to be produced in recent years. They’ve had to worry that the same fate might befall Fairy Tail that happened to D. Gray Man, unceremoniously dumped when the sales of the series in the US couldn’t justify the price the Japanese were asking to license more. And Funimation left it to the last minute to ease those fears, practically the final convention of the season to make their announcement. For us UK fans however, the wait wasn’t half as tortuous, as that announcement was made in between the UK release of volumes 3 and 4. Funimation have indeed licensed a further 24 episodes of Fairy Tail, and they have the movie to boot. Our quest through the Kingdom of Fiore won’t end just yet. 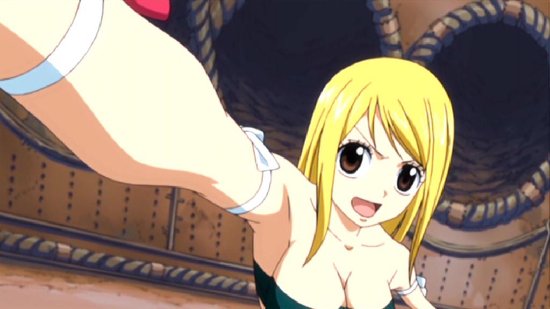 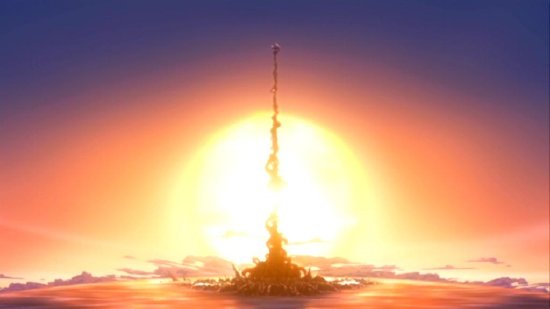 Manga Entertainment release the next twelve episodes of Fairy Tail across two discs, and this collection sees the conclusion of the Tower of Heaven arc, as Erza’s childhood friend Jellal puts into motion his plan to take over the world. It’s straight from one problem to another when our heroes return home though, as while the Fairy Tail guild is in a celebratory mood for the upcoming Fantasia festival, their most powerful member, and leader Makarov’s grandson Laxus is getting more and more disdainful of the way Fairy Tail is led. When he decides to take over the guild, everyone is put in peril. 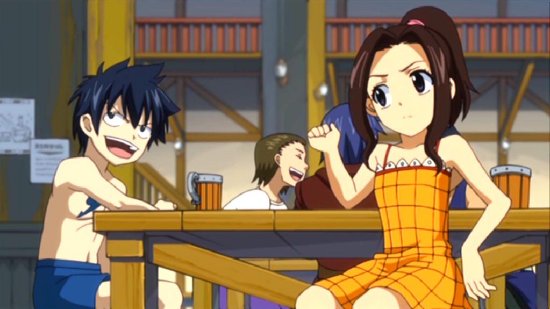 Disc 2
43. Defeat Your Friends to Save Your Friends
44. Thunder Palace
45. Advent of Satan
46. Clash at Kardia Cathedral
47. Triple Dragons
48. Fantasia 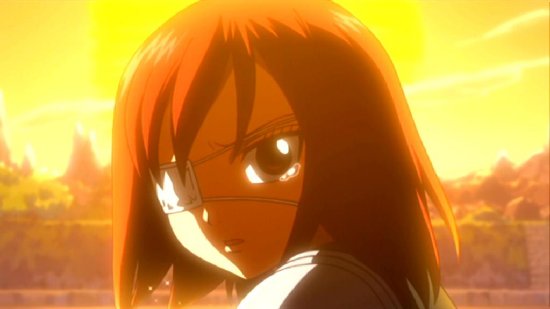 Fairy Tail gets a 1.78:1 anamorphic transfer, which courtesy of Australia’s Madman Entertainment is a native PAL conversion, with the 4% speedup that implies. The image is clear and sharp throughout, free of any obvious compression signs, and generally very pleasant too watch. It’s a bright, lively anime, and given that it’s a long running series, the character designs are understandably simplistic, the world design not overly complex. It’s full of primary colours, and the animation itself is energetic, especially through the various spell sequences. As each of the spells has a special move, and the characters calling out the name of each one, you can expect a fair bit of repetition of the expensive, CG enhanced spell, summoning, and transformation sequences, but it hasn’t yet gotten tiresome in these twelve episodes.

Oddly, the transfer isn’t quite as accomplished as before, as most of the scene transitions in the show have a slight jerk, especially if they happen during a pan or a scroll. 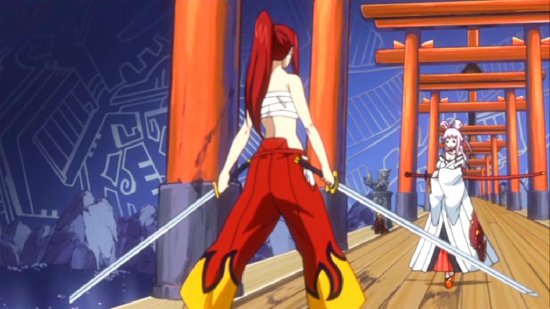 The discs get static menus with the show’s music playing in the background.

The first disc just gets one audio commentary to accompany episode 39. In it, ADR Director Tyler Walker and voice of Siegrain (and others) Rob McCollom get together for the typical light hearted Funimation yak track. 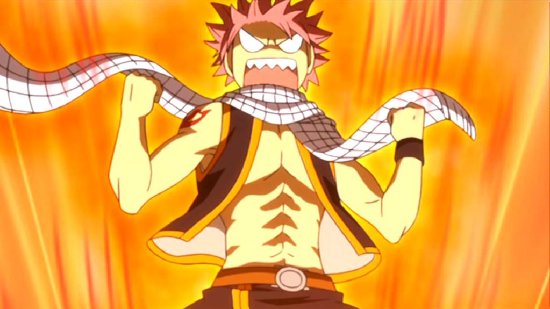 Disc 2 also has the textless credits, and this time you can turn the subtitles off. 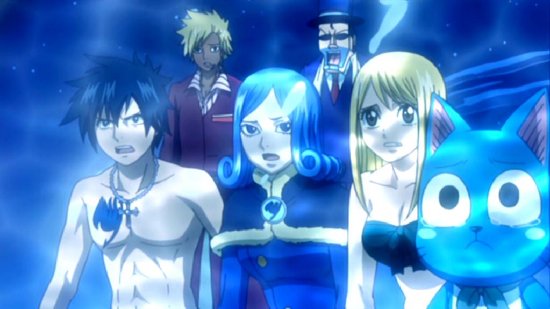 Fairy Tail is brilliant! It’s the best long running shonen action show available in the UK right now, and the news that Funimation has licensed more, making the likelihood of the rest of the series being released here stronger, makes me grin in anticipation. At this point, unlike shows such as Bleach or Naruto, Fairy Tail gives us efficient, well told, and engaging storytelling, light on filler, recap or flashback. It’s got great characterisations, a really interesting story unfolding, and top quality and consistent animation. It also blends its comedy and drama to perfection. It’s everything you could possible want from such a show. And clichéd though such a statement is, Part 4 of Fairy Tail is the best yet. 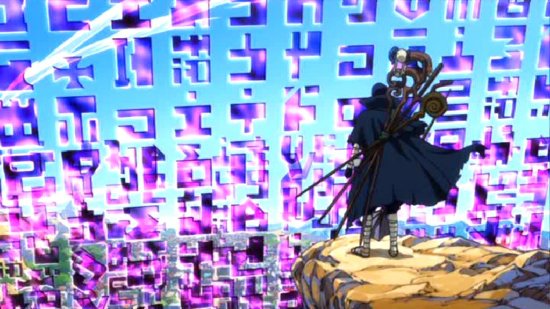 Believe it or not, we’re still at the point where we’re exploring the characters and revealing their backgrounds, despite the show’s amenable pace and lack of padding. The conclusion of the Heaven’s Tower arc fills in Erza’s back story, and even finishes off the Siegrain arc as well. Earlier on in the series, there was a moment in the magic council between council member Siegrain and Erza, and I was certain that would have some boding for the show’s main arc. It was actually just foreshadowing this arc, and I have to admit that I was a little disappointed that Siegrain’s role wouldn’t be bigger in the show. Then later on in this collection we get to see what lies behind Mystogan’s mask, and that opens a whole other can of worms that just adds to the mystery. 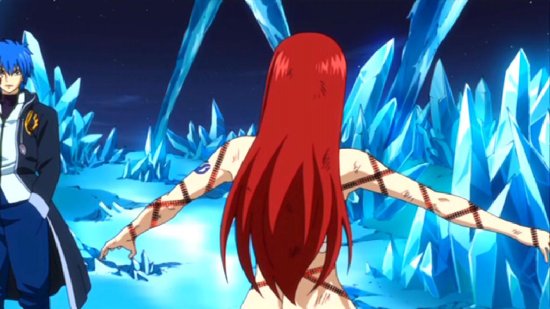 For the conclusion of this set of episodes, we’ve apparently developed most of the main cast (save for Natsu), and we move on to the supporting cast. Only it turns out to be that Laxus is more than just a background character, grandson of the guild leader Makarov, and a man whose ambition overwhelms his common sense. The coup he leads against his grandfather is devious and cruel, pitting Fairy Tail members against each other in a battle to winnow out his ideal guild. He has a lesson to learn about loyalty and family, and the earthshaking events that happen in the final 7 or 8 episodes in this collection do more even than that. 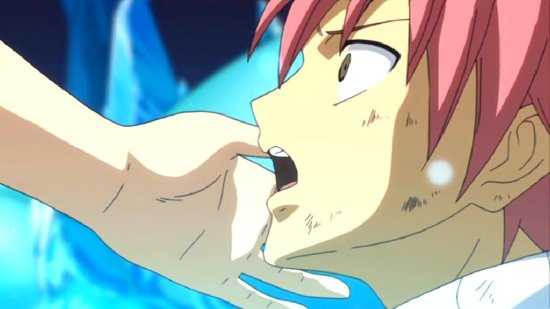 All the while, Fairy Tail keeps sowing seeds of future storylines, revealing some characters to be other than they are, offering surprises, twists, red herrings, and character revelations that tantalise and excite. It just makes you want to see more and more. While Funimation have licensed some further episodes, Manga Entertainment are yet to follow suit, so you’ll be happy to note that while there is an ongoing storyline being developed, the arc that ends this collection wraps up neatly, and the narrative fix you get doesn’t have any pesky cliff-hangers that will have you angrily demanding more. This is a good place to pause and take a breather. 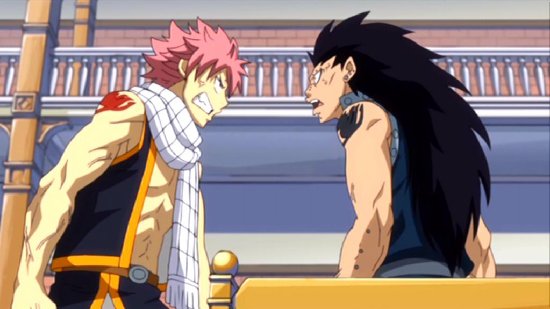 I can’t emphasise strongly enough just how great the storytelling is in this show. It’s got a perfect mix of comedy, action, drama and heartbreak, it can turn on a dime, and it feels wholly natural. You can be laughing one minute, then jazzed by a brief, but brilliantly animated action sequence, and then be welling up the next. A lot of this is down to the excellent music soundtrack, a mix of Celtic styles and classical music, powerfully emotive and melodramatic, but never cloying or obvious. The music drives the show and pulls the viewer into the experience in a way that I haven’t really seen since the first Full Metal Alchemist series. And it’s the emotional narrative of Fairy Tail that really makes it stand out. You care about all of these characters, heroes and villains both, and that is something that is difficult to accomplish at the best of times. Fairy Tail makes it look easy. 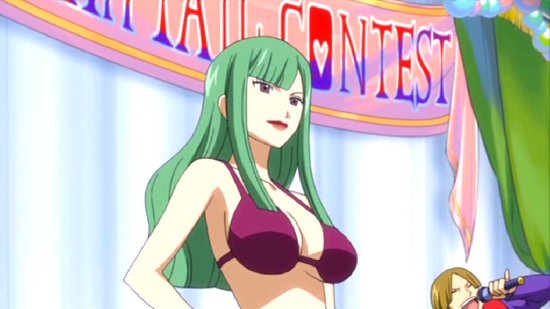 Naruto and Bleach just seem to run and run, and have epitomised shonen action shows for the last ten years. Manga Entertainment is also now releasing the granddaddy of them all, Dragon Ball Z, but if you want to jump aboard the long running shonen action train, then forget all the standards, go for this relative new kid on the block, as Fairy Tail’s quality leaves them all trailing in its dust.