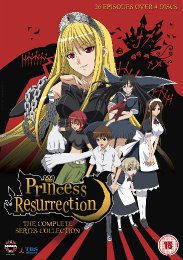 When things out of the ordinary happen, I tend to get suspicious, invoking my inner cynic. Manga Entertainment isn’t exactly known for releasing complete series collections for 24 episode-plus shows straight off the bat. Even though we’re long past the era of single volume releases, they still release such shows in two halves, and leave the complete series collection for much later down the line. The last time I remember them doing something similar was for the Guyver Series, although that at least had a previous release from ADV UK. Princess Resurrection has never had a release in the UK before. It was originally released to the West by Sentai Filmworks, who in the US went from subtitle only half season collections, to a subtitle only complete collection, and then eventually a dub release, indicating a show that turned out to be more popular than expected. Australia’s Siren Entertainment however went straight to the complete collection, which is what Manga Entertainment have also done. It’s also at a relative budget price of £49.99 R.R.P. (although the Australian R.R.P. actually works out cheaper). 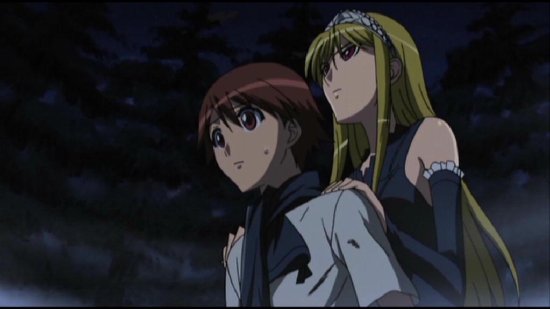 Pre-release discounts make this quite the bargain, and that suspicious nature of mine makes me wonder just why. This could be one of those shows that licensors give away as part of a package deal. The opacity of anime contracts is legendary. Maybe Manga were sold “Hot Anime Ticket” for an exorbitant price, and this was thrown in to take the sting out of the deal. Maybe Sentai want to recoup the money they spent on the dub, and Manga will only be able to release “Hot Anime Ticket” if they release this first. I’ll just restrain that inner conspiracy theorist and instead wonder if Princess Resurrection is actually a good show, and if Manga are just giving us a bargain. After all, that happened with Heat Guy J (when it eventually went to boxset). 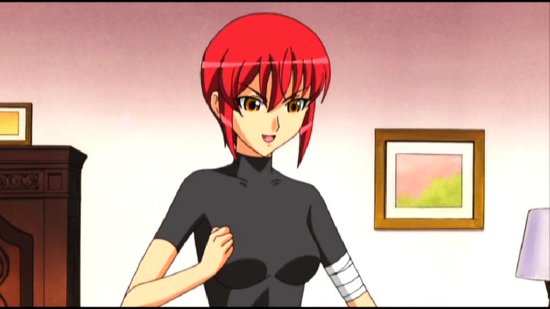 Hiro Hiyorimi is dead, which is a hell of a way to start a day. His sister Sawawa had contacted him, telling him that she had a new job as a maid in a mansion, and that he should come and live with her. Only the mansion turned out to be derelict, and wandering aimlessly through town, Hiro encountered an elegant blonde girl atop a massive cart, being pulled by an infant maid... It’s when a bunch of steel girders fell from the sky, and Hiro rescued the blonde girl that he died. This impressed the blonde girl, who turns out to be Hime princess of the monster race, so much so that she uses her powers to resurrect Hiro and make him her servant/bodyguard. She’s the owner of the mansion, and Sawawa’s new employer, and the childlike maid is actually an android called Flandre. 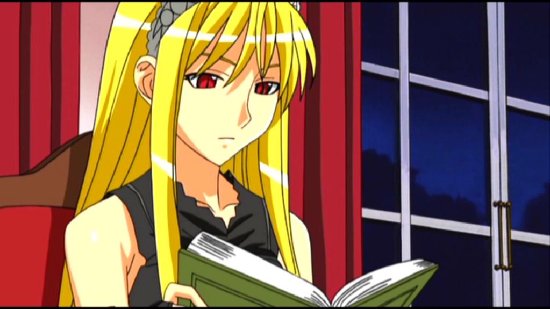 So now Hiro has a full time job too at the side of Hime, and he can’t leave her lest the life force keeping him alive runs out. He’ll have his hands full serving Hime as a bodyguard though, as her family wants her dead. The children of the king of the monsters are expected to fight each other to succeed him, and only one of Hime’s many siblings can live to prevail, hence the falling girders, and hence the various assassins that come after her. But some of these enemies turn out to be allies as well, including the half werewolf Liza Wildman, the vampire Reiri, and Hime’s little sister Sherwood (who comes with her own android and a panda). With all sorts of monsters appearing to attack Hime, Hiro will find that being half immortal isn’t enough for him to keep up. 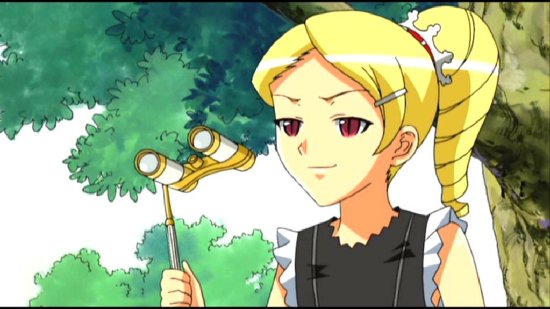 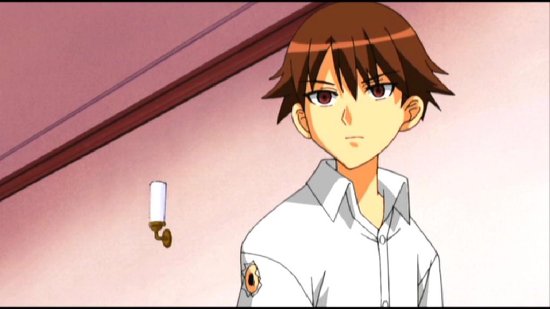 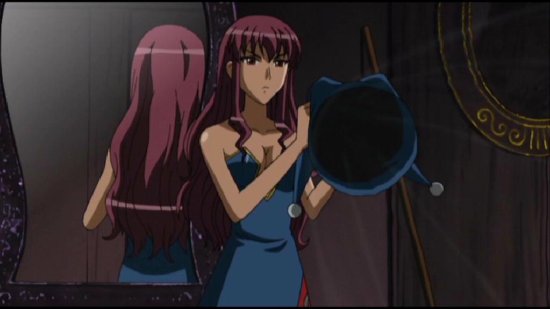 Princess Resurrection gets a 1.78:1 anamorphic transfer, which via Siren Visual of Australia gets the PAL makeover for clear, sharp and smooth animation. But that’s not anything to get excited about. During the end credits of each episode, I see prominently the logo for Madhouse animation, and each time I issue forth a disbelieving WTF. This is animation on the lowest of budgets, achieved by the lowest bidder, and accomplished with as little work as possible. It’s far from what I expect from studio Madhouse. The character designs are the most generic, animation is extremely limited, and colours don’t vary much from the primary. It looks like a Flash animation. There are times where the animators don’t even bother closing a character’s mouth after they finish speaking, saving a couple frames of motion, but making them look like imbeciles in the process. Princess Resurrection is as disposable an anime as I have ever seen. 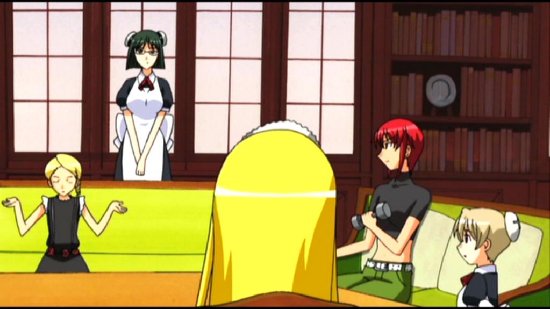 While this is a native PAL conversion, there are a few scenes afflicted with judder, particularly in the early episodes, and also in one cut during the end credits.

You have the choice of DD 2.0 English and Japanese stereo, with optional translated subtitles and a signs only track. This being a Siren Visual sourced disc, it will default to Japanese with subtitles on insertion into your player. I stuck with the Japanese audio, and the dialogue was clear, if forgettable throughout, along with the very bland incidental music. The show does get a couple of enjoyable theme songs though, with the typical insanity of an Ali Project track making the end credits a highlight. The subtitles are timed accurately and free of error, although there were a couple of subtitles that overlaid a signs caption that made things hard to read. Incidentally, one of the key features of the androids in this show is their limited vocabulary, which boils down to a cute noise, “Huga!” Why this had to be subtitled every time it was uttered escapes me. I sampled the English dub, and Princess Resurrection gets the dub it deserves.

Each disc comes with static menus that present all the episodes on that disc to choose from, language options, and play all. For some strange reason however, the disc will boot up with a splash screen featuring one of the show’s characters, and you’ll have to press the play or enter button to actually get to the menu, which is a daft way of doing things. As per current Sentai Filmworks practice (who licensed and dubbed the show in the US) each episode retains the original credits, and is followed by a translated English language credit scroll, which effectively adds another 90 seconds.

The only extras are on disc 4, and amount to the textless credit sequences. 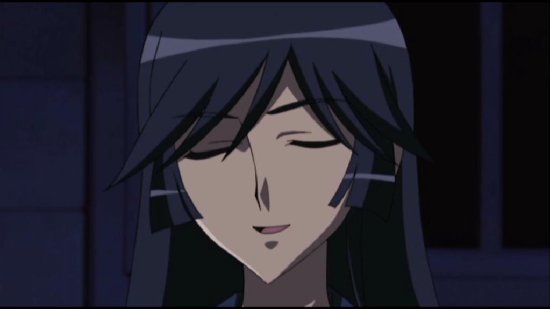 Princess Resurrection is deathly average. It’s mediocre, it’s mundane, it’s run of the mill, it’s hackneyed, it’s clichéd, it’s getting to the point where I’ll have to press the Thesaurus button on my word processor, so I’ll stop. If you’re going to buy just one supernatural harem anime this month, get Rosario and Vampire, as at least that will get you some fan service into the bargain, and it’s funnier. Princess Resurrection is another supernatural harem anime; with a hapless teen male somehow winding up surrounded by all sorts of female monster and then mayhem ensues. It’s just so, been there, done that, bought the body pillow that you won’t find anything new or original to tantalise the anime juices. It’s the kind of show that’s so familiar that you just stick it on, and leave it running in the background while you devote your attention to something more meaningful, like flossing your teeth. 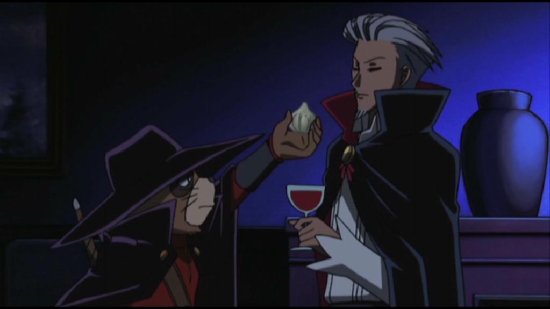 It is an interesting, Shakugan no Shana and Buso Renkin style set up, with the main male protagonist starting the show by dying, only to be brought back to life by the female protagonist, and winding up indebted and bonded to her as a result. Hiro Hiyorimi requires a top up charge of life energy from Hime every couple of days, so he can’t stray far from her side. The other interesting side of the set up is that the children of the monster king must fight to the death to succeed him, but you may as well forget this, as it’s left by the wayside in favour of a monster of the week format, only really recalled at the end of the run for a couple of episodes, before being left hanging in the hope of a second series. Every episode will see some new monster arriving, either hoping to possess Hime’s power, or ordered by one of her sibs to attack her. Stuff will happen during the episode, some poorly animated action, or some moments of levity, Flandre will say ‘Huga!’ a lot, the good guys will prevail, end credits, rinse and repeat for the next episode. 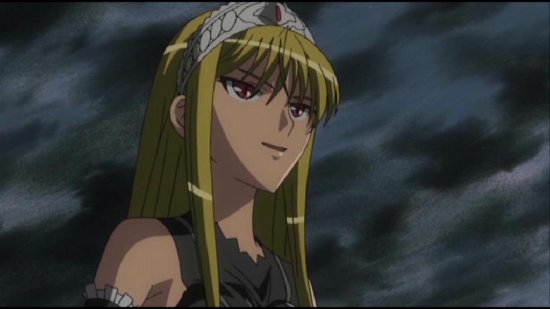 Another thing is that the characters boil down to clichés and running gags. The androids all have names that begin with the syllables ‘Fran’ or ‘Flan’, and say ‘Huga’. Hiro is the hapless teen male, who after being made half immortal exists to take whatever punishment his employer or her enemies care to dish out. Hime is elegant and haughty. Sawawa is warm and motherly, and utterly clueless. The gag is that she never really comprehends what’s going on, but prevails anyway, and spends most of her time eating strawberry parfaits, clueless to the fact that the cafe owner is actually in love with her. They are soon joined by a midriff-baring tomboy half-werewolf (only her arms transform into paws), who is brash and loud and hates vampires. This is when the vampire Reiri shows up, whose telling trait is that she observes but never gets involved, and she like teasing the werewolf. Hime’s sister Sherwood also joins the harem. She’s short, a little bratty, but outgoing and adorable, and she has her own retinue of tall elegant android, and panda. All of these women develop some degree of affection for Hiro, for some inexplicable reason. If the Addams Family were a harem anime... Then it probably wouldn’t be this one. 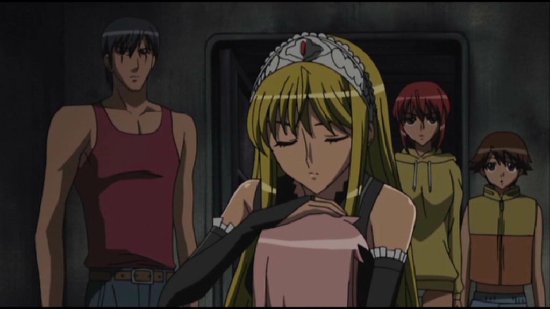 Animation from the lowest bidder, clichéd stories, clichéd characters, you’d think that I’d dismiss this as the most disposable of a disposable medium. But there is something about Princess Resurrection that clicks. It’s got a wry twinkle in its eye when it comes to the way that its characters interact; its repetitive nature makes each episode feel like a set of comfortable touchstones. It had just enough humour to it to make me chuckle a few times in each episode, and that goes a long way to redeeming it for its shortcomings. Given the choice, I wouldn’t want to buy Princess Resurrection. If I had it on my shelf, I wouldn’t choose to watch it. But if it was playing, I wouldn’t press the stop button either.