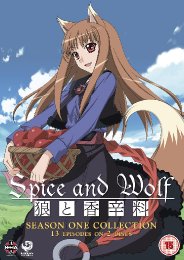 How do you sell a niche anime series in the current straitened climate? You might have heard about the financial downturn. It affects the anime industry as well, with creators falling back on the core demographic with which they can assure their series will make a profit. The core demographic like certain things in their shows, certain character tropes, appealing character designs, familiar clichés, and plenty of fan service, which will have plenty of merchandising to go with it... including character body pillows. This isn't the atmosphere in which you release a Serial Experiments Lain, or a Texhnolyze, or a Le Chevalier D'Eon. You don't take risks with this audience. Take Spice and Wolf for example. Its central female character is an anthropomorphized wolf, a cute girl with wolf ears and a bushy tail, and a tendency to howl at the moon. She's also got that classic character trait of a hard outer shell, and a soft gooey middle. Best of all, when she makes her entrance into the show, she's stark naked. And she has a tendency to take her clothes off at the drop of a hat. 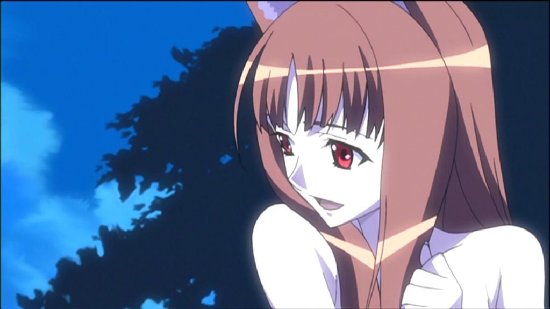 Good! Grabbed that core audience. You know you want this show. This is just up your alley. You're already looking on-line for the posable action figures and the plushy toys. You're sitting down, locked into this show. You're already a fan, and you will watch all thirteen episodes of this slow paced, thoughtful, character focused show about commerce and economics set in a pre-industrial alternate Europe? That's how you sell a niche series in today's financial climate. 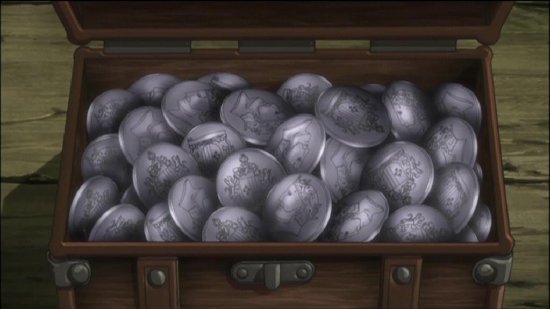 A small village has traditionally invested its hopes in an ancient wolf goddess when it comes to the wheat harvest. Somewhere along the line, anything to do with the wheat would be attributed to the whims of the wolf, and the local harvest festival would even involve one of the girls being cast in the role. Of course this being the modern day, the prosperity of the village and the quality of the wheat harvest is now down to the investment from the local land owner, and modern agricultural techniques, and the wolf legend is little more than a tradition. But when peddler Kraft Lawrence passes through the village, he learns that some legends are born from truth, as he picks up an unlikely passenger. Holo is the town's wolf deity, who feels that her bargain with the villagers is now complete. She wants to go home, back up to the Northern lands where she was born, and she makes a deal with Lawrence to accompany him. As they travel, Lawrence finds her ancient wisdom helps his profits no end, but having a wolf deity at his side also attracts some unwanted attention. 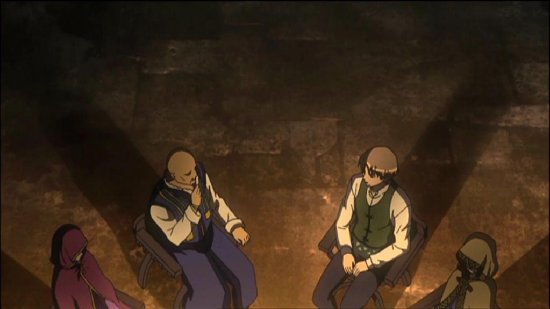 Thirteen episodes of Spice and Wolf Season 1 are presented across two discs.

Disc 1
1. Wolf and Best Clothes
2. Wolf and the Distant Past
3. Wolf and Business Talent
4. Wolf and Her Helpless Partner
5. Wolf and Lovers' Quarrel
6. Wolf and Silent Farewell
7. Wolf and a Tail of Happiness 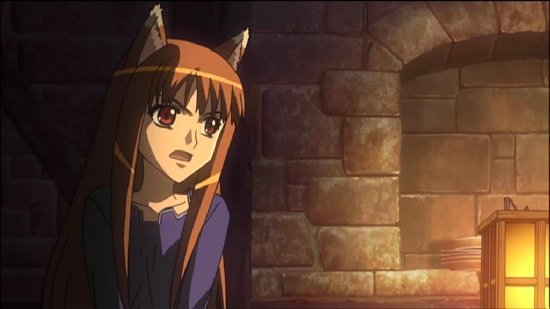 Spice and Wolf gets a rather agreeable 1.78:1 anamorphic transfer on these DVDs, native PAL of course, with the requisite 4% speed up. I watched the show on my usual CRT set, and found it to be a very pleasant viewing experience. The image is clear and sharp throughout, the animation is free of compression artefacts, and the clarity afforded to the world and character designs do the show justice. Spice and Wolf maintains a subtle, autumnal palette of colours which enhances the show's sedate and measured pace. It's very much an atmospheric piece, and while the content is wholly different, I was put in mind of shows like Haibane Renmei. You should note that this is not the show to go for, if you want flashy and extravagant animation. Spice and Wolf is very much a cerebral show, the meat is the dialogue, and its animation is pretty conventional and at times even static. 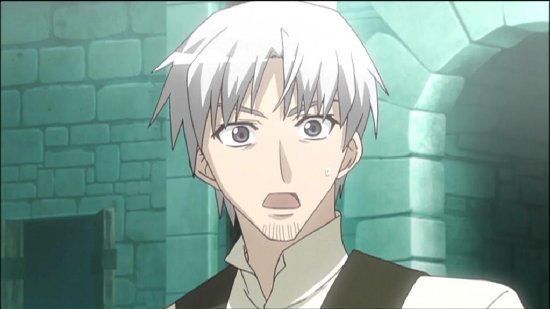 The one issue was that Spice and Wolf didn't upscale all that well when I tried watching an episode on my HD flat panel set, and in this instance, issues of aliasing and low resolution became far more obvious than they usually do for up-scaled anime.

You have the choice of the original DD 2.0 Japanese stereo, and the usual DD 5.1 English upmix from Funimation. I went with the Japanese track, and found it to be more than acceptable, with the important voice cast of the central pairing of Lawrence and Holo just spot on. It isn't the most dynamic audio when it comes to anime; it is after all a dialogue heavy show, with rare moments of action, but the stereo works just fine. What is notable about Spice and Wolf is the music, with a couple of very agreeable theme songs, and a music score that heavily invokes the pseudo mediaeval period of the story. I watched an episode in English, and while the 5.1 isn't really needed for the content, the dub does get the main cast right, with a couple of excellent choices for Holo and Lawrence, up there with the Japanese audio. The same can't be said for the incidental cast however.

Both discs get static menus and jacket pictures when the discs aren't spinning, depending on the capabilities of your DVD player.

Disc 2 has the collection's sole extra features, which comprise the show's textless credit sequences. Well, I say textless, but you can't really call them such if the song lyrics are subtitled, and there's no way of turning the subtitles off. Also, there's no textless version of the episode 13 ending on the disc. 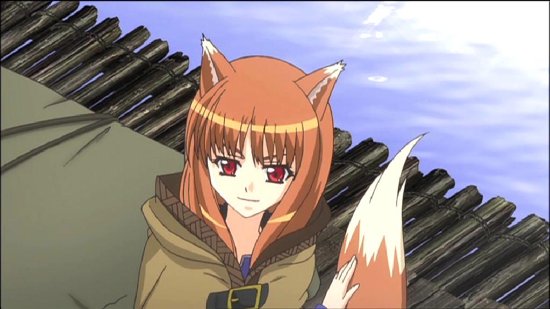 Once in a while, a show comes around that reminds you just why you started watching this anime stuff in the first place. Spice and Wolf is such a show, and it's been quite a while since I've been as enthused about a new series, especially one that looks as sedate and mundane on the surface as this one. Spice and Wolf isn't about the action, it isn't about the fan service, despite a main female character who we first encounter in the altogether, and it isn't about conforming to the usual anime stereotypes and tropes, despite some very stereotypical character designs. 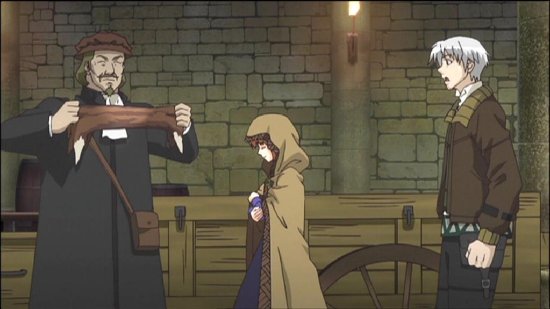 It's a tale about a peddler, Kraft Lawrence, as he earns his living in a pre-industrial, mediaeval pseudo-Europe. The city states that he visits are fictional, but they draw heavily on European history and architectural and cultural styles. One man, slowly working his way across the landscape with his horse and cart doesn't inspire a lot of heavy duty action. The show does make good use of business practices and economic theories to drive its story, with ideas like exchange rate, devaluing currencies, buying on credit, and even smuggling used to dramatic effect. It makes for some interesting driving forces to the tales, and is put across in a far more appealing way than Robert Peston has ever managed. 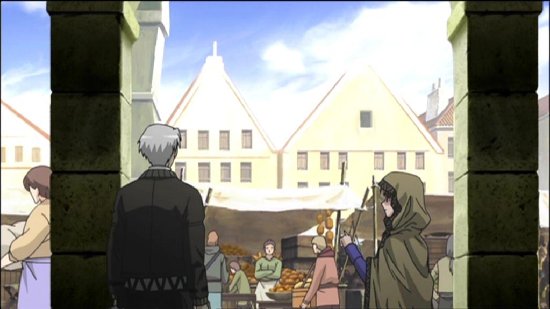 The main arc of the story regards the journey north that Lawrence takes with the wolf deity Holo. He encounter her in the first episode in a village that has always believed in the wolf goddess as the guardian spirit of the wheat harvest, but modern farming techniques and the advent of the church has relegated such a pagan belief to little more than superstition, and Holo feels her stewardship of the village fields is over. This also introduced another significant element of this world which plays a big part in the story. There is the conflict between the old pagan beliefs and the power of the church, which leads creatures like Holo to be considered witches or evil spirits to be hunted and condemned. It adds a sense of danger to their travels, as Holo has to stay incognito, as well as makes them vulnerable to the schemes and blackmails of others. There is also a certain interest in seeing just how much economic and political power the church has over the state, and that too drives much of the story. 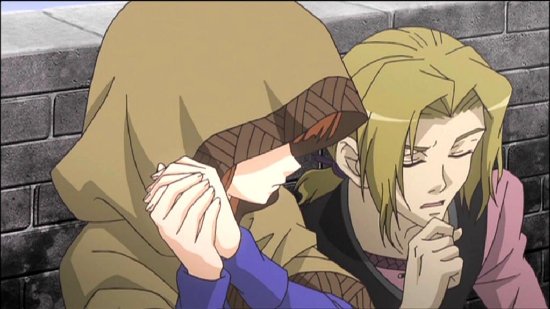 But the real draw to Spice and Wolf, the real reason that you will want to see this, is the relationship that develops between Holo and Lawrence, two very real and complex characters. It's a relationship that doesn't conform to the usual anime lines, is adult, interesting, cleverly written, and utterly charming. Holo, the Wise Wolf is a deity that is hundreds of years old, but appears in the guise of a young girl. She's cute, sweet, attractive, but she's also world-wise, independent, and experienced. She can hold her own in any conversation, and doesn't need to rely on her physical assets or emotional cajoling to get her way. What's interesting about her is a very appealing dichotomy. She's the wise wolf, and that comes across in her intelligence, wit, and common sense. At the same time, she's a deity that has for the most part spent her life alone, separate from the village she protected. She has a sense of loneliness and a childlike naivety in the way she relates to other, particularly Lawrence, which stands at odds with her strength. 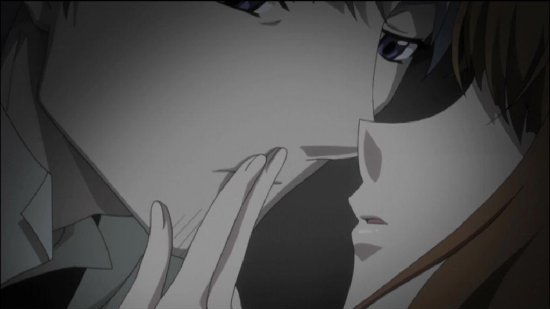 Lawrence on the other hand is the consummate businessman. His home is the road, and his cart, and he knows about dealing with others to gain best advantage. It makes him a little cynical and gives him an air of confidence, but he's also good natured and likeable. His comfortable vision of the world is shaken when he first encounters the wolf deity, but what's even more unsettling is that Holo is very much his equal in terms of intelligence and even in business. To his credit, he takes the challenge in good stride, and the two form an impressive team doing business as they head on their way north. 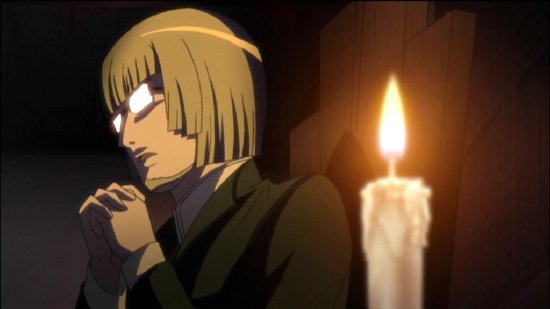 Along the way, the affection between them develops naturally, and it's best expressed in the good natured teasing and intelligent banter between the two. It's in this relationship that much of the joy in watching the series lies, as the chemistry between the two is honest and unforced, and also very believable. You can revel in the good moments between the two, and that makes the moments when their relationship is tested by adversity all the more affecting. 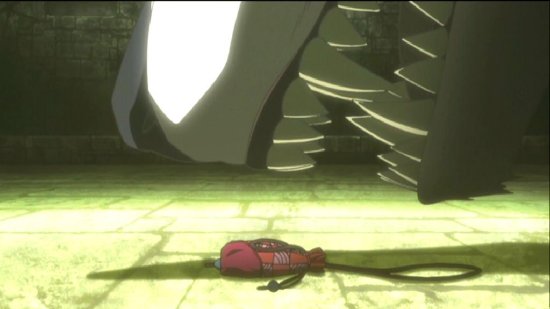 The animation in Spice and Wolf is pretty run of the mill, but the series is anything but. If you want something different, something you haven't experienced in anime, then you have to give this show a try, as beneath the economics and politics of the premise, there's also a very different sort of relationship that's explored, between male and female characters who together tick none of the character cliché boxes that you'll be used to from anime. It's also a relationship that develops in a wholly different way from the usual anime pairings. It's thoughtful, it's realistic, and it's utterly charming, and I can't wait to see what happens next in season 2.