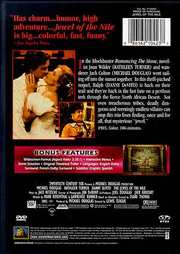 Back Cover of Jewel of the Nile, The
Related Items

DVD
Romancing the Stone (US)

DVD
Towering Inferno, The (US)

DVD
View To A Kill, A: Special Edition (James Bond) (US)
Related Articles

Jewel of the Nile, The (US) 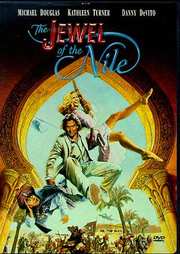 Synopsis:
In the blockbuster Romancing The Stone, novelist Joan Wilder and wanderer Jack Colton went sailing off into the sunset together. In this thrill-packed sequel, Ralph is back on their trail and they`re back in the fast lane on a perilous trek through the fierce North African Desert.

Not even treacherous tribes, deadly dungeons and seemingly endless villains can stop this trio from finding once and for all, that mysterious "jewel".

The Jewel Of The Nile is one of the best adventure movies I have ever seen and holds the 15th place
in the list of my alltime favourite movies. I have seen this movie more than hundred times (there`s only two movies that I have watched more often than this sequal and those are Return Of The Jedi & Licence To Kill) and I`ll never get bored watching it. It`s the sequal to the Robert Zemeckis movie called Romancing The Stone, which also was a great movie, but The Jewel Of The Nile is even more entertaining, funnier and cooler than the first one. It has earned it`s place in the list of greatest sequals ever with Beverly Hills Cop 2, Terminator 2, Robocop 2, Empire Strikes Back, Temple Of Doom, Aliens and The Godfather Part 2.

The movie is directed by Lewis Teague and produced by my favourite actor Michael Douglas who
must be one of the most famous actors in the world and also one of the most talented actors ever.
Michael has also produced the great Milos Forman`s movie called One Flew Over The Cuckoo`s Nest and he has acted in great movies like Fatal Attraction, Ridley Scott`s Black Rain, Paul Verhoeven`s Basic Instinct plus in these great adventure movies Romacing The Stone & The Jewel Of The Nile.

The short story & plot: Jack Colton (Michael Douglas) and Joan Wilder (Kathleen Turner) have been
touring the world ever since their last escapade in Romancing The Stone, but when a mysterious man named Omar asks her to write the story of him becoming Emperor and joining his people in peace, they decide to go their separate ways. Jack goes to Greece as the the tough guys do and Joan goes to Africa. After Jack`s cool boat is blown up he soon teams up with funny Ralph (Danny DeVito) and with some other guy who needs Colton`s help to get the back "The Jewel Of The Nile".

After I had watched the vhs so many times that it couldn`t hold in one piece I needed to get
the dvd version as soon as possible. So, I ordered it and waited it for a week, so that I couldn`t
sleep very well and then one day it was in the mailbox and I was very grateful.
The packaging is the usual keep case, with "cool" front & back covers and inside the covers is a nice collectable booklet of the scene selection.The disc format is single sided, single layered (DVD-5) and it holds widescreen format (aspect ratio 2.35:1), audio formats English 2.0 Dolby Surround and French 2.0 Dolby Surround.

The transfer is quite nice, even there`s no 16:9 video enhancement and 6-channel audio remastering, but still good enough English 2.0 Dolby Surround. It sounds really good compared to the vhs and the Jack Nitzsche`s amazing score sounds better than ever before. Many action scenes had finally that kind of sound balance that it deserves and the "super soundtrack" sounded clear and good.
Only some explodes and gun shots didn`t make you jump from your chair and it`s becuase rear channel activity is limited with poor dynamic range. Afterall it sounded really nice.

The video quality was maybe the biggest suprise for me, because the 2.35:1 widescreen looked so clear
and colorful compared to my old vhs copy, which had really damaged during the years. If we look the age of this film (made in 1985) I would say that the picture is superb, even there`s some very minimal grain, but I was quite satisfied.

Menus are nice and brilliant with a shining red diamond (animation) coming from the bottom of the screen to the Nile. There`s also rare Original theatrical trailer (which I enjoyed very much) and subtitles for English + Spanish. The running time is about 106 minutes and I really recommend you to
buy this dvd, because it`s the classic of the classics.

One more thing, get the The Jewel Of The Nile soundtrack!