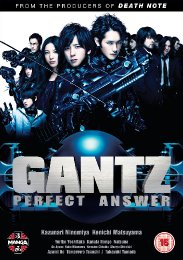 Gantz was an unlikely candidate for a movie adaptation. The manga was ultra-violent, satirical, and with more than its fair share of sex scenes. The anime release kept these elements, but was weighed down by some leaden pacing, and the lack of a decent conclusion, as the manga was still ongoing. Now if the film adaptation would be in the style of say Battle Royale, I could see it maintaining the same tone. But when the Gantz movies were finally shot back to back, they were aimed at a more general, summer blockbuster audience. They certainly got the budget to do the story justice, but lacking the social satire, and obviously devoid of all the sex, all that was left were some very cool action sequences to hold the attention. I reviewed the first movie on Blu-ray last year, and found it to be entertaining enough, if really only a remake of the first few chapters of the manga (the first half of the anime), reduced to its barest action movie elements, and with the characters pared down to everyman archetypes to boot. It was fun, but forgettable. But now comes the conclusion to Gantz in the form of Gantz 2: Perfect Answer, and just like the anime deviated from the manga, this too offers its own ending. This is where the Gantz movies become creative, and this just may be where things get good. 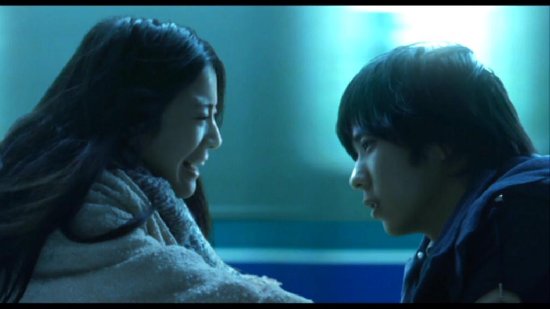 Kei Kurono and Masaru Kato died... Then they suddenly appeared in a strange apartment, empty save for a large, enigmatic black ball, and a host of similarly confused people. The ball sparked into life, with a rousing if distorted anthem. Characters and images appeared on its surface, telling the occupants of the room that their old lives were over, that their new lives were its to do with as it willed. It then showed them an image of a comical looking alien, and told them to find it and kill it. The ball was Gantz, and its game had begun. All they had to do was to kill enough aliens, with the aid of Gantz' weaponry and power suits, to score a 100 points, and then they could go free, or resurrect a fallen comrade. But the end of the previous movie saw them face their toughest challenge, a challenge that only Kei Kurono survived. 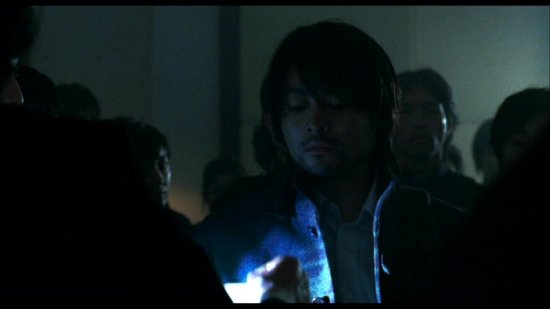 Now five months later, he's the skilled leader of a band of veteran Gantz players, working their way to 100 points so that he can resurrect his fallen friend. In the real world, he's working his way through college, and supporting Kato's orphaned brother Ayumu (telling him that Kato is away on business and will be back soon). Helping him is college friend Tae Kojima, although his secret life is preventing their friendship from developing into anything deeper. But the Gantz game is about to go horribly wrong, and the world according to Gantz isn't playing by the rules anymore. For one thing there's a cop investigating the rumours and whispers behind the Gantz game, the mysterious people who die in accidents only to appear hale and hearty the next day. A famous idol receives a miniature Gantz ball, and is issued a mission to find four keys, four people of which Tae Kojima is the fourth, that will get her into the Gantz room. Underground, a group of mysterious men in black also watch over the Gantz game, and are determined to obtain this miniature Gantz ball. And Masaru Kato is actually still alive! 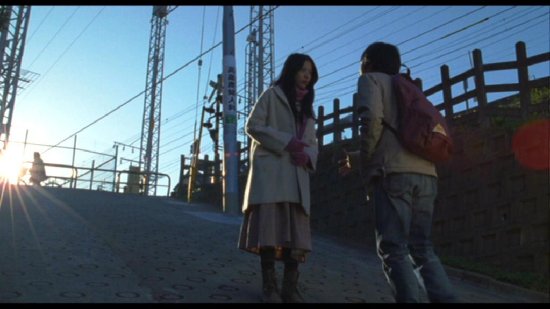 Manga Entertainment released the first Gantz feature on Blu-ray and DVD, but due to disappointing sales, they have decided to release the second film on DVD only. Collectors everywhere will be gnashing their teeth. If you want Gantz 2 on Blu-ray, the US release will most likely be locked to Region A just as the first film was, will be lighter on extras, but will contain the English dub. If you want the Gantz 2 Blu-ray to match (in terms of content), the first release, you'll have to look to Australia to import, as Madman Entertainment authored both of the Gantz feature films for UK and AU release.

There is a Gantz 1 and 2 twin pack DVD collection released the same day as this standalone movie. 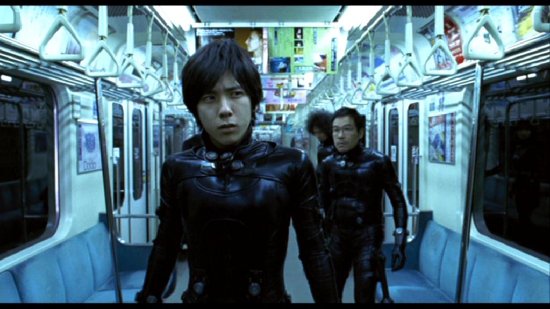 Gantz 2: Perfect Answer gets a 1.85:1 anamorphic transfer on this DVD. I remember not being too impressed with the image on the Blu-ray, and actually this film to PAL conversion of the movie comes across as not too dissimilar to that HD offering. Other than in terms of fine detail and overall resolution, the DVD offers the same flatter colours, washed out dark detail and a slightly higher than normal level of grain. While the Gantz Blu-ray was a somewhat lacklustre visual experience, the DVD of the sequel is a very impressive presentation for the format. If it was just the visual experience, I wouldn't be too down-heartened at having to take the DVD instead of the Blu-ray. The action steps up a gear in this sequel, the fight sequences are more intense and energetic, made so by issuing the Gantz fighters swords to complement their usual ray guns. Also in this movie, the comedy aliens of the first film are dispensed with, replaced by antagonists that look wholly human, making the fight sequences a lot more realistic and intense. 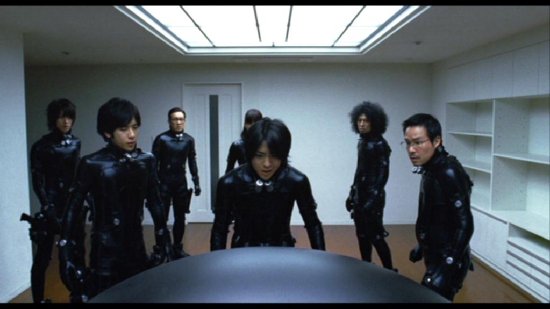 This is where the DVD falls flat in comparison to the Blu-ray. The Gantz Blu-ray has a thunderous DTS-HD MA audio track that asks you to go around and apologise to the neighbours the next morning. The DVD of Perfect Answer offers a dynamic and fairly aggressive DD 5.1 Japanese audio track, with optional English subtitles. The music drives the film well; the action sequences fill the soundstage, while the dialogue is clear throughout. It's just that in comparison to the Blu-ray, it feels like a whimper rather than a hurricane, and I found myself nudging the volume up to get the same level of intensity that I had to reduce the Blu-ray volume by half for. If anything will convince you to import, it's the audio experience.

Simple animated menus and a jacket picture herald a nice selection of extras.

The Making of Gantz: Perfect Answer does just what you would expect, taking us behind the scenes of the shooting of the film, with a fair bit of the subway action sequence, with input from the cast and the crew. This lasts 32 minutes.

The Fight Choreography featurette lasts 6 minutes, and consists of the pre-visuals for the subway fight scene, shot as a rehearsal with stunt men, with a rough idea of where CGI will be inserted.

Finally there is the trailer and the teaser for Gantz 2. 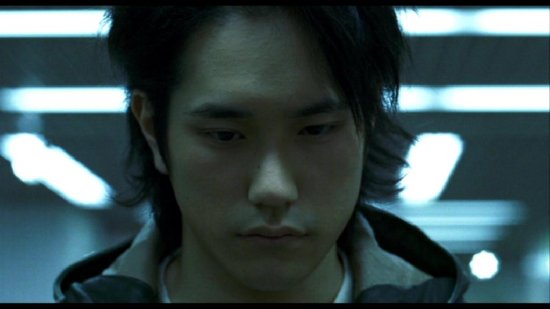 A movie sequel diverging from the original source material can either be a good thing or a bad thing. In this case, with the original movie merely a thin adaptation of the source, having the sequel go its own way proves to be a brilliant choice. You may still be stuck with the thin characterisations from the first film, the absence of the social satire, the absence of the sex, and the comparatively toned down uber-violence, but when you have the free range to craft a story of your own, you can on occasion come up with something as inspired, gripping, and enthralling as that in Gantz 2: Perfect Answer. 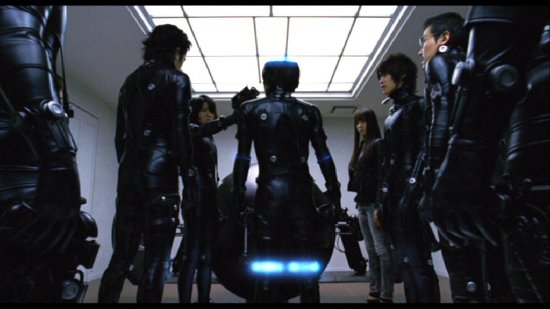 With the sequel, it's all about the mystery. Having established the Gantz game and it's twisted rules in the first film, the second film turns it all on its head, throwing the established routine out of the window, and introducing a whole new bunch of elements that make no sense given what we have learned. The film also begins by twisting the timeline a bit, so things happen out of sequence, making them harder to fathom, even though they make better narrative sense in that order. We also don't see any Gantz action for the first forty or so minutes. Instead we catch up with where the characters are, as well as establish some of the oddities that will resolve into the plot as the movie unfolds. Kei Kurono continues to play the Gantz game with his cohorts, trying to build up the 100 points that will resurrect Kato, but this happens off-screen. Instead we see his life with his almost-girlfriend Tae, and the fact that he's now supporting Kato's brother Ayumu. 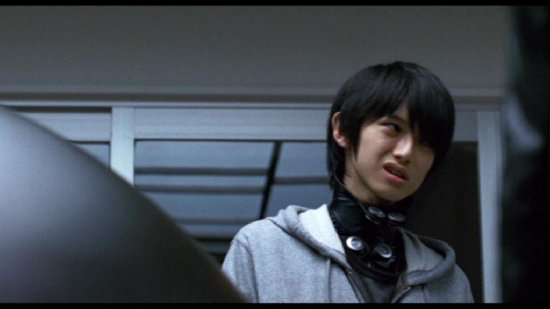 At the same time we get other pieces of the jigsaw, the lone policeman investigating the Gantz game, the idol with the mini-Gantz sphere, hypnotically pursuing her own specific Gantz mission, the men-in-black playing their own mysterious game with the Gantz sphere and the Gantz players as their target, and the shocking fact that Kato isn't in fact dead. To this point, the Gantz game was played out of sight, without affecting the public. During the game, the Gantz players, and the aliens they targeted were invisible to everyone, innocent bystanders never got involved. 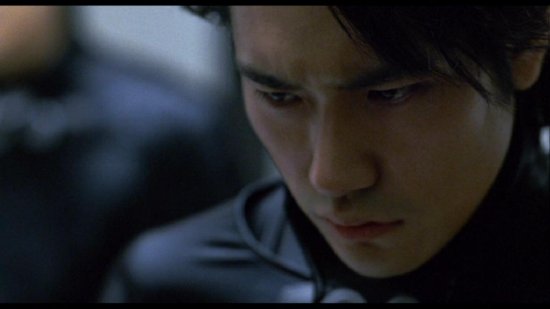 Suddenly, Gantz assigns a mission for Kurono and his team to hunt down the MIB aliens. Only this time the rules have changed. The hunt takes place in full public view, and this time the innocent bystanders do get involved. This change in modus operandi makes the film a lot more interesting, as the game suddenly has an immediate effect on the real world, and the players have more than just their own lives to protect. At the same time, the decision was taken to ditch the comedy CG aliens of the first film, and introduce the new menace as looking absolutely human. Not only does this cut down a little on the effects budget (there still is the need for a little CG enhancement), but it also makes the fight sequences more real, immediate, and physical. It looks stunningly more intense and effective. 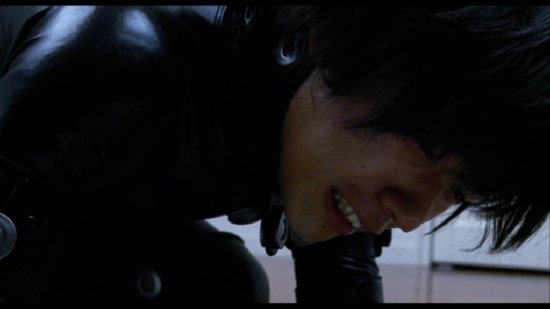 These are just the start of the unexpected twists and turns in the story, and the film goes in directions that I completely failed to anticipate. These were developments that had me glued to the screen, despite its 140-minute runtime. The first Gantz movie was a disappointment in that it was a rehash of the first part of the manga storyline, without any of the elements that made it so special. The second Gantz movie goes in its own direction, creates something new and unexpected, and by doing so delivers a great, popcorn action movie experience. There are disappointments, the truth behind Gantz is never revealed, a couple of characters fail to impact as strongly as first hinted, but the ending leaves enough ambiguity to make you hope for a Gantz 3. Still, the action is more intense, exciting and visual, while the effects are a step up from the first film. If anything, the sequel deserves a Blu-ray presentation more than the first film, if only for the kick-ass audio.