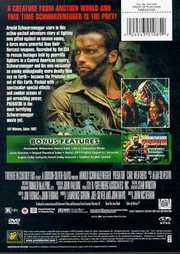 Back Cover of Predator (DTS) 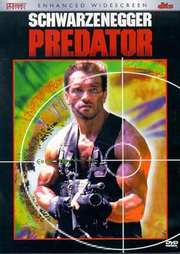 Nothing like it has ever been on earth before
Certificate: R
Running Time: 107 mins
Retail Price: $29.95
Release Date:
Content Type: Movie

Synopsis:
Arnold Schwarzenegger stars in this action-packed adventure story of fighting men pitted against an unseen enemy, a force more powerful than their fiercest weapons. Recruited by the CIA to rescue hostages held by guerrilla fighters in a Central American country, Schwarzenegger and his men encounter an enemy unimaginably more deadly than any on Earth - because the Predator is not of this Earth.

The 80`s is unforgetable era of hyper action movies & immortal heroes, like Sylvester Stallone`s legendary Rambo & Rocky + Chuck Norris, Jean-Claude Van Damme, Sven-Ole Thorsen and many others, but there can be only one and he`s the star of the Austria, Arnold Schwarzenegger.
Arnold Schwarzenegger`s filmography includes many great action & adventure movies, like Conan The Barbarian, which is my 2nd favourite Arnie movie, the 3rd is Terminator 2 Judgment Day, 4th Total Recall and 5th Commando, but the greatest of them all is 1987`s Predator, which has got all the greatest elements that I like. It`s mixture of Sci-fi, Aliens, Supermuscle heroes, Nonstop action with spectacular special effects and combat scenes of gut-wreching power.

The cool story is written by Jim Thomas & John Thomas and producers are Lawrence Gordon, Joel Silver + John Davis. The director of Predator John McTiernan (Die Hard, Die Hard With A Vengeance, Hunt For The Red October) does a great job with the awesome crew of commando`s and he`s also one of the greatest action directors who`s able to create interesting characters. Arnie`s (Dutch`s) group is gathered from legends like Sonny Landham (Billy), Carl Weathers (Dillon), Bill Duke (Mac), Jesse Venture (Blain) and many other superb individual`s. When they all are in the middle of jungle`s hell, fighting against the invisible enemy that hunts them down one by one the movie couldn`t be any better.

The Predator was actually my first Dvd order, but some reason it never came and I forgot to reorder it.
Now that the "new" Enhanced Widescreen Predator dvd with Dts had arrived, I decided to get it at once. Predator appears in an aspect ratio of 1.85:1 on this single-sided, double layered dvd and the image has been enhanced for 16x9 televisions. I don`t know what kind of picture quality did the old dvd had, but this looks quite good, with clean nice green jungle colours and the sharpness seemed consistently fine. Sometimes the sharpness was missing and it looked a bit dirty, but luckily there were only few this kind of scenes. I compared the picture quality to the vhs and it seems that those dirty scenes are in the original print and to make them look superb is quite impossible. The video quality is almost as good as it can be and after watching the mess from the vhs, the dvd looks pretty damn good.

This new dvd of Predator provides three different audio`s. First we get the English & French Dolby Surround 2.0, which is quite ok, but the sound effects are too loud and there`s no good balance.Second there is Dolby Digital 5.1 which sounds pretty good with nice balance with the music, effects and talking. Third we get the superb mastered Dts, which sounds louder and clearer than DD 5.1, so that all the sound areas are in excellent balance and you``ll be suprised how good can the old Predator sound. The Dts is so good, that it makes you jump from your chair and the feeling is unbelieveable and beyond.

The menus are silent with Arnie`s picture on the backround, but as we all know Twentieth Century Fox is capable of creating cool animation, so why can`t we get anything cool among with the menus.
The extra features are poor, having original theatrical trailer and nothing else, but you`ll be satisfied with the overall value of this disc. So, buy it, because the Dts audio rules.

One of Arnie`s better 80s action flicks, Predator has been on my `to buy` list for years now. Since DVD has come along I have bought more films in a year than in ten years of VHS purchasing, and I was hoping this was going to be the definitive version.

Unfortunately, I am a little disappointed with a couple of aspects of this disc, not least the video quality. Predator is presented in 1.85:1, and is anamorphically enhanced, which is an improvement over the previous release. The trouble is that the video quality varies so widely throughout the film, it becomes very distracting. The Fox logo at the start is appalling, and full of grain, and the opening scenes are covered in scratches and dirt. Things do get better after that, but there is still some grain evident. Around the 40-50 minutes mark the picture becomes far more akin to the DVD standards I`m familiar with. The image is sharp and detailed, but just as I was getting into it, up pops grain-o-vision again. Why the video quality is so variable is anyone`s guess, especially as the previous release was supposed to be quite good.

Sound is handled fairly well, with some nice surround effects on the DD 5.1 track. The surrounds are well used during the set pieces, with the explosions and bullets flying around the room, and there are some other nice spot effects too. I didn`t test the DTS track, as I don`t have a suitable decoder.

Extras are very thin on the ground, just the theatrical trailer in fact. I enjoy watching the trailers for films of this age, as they were far more simplistic and didn`t give away most of the set pieces like the trailers of today. The inclusion of DTS, while not really an extra, accounts for the score below.

Overall, an enjoyable romp with some good set pieces, but not a lot in between. There is a fair amount of tension as you wait for the Predator to eviscerate its next victim, but this one is really all about the fireworks. As far as action films go, Arnie really had no equals during the 80s, and in spite of him not being the world`s best actor, you have to admire the man for all he`s accomplished (even if all of his recent films have been crap). A good film for a night in with beer and pizza, and it would have scored higher if only they`d sorted the video out. Oh, and I’d forgotten just how corny that ‘Stick around’ line was!
posted by Chris Gould on 10/3/2001 23:22
8 / 10

FILM: Although it may be hard to believe, Predator is almost 14 years old. Fortunately, it has aged very well, and apart from the two Terminator films, it is probably Arnold`s most accomplished movie to date. Look beyond all the gun-ho action and you`ll see a movie with excellent special effects (even by todays standards) and some very solid character development. McTiernan does a brilliant job of creating some highly distinguished and likeable characters, then eliminates them one by one until only Arnold remains. The `Predator` has become one of the most memorable alien adversaries of all time. Congratulations must go out to the brilliant mind of Stan Winston who created this great monster. Predator is a movie that was widely seen as bloody and violent, being viewed as nothing more than the average `80s Arnie action flick. In contrast, I believe it is easily one of the best and most complex action flicks of all time. It definately beats Arnie `no-brainers` such as Raw Deal, Commando and Jingle All The Way.
PICTURE: Anamorphic Widescreen 1.85:1.
There has been a lot of fuss in other reviews about the varied quality of the anamorphic 1.85:1 picture we have here. Generally, the initial scenes that take place before Arnold`s team arrive in the jungle look a little grainy and well used. Many scratches and white flecks are noticable and the picture is very soft looking. However, things improve when the bright sun comes out, illuminating the vibrant green jungle and rosy flesh tones of our leading men (chapter 5 onwards). Sharpness improves a great deal and only rarely do we see the odd grainy shot. Overall, pretty good for an old movie, but hardly spectacular by the standard set by newer movies.
SOUND: DTS 5.1, Dolby Digital 5.1 and Dolby Stereo 2.0 (English and French).
The sound is definately this discs strong point, with both the DTS track and Dolby 5.1 sounding great. A 2.0 soundtrack is also available, which is good as well, but dialogue tends to range from being a bit harsh to bit hollow. The action scenes shine through with superb clarity (see chapter 6) and really get the adrenalin pumping. Inevitably, the DTS soundtrack sounded the best, with Silvestri`s dramatic score sounding richer and louder than it does in Dolby. Gunshots and explosions are also clearer and more defined, with bass management sounding a lot better. Overall, whichever track you select, you won`t be disappointed- just enthralled by its brilliance.
EXTRAS: Hmm. How about chuffin` dodgy? A barebones disc that avoids extras like the plague. All we have is a theatrical trailer, which is very brief but well made and not too revealing.
OVERALL: Since this disc is a re-issue of the previous non-anamorphic release, I`m assuming that Fox will not be releasing a two disc special edition; this is as good as it will get. My advice to fans of Predator is jog it to the shop and buy this disc.
posted by Richard Knowles on 11/3/2001 09:58
8 / 10

predetor is one of the best arnie film`s around,from the discovery of the skinned bodies to the suspense filled fight
with the predetor it`s self as for the disc the only extra is mere
trailer,predetor should get fox`s 5 star collection treatment
the picture and sound are fine.
posted by verhoeven on 12/11/2001 19:18
8 / 10