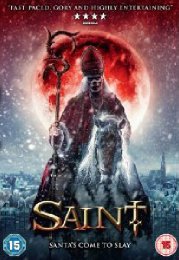 Saint Nicholas, or Sinterklaas (hmm…), is still a great tradition in the Netherlands and despite commercial pressures, has not yet been overtaken by the more traditional Father Christmas, or Santa Claus, tradition prevalent in the UK. Saint Nicholas is thought to be a Spaniard in origin and visits the country on his December 5th birthday to leave presents for all the children who have been good that year. But there's a catch. Sinterklaas has mischievous Moorish helpers called Black Peter (Zwarte Pieten) who scoop up all the naughty children and take them to Spain.

It's December 5th, 1492AD and Sinterklaas is a corrupt Catholic Bishop who visits various towns and villages on his travels to pillage and murder with his gang of helpers.  One village has had enough and kills them all as they rest from their hard labour by setting fire to their boat and burning them alive. This doesn't stop Sinterklaas and his gang though, who reappear as murderous ghosts every time a full moon coincides with December 5th.

Appearing in 1968, Sinterklaas kills hundreds of people along with the family of young Goert, the sole survivor of the massacre. Goert (Bert Luppes) grows up to be a jaded, cynical policeman who is simply biding his time for the next appearance of Sinterklaas but can't seem to convince anyone else of the impending danger.

Meanwhile, young student Frank (Egbert Jan Weeber) is unceremoniously dumped publically by his girlfriend Sophie (Escha Tanihatu) during a Sinterklaas present giving ceremony in school. Sophie ostensibly dumps Frank for his bike shed shuffle with fellow student Lisa (Carlo Lensen), although she doesn't know it's her friend Lisa he cheated with, and she's also been cheating on him for the last two and half months.

Frank takes it on the on the chin and tries to get in with Lisa, but she's not quite sure what she wants, much to Frank's chagrin and he seeks solace with his friends who all make a quick buck at this time of year by dressing up as Sinterklaas and his helpers.  It's not long though before bodies start to drop and Frank is mistaken for the mystical ghostly apparition of a Bishop and charged with multiple murders.

However, due to a rather bizarre squad car chase of a horse riding across the rooftops that falls and squashes his policemen captors and their car, Frank manages to walk away and set out to clear his name - bumping into the driven but slightly deranged Goert and his boat of high explosives…

There appears to be a lot of model work in this and some CGI, both are rather obvious but work in their own way. There is also more than a few errors in the subtitling, either words missing or misspelled - not enough to distract fully from the enjoyment of the film though.

Great soundtrack to this film as well, lots of symphonic rock with fast guitars, synths and huge drums.  I loved it.

Sint is a brilliant piece of fluff with enough gore to keep most horror fans sated but with a fine sense of humour that draw others in. As B-Movie's go, this is another in the tradition of thin plots and lots of cartoon-like violence but with a lot of added blood and severed heads. I was never scared, although I did jump at the expected point which was more reflex than anything else.

The acting is nothing to write home about, it's pretty naff but it fits the style and tone of the film brilliantly. The script also has some lovely touches and fine jokes. One of my favourite bits is still the sight of a squashed police car with horizontal splayed wheels after Sinterklaas' horse landed on it, very Hanna Barbara. The CGI is good enough for the budget and director Dick Maas gets away from the almost racist stereotyping of Zwarte Piet (still a little controversial in the Netherlands today) by ensuring that they're only black because they've been burnt to a crisp.

One great story about this film is that Dick Maas was taken to court by some concerned parents who wanted the film's advertising posters removed as it showed Sinterklaas with a mutilated face. Maas won his case by arguing successfully that if parents could manage to make their children believe in Sinterklaas in the first place, they should have no difficulty in convincing them that the figure in the poster was not the real Sinterklaas.

It is fluff, let's make no bones about it, but it is a funny film that is a little violent and gory but in no real way scary. I loved this film and found myself laughing most of the way through it. This is great Metrodome release and another almost Christmas movie with a difference to be added to the likes of Gremlins and Die Hard as alternative Christmas viewings, yippee-ki-yay mf…