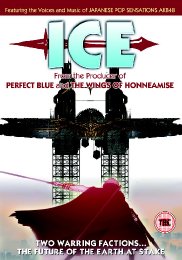 I have the utmost respect for labels that bring anime to the UK. It's a niche product at best, not the sort of product that makes bank managers smile, and a headache to licence. It's not just a matter of getting the anime from Japan and sticking it on a disc, you usually have to wait for the US to licence and create a dub, or at least subtitle it, and then you have to wait on someone like Australia to make a PAL version of it, all because the UK market is so small, that unless it's a mega title, it will never sell enough to warrant that much domestic expenditure. One of the wheels is bound to fall of this delicate vehicle even before contracts start being 'adjusted'. It's amazing that companies like Manga, MVM and Beez still persevere at bringing my favourite medium to the UK.

So many times, labels have tried their hand at anime, only to give up after a few discs, VDI only released one volume of Initial D, Fabulous Films just released one volume of Inuyasha, Artsmagic released Salaryman Kintaro and little else. Then, even when an established anime company tries to give the UK an exclusive, those contract adjustments lead to delays, and then the licence equivalent of a gazumping. Beez is currently experimenting with subtitle only releases, and when they licensed Durarara!!, they would have been the first in the West to release it, except their release dates kept getting pushed back far enough that Aniplex in the US managed to dub it and release it before the UK release was complete. A similar thing happened with Sound of the Sky, initially announced by Beez, but receiving a deluxe boxset in the US from Nozomi in the interim. 4Digital Asia's first anime release was supposed to be Rin: Daughters of Mnemosyne, sub only, but that went out of the window when Funimation licensed it in the US and created a dub. We only saw it in the UK years later when Manga finally released it.

And now we have a new label releasing an anime title in the UK. Cine du Monde is a fresh new look at world cinema, going after the titles that get lost in the scramble for the more mainstream of releases, films like Sion Sono's Suicide Club. Ice is only their fourth release in all. They're releasing this 2008 OVA on DVD in subtitle only form, and if we as anime fans are to expect more anime from Cine du Monde, we have to make it worth their while. After all, even established anime companies like MVM and Manga have stated that their live action titles sell an order of magnitude better. It's all down to shifting units, which won't be made any easier as Sentai in the US recently also licensed Ice but also announced an English dub. Still, we may not get the dub, but we do get it first. Of course there is a flipside to all that, as Cine du Monde have to make it worth our while by releasing something worth investing in.

By 2012, pollution, disease and warfare have laid waste to the world, man is extinct, and only woman is left. Even women have a precarious grip on the world, the death of the last man dooms the species to extinction, and the remaining women devastate the world further in more wars. Some die through famine, some die through despair, and all that are left are 20,000 in a forested enclave in what used to be Tokyo's Shinjuku. Yet even with doom staring them in the face, conflict divides the 20,000. The Kisalagis are those who accept their fate, indulge in pleasure and hedonism in the safe knowledge that extinction is looming. On the other side are the Guardians, who strive to somehow rescue humanity through science, thus restoring the future. That last hope is ICE, and both sides will battle to control its mysteries. But against all this conflict, mankind's true hope may lie in the unlikely friendship that forms between the Chief Guardian Hitomi and Yuki, the daughter of the Kisalagi leader.

I received the feature on a dual-layer DVD+R, which has the menus and presentation of what looks like a final retail disc, but its specifications shouldn't be taken as gospel.

Ice is presented in the original 4:3 aspect ratio, and it's an NTSC-PAL standards conversion, with occasional blended frames, and a degree of softness. In fact the softness was a tad excessive for even a standards converted anime disc, giving the show the feel of something a good deal older. That turns out to be something of a theme with Ice, as the animation is decidedly retro, even laced liberally with CGI as is it is. The character designs are angular and elegant, somewhat reminiscent of Yoshiaki Kawajiri anime, although not as boldly defined, and the animation itself is rougher than most modern productions, having a hand-drawn feel to it. The PR blurb states that Ice will have a 5.1 surround track, but the check disc only had the audio in DD 2.0 Japanese flavour, with optional English subtitles. The dialogue was clear, and the action came across well. A major selling point for this anime is the casting of the j-pop group AKB48 in the lead roles, and while I wasn't immediately sold on their performances, their pop music certainly plays a part in the show. The subtitles are timed well and free of error.

The disc is presented with animated menu screens. You can choose to play the film with or without the subtitles, while in the extras menu, you'll find both the Japanese and US teasers and theatrical trailers. The big extra is the Ice Goes Global featurette. This runs to 14 minutes, with soundbites from film-goers in the various film festivals where Ice was exhibited, and interviews with the cast and crew, and at length with the writers. This featurette concludes with the full-length stage performance of the film's theme song from AKB48.

I liked Ice. I liked it a lot more than I really should have, given the overall quality of the animation, the story, the characters, indeed the writing. Coming at it from the perspective of a 21st Century fan, with hours and hours of more accomplished, and indeed smarter anime in my collection, Ice is woefully retro in style, outlook and execution, while the writing fails to live up even to that standard, with a story full of plot holes, inconsistencies, and contrivances. To top it all off, it's framed in the worst sort of narrative device, the same device that had me throwing soft furnishings at my TV screen at the end of Legend of the Four Kings.

It's not the premise that perked me up, although the idea of a world only populated by women is enough to raise a few smirks. I once saw an Eastern European sci-fi film with much the same premise back when Channel 4 still had the red triangle… But if you're coming to Ice in a Beavis and Butthead frame of mind, then prepare to be disappointed. For the creators, and indeed anyone watching, it's pretty obvious what a world full of women will have to do for sexual pleasure, so Ice doesn't dwell on it, accomplishes by implication rather than explicitly, and focuses more on the characters and their relationships. It also gives it more time for the story, and the blood and guts violence that really earns it its 18 rating.

It's one of those stories where you get thrown in at the deep end. We join a squad of guardians on their way to deal with a bio-terrorist attack, we don't know who is who, what the factions are, or what the story is about, it's full on action all the way, and we're expected to piece things together as the story unfolds. This is usually a cool way of doing things, and keeps the audience on its toes. But the problem with Ice is that it lacks the narrative flow, and the cohesiveness of story to really make this approach work. It's stop and start all the way, with everything that happens at first seeming like a narrative non-sequitor. Too often I was scratching my head at what was happening, wondering what it meant in the scheme of things, and frustrated when no answers were forthcoming, or if they did, it was so long after the event that it didn't matter.

Also, Ice feels like a story that was made up as the writer went along. There is a lot of wasted ideas and effort in it, moments just to look cool that make no sense, narrative ideas that hold the attention for the moment, feel that they may have some import, but then are forgotten. There are moments that allude to genetic engineering, the odd life cycle of some sort of plant-bird hybrid. There are the Guardians piloting mecha into battle that are only ever seen in that one scene, never again, there's the revelation of the Kisalagi leader's true nature, which has no bearing on the story, just serves to shock. Jargon and technobabble is thrown around with abandon, and rarely explained and developed. Ice is a story that really needed another few iterations of the script writing process to distil its fundamental elements before being animated. As it is, it's really just another post-apocalyptic warning, a sermon on the evils of man destroying his own environment, with too much to say, and no coherent way in which to say it.

But then there is the violence, which is exquisite, and what persuaded me to re-evaluate this OVA. Heads exploding, dismemberments, impalements, people being torn apart… it's all so reminiscent of the anime that I used to watch back in the mid-nineties, the 18 rated tabloid fodder that was the mainstay of Manga Video. And that's why I appreciate Ice so much. It's deliciously devoid of most of the clichés that inform modern anime, there's no moe, no pigeonholed characters, none of the tropes that are in vogue right now. The thin characterisations in Ice, the 'everything plus the kitchen sink' approach to the story, the inchoate narrative and most especially the sex and violence all hark back to the shows that shaped the anime fan that I am today. Watching Ice last night gave me a warm nostalgic feel, put me in mind of those old shows like Angel Cop and Genocyber, shows that never were the pinnacle of their art, but gave a visceral hit of entertainment that bypassed the higher brain functions and instead stimulated something more primitive and basic.

Ice has that same nasty sense of fun to it, and while audiences with more modern sensibilities may not see Ice's appeal, fans who were there for that first anime invasion of the nineties will be able to appreciate Ice on that nostalgic level. Sentai may be dubbing Ice for US release, but if they don't use a time machine and give it the full Manga Video treatment, complete with excessive and ill-judged profanity, and monotone actor performances, they won't be doing it full justice. Incidentally, if you are fluent in reading French, Ice has a Blu-ray release in France.﻿