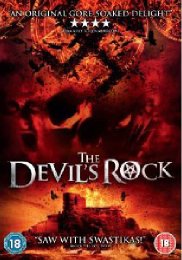 DVD
The House of the Devil
Related Articles

Allied Command has sanctioned a series of operations in the Channel Islands designed to distract the Germans from the coming invasion of France. Two Kiwi members of the elite commando arm are sent to Forfar Island, 5 miles NE of Guernsey. Upon reaching their destination, a foreboding concrete bunker with an artillery piece, the saboteurs are partially distracted by piercing screams within the complex, both male and female. It would appear that the Nazi incumbents are sadistically torturing people.

Sergeant Joe Tane (Karlos Drinkwater) just wants to destroy the gun emplacement as per their mission and head home, with impending leave and a rendezvous with a lumpy jumper. Joe even wants his mate to come along as his
female soldier date has a friend, but Captain Ben Grogan (Craig Hall) isn't interested. He's still grieving the loss of wife Helena (Gina Varela) in a London air raid a year previous, and besides his curiousity and disgust at the incessant screaming have piqued his curiousity. Ben has already taken out a German soldier who stumbled upon him at the gun emplacement but strangely felt
relief as he died.

Ben sets off into the dark complex, following the screams through a maze of long, dark corridors and finding the concrete bunker littered with the remains of bodies of German soldiers. Joe is left by himself for a short while, but decides to go and help his superior officer, ending up in a small compartment where he finds some intelligence that may be use. Unfortunately, he is ambushed by Colonel Klaus Meyer (Matthew Sutherland) and killed. Grogan nearly meets the same fate as his mucker, but manages to get the drop on Meyer and is only dissuaded from killing him when Meyer explains what is going on.

It turns out that SS man Meyer is on the island under direct orders from Hitler to investigate the occult. Meyer has found a copy of the Grimoire, or Book of Demons, and has managed to summon a succubus from Hell. What he hadn't realised was how insatiable and devious the succubus could be, devouring the majority of the small garrison before it was chained in iron, the only substance that can hold it. Meyer's mission was to let it loose against the Allies but now seemingly sees the error of his ways and is looking to Grogan to help him banish the demon back to Hell.

It won't be easy though, the succubus can see into the soul and very quickly takes the form of Grogan's dead wife in order to try and persuade the commando to let her free...

5.1 Surround soundtrack that is much louder than usual, so loud that I had to turn it down from my more usual volume level. It doesn't help, of course, that the beginning of the film features a quite powerful pulsating bass sound that is slightly inappropriate considering the time period of the film.

Essentially a four part Making Of, split up into the following segments:

Development - this includes a time lapse film of the set(s), which is an interesting feature. Also talks about how British director Campion ended up in New Zealand to make this.

I have to admit that I'm not sure I would actually categorise this as a Horror film. Maybe because I've never really liked Horror films, recoiling from them in disgust for most of my life. I do, however, like supernatural thrillers, which can get a little gory now and again, so maybe there's a little bit of crossover appeal going on here. It's not like it's grindhouse, which seems to be where most Horror/gore fans get their kicks these days.

This is quite a nice small and well imagined genre piece that should appeal to most who like low-ish budget films and a mix of Nazi's and demons. It's a very self-contained film with only five characters in total, or six if you count the guy who is slumped in a corner for most of the film with a rifle shoved down his throat (and he had to hold that position for ages...).   Once the film is underway, there are really only three speaking roles and two main sets but it works beautifully as a very claustrophobic piece.

All the actors perform well enough, even Karlos Drinkwater who only lasts about 10 minutes. The main trio of Hall, Sutherland and Varela are rather superb with what is essentially a dialogue-driven script. Sutherland was of some concern to me initially in that the glimpse I caught of him, I actually thought it was Mark Williams from The Fast Show, and was therefore expecting a comedy German accent. Luckily it was nothing of the sort and the clipped terse accent was exactly what the part required, as well as a completely straight performance. Valera deserves some kudos for being in prosthetics for the majority of her performance and almost nude for the rest.

Overall this is quite a nice little film, with a mounting air of foreboding from a rather conventional war film start. It reminds me a little of both Hellboy and also TV Sanctuary in its premise of demons unleashed by Nazi's, although you could also reference Raiders of the Lost Ark as well at a push. Although there is plenty of intestinal tract by Weta Workshops on display (ably shovelled into a bucket by Sutherland), it's not really a gory film and therefore shouldn't alienate those like me who hate gore for gore's sake. What we have is a nice little ensemble piece set during WWII and with a supernatural/occult feel to it, which is no bad thing.