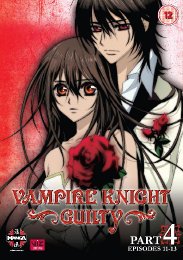 It was the last show that I ever expected to be hooked on. After all, Vampire Knight with its moody, elegant vampires, relationship angst and character designs that emphasise prettiness above all else, all add up to a recipe that should have me looking for a quick exit. I'm the kind of person who needs a Clockwork Orange style indoctrination before I go anywhere near a Twilight movie, and the mere mention of Anne Rice has me screaming for the hills. Yet there I was, tuning in on a monthly basis as Manga Entertainment dished up yet another volume of Vampire Knight and subsequently its sequel Vampire Knight Guilty. All the sickening ingredients are still there, but this time they've been put in the hands of a chef who knows what they are doing. I've been growing more and more addicted to the show with each volume, and now that the conclusion is here, I'm beginning to dread the inevitable withdrawal symptoms. I'm even considering watching Interview With A Vampire. 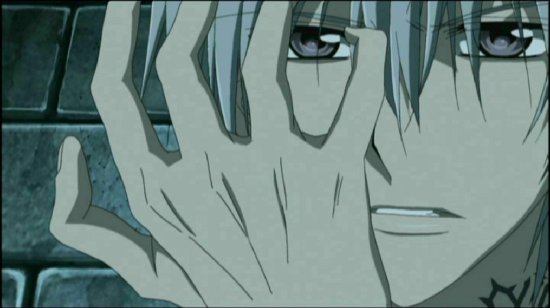 The Cross Academy is a boarding school with a difference. It's also the venue for a unique social experiment, where vampires are trying to co-exist with humans. Of course the humans can't know about this, so the school is divided into the Day Class and the Night Class, and the only time that the human students interact with the vampires is at twilight, when the classes change and the Day Class return to their dorm. All they know is that the Night Class is full of handsome boys and beautiful girls, aristocratic and elegant. It's down to the Guardians to keep from the Day Class from learning the truth about the Night Class, two students, Yuki Cross and Zero Kiryu who have to protect the humans, should the worst happen. The school's headmaster adopted Yuki when she was five, after a trauma that left her with amnesia, while Zero's own traumatic past has left him with an abiding hatred of vampires, and a secret that he keeps hidden. 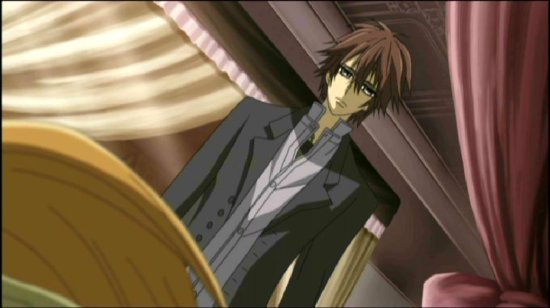 The first series introduced us to the volatile triangle of Yuki Cross, Kaname Kuran, and Zero Kiryu, and the complex world that they inhabit. It's volatile as all three are conflicted by their pasts, but most of all Zero, who after the attack that destroyed his family, was left with the inevitability of becoming a vampire and degenerating into a monster. As the previous series concluded, the vampire that attacked him, Shizuka Hio, returned to complete her vengeance, not least by revealing that Zero's brother was still alive, but now her loyal servant. It also transpired that the 'cure' for Zero's affliction lay in Hio's blood, but it was cure that he chose to shun. As the previous series concluded, Zero was on the verge of becoming a Level E, when Kaname approached him with an offer. 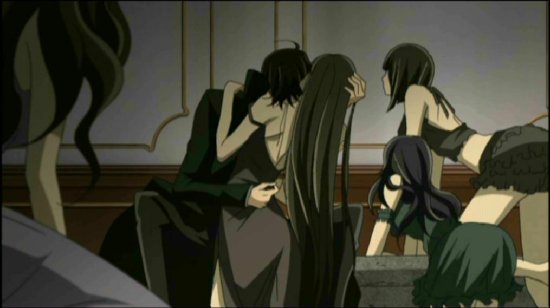 The concluding three episodes of Vampire Knight Guilty are presented on this disc from Manga Entertainment.

11. Two Souls
With Rido Kuran expanding his influence over Cross Academy, increasing his power, and putting into effect his plans for Yuki, it's time for Kaname's weapon against him to go into action. But before Zero is ready to deal with the ultimate Pureblood Vampire, he has to first resolve his fraught relationship with his twin brother Ichiru.

12. World's End
Everything is unfolding as Kaname had planned. Almost everything. He didn't plan for Yuki to stand up for herself, and continue to act as a Guardian for the school, and he certainly didn't expect his ultimate weapon Zero Kiryu to be just as dangerous to him as he is to Rido. No matter what happens though, the conspiracies that have been blighting Purebloods, Vampires, and Humans alike, will be brought into the light and forced to perish.

13. Vampire Knight
So who will Yuki choose in the end, Zero or Kaname? 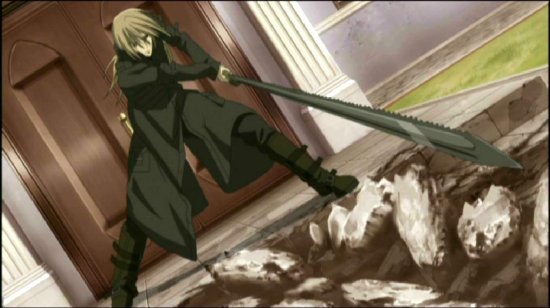 Vampire Knight Guilty gets a 1.78:1 anamorphic transfer, which as is often the case, is an NTSC-PAL standards conversion. Yet again, someone dropped a spanner into the conversion process, as it suffers from horrendous judder throughout. Any time there is any lateral motion of the camera, vertically or horizontally, the playback is subjected to an intermittent stop-start effect every half second or so. It's annoying, it's damned distracting, and it makes watching the show an utter chore. 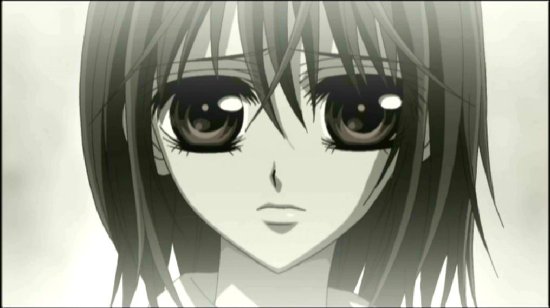 Vampire Knight and its sequel are series that are originally aimed at the wobbly-kneed demographic, so you can expect a whole lot of pretty male characters in this show, tall, elegant, moody, while aside from Yuki herself, most of the female character designs are fairly generic. The world design is stylised but effective and quite detailed, but I did feel that the overall animation was static, or it saved up most of the animation for the action sequences. This is a show where you expect to see a whole lot of rose petals fluttering past moody tableaux.

You have a choice between DD 2.0 Surround English and Japanese, with player locked signs for the English track, and player locked translated subtitles for the Japanese track. The sound is fit for purpose, and opting for the Japanese track, I found that a favourite voice actress of mine, Yui Horie was voicing Yuki, which certainly added to the show's appeal for me. The dialogue is clear, and the theme songs are the expected power ballads to go with the romantic vampire action. The surround sound is appreciated, but it's hardly a surround intensive show. The English dub didn't immediately strike me as amazing, but it's not immediately bad either. I'm sure dub fans will be perfectly satisfied with it. There needs to be an English cast credit reel after the programme, as the credits aren't translated. 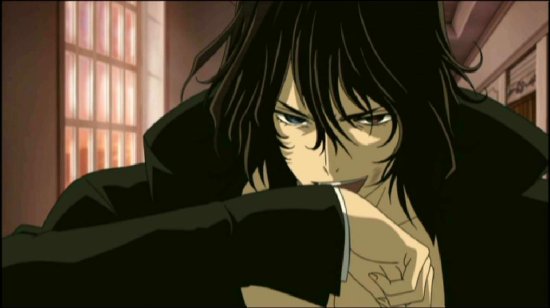 The single volume release format belongs well and truly in the past. On top of that, Manga Entertainment's Kaze sourced discs are a nightmare to navigate, and cursed with jerky NTSC-PAL conversions that make my eyeballs twitch in sympathy. Vampire Knight, and subsequently Vampire Knight Guilty have been annoying releases. Weighing against that is just how enjoyable this series has turned out to be. I have been looking forward to each new volume, and anticipating each new episode with an unseemly eagerness, especially given how I feel about the genre. When it came to this final volume, I sat down and watched all three episodes together, knowing full well that I wouldn't be able to bear leaving the conclusion hanging for any longer than I had to. 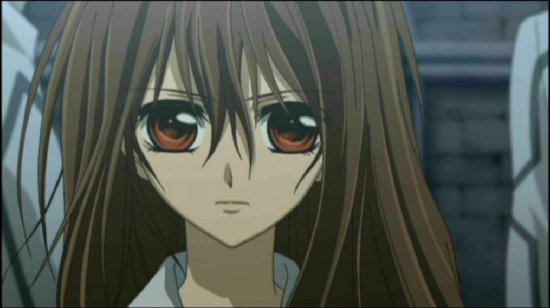 With the three episodes in this volume, Vampire Knight Guilty almost nails the conclusion. The series has been carefully plotted, intriguing story arcs explored and built up, interesting characters introduced and developed, and most importantly, the main triumvirate of characters have delivered an engaging and interesting tale. I came to this volume, determined to find out what would happen to Zero Kiryu, Kaname Kuran, and Yuki Cross. Unlike many anime series, Vampire Knight Guilty has had the space to breathe, to develop, and sufficient time in which to present the conclusion of its story, giving me the impression that it adapts a manga already completed, rather than a manga in progress. Unlike the average anime show, this isn't an ending that seems rushed or crafted at the last minute by the anime creators when a manga ending isn't forthcoming. 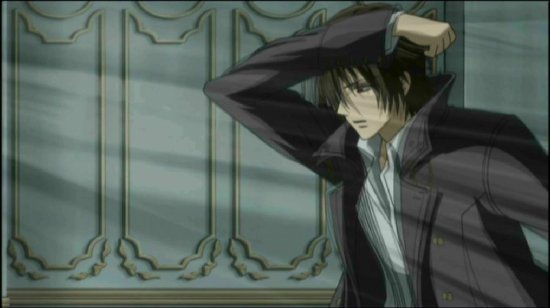 The first episode on this disc spends much of its runtime resolving Zero Kiryu's arc, settling the situation with his brother Ichiru, and finally allowing him to lay his tortured past to rest. The second episode devotes itself to the larger picture, sorting out the big conspiracy between the vampires and the hunters that lies behind this particular world of vampires and humans, supposedly coexisting. It also resolves the Rido Kuran arc, settling the story that began with an amnesiac Yuki being rescued by Kaname, and brought to the Cross Academy to be raised by the headmaster, Kaien Cross. 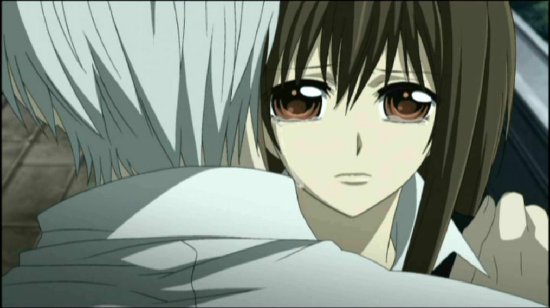 It's the final episode that serves to disappoint, as it is here that you think that the Kaname, Yuki, Zero triangle will be resolved. It is, in a way, and in another more important way it isn't. We get a partial resolution, before the issue is kicked into the long grass. The anime ends on an open note, with the expectation, indeed implication that there will be a resolution at a later date, in manga form at least, should the budget for another series not be forthcoming. It's the sort of open-ended conclusion that a lot of popular anime get, in the hope that a sequel will be made. The trouble is that very few series actually do get sequels, so we wind up with a host of shows on our shelves, all with non-committal endings. 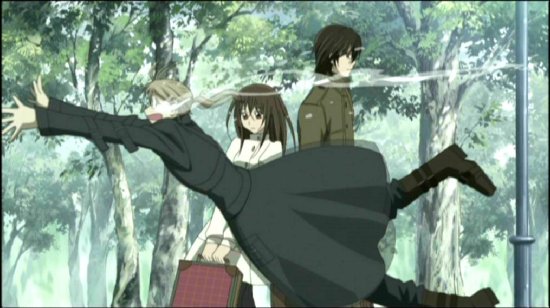 Vampire Knight and Vampire Knight Guilty have been two halves of an unexpectedly compelling anime series. It's been a timely reminder to me that it isn't necessarily the subject matter of a story that determines how good it is, but how that story is told, and how the characters are developed. The Vampire Knight story has been spun out in a thoroughly charming manner, while its characters have been rounded, well thought out, and above all, interesting. This is one show where the characters drive the story, not the other way around, and that makes a mountain of difference. It's just that the show stumbles, unfortunately somewhat predictably, at the final hurdle, that stops it from being one of my instant classic anime shows. An anime show that is released on eight, single disc volumes… How 2005! Who knows, maybe in a few years they'll make a sequel to this show that will give the story proper closure.