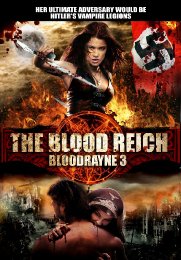 Blu-ray
Let the Right One In
Related Articles

As someone who loves both great movies (the ones that have a great deal of critical acclaim) and the ones generally regarded as B-movies, trash or schlock, my interests are far and wide. However, the only films I can't really get away with are stupid big budget blockbusters without any artistic merit, the ones directed by the likes of Michael Bay, Roland Emmerich and Brett Ratner. Another category, with a director all of its own are the low budget, straight to video films of Uwe Boll - a filmmaker who began his career exploiting a loophole in the German taxation system whereby it didn't matter how badly his films performed, because they were covered by 'German culture', his losses were reimbursed by the German taxpayer. Apparently, none of his films have ever been made for a loss and have all been made within budget and within schedule, which is why he is so prolific.

The latest film to come through my letterbox was Max Schmeling, his biopic of the great German heavyweight and one of the most renowned sporting legends in Germany. Just before then, I received the latest in Boll's long list of videogame adaptations: Bloodrayne: The Third Reich. Amongst the many films Uwe Boll has made are ones adapted from computer games, from House of the Dead to Alone in the Dark and Bloodrayne. The first film, made in 2005, featured Kristanna Loken as Rayne, whose mother was raped and turned into a vampire before her birth which means that Rayne is a 'daywalker', a half-vampire, half-human who has the strength, agility and thirst for blood of a vampire but isn't confined to a life in the dark and can operate in the sunlight and associate with humans, where her sympathies lie.

The films follow the videogames fairly closely, with the first film set in 18th century Transylvania, the second in the Wild West and this in the Second World War. Bloodrayne: The Third Reich begins on the Eastern Front in 1943 with a train carrying people to a concentration camp stopping at a station where some partisans, who have been told the train contains weapons, attack the German soldiers and break open the carriages to find there are no weapons. During this ambush, a strange woman who is extremely quick, agile and deadly with swords, appears and easily dispatches numerous soldiers before turning her attention to the Commandant, who she runs through with a pole. However, the attack doesn't go smoothly as a soldier sneaks up behind her and shoots in the head, causing her blood to spray over the Commandant before Rayne bites him in the neck and leaves him for dead.

The Commandant has been working with Dr. Mangler, a strange and fairly bizarre character who is your typical movie 'Mad Scientist' who has been doing research into vampires and is extremely excited when the Commandant shows all the signs of being a daywalker, needing blood to help him regain his strength and recover from the attack. Dr. Mangler's ultimate goal is to create a blood sample that will ensure the Third Reich will be immortal, as will Adolf Hitler, with men who are invulnerable, deadly fighters and will be able to take over the world.

Unaware her blood had entered the Commandant's mouth and turned him into a vampire, Rayne sticks around with the resistance fighters, killing German soldiers and generally doing their best to slow progress. For reasons unknown, Rayne begins to frequent a bordello enjoying massagers and Sapphic love trysts with a prostitute and, during one of her visits, is told of a German soldier treating one of the girls extremely badly. In the middle of her massage, she puts her robe on and goes up to the room, easily beating the soldier. However, word of this attack gets back to Commandant Ekart Brand and Dr. Mangler who wants her pure blood as the key for his research so, gathering men, they manage to take her prisoner.

Bloodrayne: The Third Reich is the opposite of Max Schmeling (in which everyone, including the Americans, spoke fluent German) as this is one of those films where all the Nazis, European resistance fighters and immortal vampires speak English, albeit with a variety of different accents. Natassia Malthe, who took over from Kristanna Loken, who decided she didn't want to make BloodRayne: Deliverance, speaks English fluently and without a heavy accent but has a dress sense that seems completely out of place in the various eras in which the films are set, probably due to the videogame (which I haven't played or even seen) than any aesthetic choice by Uwe Boll and has an incredible cleavage and an even more mind-boggling dress which is able to keep things in place, even when she's hung upside down!

As Dr. Mangler, Clint Howard seems to channel every mad scientist he's ever seen from Dr. Frankenstein in the 1931 and 1935 films and chews the scenery for all it's worth with a completely over the top performance. During the film, he does that mad scientist thing of talking to himself, explaining his research to people who shouldn't really be told and has extremely strange behaviour which alienates him from everyone else except the Commandant who tolerates him because of his research. No one else really puts in a performance of note, good or bad, as the bar is particularly low so no one stands out as particularly dreadful or so good they really shouldn't be in the film like this. Bizarrely, one of the women in the bordello has silicon enhanced breasts - something that certainly didn't exist in 1943!

The screenplay, by Michael Nachoff (his very first feature length screenplay) does its job but, quite frankly, this isn't a film in which you expect Shakespearean dialogue and great epic scenes so it is basically one of those run-of-the-mill videogame adaptation scripts in which there is no great characterisation, fairly leaden dialogue and humour that doesn't work (the final line is "Guten tag, motherf***ers", just to give you an idea). Uwe Boll's direction is of its usual low standard with scenes that run too long, aren't developed enough or are overly reliant on action to carry the plot forward.

I wasn't expecting greatness from this so wasn't disappointed when it turned out to be mind numbingly stupid and a chore to watch.

Before you get to the main menu, there are skippable trailers for other releases from Momentum Distribution: Bathory, Age of the Dragons and Barbarossa: Siege Lord.

In the commentary with director Uwe Boll and writer Michael C. Nachoff , Uwe Boll has made some commentary tracks in the past, but this is probably the first where he isn't on his own and is joined by screenwriter Michael Nachoff so they are able to cover more aspects of the production and the shoot with Boll extremely complementary about shooting in Zagreb, which is much cheaper and more accessible to a director than similar locations in Canada which wouldn't allow you to shoot in government buildings, museums or shut down streets with as much ease as he found there. You can say what you like about his merits (or otherwise) as a filmmaker, but there's no denying he can speak at length about his projects with enthusiasm and this is the case here with a fairly lively commentary track.

The Making of Bloodrayne 3 (28:01) spends the first four minutes cutting quickly from actor to actor, crew member to crew member and back again, chopping sentences in half before settling down and featuring short interviews and plenty of clips from the film and some B-roll footage. It appears to be a promotional piece which would have had commercial breaks as the same people have captions telling you who they are and their role in the film. Also, they don't go into much detail about the plot but has actors talking about their characters with Uwe Boll saying how good they were and the advantages of working with a good stunt coordinator. The whole thing is presented in 4:3 (with stereo sound) with just about everything pillarboxed to varying degrees.

Interview with the Writer of Bloodrayne 3: Michael C. Nachoff (6:01) is also presented in 4:3 and pillarboxed as the interviews is 1.78:1 widescreen and the clips from the film are 2.35:1. The interview isn't particularly illuminating which is unsurprising as it is fairly short and shot entirely in what appears to be his office. Unsurprisingly, Nachoff defends Uwe Boll, saying that the criticism is unwarranted and is by people who are upset that his films don't fit into the zeitgeist!

As he discusses at length in the commentary, Uwe Boll shot this entirely digitally despite the rather cumbersome nature of the camera as he found it much easier to evaluate takes and allows the actors to play with their lines, doing several takes before they found their best work without Boll having to worry about film stock or when he would get to see the day's rushes.

The end result is a very clear picture with very good contrast levels so detail remains high in low light situations - of which there are many - and colours are nice and bright, though not overly vivid and out of place. Some of the set decoration is a little unconvincing, as are the costumes, but the production design and locations are pretty good, using Zagreb to good effect.

When it comes to the SFX make-up and occasional CGI for the vampire attacks and bloodletting, these are accomplished fairly well with plenty of fake blood and well designed wounds.

You have the choice of Dolby Digital 5.1 surround or 2.0 stereo English, both of which present the dialogue clearly and do a reasonable job with the atmospherics and score. However, due to the numerous action sequences with explosions, gunfights and hand-to-hand combat, the surround track clearly has the edge and uses the front and rear surrounds fairly well although this is basically sound mixing 101 and isn't the most impressive or innovative track you'll ever come across.

The menu has some extremely loud rock music which basically sets the tone for the film as the music, by Boll's composer of choice, Jessica de Rooij, isn't the most nuanced or atmospheric composition you'll ever hear but is one of those that tends to be overly loud in parts and, when it comes to action sequences, makes everything extremely loud.

Bloodrayne: The Third Reich (or, to give it the title on the UK DVD, The Blood Reich: Bloodrayne 3) is unlikely to win Uwe Boll any new fans and those who have despaired at the quality of his previous work will probably give this a wide berth, yet those who like his quickly made and low budget movies will probably quite like this. I don't think anything I say here will affect the film's audience as those who want to watch it, will watch it and those who can't think of many worse ways to spend an evening than watching an Uwe Boll film won't bother with this.

It is an utterly uninspiring and dispiriting experience that does nothing to enhance Boll's reputation, just reaffirming my opinion that quality is not top of his list and, if a film can contain action, blood and nudity, it will. Although the disc contains a commentary, the other extra features are low quality and don't contain much in the way of additional information. The AV quality is better than I expected, but it is far from the most accomplished piece of filmmaking ever released on DVD. If you want a decent vampire action film,, watch one of the Blade films.