DVD
No Trees in the Street
Related Articles 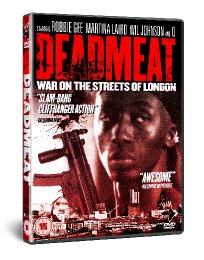 Synopsis:
DEADMEAT, based on the cult novel of the same name, is the critically-acclaimed, highly-anticipated, gritty Urban thriller taking London's underground scene by storm as it arrives on DVD on 7 March 2011.

Award-winning writer, director and producer 'Q' steers action-buster DEADMEAT through the gripping story of ex-con Clarkie ('Q') who learns on his release from prison he's been set up by his brother Bones (Bovell). Within a week, Bones is found hanging, the suspected victim of a notorious cyber-vigilante who hunts down paedophiles online.


Still smarting from Bones' betrayal, Clarkie refuses to accept the police's paedophile verdict on his brother, setting in motion a series of shocking events. As Clarkie sets out to solve the crime and quickly discovers that a price has been put on his head, who can he trust? Was his brother framed? Will the cyber-vigilante strike again? And can Clarkie survive a turf war with coppers on his trail? One wrong turn and he's DEADMEAT.

Winner of Black Filmmaker's Best British Feature, DEADMEAT is a must have for your DVD collection, released 07 March 2011.