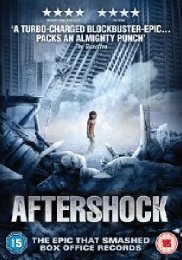 DVD
City Of War: The Story of John Rabe

Article
Dragon Hunter - A Hero Becomes a Legend in May

Article
North Face - The Ultimate Test Of Man Against Nature

Article
Before the Rains Arriving in March from Metrodome

Article
The Heart of the Earth
Recently Added Items

It's every parents worst nightmare, the impossible choice of choosing which of your children to sacifice to save the other. This choice is the central core of Assembly director Xiaogang Feng's latest blockbuster Chinese film, Aftershock. Set in 1976, the town of Tangshan is at the centre of a violent earthquake that kills 240, 000 people - a real event. Living in Tangshan at the time are Yuan Ni, her husband and their twins Fang Deng and Fang Da. The two adults are catching some private time in the back of the husband's work truck when the earthquake strikes, with the twins safely tucked up in bed - ok, maybe not so safely. Rushing to rescue their children, Yuan Ni's husband stops her from rushing into their collapsing apartment block in order to do it himself, but is immediately crushed and killed. The building then collapsing with both children inside, but miraculaously they both survive buried in the rubble and pinned under a concrete slab.

The hysterical Yuan Ni is given a stark choice by rescuers, any attempts to rescue either child by moving the concrete slab will mean the crushing death of the other. Yuan Ni agonises for what seems like forever, wanting both of her children brought to safety but has to quickly choose when the impatient rescuers look to move onto another survivor. Reluctantly she chooses to have her son rescued, presumably to keep the family line going with her husband dead, but doesn't realise that the young girl Fang Deng has heard her mother's words. Both children are brought out of the wreckage, Fang Deng seemingly dead, and the lifeless body of the daughter is placed alongside her father in a large row of bodies. After the grieving mother and her surviving son have left to seek help for his injured arm, pinned under the concrete slab, Fang Deng awakens from her coma-like state to find that she's all alone in an area of complete chaos. Wandering around in a daze, she is picked up by a soldier from the People's Liberation Army, who have been seconded in to help with the rescue, and taken to a camp where she is cleaned up and looked after.

The emotional shock and painful memory of her mothers seeming rejection of her drives Fang Deng to withdraw emotionally and not only hide her identity but distance herself from everyone - even from the childless PLA couple who decide to adopt the pretty but rather sullen girl. Fang Deng moves away with her new parents to a new life and grows up with plans to go to medical school but no inclination to trace her family, despite encouragement from her new father. Meanwhile back in Tangshen, Yuan Ni puts her life back together and works at finding a job and a house for herself and Fang Da but will not get involved with another man to honour her dead husband and still desperately grieves for her daughter. Fang Da meanwhile adjusts to life without an arm, amputated after the earthquake, and becomes a successful businessman who despairs at his mothers failure to move on.

The lives of these three family members develop in isolation until fate brings them all back together again after another earthquake some 30+ years later...

Asian cinema has been booming for some time now and the Chinese have really started to take their place amongst the elite with some truly awe-inspiring blockbusters that rival some of the things put out by Hollywood. Aftershock is a fantastic film that should pick up a number of fans, if they get past the rather emotional histrionics that are prevalent in films from this part of the world. In line with a number of Chinese films I've seen so far, all the set pieces are at the start and the remainder of the film is spent examining the consequences of the events or decisions made. The earthquake scenes are fantastic and really on a par with anything that Hollywood could come up with, it may not surprise some that New Zealand's Weta Workshops were involved, the effects feel pretty realistic to me even though I've obviously never had the experience of being caught in an earthquake myself, thankfully.

Again with Chinese films, everything is done on a large scale and in neat formations, so you'll see epic shots of thousands of refugees living Tangshan whilst thousands of Chinese PLA troops are coming in the opposite direction to aid in the rescue. You'll also see set pieces of PLA events where everyone is sat in neat lines and wearing spotlessly clean and ironed uniforms. I can only assume that again there is State backing for the film and therefore they can throw resources and extras at it as it doesn't look or feel as if it's CGI.

The core of the film is an examination of human nature and the impacts of the hardest decision that anyone is ever asked to make. Clearly there would be no story if Yuan Ni's desperate decision hadn't been heard by her young daughter, or hardly any as that would be a straight forward reunion story, but this examination of the guilt felt by both mother and daughter gives the film an extra dimension, especially as the daughter has misuderstood the context of the decision her mother was forced to take and in all fairness too young to probably comprehend even if it had been explained to her. Whilst it was pretty obvious where this film would eventually end up, it provides quite an emotional ride across the two hours to the denouement. Some viewers with more Western tastes may not able to appreciate the more emotional scenes as they do come across as histrionics but this is simply just an exaggeration of the emotions that these characters face and deal with.

A good sign for those who are still erring on the side of caution regarding foreign films is that Aftershock has already earned a staggering $100 million from the International box office and is one of the highest -grossing disaster films of recent years, despite the fact that the disaster is over quite quickly.

Superb film and worth a shot for those who have yet to tread into Asian cinema...