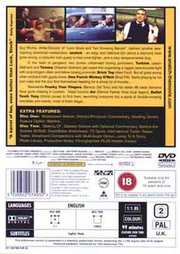 Back Cover of Snatch (2 disc set) 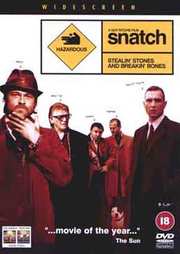 In the heart of gangland, two novice unlicensed boxing promotors, Turkish and Tommy get roped into organising a rigged bare-knuckle fight with local kingpin villian and fellow boxing promoter, Brick Top. But all goes wrong when wildcard Irish gypsy boxer, One Punch Mickey O`Neil (Brad Pitt), starts playing by his own rules and the duo find themselves heading for a whole lot of trouble...

Meanwhile Franky Four Fingers and his stolen 86 carat diamond have gone missing in London. Head honcho Avi hire local legend, Bullet Tooth Tony (Vinnie Jones) to find them, launching everyone into a spiral of double-crossing vendettas and events, most of them illegal...

"Much ado about nothing" pretty much sums my opinion about this movie. The expectations (following "Lock Stock & 2 Smoking Barrels") were so high, but the movie, alas, does not live to any one of them. It`s simply not funny, not even in a dark way. The characters are not very convincing and the plot is too familiar to begin with.
The video transfer varies from horrible to ok. The first half hour of the movie includes quite a few dark scenes where the transfer reveals a lot of scratches and dust particles. An occasional compression sign can be easily detected here and there as well. The rest of the transfer is ok, yet not amazing.
The DD 5.1 soundtrack is very good. The music`s rhythm sets the pace of most of the scenes and the editing. The usage of the surrounds is very good as well.
The menus are all animated with music.
The extras include a lot of material, starting from a commentary, some deleted scenes, interviews, a behind the scenes look and a lot more. However, none of the extras is mind blowing.
Bottom line - I think you have a better chance to appreciate this movie if you haven`t (yet) watched "Lock Stock & 2 Smoking Barrels". Otherwise, this might turn out to be a major disappointment. It was to me, at least.
posted by Zvi Josef on 23/2/2001 13:43
9 / 10

I thought this was a great film . It has great acting and plenty of laughs and has a really good soundtrack.
If your looking for a film to watch wit a bunch of mates this is it.
ps: Tyrone and Vinny af to be two of the funniest characters in cinema history !!!!!!1
posted by WINCH on 6/3/2001 18:43
6 / 10

Maybe it`s just me, but I didn`t find this anywhere near as good as Lock, Stock & TSB. I thought Brad Pitt was pretty good, but on the whole the film was decidedly average. The audio and video were good, and the extras fairly comprehensive, but that doesn`t make up for it. I`m glad I decided to rent it first, as I would have been dissapointed if I`d bought it on reputation alone. Snatch? Perhaps Gash would have been a more apt title.
posted by Chris Gould on 11/3/2001 14:54
8 / 10

Snatch, I was like "whatta hell means snatch", so I had to check it from the "english vocabulary book" and it means in finnish word "siepata, kaapata" meaning catch or something like that. I bought this dvd, because my friends saw it in the cinema and told that it was a great movie, do I agree? I don`t really know.

This is the first time that I saw Guy Ritchie`s movie and it had the minerals to be very uniq kinda, bad language, great funny English movie, but I think something was missing. The Snatch reminds about the mixture of Pulp Fiction and Fight Club, but it was just too short, so it was in the end just when I started to like it. Casting Brad Pitt into this movie was a good idea and he brought something strange minerals to this film, even it was a bit hard to understand sometimes what a hell he talking about, luckily there was English subtitles (Try to watch the scenes of Brad Pitt without subtitles.)

The video & audio quality were nice and the menus were funny, even the pig is a bit annoying. The mobile phone ringing tone was a good hidden feature. Well, ok movie, with good amount of extras and so on.

This is just amazing!2 discs of fun. Through this DVD you`ll tak a glimpse of London of the pickeys and you`ll hopefully learn the new lingo spoken by the Pitt.
It`s great fun definitely not pig`s food!!
posted by alby on 21/6/2001 05:27
9 / 10

Top dog film, of comical wannabie gangsters who just scrape throuth the film without getting there knakers fried.
Great laugh, had me and me mates talking piky at work for a few weeks - just to annoy every one else.
posted by cunnigmark on 9/7/2001 18:49
9 / 10

THE FILM: Snatch is a highly entertaining piece of British cinema from Lock, Stock... director Guy Ritchie. This very trim 99 minute outing combines three different stories which eventually mingle into one at the climax. Primarily, Snatch focuses on unlicensed boxing promoters Turkish (Jason Statham) and Tommy (Stephen Graham) who are forced to arrange a fixed fight with Irish bare knuckle champion Mickey O`Neill (Brad Pitt sporting an undecipherable accent) for Brick Top (Alan Ford) when Gorgeous George is hospitalised. The second sub-plot involves Doug the Head (Eastender Mike Reid), Cousin Avi (Dennis farina) and Bullet-Tooth Tony, (Vinny Jones) who are trying to find Franky Four Fingers (Benicio del Toro) and his 86 carat diamond. The final sub-plot, which provides most of the comedy in Snatch, centres around Sol (Lenny James), Vinny (Robbie Gee) and Tyrone (Ade) who are going to be paid £50,000 to raid the bookies and in the process steal Franky`s diamond by Boris the Blade, also known as Boris the Bullet Dodger and Boris the Sneaky f***in` Russian. By the end, it seems that the three stories have one thing in common- the 86 carat diamond. Guy Ritchie directs with finesse, making a movie more enjoyable than Lock, Stock... and many other British gangster comedies.
PICTURE QUALITY: Anamorphic 1.85:1.
The picture is sharp, yet grey and grainy as per director` s orders. Every inch of frame is a perfect representation of how Snatch should look. Seeing Snatch in it`s original widescreen aspect ratio is a real treat considering how much time and effort went into the photography on display here.
SOUND QUALITY: Dolby Digital 5.1.
As with the picture, the sound on Snatch is clear and precise at all times. Dialogue comes across as clean and audible with no distortion whatsoever. Every sound comes across with great clarity, and I was surprised at how much better it sounded than the VHS edition.
EXTRA FEATURES: Many extra features are included, making this a highly worthy 2-disc set. My favourite is the `making of snatch` documentary which is very funny in itself, and is not the typical hollywood making of... you will be used to. An informative director/producer commentary is included on disc one, along with the white rabbit-style `stealing stones` feature, which inserts various deleted scenes into the movie where appropriate. the usual filmographies and trailers are included, along with not so common song selections and cast and crew interviews. You will also find some extremely entertaining easter eggs, such as the one liners motage, violence and swearing featurette and Doug the Heads mobile phone ring tone.
COMEDY AT ITS BEST: Here are some of the best lines of dialogue uttered by Irish Mickey...enjoy!
"Save yer breath for coolin yi porridge"
"Need ti ave a s***e!"
"Why would I want a f***in` caravan with no f***in` wheels?"
"f*** me, look at the size of him"- observing Gorgeous George.
"Yer not goin` anywhere ya tick (thick) lump!"
posted by Richard Knowles on 31/7/2001 02:15
9 / 10

As a big fan of London gangster movies Snatch was a sure fire hit before I had even watched it but it outpassed all my expectations. I had some doubts with brad Pitt putting on an accent what with Americans being terrible at doing accents. But I found him hilarious.There were no poor performances in this movie and Vinnie Jones once again pulls off a brilliant performance.
There are some quality lines in this film with the best of them being:

Turkish:Ever look the wrong way and hey presto there`s a car is nearly on you.So what do you do? something very silly you freeze and your life doesnt flash before you cos you`re too f***ing scared to think you just freeze and pull a stupid face.

Brick Top:Do you know these tits Harold?
Harold:I know a lot of tits guv`nor but I don`t know any quite as f***ing stupid as these two.

A great film. I loved Lock Stock but didn't expect much from this although the trailer was brilliant. The characters are more diverse and enjoyable than Lock Stock and the plot was more complex. Guy Ritchie experimented a bit more with his directing and it pays off handsomely as you get a well acted, well scripted, well edited film with a varied soundtrack. The time simply flies by, it is great entertainment. Importantly, it gets better with repeated viewings.

Avi: Should I call you Bullet? Tooth?
Bullet Tooth Tony: You can call me Susan if it makes you happy.

Sol: You`re not from this planet are you Vincent? Who is gonna mug two black guys, armed, sitting in a car that`s worth less than....your shirt!?!?

Turkish: [making tea] Would you like sugar?
Brick Top: No thank you, Turkish; I`m sweet enough.

From the director of Lock, Stock and two smoking barrels, you get a UK version of Reservoir Dogs and Pulp Fiction mixed together. Snatch consists of 3 different stories, 2 boxing promoters and a gypsy, a cockney and a yank and 3 inept thiefs. As the movie progress, the 3 stories become one and there is a funny climax. OK, it`s no Pulp Fiction climax á la Sergio Leone`s Mexican shootout but it`s still funny.

Video- In 1.85:1 anamorphic widescreen. The images are sharp and well defined. However, there are some signs of dirt that appear here and then but it gives character to the film(and it`s typical of a British film=grainy video quality).

Sound- In DD 5.1, the soundtrack is fairly lively from Diamond - Klint to Don`t you just know it - Huey piano Smith & the clowns. (Also available is the Superbit version with DTS, that has a bit more oomph in sound)

Extras- All of the extras should be in the same disc as putting them into another disc is a waste of time and money. The only killer extras are the commentary, the making of featurette and deleted scenes.

The commentary is worth listening to. Contributions from Ritchie. There is also a follow the white rabbit feature which allows you to view the deleted scenes while watching the main feature.

On the 2nd disc, we have a short making of featurette. This is presented in fullframe and in stereo. It is self explanatory and is worth a look.

Next, there are 15 minutes of deleted scenes all played together, all are acceptable quality. The odd thing I noticed is why are the deleted scenes on the 2nd when you can view them on the 1st with the "White rabbit" feature on.

There are 3 storyboards with multi angle feature and a behind the scenes thing which only lasts around 6 mins. The rest is all filler.

Note: there are 5 easter eggs on both discs. 1 on the 1st and 4 on the second; they are all very easy to find.

Overall- If you like Guy Ritchie`s Lock Stock and 2 Smoking Barrels, then you`ll love this. Quickfire humour and memorable dialogue gives the overall score 8/10. If only all the extras are put into one disc.
posted by alias-rf2 on 11/6/2004 19:31