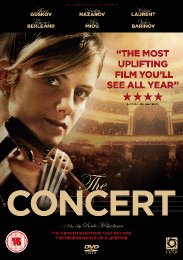 Blu-ray
This Is Spinal Tap: Up To 11 Edition
Related Articles

The problem with cinema output being dominated by multiplex cinema chains is that it has brought about a lack of variety with just about every chain, whether it is Odeon, Showcase or Cineworld showing just about exactly the same films at exactly the same time. There isn't any room for small independent films because they aren't as profitable as the bigger, blockbusters that bring guaranteed income to the cinema regardless of quality. There are numerous examples of films that just didn't make it to the Cineworld near me so I had to catch up on the films at the local arthouse cinema or on DVD/BD.

One of these was The Concert or, to give it its proper title, Le Concert which did have several screenings at the Arc cinema in Stockton but none at a time or day that I could make - the rest of my family went and thoroughly enjoyed the film so it was one that I was eagerly anticipating for its DVD release. Although I had heard good things about the film, I really didn't know anything about it other than the music featured so prominently that my dad bought a Tchaikovsky CD because he liked the classical music and the film so much. 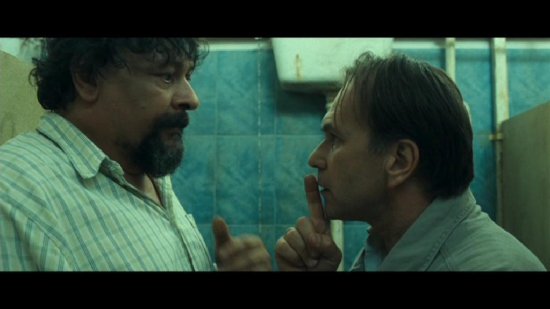 Set in present-day Russia, The Concert follows Andrei Simoniovich Fillipov, a conductor who lost his job and hit the bottle when he had a run in with Brezhnev 30 years previously and is now working as a cleaner in the same building that used to play to huge audiences. Put upon by his boss and generally humiliated, Andrei is ordered to clean his boss's office and, whilst he is polishing the underside of the desk, a fax comes in from France asking that the Bolshoi take the place of the Los Angeles Philharmonic Orchestra who have pulled out and play the prestigious Le Théâtre du Châtelet in Paris.

Not wanting to let an opportunity go to waste, Andrei steals the fax, turns on the computer and deletes the e-mail sent by the head of the Châtelet so that, when his boss returns the next day, he will know nothing about the correspondence. Andrei has spent 30 years obsessing over Tchaikovsky's Violin Concerto and sees that this is his chance to give Brezhnev the metaphorical finger and seek catharsis by bringing the orchestra back together for a one-off gig in Paris. Needing a manager to sort out all the logistics of such a trip, Andrei contacts the man who was instrumental in his downfall, the former head of the Bolshoi and current head of the Communist party, but he is the right man for the job as he can speak French, has contacts in Paris and has organised such concerts in the past. 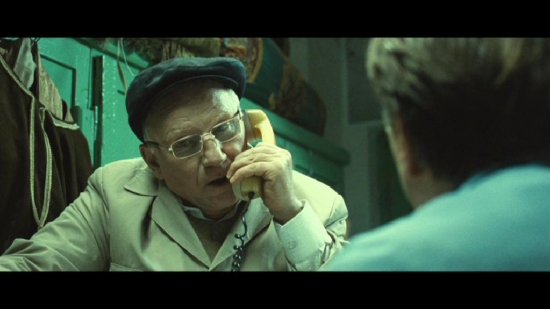 As times have changed and the members of the orchestra moved on, there is a great deal of organising to be done so Andrei and his best friend, who now drives an ambulance, fly around Moscow to try and talk all of the formerly respected musicians into agreeing to perform in Paris for one night only.

Of course, nothing is as it seems and everyone has a hidden agenda, whether it be the French organisers who are trying to save money by hiring the Bolshoi at a knockdown price, not letting on that their American counterparts are much more expensive. This isn't helped by the 'expert' manager (who really wants to go to Paris because there is a huge Communist rally) still working in prices from 1980 and undercharging them or Andrei who is desperate to secure the services of the violin soloist Anne-Marie Jacquet despite her unfamiliarity with Tchaikovsky. 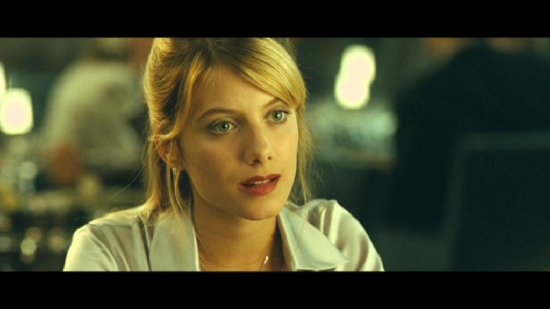 This is one of those movies where you know that everything will eventually fall into place even though everything will go wrong on the way. Their best violinist, a gypsy, even has to use his contacts to get fake passports and visas for the whole orchestra in a day when it should take weeks and they're forced to gain sponsorship from a gas magnate (and aspiring cellist) in order to pay for the flight to France.

The Concert is an extremely well written film that moves along at a tremendous pace with wonderfully rounded characters, terrific situations and manages to mix comedy and pathos beautifully so you feel for each and every person which makes the ending all the more emotional and heart wrenching. The direction, by co-writer and director Radu Mihaileanu ensures that the film is as pacey and involving as possible so you really become deeply involved in Andrei's situation which has helped by the splendid acting whereby most of the actors are required to speak two languages (Russian and bad French) and play instruments to a standard that makes them believable as Bolshoi standard musicians when you see them on screen.

This isn't the sort of film that I would typically sit down and watch on a dark evening but I did and was instantly drawn in, loving just about every minute. The Concert is a tremendous film with a real dramatic centre that keeps the comedy grounded so that, no matter how funny the situations or lines are, you really want to know what happens to the orchestra, Andrei and those who have seen him suffer for three decades. I thought it was a remarkable film and one I would quite happily watch again and it really helps that the music is so beautifully played -I had never listened to Tchaikovsky but, like my dad, wouldn't hesitate to put on a CD of his music now.

Extra Features
The interview with writer/director Radu Mihaileanu (13:49) is reasonably interesting going through why he developed the project, casting and Andrei's personality and motivation. For a Romanian living in France and speaking with a thick French accent, he is quite easy to understand and speaks English very well, practically fluently.

The only other special feature is the theatrical trailer. 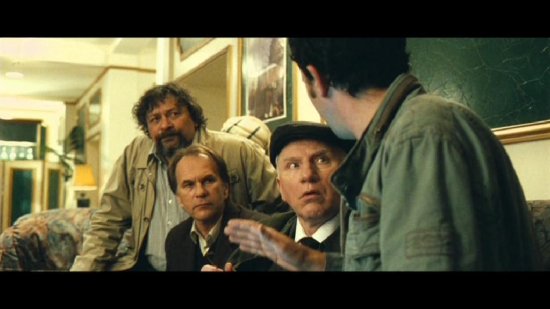 The Picture
It was clear from the outset that the contrast levels are not going to be as solid or consistent as I would expect from a recent film as some of them are very good with the blacks being very inky and others being slightly lighter with a grey or even green hue to them. Colours are generally very good with excellent skin tones and vibrant primary colours which contrast against the muted wardrobe and browns of the wood instruments. The picture is also a little soft at times and doesn't quite have the definition of detail levels that you would get with a high definition release on Blu-ray or at the cinema. Despite this, I didn't find that the picture quality detracted from the film in any way as you spend most of your time being so drawn in that you really don't notice the quality (or otherwise) of the visuals.

The Concert is extremely well shot with splendid cinematography by Laurent Dailland and remarkable editing by Ludo Troch. The more energetic scene have a real tempo to them and the final section of the performance itself is done with such verve that you can't help but be swept along by the music and emotion of the whole piece. 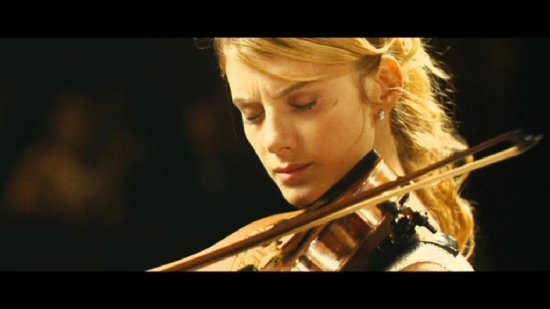 The Sound
You have the choice of Dolby Digital 5.1 surround or 2.0 stereo and the surround mix clearly has the edge when it comes to the musical and action oriented scenes when the front and rear surrounds really come into play making the film as immersive as possible. There's nothing intrinsically wrong with the stereo track which does a fine job with the dialogue (as does the 5.1 option) but it does seem to be a little lacking when you need something to make you feel as if you are in the audience watching an orchestra play Tchaikovsky and the 5.1 track does this and extremely well.

The dialogue is a mixture of Russian and French and it is very well subtitled with both languages having the same subtitles but you can tell the difference between Russian and French and it does seem as if they are translated faithfully (I could tell this far more with the French is my Russian is virtually non-existent). The subtitles are clear, easy to read and error free say could follow proceedings quite easily. 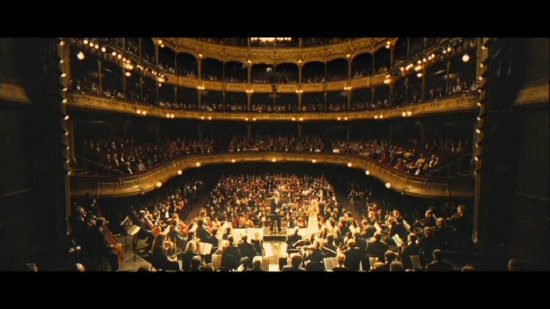 Final Thoughts
The Concert is a remarkable, genuine feel good film along the lines of Slumdog Millionaire where the emotional payoff at the end is so great because of everything you've been through to get to that point.

Although the picture isn't quite as good as it should be and there perhaps could be more bonus features, this is a DVD containing a film that is extremely good and comes highly recommended.