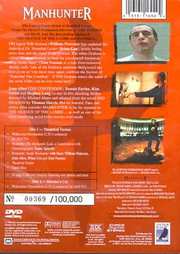 DVD
Last of the Mohicans (DTS) (US)

DVD
Contender, The (US)

DVD
Insider, The (US)

DVD
Silence of The Lambs, The: Special Edition (2 Discs) (UK) 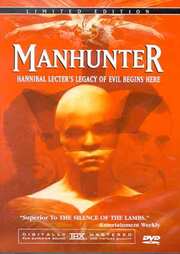 Synopsis:
FBI agent Will Graham (William Petersen) has captured the diabolical Dr. Hannibal Lecter (Brian Cox), nearly losing more than just his mind in the process. But when Graham is called out of retirement to hunt the psychopath known as "The Tooth Fairy" (Tom Noonan in a role Entertainment Weekly calls "one of the freakiest madmen Hollywood has ever given us") he must once again confront the horrors of "Hannibal The Cannibal". If Will Graham enters the mind of the serial killer, can he ever come back?

Joan Allen (The Contender), Dennis Farina, Kim Greist and Stephen Lang co-star in this shocking thriller directed by Michael Mann and adapted from the novel Red Dragon by Thomas Harris. But be warned: Fans and critics alike consider Manhunter to be far superior to The Silence Of The Lambs, as well as one of the most unnerving serial killer movies ever made.

Just read the review of the Manhunter disc, with the directors cut. Thought you might be interested in the following. In 1995, there was a Michael Mann weekend at the
National Theatre in London. As part of that weekend, a directors cut of Manhunter was shown. It was stated that this was the directors own copy, and was the only one in existence. This was also a video copy. I believe an apology was also made for the poor quality. It looks a though this is where the current directors cut has been sourced from. I am sure the version I saw in `95 contained the famous `Red Dragon` body painting scene. But it was a while ago now, so I could be wrong. Seems strange to splash this image all over the package and the inserts of the DVD, but not actually use it.
Especially when the Director of Photography states on the disc that Michael Mann orginally decided to cut it because it `trivialises Dollarhyde`s struggle`. Still, whatever sells, eh?
posted by john morley on 7/2/2001 13:08
8 / 10

If I had to stick my neck out I would say that I prefer this to The Silence of the Lambs by virtue of the fact that Brian Cox is the better Lector, and Tom Noonan`s `Tooth Fairy` is more chilling than the character of Buffalo Bill in Silence. Admittedly it`s all a bit `80s`, but with fine performances all-round, Manhunter is definitely one to look out for.

I don`t quite understand the other reviewer`s reasoning behind marking the video/audio down because of the failings of the director`s cut. It`s an extra, and as such should have no bearing on the scores. That said, it is pretty shocking.

The theatrical cut features a great transfer, which perfectly showcases Dante Spinotti`s wonderful cinematrography. Some instances of print damage detract from the presentation somewhat, but it`s nothing too major. All in all this is very pleasing to the eye.

The 5.1 mix is nicely balanced, featuring clear dialogue, some good surround effects and a pleasant soundtrack. Manhunter`s soundtrack takes a bit of getting used to (it`s very `Miami Vice`), but it` in keeping with the film and it does grow on you.

The extras are fine for what they are, but there`s not really enough here to justify the price. The 24-page booklet that accompanies the package makes for interesting reading, while the featurettes provide some welcome insight into the production. The director`s cut is a welcome edition, but the quality of the audio and video is very poor. This was unavoidable, as the only copy in existence was apparently the director`s own videotape workprint (or so I`m led to believe).

Manhunter is an excellent psychological thriller, with enough twists and turns to keep most people happy. While I prefer it to Lambs, it is a close call, and I can understand why I`m in the minority. Still, it`s excellent entertainment that is certain to tax your brain a lot more than the latest Wayans movie, and that can only be a good thing.
posted by Chris Gould on 20/7/2002 04:49
8 / 10

I agree with those who say Manhunter is a better film than Silence of the Lambs, not that SOTL is a bad movie (Far from it) just that Manhunter is very stylish and very very well acted.
But I don't agree with those who say the 80's music lets it down because in my opinion it doesn't, the book was wrote in the 80's and the story is set in the 80's, so what's the problem?
I think Cox plays a far better Lektor (Yes in Manhunter they Purposely misspelled it), his charm and evil are very eerie and are indistinguishable, so you don't know weather he being friendly or screwing with your mind.

The story is similar to SOTL, as the FBI recruits retired agent Will Graham to work the "Tooth Fairy" case, the Tooth Fairy is a serial killer who has murdered 2 entire families in two different states, both on full moons.
The FBI have recruited Will for his unusual techniques, he has the ability to think like the killer does, in order to predict the next move of the killer.

Hmm what do we have here, this package consists of two disks, first disk contains the Theatrical Cut of the movie, and disk two carries the Directors Cut. I will describe both separately.

Presented in 2:35:1 Anamorphic Widescreen, considering the age of the film (16 Years) the picture is high quality, thanks to those nice guys and girls at THX. The transfer is virtually free from stretches and grit, and the colours are nicely set.

Presented in 2:35:1 Anamorphic Widescreen, hmmm… this is THE WORST transfer I have seen EVER!
I've never seen a VHS in this bad of shape.
The colours are blurred, it looks like someone has smeared Vaseline on the print and the detail are virtually impossible to see.
Apparently this cut was taken from Mann's personal VHS tape, which is said to be the only one in existence, why Anchor Bay bother releasing it without some sort of restoration?

We're given a newly re-mixed 5.1 Dolby Digital track, which like with SOTL isn't essential makes a worth appearance.
The 80's soundtrack is excellent and crystal clear, and the dialogue is easily understood.

Here we're giving a DD 2.0 mix, which is almost as bad as the picture, although it's watchable, the music and dialogue sounds fussy and is hard to understand.

This is where the package is let down, not by anchor bay but by Mann himself as he doesn't like speaking about his movies, so there's no Commentary, No interviews with him.
We're given two Featurettes which are informative and provide some insight into the film but that's it.

I do love this film very much, the story is gripping and exciting, but the disk fails to provide the same thrills as the film, if you're a die hard fan you will no doubt own this but to others I recommend Anchor Bay's other release of this which only contains the Theatrical Cut.
posted by Kain^ on 21/10/2002 07:03