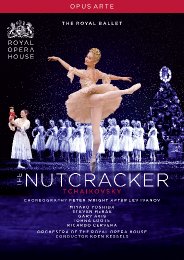 Synopsis:
This all-time ballet favourite, in which young Clara is swept into a fantasy adventure when one of her Christmas presents comes to life, is at its most enchanting in Peter Wright's glorious production - as fresh as ever in its 25th year. Tchaikovsky's ravishing score, period designs by Julia Trevelyan Oman (including an ingenious magical Christmas tree), an exquisite Sugar Plum Fairy (Miyako Yoshida) and chivalrous Prince (Steven McRae), the mysterious Drosselmeyer (Gary Avis) and vibrant dancing by The Royal Ballet make for a captivating performance. Filmed in High Definition and recorded in true surround sound.

The Royal Ballet
The Orchestra of the Royal Opera House