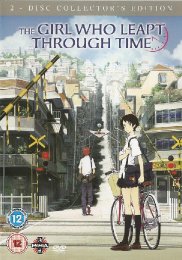 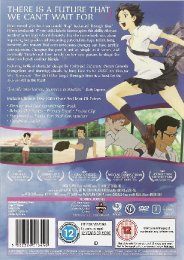 DVD
Time Traveller: The Girl Who Leapt Through Time

Review for The Girl Who Leapt Through Time: 2-Disc Collector's Edition

I do watch DVDs again! You'd think that with all the review discs and all my own purchases, that finding time to re-watch a film or a television show would be impossible. But that is the whole point of DVDs, re-watchability. I have to admit though that I do have a long time between viewings now. It's been eighteen months since I last looked at The Girl Who Leapt Through Time, and I had totally forgotten that Manga had sent me a screener disc to review. This winter just past, the 2-disc version of the film got a general release (it had just been an HMV exclusive before), so rather than just put the screener in again, I eagerly ordered the retail version with all the extra goodies. Now I get to check out the audiovisual qualities, and all those juicy extra features. The thing is that in the interim, I got a rare chance to see this film in the cinema, so this disc has a lot to live up to. 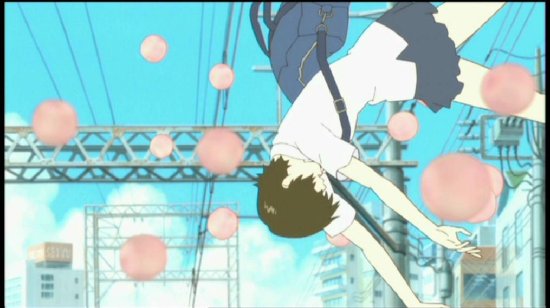 The Girl Who Leapt Through Time was easily the best anime feature film release of 2008 in the UK, it garnered the Japanese Academy's first ever Best Animation Award one year prior. It's a film with a past, based on a 1965 novel by Yasutaka Tsutsui, and is in some ways a sequel to that novel and the two previous live action films that have been adapted from it. If you're going to try and categorise it, it would fall into the sci-fi romantic comedy bracket, but it would be far easier to just buy a copy and decide for yourself. 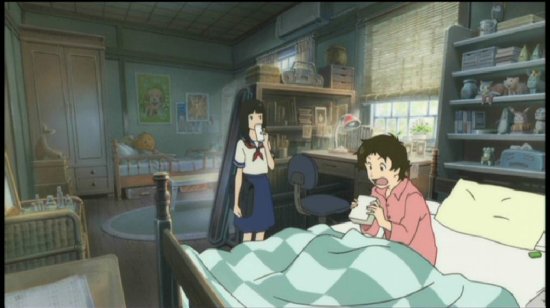 Makoto Konno is your typical tomboy, an occasionally klutzy and not too smart young girl who's in her last year of high school. But it's summer, and she prefers to spend her time with best friends Kousuke and Chiaki playing catch and swinging at pitches instead of truly thinking about her future. That all changes one day, when riding home from school, the brakes fail on her bike and she's killed in an accident. Except that she isn't. She lands in a heap, back up the hill, a few seconds before she would have been killed. Makoto's discovered her inner power, she can leap back into time, and pretty soon she's having fun, leaping back to snaffle the pudding that her kid sister stole that morning, re-sitting her maths test to get a perfect score, arranging not to look like a ditz in home economics, or spending a whole day singing karaoke. It looks as if the perfect summer will last forever, but things get teen angst complicated when someone confesses his love to her, and she soon learns that no matter how much you travel through time, certain things are inevitable. 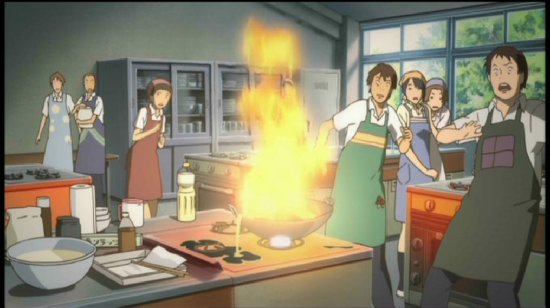 The Girl Who Leapt Through Time gets a 1.85:1 anamorphic transfer. It's an NTSC-PAL standards conversion, which is a tad disappointing, but it's one of the better such that I have seen. You will only really notice a slight overall softness, and some interlacing if you hit pause and frame advance your way through the disc. Just watching the film makes these issues fade away. The image quality is solid, with a clear and colourful transfer. The animation is exquisite, offering excellent detail, and vivid, if slightly simplistic character designs. It's the way that the characters are animated that gives them a genuine feeling of humanity, not necessarily the number of freckles on a face. There is some slight mosquito noise around frenetic motion, but otherwise this is a top-notch anime transfer. 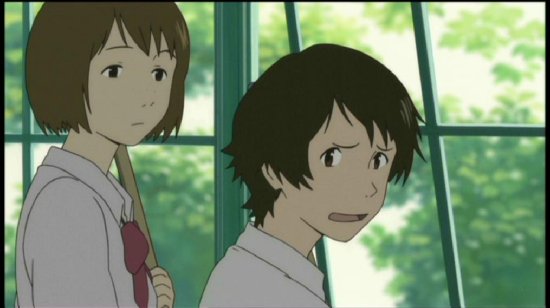 You have the choice between DD 5.1 and DD 2.0 in both English and Japanese, with a sole translated subtitles track. The dialogue is clear throughout, and the dynamic sound design comes through well with the surround presentation. The music also adds to a very amenable viewing experience, although the surround does show up an error in the subtitling. I think that the subtitlers worked from the central dialogue channel to create the captions. There are scenes in the film where voices come from the rear and around the soundstage. When there isn't any dialogue in the central channel, there aren't any subtitles, which means in one important scene, subtitles are missing. The gist is still there though, and you can also switch to the English dub. It was also a problem in the theatrical print that I saw, and it's a shame it couldn't be rectified for the DVD release.

The discs come with animated menus, presented in an Amaray case with a hinged central panel for the second disc. The artcards were an HMV exclusive and aren't in the general release.

You'll also find the audio commentary here with director Mamoru Hosoda, and voice actors Riisa Naka (Makoto), Takuya Ishida (Chiaki), and Mitsutaka Hakura (Kousuke). It's a nice, light, informative and anecdotal commentary, one that by the nature of its participants concentrates more on the ADR process and the actor's experiences in making the film. It's interesting to hear that for the actors, working on an animated movie means a 'shoot' of just four days. 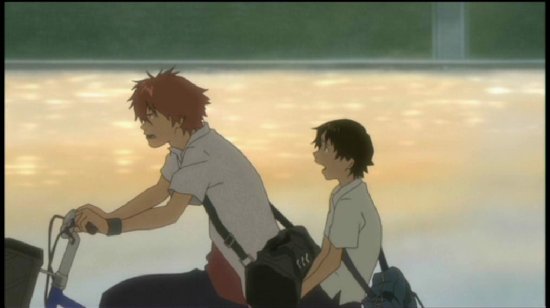 On the second disc, you can watch the film all over again, this time as a Feature With Storyboards and Production Staff Commentary. The film plays in one large window, the storyboards are in a small window to the bottom right, and speaking on the film's production are director Hosoda, animation director Aoyama, and assistant director Ito. This is the more technical of the two commentaries, concentrating as it does on the film's production, but it's still kept light and amiable for the duration.

Behind The Scenes is a 34-minute interview between Mamoru Hosoda and writer Tsutomu Furukawa. It's a very useful examination of how the director works with reference to the appropriate scenes from the film.

The Premiere Event lasts 14 minutes, and allows the director, the voice cast and the theme song recording artist to introduce the film to a theatre full of anticipating fans.

You'll also find the preview and the theatrical trailer to The Girl Who Leapt Through Time on this disc. 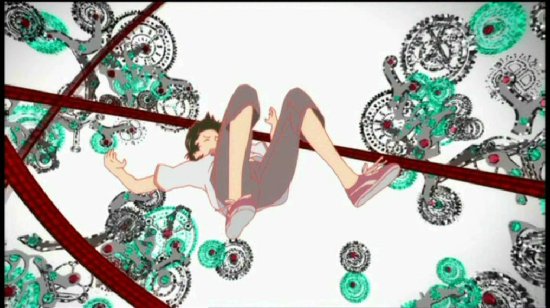 I'm wavering between a verbose, burst of loquacity that offers a page or two of gushing appreciation, and an inarticulate squeal of joy that accurately represents how enthused I am about this film, but will make no sense to anyone reading it. I'll stick to the middle road and simply say this is still the best anime film I've seen since that screener disc fell on my doormat two years ago. The Girl Who Leapt Through Time is a perfect peach of a film that tells a charming story, with wonderful characters and with a magnificent imaginative scope. In some ways it's the most accessible sort of sci-fi, where the time travel is a device to tell a very human, heart-warming, comic and emotional story, with the emphasis on character growth. 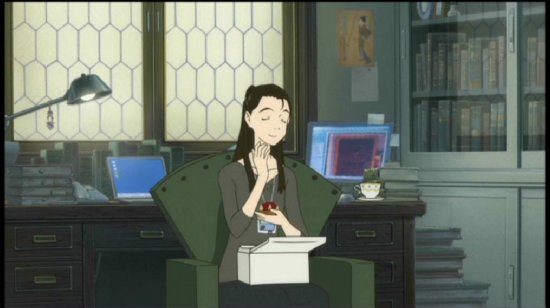 I'm an inveterate proponent of the original language in anime, and this time I did get to enjoy the Japanese track and found it to be of top quality. Still, thinking back on that screener disc, I have to maintain that TGWLTT's English dub is spectacular. It's a sign of how far dubs have come since the bad old days of Manga Video. The English voice actors are perfectly cast for their roles, and they capture the emotional strength of the characters, the verisimilitude that the story requires without flaw. They carry the emotional weight of the film and watching it you simply forget that it's animated. 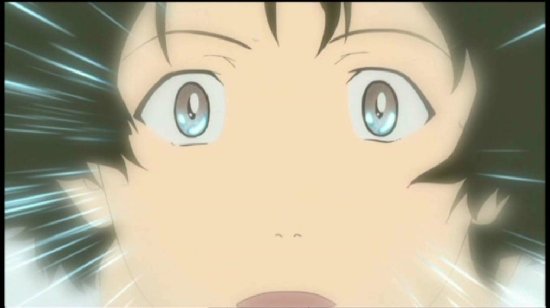 Which is something of a shame, as this has to be one of the best animations that I have seen recently. It's courtesy of Madhouse Studios of course, and they bring an attention to detail and realism to the anime that is simply astounding. The character designs are simple but memorable, and the character animation is detailed and expressive. Placed into the detailed backgrounds, the atmospheric visuals and singular vision of a small town at the height of summer, watching the film is a wholly relaxing experience. CG is used sparingly, or at least it only really becomes obvious during the time leap sequences, when an otherworldliness is appropriate. Otherwise the anime has a wholly traditional 2D feel that suits the story brilliantly, while being just as immersive and 'real' as any 3D animation. 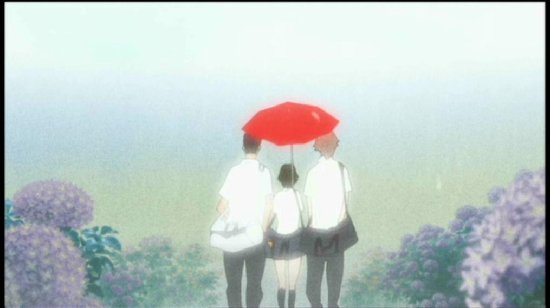 As for the story… well I'm not going to tell you more than I already have. It's a film that deserves to be discovered for yourself. But I will tell you that it does what all the best films do; it runs you through the gamut of emotions in its brief run time. You'll be laughing out loud, cringing in embarrassment, your heart will be in your throat, it will have you in tears, and you'll be uplifted with joy. This is one enchanting family film that ought to be on every DVD shelf. 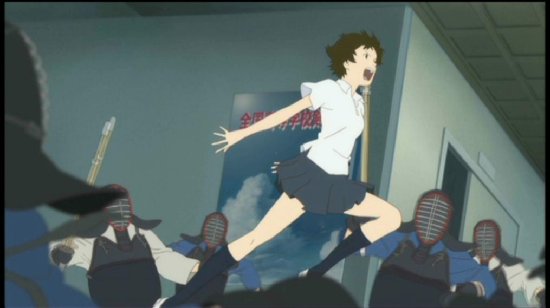 What is it with Mamoru Hosoda's films in the UK? It took almost a year for this two-disc edition to get a general release, and the Blu-ray of The Girl Who Leapt Through Time that was due this April has been pushed back again and again. It's now due at the end of 2010. His follow up film, Summer Wars, was quite appropriately scheduled for September, but delays in dubbing means that it will now be released in February 2011 at the earliest. Incidentally, Summer Wars is another film that I got to see in the cinema, and Hosoda's follow up feature is of similar high quality. It's another film that can't come to the UK soon enough. 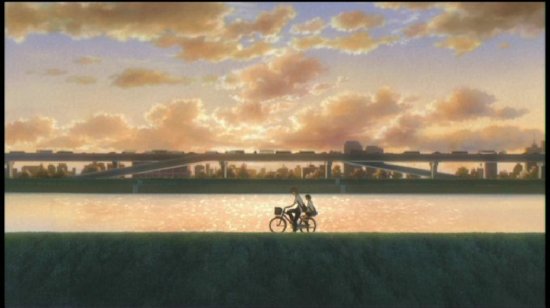 Finally getting to see the retail release of The Girl Who Leapt Through Time is a treat, and yes, it does stand up well when compared to the theatrical presentation. It's the third time that I have seen the film, and not only is it just as good as before, I feel that it has improved with age, certainly I realise just how detailed and lifelike the animation is, how nifty the sound design is, but most of all, how the story is rich and emotionally resonant enough to be enhanced by repeated viewings. If you haven't seen this film yet, then this feature laden two-disc edition is definitely the way to go. It will tide you over until winter, when the Blu-ray release finally makes it to the UK.