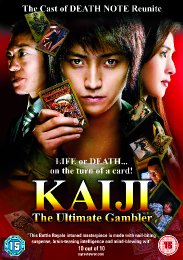 With some films, you can wax lyrical about the narrative structure and the character arc that each person goes through as, due to modern trailers taking you through at least 50% of the film, there isn't an awful lot of surprise when you actually see the film. In the case of Kaiji: The Ultimate Gambler, there are several major plot twists and three distinct acts that it is a case of the less said, the better and so I won't go beyond the first act so as not to spoil the film for anyone who hasn't seen it.

This film is based on Nobuyuki Fukumoto's immensely popular manga series and the 26 part anime that it spawned and reunites most of the cast from the Death Note film, including Tatsuya Fujiwara, who most will recognise as the lead actor from Battle Royale.

The film begins with a brief scene in which an elderly businessman who looks a little like Pat Morita's Mr. Miyagi, asks his employees how they could get the most power and eventually tells them that his plans involve building a huge underground complex -- a kingdom, as every King needs a kingdom. The film cuts straight from there to Kaiji. 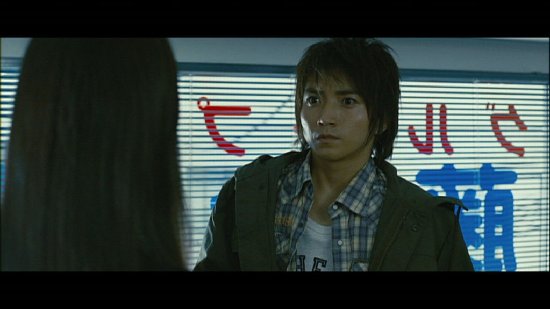 We first meet Kaiji, a convenience store employee, through CCTV as we see him flicking through a manga, lazily sweeping the floor, serving someone and almost falling asleep on his stool. The first time you find anything out about him is when he is eating in a diner after venting his frustration on the wealthy upper class by kicking the tires and then a door of some rather expensive German cars. He is then chased by the occupants and one of them, and extremely smart and ice cold woman, presents him with a piece of paper: a loan contract belonging to a friend of his who disappeared with the money, leaving Kaiji, as the guarantor, responsible for a vast amount of money which he couldn't possibly hope to pay off.

The mysterious woman gives him an alternative to spending at least 10 years working his fingers to the bone to pay off his friend's debt: board a ship, the Espoir (French for 'Hope', for a night of gambling in which he can pay off all of his debts and possibly make a fortune. Opting for the latter option, Kaiji takes his invitation and approaches the rather ominous looking vessel and, once inside, finds an extremely plush looking room filled with men who are losers, just like him. 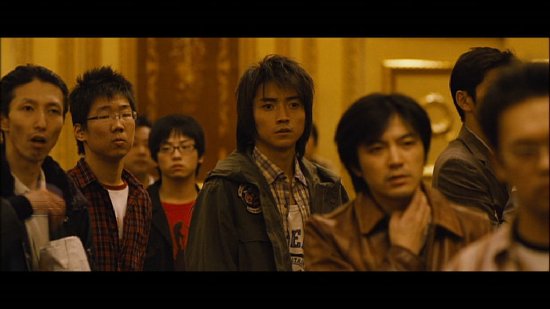 Once everyone is present and correct, a man stands at the front and explains that what they are going to do is play a very simple card game with each participant given 10 cards. They will also be loaned three gold stars, each representing a vast sum of money with an extortionate interest rates. The card game is based on rock, paper, scissors and, if you win, you take one of your opponents gold stars but, if there's a draw, you both put your cards down the In the middle of one of the tables. If, when the 30 minutes are up, you have at least three stars and no cards, you are a winner and are free to go with all the money, many millions of yen, you have won. If you haven't, however, and if, at any point, you lose all your stars, you will be taken through a door to a mysterious future.

Kaiji watches as the horde of men, desperate for a future free of debt, rush around to try and find as many games and playing partners as possible and, as the clock ticks , he is approached by, Funai, a man with a plan who has managed to stay as calm as him. This man proposes that they rig the game so that each knows what card the other will play so they will keep their stars but quickly lose all of their cards as each play will end up as a draw.

What happens from here is the beginning of a long and thrilling journey for Kaiji, who will need all of his resourcefulness and penchant for gambling. 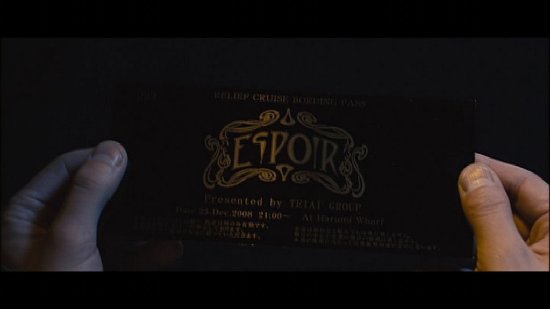 I haven't read the manga, seen the anime series or seen the Death Note film (which is now on my rental list), so I was able to watch this without any preconceptions about how good an adaptation this is, whether it stays true to Mokushiroku's source material and whether it does the anime justice. In other words, I went into this with eyes wide open.

The one thing that struck me more than anything else was the sheer amount of voiceover employed as just about every other Japanese film I've seen tents to rely on visual rather than narrative storytelling, keeping words to a minimum and relying on camerawork, acting and sets to tell the story. Maybe it's because this is based on a manga in which the main character, Kaiji, goes through many scenarios in his head if speaking and screenwriter Mika Omon and director Tôya Satô wanted to stay true to the source material. In any case, this is an extremely wordy film, more so than I ever expected from something from Japan. In some cases the level of exposition and vocalisation of thoughts reaches extraordinary levels so you end up with Kaiji (or another character) pointing out things that you can see yourself.

Kaiji: The Ultimate Gambler is extremely well worked drama with some thrilling moments, some born of utter desperation with the characters having absolutely nothing to lose and others because they just want to get one up on another person. It is extremely well acted or, in many cases, overacted, especially by Tatsuya Fujiwara who is an exhilarating screen presence, conveying the desperation and high emotions of the situation extremely well. Tôya Satô does a terrific job with the direction and all of the weird and wonderful locations from deep underground to right on the top of a couple of skyscrapers.

Extra Features
The 44 minute Making Of featurette is well worth your time and attention as it goes through the origins of the manga in 1996 to the beginning of the filming process a decade later, going through various scenes, interviews with the actors and all of the visual effects and is your typical Japanese EPK piece which, I guess, was made for TV as you can tell where the commercial breaks were -- it probably would have been shown in a one hour slot on television. As with other pieces like this, the dialogue is subtitled in Japanese and English, occasionally overlapping which makes the English ones more difficult to read. You really need to concentrate as the narration is subtitled and Japanese captions appear on screen which are translated into English so you have two sets of subtitles on screen.

There is also the original Japanese trailer, a selection of trailers for other 4Digital Asia releases and a weblink. 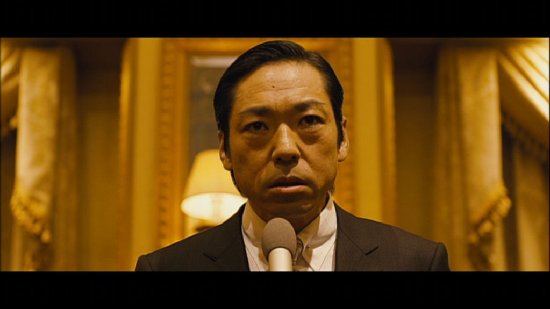 The Picture
The anamorphic picture is probably an NTSC-PAL conversion but it bears little of the traditional compression artefacts, banding or aliasing that sometimes comes with such transfers.

By and large, the colours are either bright and vibrant or very dark and grim, depending on the location and tone. The contrast levels are similarly impressive, maintaining a high level of clarity even in the darkest situations and low light scenes. There is probably a great deal of CGI (especially when it comes to the Brave Man Road scene) that goes unnoticed as you pretty much know that it's there but really don't notice that it was shot against green screen. 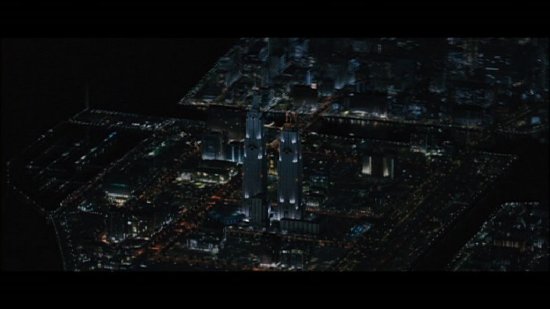 The Sound
The only option is a Dolby Digital 2.0 Japanese track with excellent English subtitles and this does a tremendous job with the dialogue, score and surrounds as, if your amplifier can do Pro Logic II, you have the simulated surround with people chattering, machinery moving and wind blowing around. If not, then the majority of the film is front loaded and dialogue dominated with a great deal of the dialogue taking place inside Kaiji's head. 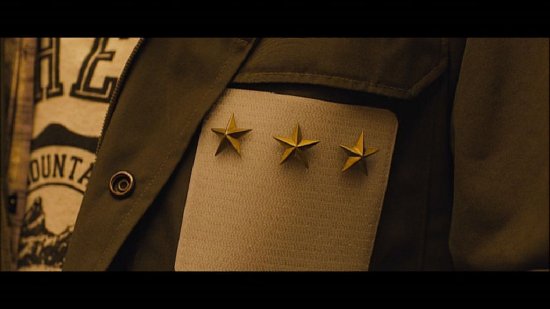 Final Thoughts
Kaiji: The Ultimate Gambler should really be called Kaiji: A Life or Death Game as that would be a more accurate and literal translation from the Japanese title while still maintaining the same 'punch'. However, that is only a minor niggle as the film itself is an extremely well orchestrated drama/thriller with a terrific central performance by Tatsuya Fujiwara. It was a massive hit in Japan, so much so that a sequel is on the way. I can't comment on how it stands up as an adaptation of the original manga or the anime series (there is one major change in that the character of Endo changes from a man in the manga and anime to a woman in the film) but, as a film judged on its own merits, it is extremely watchable and comes with a pretty good package.