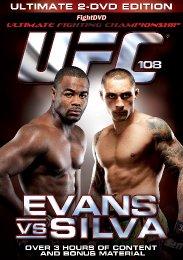 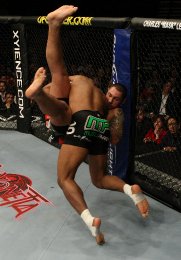 The UFC was once again left to pick up the pieces of another disrupted fight card. However this time it wasn't an injury or illness (a la Brock Lesnar) that interfered with match-making, it was the movie ambitions of Quinton 'Rampage' Jackson that meant the UFC had to reshuffle another card.

Despite having an agreement to fight bitter Ultimate Fighter coaching rival Rashad Evans, Jackson wanted to appear as B.A. Baracus in the A-Team movie. Dana White, understandably, did not share Jackson's ambitions.

What they came up with, instead of Jackson facing off against fellow TUF coach Evans, was to match the aforementioned Evans with the man who knocked out Keith Jardine, Evans's good friend and training partner, the dangerous Brazilian Thiago Silva.

It was a fight that, in normal circumstances, would make for a great co-main event and one that fans would love to see. But after the disappointment of seeing fan favourite Jackson pull out of the card it didn't appear so great.

Add that to the disappointment of seeing Brock Lesnar-Shane Carwin and Anderson Silva-Vitor Belfort scrapped and the withdrawal of Tyson Griffin, Sean Sherk, Gabriel Gonzaga, Carlos Condit, Rory Markham and Steve Cantwell and you have a what seemed to be a pretty underwhelming card.

However, as the saying goes, 'the show must go on,' and go on it did. And, despite the setbacks, the New Year's show still managed to provide plenty of fireworks.

Video is presented in 4:3 fullscreen PAL and as always for a UFC event is exceptionally clear and well shot.

Sound is provided by Dolby Digital 2.0 and no complaints can be made. We can here action within the Octagon, get great commentary and event have the corner action between rounds translated when a foreign speaker is fighting.

Warning: If you're thinking of buying a UFC DVD for the exclusive bonus footage and hours upon hours of bonus material.......don't. There is hardly anything here which, although it is now expected, is a real shame. This DVD comes with less than usual, providing us with just the weigh-in show and the behind-the-scenes options.

It is a tiresome formula, the weigh-in show is nothing special, and the behind-the-scenes vignette is good viewing, but not exactly worth the price paid. The extras could be the sweetener with cards like this, but by repeating the same tired formula again and again, the UFC is doing itself no favours.

Despite the criticism this is a very solid night of fights underlined by the fact that there were just three bouts that went to a decision on the entire card.

The main event, between Silva and Evans, was admittedly a little underwhelming, unless, that is, you are a huge admirer of dominant wrestling. The fight does threaten a grandstand finish, but it never quite comes to fruition, and therefore the fight never hits the heights hoped of it.

The same cannot be said for the rest of the card, with no shortage of explosive knockouts or submissions.

Ironically it is another fight on the card that goes to a decision, between Stout and Lauzon, that wins fight of the night, and it is a worthy winner. It is a back an forth all action fight. Lauzon constantly threatens with his power and takedowns, whilst Stout impresses with his footwork and excellent combinations.

Elsewhere, the is a must-see clash between Yvel and Dos Santos. Both are vicious strikers and this turns out to be just as explosive as it threatened to be.

The same can be said of the clash between Daley and Hazelett, although you mightn't want to blink in this one, otherwise you will miss it.

In the prelims there is also no shortage of good fights, look out for impressive performances from Martin Kampmann, Mark Munoz and Cole Miller.

Despite the arguments, the injuries, the illnesses and the criticism, UFC 108 still manages to triumph in the face of adversary. Once again there could be a little more on the second disc, but the fights are all good, if not spectacular.

It is not a must have DVD, but it certainly wont disgrace your collection.