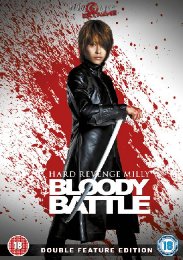 In a near-future, post-apocalyptic Japan, Tokyo has become a wind swept desert while Yokahama City has been taken over by gangs of vicious criminals, the worst among them being the notorious 'Jack Brothers'. Butchered and left for dead by Jack and his gang after being tortured and forced to witness the murder of her husband and infant child, Milly (Miki Mizuno) awakes in a deserted hospital to find herself miraculously alive and now in possession of a partly mechanized body. With nothing left to live for and driven only by revenge, Milly vows to hunt down the killers and to settle the score. First learning the art of sword combat from a master swordsman, she eventually embarks on a journey that can only lead her to straight to Hell.

Having tracked down and confronted the Jack Brothers, Milly is approached by a beautiful girl named Haru (Nao Nagazawa) who asks her to help find and kill the person responsible for murdering her boyfriend. Initially reluctant to become involved in any more bloodshed, Milly recognizes and identifies with Haru's passion for vengeance and agrees to train her so she may exact her own revenge. But no sooner have they begun than they are accosted by a gang of Jack's sycophants who want Milly dead once and for all. Led by a cyborg-armed psychopath named Ikki, they prove not only to be a match for Milly and Haru, they are also found to be in possession of a secret that could drive a deadly stake between the two women.