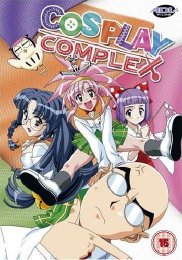 Cosplay is that curiously Japanese invention, where fans of an anime show dress up as their favourite characters. And shame on you if you buy your costume off the peg. In this production line world, cosplay may be the only thing keeping the art of the seamstress alive. Your average anime convention is filled with the real life counterparts of 2-dimensional cel-shaded characters. Competitions are held to determine the best looking costume, and simply wearing it isn't enough. You have to have a routine, a talent to showcase your cosplay skills. There are people who can actually make a living from cosplay, and the ultimate goal is to be a cosplay idol. Except it isn't a Japanese invention at all, as anyone who has ever wandered into a Star Trek convention by mistake can attest to. 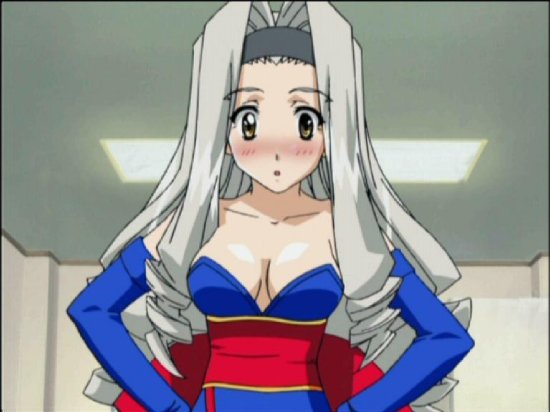 Yes, I am aware that I am recycling an intro I used for the Nurse Witch Komugi DVD, but it seemed expedient, after all, there aren't all that many cosplay comedy themed anime shows out there, surely! Cosplay Complex is shorter at just three episodes, but is jam-packed with comedy, wackiness, and energy. Like Komugi, it takes a pot shot at the world of cosplay enthusiasts, those grown ups who are still playing dress up, but unlike Komugi, Cosplay Complex is ruder, raunchier, more ribald, and other words beginning with r and ending in sex. It's a show that went straight to OVA (Original Video Animation) because it was just too risqué to broadcast.

The East Oizuki Academy Cosplay Association is going places. They're going all the way to the Cosplay World Series, or they would be if they had sufficient membership, or teacher sponsorship. Still, that isn't enough to dampen the spirits of Chako, Maria, Athena and Reiko, who do their best to attract attention with the most imaginative costumes around. Chako also has magical assistance from the fairy Delmo, and her owl friend Ikebukuro. But they have challenges to face, perverts, peeping toms, and leering fans, and that's just the club chairman Gorou. All three OVA episodes of Cosplay Complex are presented on this DVD from ADV, along with some extra goodies. 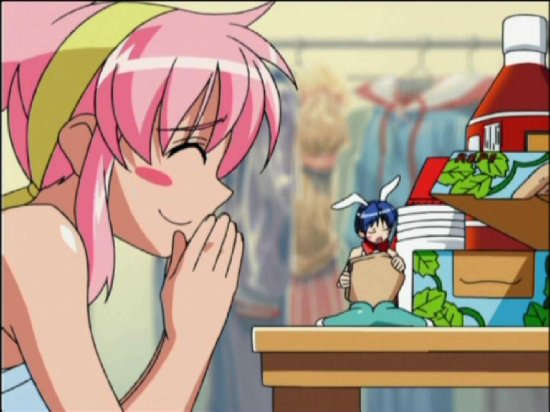 1. The Cosplay Club Is Born
Gorou may be perverted, but at least the girls of the Cosplay Association have him under control, and he comes in useful defending them from the other perverts who clamber up outside the window to catch a glimpse of them changing. But Gorou's heart is in the right place, and he keeps the club ticking over. Only that may not last for much longer, as they need at least one more member, and Maria's sister Athena is too young. They also need a teacher to sponsor them. Fortunately they have a rat in the ceiling. This rat is exchange student Jenny Matel, and she wants to join the club. If only she's good enough. Gorou organises a Cosplay Battle, and it will be down to Chako to put the newcomer in her place.

2. Summer Training Camp of Charm
Summer holidays aren't for relaxing, not for the Cosplay Club. This year they are heading to the beach for training, and attendance is mandatory. There are some strict exercises to be performed, skills to perfect, and money to be made, at least for Gorou, who believes that a cosplay café on the beach would be a good training method. Matters of the heart get in the way for Chako though; whose number one fan and photographer Tamiya will also be there. Can Chako confess her feelings to him? Her fellow Cosplay Club members decide to help her along the path to romance, whether she wants it or not. 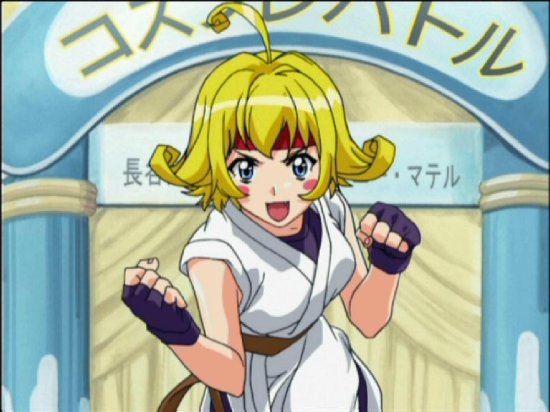 3. The Final Battle: Showdown in the East Oizuki Academy Gym!
When Chako runs into a cosplay fan during a rainy day, it seems innocent enough, but Tomii Tsukasa is something of a ringer. She's a member of the Shin-Takurazuka Academy Cosplay Club; a rival school that last year won the World Series. Now their leader Ranka is paying a visit to Oizuki to throw down a challenge. And when it becomes apparent that she also has a thing for Tamiya, Chako takes it personally. It's time for a cosplay showdown in the gym!

Cosplay Complex gets a pretty fair 4:3 regular transfer. It's a comedy show, so expect lots of bright, shiny, primary colours, and appealing but simple character designs. The animation is simple, but effective, doing just what it needs to get the story across. The disc is also light on the usual NTSC-PAL transfer issues. 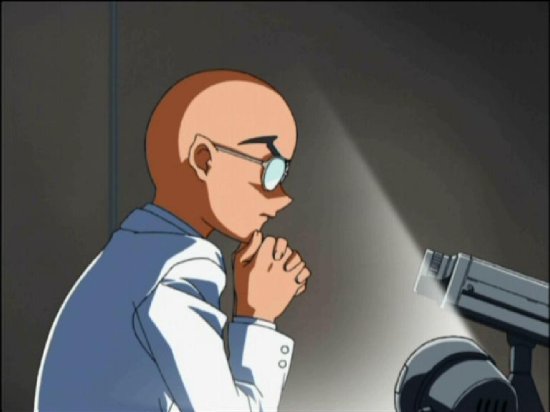 Audio comes in DD 5.1 English and DD 2.0 Japanese, with optional translated subtitles or signs. Once again, the English is best avoided for the obvious reasons, a painfully unfunny dub which considers comedy best delivered at the top of one's lungs. I also thought that the 5.1 sounded hollow and awkward. The Japanese track is the audio of choice here, entertaining and appropriate.

Let's begin with the reversible sleeve, offering character cosplay poses, and the mini-poster, which has a cosplay adventure penned by Kunihiko Fujiwara on the back.

There are a couple of Easter Eggs on the disc for you to locate, offering some commercials and promo videos, and you'll also find trailers for other ADV products, including Jinki Extend, The Place Promised In Our Early Days, Gilgamesh, and Sorcerer Hunters.

The Cosplay Identification 101 is a 5-minute slideshow of the various cosplays in the episodes, a handy guide to the anime series and console games that are referenced.

Annotated Sketches is a slideshow that lasts 6 minutes, and offers production sketches and character guides.

You also get the Japanese Opening, and all three Clean Closing Sequences. 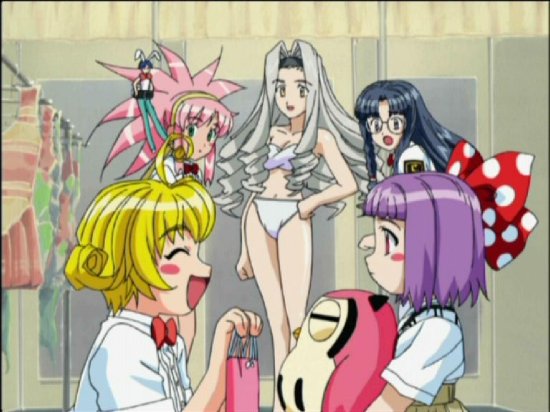 You'll laugh. You'll hate yourself for doing it, you'll positively despise yourself for even smirking, but you will laugh. Cosplay Complex is what you would call a guilty pleasure, but it goes beyond that, it is patently wrong. It's not the silliness of the thing. You'd expect silly from a comedy anyway. It is rude, although not particularly so. It's a teeny bit sexist, but again, not much more than any similar comedy. Nudity abounds, as does plenty of inappropriateness, and that is to be expected, even demanded in a medium that is renowned for fan service. No, the one thing that will probably rub most the wrong way is the comedy paedophile. There has to be one sticking point, one sour note in what's otherwise a perfectly reasonable anime comedy, and it's the character of Jenny Matel, exchange student, cosplay fan, would be pederast. And to my eternal shame, I laughed. 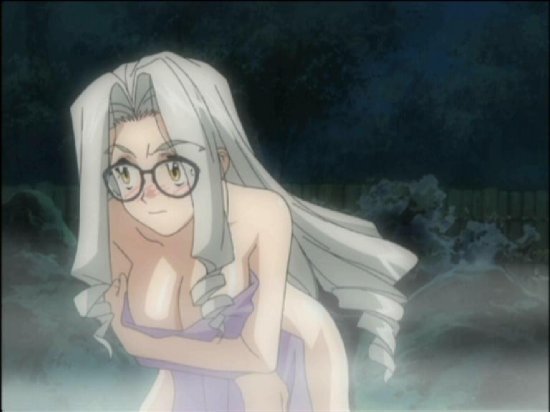 Of course what kind of society would we be in if we had boundaries to comedy. There's always a reason to push the envelope, something Chris Morris has exploited brilliantly. But it helps if there is a message. With the Brass Eye thing, it was a comment on society's behaviour, and the witch hunts that ensue following media stoking of the flames of righteousness. In Cosplay Complex, there's no other reason for Jenny Matel other than she is a funny character. There's certainly no message. The one saving grace is that she's a victim of her own schemes, rather than a genuine danger to society. Her one main target is Maria's kid sister Athena, and when her attentions drift to the child, Athena's response is a plaintive, 'But I'm so innocent', at which point big sister Maria runs to the rescue. In the second episode, dressing up as a mascot attracts infant attention, but it's so much attention that Jenny is simply overwhelmed. Later when she tries sneaking up on Athena once more, she's intercepted by an amorous older woman, and gets more than a taste of her own medicine. 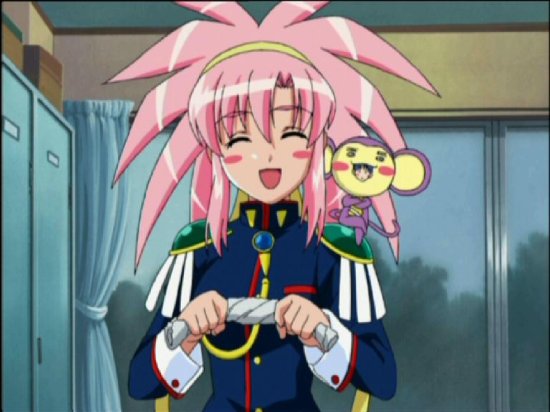 At this point you may be wondering if there is anything else to Cosplay Complex. There is. After all, Jenny Matel is just one character among many, and her peccadillo just takes up a small amount of screen time. The show is actually about wannabe cosplay star Chako Hasegawa, who with the aid of the fairy Delmo aims for the top. Her sewing skills aren't too hot. In fact she's pretty clumsy too, which makes it convenient for a fairy with a liking for sweets to show up, and for the price of a few pastries, all sorts of magic are applied to give Chako an edge in costumes, usually in the bosom area. Gorou is an interesting oddball, cosplay enthusiast, and coach of the club. He's patently a pervert, avaricious too, using cosplay to come up with countless money making schemes. He has an odd relationship with the club's senior member Reiko, narrating his way into her fantasies, causing confusion when reading a raunchy novel out loud. It's all de rigueur for anime comedies, zany, surreal, unpredictable and energetic. In fact, were it not for Jenny, it would be just like half a hundred other anime comedies, unremarkable entertainment. 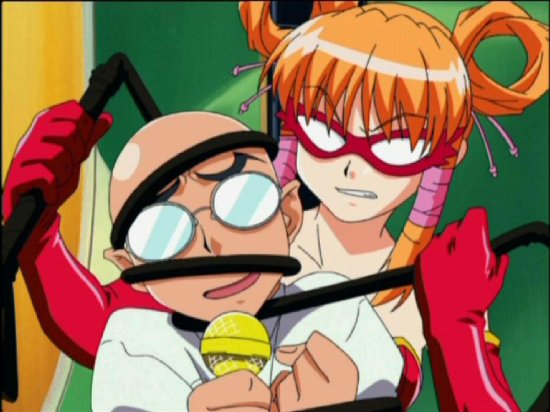 With Jenny however, it gathers an air of controversy, it practically demands a 'guilty pleasure' accolade, and it does deserve it. You'll like Cosplay Complex. You just won't like yourself afterwards.