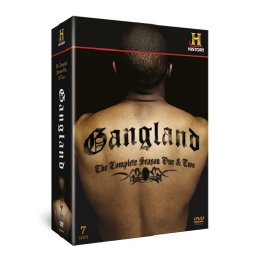 Synopsis:
Go where few dare to go with GANGLAND They are fierce, brutal and ruthless and determined to leave their deadly mark on the streets of America. From the inner cities to the suburbs, from the West Coast to the East, American gangs have a rich and terrifying history, HISTORYTM explores the savage bloodlines of some of the worst, infiltrating unbelievably dangerous terrain to provide exclusive interviews and rarely seen footage. Both former and current gang members offer solid insight into why gangs exist, how they operate, their increasingly destructive methods and the alarming rate at which they are spreading. Its chilling, its raw and most of all its real. HISTORYTM gives viewers an all access pass to the real story behind the most feared and dangerous gangs a world rarely seen by the uninitiated. Episodes feature exclusive interviews with police officers as well as former and current gang members to provide wellrounded, insider stories of history s most notorious gangs.

Features all the episodes from the show's first and second series. Includes: 'American Gangster', ' You Rat, You Die', 'Code Of Conduct', 'Behind Enemy Lines', 'Race Wars', 'Kings Of New York', 'Stone On The Bone', 'Hate Nation', 'Gangster City', 'Blood In, Blood Out', 'Basic Training', 'Blood Oath', 'Root Of All Evil' and more.