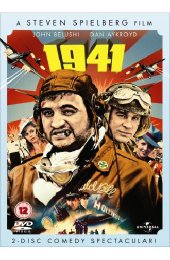 DVD
The Rutles: All You Need Is Cash: 30th Anniversary Edition (UK)

DVD
Rutles, The: All You Need Is Cash (UK)

When people talk about the success of Steven Spielberg, 1941 is not within that conversation. In fact, since his major movie success with Jaws in 1975, you can count the number of flops Spielberg has had either critically or commercially on one hand. But when you do this, the first you will come to is 1941.

1941 tells the story of the 'invasion hysteria' that hit America after the attack by the Japanese on Pearl Harbour. Many were convinced that Japan would try to invade the country and this film is based on that time when a Japanese submarine did arrive on the coast of California and attack the country. Sadly, unlike in Britain were Dad's Army, which is really the same concept, was a huge comedy success because it focused on the people and really built on the characters before the story was even a factor... this film does not.

As a comedy 1941 is a scattergun of ideas and gags and if you can be amused simply by someone falling over, being hit or being covered in eggs, then this film is a riot. If you are looking for something a bit more subtle, or funny, then 1941 is a terrible, terrible movie. At the time, as it still is to some extent, it was marketed as a John Belushi and Dan Aykroyd film, but they actually share no scenes throughout the movie and actually feel almost wasted. Belushi as Capt. "Wild" Bill Kelso, has a few moments of insanity as he flies around in his plane and generally acts like a slob, but nothing in the film would support the idea that he was a comedy genius that people say he was. Aykroyd as Sgt. Frank Tree is a complete waste of time and spends half the film in a catatonic state which is as funny as it would be in real life.

The film is awash with cameos from the likes of Christopher Lee as the Nazi Officer, Slim Pickens as a captured prisoner of the Japanese and even one from a young John Candy. However, no one is used to even a tenth of their abilities and Pickens listing what he had in his pockets was obviously a homage to his role in Dr Strangelove and had the potential of being funny, but it just didn't work.

As you watch the film you wonder if you have missed something. Stanley Kubrick apparently told Spielberg that he should have marketed the film as a drama rather than a comedy and I believe this is true. If the film had toned down the slapstick and just presented the story he could have had a perfect dark comedy on his hands as it is this is a film with just too few really funny jokes and because of that it is really difficult to watch or enjoy.

The second disk is brimming with extra features and actually watching these is far more interesting than watching the film itself. The documentary is very dense that goes into all aspects of the film from creation to the production and its reception. Throughout the documentary, you can tell that everyone involved enjoyed making this film and unlike films such as Alien3 where everyone seemed to be bitter about the experience. The only problem I have with this documentary is there seems to be a general ignorance to the reception of the film and everyone seems to be under the impression that because it is being released on DVD, that this means the movie has some significance. Sadly, that isn't the case... Even Battlefield Earth got a DVD release!

8mins of deleted scenes, most were cut probably because of time, but maybe it was simply because they didn't add anything to the actual film. The odd thing is, the only deleted scene that I cared about which was the coat hanger gag that was reused in Raiders of the Lost Ark, but was originally shot for this film is not included. Though I'm sure the Raiders version is much better, it would have been nice to have seen that version and see why it was cut out.

The rest of the disk revolves around slideshows and include one which is a mix of good and bad reviews which is interesting and it's almost perfect that the film acknowledges that it isn't perfect and wasn't a success and makes me like the film a lot more. A slideshow of film stills and one with the pictures altered with 'comical' captions on each which are a bit hit and miss and a slideshow of the film's marketing posters and finally three trailers.

1941 is a mess of a movie. It neither works as a comedy and certainly doesn't as a drama, however the bonus disk is actually a fairly interesting look into the development and creation of a picture from start to finish. Though it would have been nice if they had been talking about a good movie, it still makes for fairly interesting viewing. It's just a shame that there's the horrible movie to go with it.