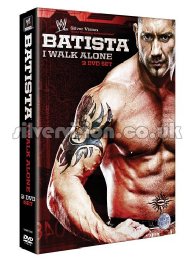 Synopsis:
Five-time world champion "The Animal" Dave Batista is a study in contrasts. A self described loner from the mean streets of southeast D.C., Batista is known for his stylish appearance and laid back attitude. But in the ring he unleashes an explosive fury befitting his nickname. For the first time ever, fans of "The Animal" can relive his storied career with this 3-DVD set that includes a biography of Batista's life both inside and outside the ring. Batista himself guides us through a never-before-seen look at his rough and tumble childhood, his triumphs and tragedies, the pressures of being champion, and more. In addition to this revealing look at "The Animal," this set features some of the greatest matches and moments from Batista's career.

Hell in a Cell Match for the World Heavyweight Championship
Batista vs. Triple H
Vengeance - June 26, 2005