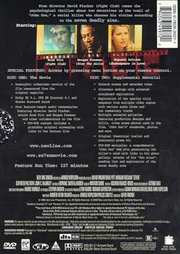 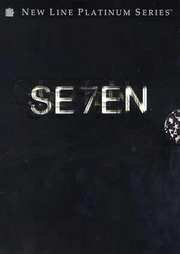 Synopsis:
Brad Pitt and Morgan Freeman star in this searing psychological thriller about two detectives on the trail of a vicious serial killer who chooses his victims according to the seven deadly sins. Also features a riveting performance by Gweneth Paltrow and brilliantly directed by David Fincher, "Seven will knock you out of your seat!"

FILM: Seven deadly sins; seven ways to die. David Fincher has once again proved himself as one of Hollywood`s most visionary directors with Se7en. As the title implies, the movie is based around the seven deadly sins, and how an `insane` man carries them out on `innocent` victims. Se7en stars Brad Pitt (now becoming a Fincher fav!), Morgan Freeman, Gwyneth Paltrow and Kevin Spacey as John Doe, the killer. Fincher cleverly disguises the identity of the killer by neglecting to mention Spacey in the opening credits- he is,though, the first to appear when the credits roll. Se7en is a highly enjoyable movie with some trademark Fincher visuals; many darkened indoor scenes, with that underlit, eerie feel. The acting is very good, especially from our leading man (Pitt) and Spacey as the emotionless killer. The movie presents a number of gruesome death scenes that were highly critised for `unnecessary` gore; I do feel, however, that a film such as this would be pretty pointless without such disturbing imagery to reinforce it. The plot is very solid and stands up well against closer scrutiny- characters are well defined, the script has a real purpose (take note Wachowski brothers!) and the death scenes really leave the viewer with a lasting impression. Overall, Se7en is a masterpiece of modern cinema, but was critised by many for its dark and disturbing nature. These simple minded critics should be made to realise that all the gore is compulsory in order to make the film work. The first deadly sin: GLUTTONY (don`t over indulge!).
PICTURE QUALITY: Anamorphic Widescreen 2.40:1.
The picture has been totally remastered from scratch here. Thats right, Fincher and co. have taken the original negatives, cleaned them up and then colour corrected every frame. What we are left with is an extremely detailed and solidly coloured transfer, which quite clearly shows all the effort that has been made. This becomes even more evident if you have seen the original release of Se7en; the old transfer, by comparison is pretty dull and soft looking. By comparison, the new transfer shows up absolutely no grain, no artefacting and no print flaws. The image is simply perfect and definately breathes more life into the movie. Congratulations must go out to New Line Cinema for all the effort they have made with the picture quality in this brand new Platinum Edition DVD. The second deadly sin: GREED (don`t get more than your pound of flesh!).
SOUND QUALITY: DTS 6.1 ES discreet, Dolby Digital 6.1 EX and Dolby Surround 2.0.
Each and every track on offer is of the highest possible quality, being remastered like the picture specially for DVD. The sound transfer is almost perfect, with excellent range and bass throughout all kinds of different scenes. The only real flaw I can find is that in some of the noisy action scenes, dialogue was lost a little. For example, when Pitt and Freeman chase the killer through the apartment block, the line "get out of the f***ing hallway please" is barely audible. I shouldn`t complain though, as a lot of hard work has gone into making this soundtrack sound just the way Fincher wants it to be heard. Look out for highlights such as the opening credits, the mid-movie chase sequence and the brilliantly original finale. Howard Shore`s magnificent score is also really loud and effective all the way through the movie on this DVD. The third deadly sin: SLOTH (god knows... don`t be a drug baron perhaps?).
EXTRAS: Being a two disc Platinum release, we have a large amount of extra material on offer here. Although not quite as comprehensive (or funky) as the extra material seen in Fight Club, this selection is very good. We have all the usual trailers, deleted scenes and promotional material here; the most insightful feature, though, has to be the `Mastering for Home Video` section. This section includes everything from the telecine mastering process to the digital colour correction process, which may sound like boring technological jargon, but is surprisingly interesting. The fourth deadly sin: LUST (all about desiring someone without loving them or something).
OVERALL: Being a great fan of Fincher, I bought this DVD the day it came out (19/12/2000), serving as a nice Christmas present. Whether you love or hate the movie, the pristine transfer and sheer amount of extra material make Se7en: Platinum Edition a worthy purchase. The fifth deadly sin: PRIDE (cutting off your nose to spite your face would be a good example of this!). And the final two sins... ENVY (basically a stronger form of jealousy) and WRATH (taking revenge when someone chops your wife`s head off...).
posted by Richard Knowles on 13/4/2001 06:10
9 / 10

After the lousy "Alien 3",Director David Fincher bounced back with this memorable thriller.Brad Pitt and Morgan Freeman are
on the trail of a killer whose murders are based on the seven
deadly sins.

Released in 1997 as a bare-bones,non-anamorphic,"flipper"
disc,New Line has re-released the movie as a 2-disc
Plantinum Series special edition.

The movie is presented in 2.40:1 anamorphic widescreen and
looks fantastic.The movie has undergone color correction and
some re-framing under the supervision of Fincher.The picture
is very clear and contains virtually no defects.

The audio has been completely re-mixed and the results are
pretty great,with Dolby EX 5.1 and DTS-ES 6.1.The Dolby track creates an excellent listening experience.

Disc 1 contains no less than four commentary tracks and
each one is on a specific theme:

The commentary is titled "The Stars" and features Fincher,
Brad Pitt,and Morgan Freeman.As with their commentary for
"Fight Club",Fincher and Pitt deliver a very entertaining and
engaging commentary.Freeman was recorded separately
but his comments are quite interesting.

The third commentary focuses on filming and features Dyer,
Fincher,Francis-Bruce,Fincher,Production Designer Arthur
Max,and Cinematographer Darius Khondji.This commentary
is very interesting because the look and design of the film is
explained.

Disc 1 includes DVD-ROM content such as a printable original
screenplay and links to the movie.

The first extra on disc 2 is an exploration of the main title
sequence and features storyboards of the rough and final
version as well as numerous audio channels and angles.The
second section features deleted and exteneded scenes with
optional Fincher Commentary.The scenes include an alternate
opening,and more of "Pride" aftermath.The third section has an an alternate ending plus one in storyboard form,with both
having optional commentary from Fincher.The fouth section
features numerous animated galleries with photos from John
Does apartment and commentary from the photographers.
The fifth section features full motion video details of John Doe`s
log books with commentary.The sixth section is promo
materials and features the trailer and Theatrical EPK.The
seventh section is a list of a filmographies from cast and crew.
The eight section is the highlight as it shows how "Se7en"
is mastered for the home thater.The final section is DVD-ROM
content and features a John Doe website.

I`d like to finish by commenting on the packaging.The cardboard slipcase is similar to "Fight Club" and the inside case is designed to look like John Doe`s Log book as it contains writings and macabre pictures.

An obese man, found dead, face-down in a plate of spaghetti: a strange murder that unites an all-too-seasoned old detective who is on his way into retirement and his young and capable-yet-green replacement.

The story is rich and complex, and is revealing in both human nature and philosophy as well as in twists. To this end, only the most simple overview of the plot should be disclosed. In brief, the film is a study in human natures and motivations, all being played out in the context of a very grisly set of moral murders and the investigation and apprehension of the killer. The background material (as mentioned) is that of the seven deadly sins, which effectively sets the stage of this modern tragedy. In fact, I was mostly impressed by the way that this movie almost stands as a contemporary tragedy in the tradition of the ancient Greek tragedies, which take human foibles and flaws and exploit them in the downfall of the characters. Incredibly, this story does just that, all the while really provoking further thought from the viewer over complex issues of morality and the concept of sin in the context of this modern world.

This film is an unrelenting ride of shocks and twists. David Fincher has given fans of several genres a film to really sink their teeth into. Where this film succeeds is the visual aspect of the film, it is graphic and brutal, but in all actuality, most of the violence is done off screen and the viewer is left with just quick views of the aftermath of the crime. As is true with most horror, that which you can`t see is the most disturbing, because in one`s mind, the horrors are much more real and graphic. The story is filled with a dark, foreboding atmosphere and the dreariness and rain that is constantly falling only add to the mood.

Overall, this disc is incredible. It is clearly worth adding to any library of movies, and is likely to be watched again and again. The payoff? Each time one views this movie, more subtle details present and make the overall experience even more rich and thought-provoking. This is a prime example of how all films should be released to discs.....from the fantastic looking film, the wonderful sound remixes and the amazing amount of extras, I can with all confidence recommend this as a DVD that every fan should check out and have no doubt that everyone will find something about the discs to keep them coming back to watch again and again.