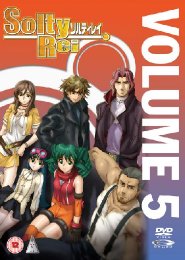 Solty Rei has been getting progressively darker over the previous two volumes, and given the domestic bliss and minor angst of the first two, it's a welcome change. With this penultimate instalment, things promise to get dark indeed, as the series begins its gradual crescendo towards what will hopefully be a gripping climax. It's an understatement to say that I have been looking forward to volume 5.

The Blast Fall devastated the city, a mysterious event twelve years ago that cost the lives of thousands. It's effects are still visible today, an Aurora Shell that arcs overhead, preventing anyone from leaving the ground or even the building of high-rise towers, interfering with communications, as well as the number of cyborgs known as Resembles roaming the city, survivors who have had their bodies repaired with technology. It's the Reestablishment Universe Committee, the RUC that is at the heart of the city's reconstruction and the proliferation of cyborgs. Roy Revant works in this city as a bounty hunter for the Maverick Hunters Company, although his hard-bitten brutal approach means that he pretty much works alone. He's been hunting ever since the Blast Fall, in which his daughter Rita vanished, an event that eventually claimed the life of his wife. The loss and grief still prey on him; he's still looking for his daughter, or maybe just salvation, when one day it literally falls from the sky. 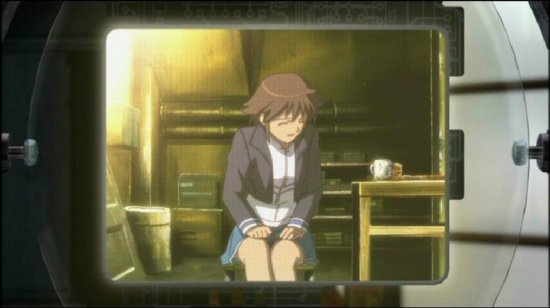 SPOILERS: Yes, I'm repeating the warning. There are spoilers ahead for what has happened in the previous two volumes, so don't say I didn't warn you. Go away now if you still haven't seen them.

19. All Together
Celica's corpse on the ground, Rose looking down on it from a skyscraper rooftop, callously calling in a clean-up team from the RUC, and Solty and Roy arriving to witness the tableau. That's a hell of a reunion, and now Roy is more conflicted than ever. Not that Rose cares. She's happy at the RUC, working under Chief Ashley Lynx, increasing in strength and ability, and now the Chief has something to show Rose, a secret kept beneath the RUC building. But slowly and surely, the good guys are beginning to catch up. First Solty rescues Accela from being drenched and depressed in an alley, then they find Integra as well, and gather at Roy's to piece together what is going on. Out in the desert, the news has even reached the old man Joseph, and he's decided to come out of his self-imposed exile, first by sending Roy a package, and then by heading to the city personally. Of course Roy jumps the gun, and heads to the RUC, determined to get Rose back. Except that Chief Ashley intercepts him. 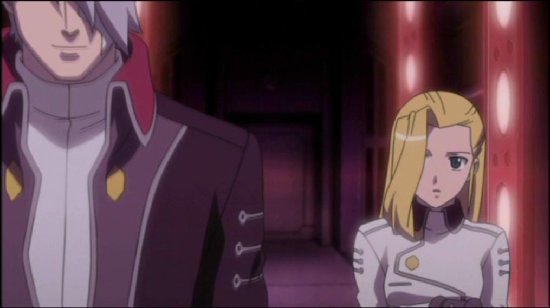 20. Catastrophe Calls
So now Roy's place is under constant surveillance. It means that Integra and Accela can't move freely, and they also have to put a block on their mail, as it will be opened and read by the RUC before it gets delivered. When they get to the post office it's too late, as they learn that Joseph's package is already in the system. It's a race to get to it first, except that it's Integra who finds it. She's snuck out of the flat on her own mission into her past. She heard and recognised Joseph's voice on the telephone, and now she needs to understand just who she is, and where she came from. It's a path that will lead her to a futile confrontation with Ashley. Ashley also runs into Solty on a shopping trip. Then Kasha and Miranda find Solty's lifeless body on a trash heap. The good news is that Joseph finally returns to the city. The bad news is that he hasn't the spare parts needed to repair Solty.

21. The Time For Truth
Integra's sneaking out wasn't entirely subtle, which is why everyone has to go on the run when RUC forces arrive to storm Roy's flat. Joseph knows where to head though, and he leads everyone beneath the city, far into the world's past, which is useful as he has a history lesson to relate that explains everything, the Blast Fall, the Resembles, the Proceeds, and Ashley's plans. Deep underground, there also exists the technology to repair Solty. They're running out of time though. It isn't long before Integra is arrested, and everyone else implicated. It's time to bring the fight to the RUC. 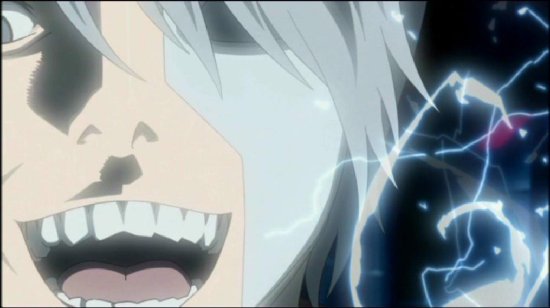 22. Three Girls, Three Intentions
Roy and the Anderson brothers go to RUC headquarters to rescue Rose, to rescue Integra, and to face Ashley. They'll need a diversion, which is where Accela comes in. She'll create a ruckus outside headquarters while the others sneak in, and of course she'll have Solty's help. The trouble is she has something else in mind, revenge against Ashley, who betrayed her and her friends, and revenge against this cruel city that allowed all this to happen. So it is that a whopping large gun platform appears in the city, blasting things at random. It's something Solty has to stop, she has to rescue Accela, but she isn't expecting Rose to be there as well, and Rose has no intention of rescuing Accela. A three-way midair standoff develops, while Roy runs into Ashley in the RUC building, only to find that Ashley isn't exactly human. If that isn't enough, the city computer, acting in self-defence, has taken control of every Resemble, and is using them as a weapon against the intruders. 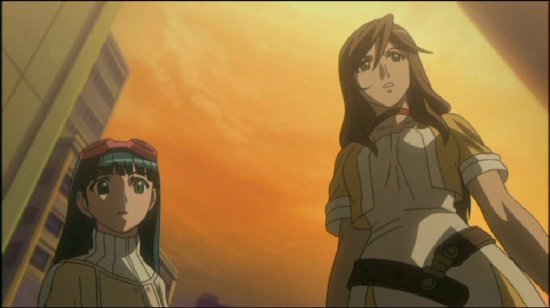 Solty Rei gets a 1.78:1 anamorphic transfer. The image as you would expect is an NTSC-PAL conversion. It's a pretty good one though, not too soft, prone to ghosting, or plagued with excessive judder. It is sharp and well defined, the animation is fluid and clear, and everything is almost as smooth as silk. Solty Rei is a bright colourful anime, plenty of vibrant colours and daytime scenes, although the future world, while distinctive and accomplished, certainly isn't memorable. The character designs are up to Gonzo's usual standards, while CGI is liberally used to enhance the 2D animation. Some of the mundane objects like cars aren't all that impressive, but when it comes to the fantastic, like mecha and robots, Gonzo's traditional design ethic comes through well. 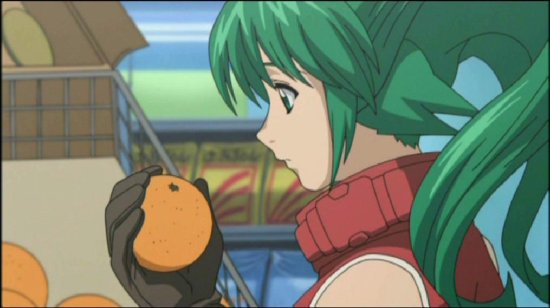 Sound comes in the form of DD 5.1 English, and DD 2.0 Japanese along with optional translated subtitles and signs. I found no problems with my usual preference of the Japanese track, while the dub is one of the really good ones, well cast and with distinctive characterisations. I was very impressed with the English voice of Roy Revant. The show gets the usual catchy j-pop themes, while the incidental music owes a fair bit to those old US cop dramas, with a noir-ish edge.

There is a problem on this disc, in that the Japanese audio for episode 19, the first on the disc, is loud to the point of distortion. It's pretty awful on the higher frequencies, and especially when there are more than two sound sources active at once on screen. It's almost unbearable, and I'm glad that it's only confined to the one episode. Fortunately there is no such problem with the English track.

You get the usual textless credit sequences, and this time there are trailers for the Gravitation OVA and Slayers Try.

Solty Rei is getting exciting now. As I've mentioned so often, it's a typical Gonzo show, with the futuristic cyberpunk-ness, the mystery, the conspiracies and the dark secrets. This is the point of the series where the secrets start being revealed, the conspiracies start to unravel, and the mystery comes close to a resolution. Actually, if I do have a concern, it's that it seems to have started a little early for Solty Rei, and it seems to have shot its narrative bolt too soon. The second and third episodes on this disc appear to lay it all on the line, and I find it hard to envisage the show needing another four episodes to resolve. Solty Rei could wind up being one of those series that get bonus episodes after the conclusion. Still there is plenty of time to let the story go out in style, and who knows, it may throw us a few curve balls yet. 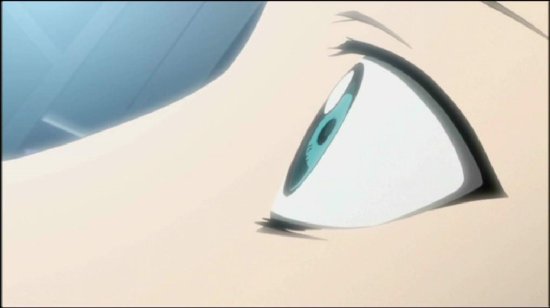 Actually, now that I look over what I have noted about this volume, it all looks like spoilers to me. Solty Rei has been a really smart series in the way that it has introduced the world and the characters, built up the back-story and hinted at what may lurk beneath its bright surface. Now that the series is coming to a conclusion, the story is coming together in a consistently revelatory way. It's as if every new development is a surprise, which makes writing about what is happening a nightmare. 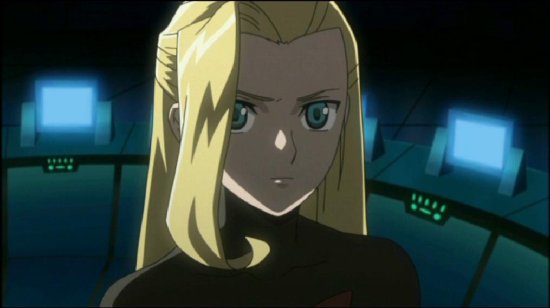 The character arcs are worth commenting on though, especially the changes that Rose has gone through, coming back from the dead, then working for the RUC as their latest super-warrior. She seems to have made a complete about face from the idealistic freedom fighter from before, but as this volume reveals, it's that same idealism that has moved her to join Ashley and support his plans, it's the same idealism that has caused her to commit some horrific acts, and that same idealism that causes such internal conflict for her as this volume progresses. Then there is the utter shock for Roy to find Rose still alive after seeing her die, yet their reunion is marred by what looks like Rose killing Celica in cold blood. If Roy was depressed before, it's nothing compared to the torment he goes through now, and once again, Solty is left helpless when it comes to comforting him. The blame for all this lies at the door of the RUC, and Chief Ashley in general, but the desire for vengeance turns nastiest in the surviving RUC girls, Integra and Accela. Integra launches a single-handed crusade against Ashley, just as recklessly as Celica did, while Accela's grief literally drives her insane. 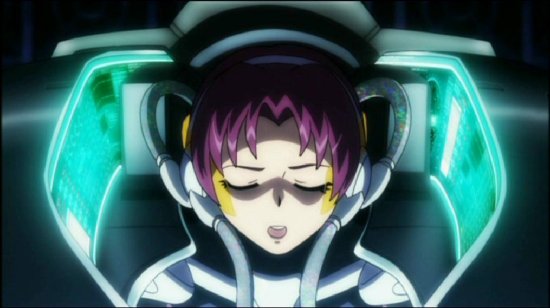 Of course there are contrivances; this is a Gonzo show after all, and the giant mecha rising from beneath the city to lay waste to its environs is a little too convenient. It does allow for the volume climax, a three-way aerial conflict between Rose, Solty and Accela, and this is for me the only sour note in the volume, as Solty tries desperately to redeem Rose, although it seems her main contention is how much fun it is to spend time in the kitchen cooking for Roy. There's sweet, there's saccharine, and there's cloying. This transcends all three. 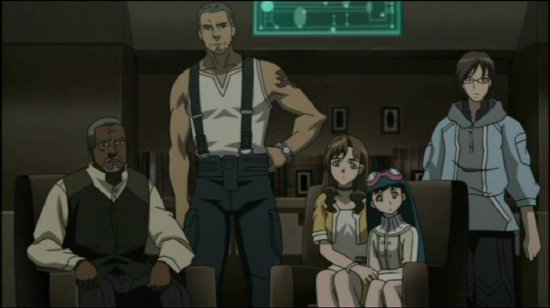 Just one volume of Solty Rei to go. Go on Gonzo, give us a decent ending. This volume is essential if you are collecting of course, but if you are looking to just dip your toes into the world of Solty Rei, then better start at volume 1, this volume is just too spoiler-ific.