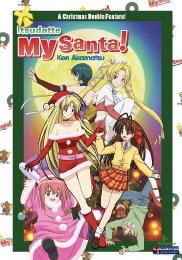 Typical! Would you believe that we in the UK depend more than ever on the US for our anime? The special relationship is alive and kicking when it comes to Japanese animation coming to our shores. Take Always My Santa for example. It was due for release in the US in time for Christmas 2007, and as is apt to happen, we in the UK were due to get it a year later, Christmas 2008. So what happens? The US publishers, Funimation make a mistake on the age rating on the DVD cover (a voluntary code of practice, not mandatory as in the UK), and wind up having to withdraw the entire run. There wasn't enough time to get it relabelled in time for the holiday season, so the whole thing was postponed for a year, which is when we were due to get our release of Always My Santa. But we can't be seen to be keeping pace with the neighbours, lest some anime fan with a hole burning in his pocket decides to throw caution to the wind, and import the UK release. As a result, our release of Always My Santa was also delayed by a year to placate the American company that it was sub-licensed from. We're America's little bitch. This rant is my own personal opinion, and bears no resemblance to the facts, probably. 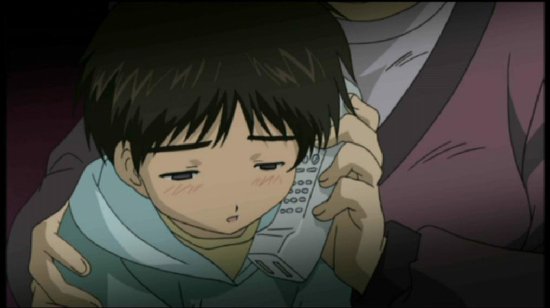 My indignation can be traced back to my appreciation of Ken Akamatsu's work. His manga have been adapted into several entertaining anime; indeed it was Love Hina several years ago that sparked off my second love affair with the medium. I've also partaken of two television adaptations of Negima, and my admiration of the harem genre (hapless teen male surrounded by a bevy of beauties, romantic comedy silliness, awkward situations, and said teen pummelled regularly by irate and offended love interests) has last long past the point it was fashionable. I've wanted to see Always My Santa ever since I heard about it, an adaptation of one of Ken Akamatsu's earlier manga, and surprisingly short and sweet. It was a single volume of manga that inspired this short two-episode OVA. At least it's just in time for Christmas, but knowing Akamatsu, it's probably not wholesome family fare. 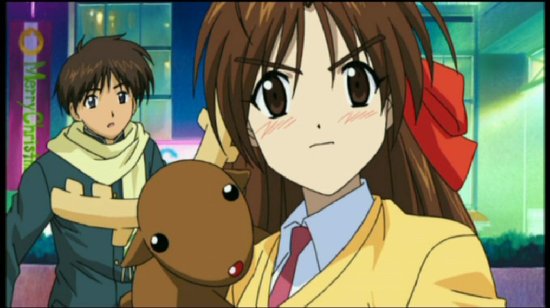 Episode 1: My Santa
What would you name a child born on Christmas Eve? Santa of course. It only makes sense. You'd think the name would be enough of a problem, but since he was a child, Santa's parents left him to be raised by his grandmother, and took off to parts unknown to pursue their careers, lavishing him with one phone call each Christmas, making him feel guilty that he wasn't happy for them. The last thing that Santa believes in is Christmas. Which is why Mai asks him to spend the night with her. No, it isn't what you, or everyone else in the shopping arcade where they meet is thinking. Mai is a Santa Claus in training, tasked to bring happiness to every child in the world, and her unhappiness detector (an antenna hairstyle), has detected Santa's self pity. She's having none of it; she's going to spend the night granting his dearest wish. The only problem is that as a Santa in training, the only gifts that she can bestow are those beginning with S. But if she can get Santa to believe in her, something truly magical will happen, except she wasn't expecting to fall in love with him. The real problem is that Santa's in full Bah Humbug mode. 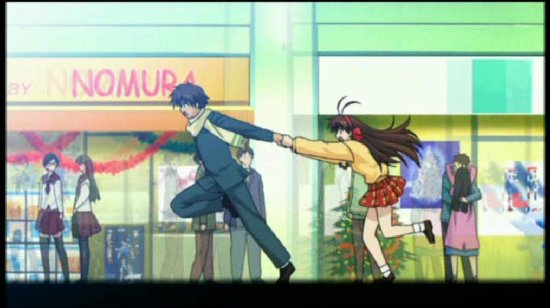 Episode 2: Merry Christmas Once More
So Mai used up all her magic, and she can't get home. Naturally she winds up moving in with Santa. We catch up with them six months later, at the beach, soaking up the rays. Of course their domestic idyll isn't going to last. Especially when Mai's sister Maimai shows up, looking for some quality time with big sis. She also heralds the arrival of Mai's rival in Santa school, her best friend Shally, and the first thing that happens is a challenge for Santa's appreciation. Fun and frolics are short-lived though, when Mai's teacher Noel-sensei arrives to impart some bad news. Mai's time with Santa is coming to an end, and it's almost time for her to return home. She has just six months to tell him goodbye, but as next Christmas approaches, she finds it harder and harder to tell him she's leaving. It's a good thing she has a friend like Shally to help out. 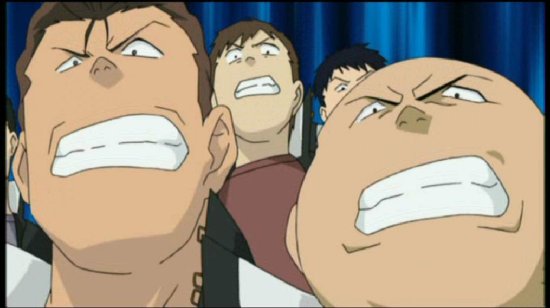 Always My Santa gets a 1.78:1 anamorphic transfer, which does the job just fine. The image is clear enough, there are few if any artefacts, and the standards conversion doesn't invite criticism. What does invite criticism though, is the standard of animation. You usually expect an OVA to be a higher quality production than a television series, but here the reverse is the case. Always My Santa does just enough to get the story across, and little more. This is one of those shows where a frame will be wholly static, except for the characters that may be talking at that time. It's simple, it's cheap, and for an anime made in 2005, it's really quite primitive. Of course, with this being an OVA, it does mean it can be a little raunchier than the average television series. 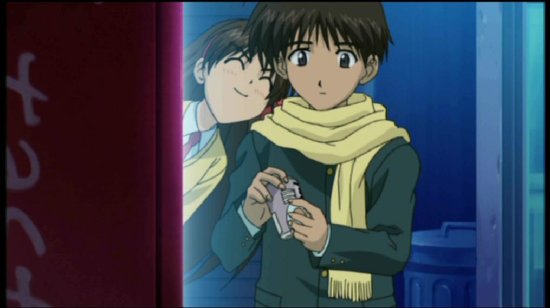 You have a choice between DD 2.0 English and Japanese stereo, accompanied by a sole translated subtitles track. The big draw for fans of the Japanese language will be the presence of Aya Hirano (better known as Haruhi Suzumiya) as Mai in the dub, and Mai does seem like a hyperactive version of the melancholic one. I couldn't tolerate more than a few minutes of the English dub however, as it's one of those comedy tracks where comedy is equivalent to loudness, and the louder the funnier. The music is mostly forgettable fare. 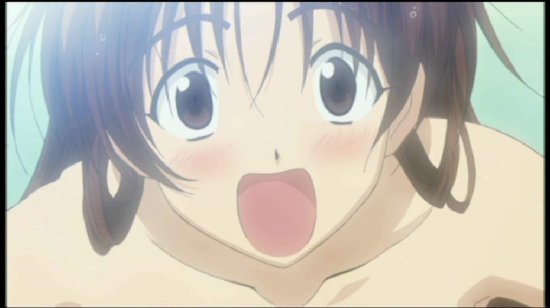 If you're up for some ribald animated festiveness come Christmas-time, then Always My Santa may just fill a gap. It's fun, entertaining, fast-paced, silly, energetic, and with an inner core of schmaltz that fits right in with the festive season. Given the choice of Ken Akamatsu product though, I'd much rather watch the Love Hina Christmas Special again. Ah My Santa may be entertaining, but it really isn't very good when all is said and done. 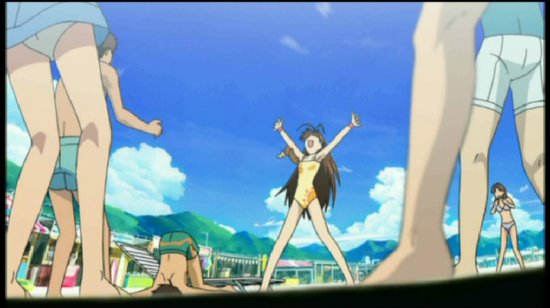 The main problem is one of length. It's just too short. The beauty of Akamatsu's longer series is that in the middle of the random nudity, the pratfalls, the awkward situations and general harem antics, there is a good deal of time spent developing the story and getting to know the characters. In any rom-com, it's important to have sympathetic characters, and for an audience to develop an empathy, it needs time to get to know them. There is no such time given to the characters in Always My Santa. Instead, we rush head on into the comedy antics, never really scrape the surface of who these characters are, and are expected to rely on the schmaltz as a shortcut to caring about their lives, loves and losses. It doesn't work. Mai is supposed to be charming and quirky, but she never amounts to much more than irritating and annoying. While Santa fills the role of eternal loser so well, that rather than caring about whether he eventually prevails, I was tempted to give him a slap and tell him to buck his ideas up. For such a short OVA, there's a lot of waste here as well. I enjoyed the first episode quite a bit it must be said, but my heart did sink, when I realised that a good amount of the second episode was given to recycling the jokes from the first, rather than offering something original. It's bad enough in a long series, but in a two-episode disc, it's positively depressing. The second episode introduces the requisite elements in a harem anime, the other girls, but it just lacks the time to develop either Maimai or Shally beyond the superficial, although given that the central characters lack growth anyway, that's sort of a misplaced nitpick. Always My Santa is fun, but it's forgettable and disposable. It's like the majority of Christmas Specials in that respect. When was the last time you went out of your way to rewatch an Only Fools and Horses, or a Vicar of Dibley festive special? Most Christmas television is a one off affair, there's no reason that Christmas anime shouldn't be just as perishable a commodity. Watch Always My Santa by all means. Just make sure that your bells are a-jingling when you do.