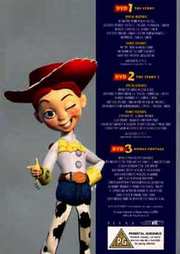 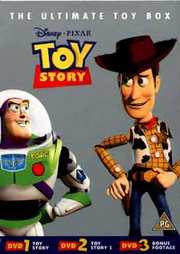 Toy Story
Now you can experience a spectacular new dimension of fun and adventure with Disney`s most imaginative motion picture and the recipient of a special Adademy Award - Toy Story.

When a flashy new "space ranger" named Buzz Lightyear enters the world of a pull-string cowboy named Woody, it sparks an outrageously funny tiff between toys.

Now, Woody`s top spot in the heart of his young owner is in jeopardy... and soon so are the lives of Woody and Buzz. Accidentally whisked away from home and into the clutches of a neighbourhood bully, these two squabbling rivals must work together as a team if they are to escape. With toy box pals Rex the dinosaur, the Green Army Men and Mr. Potato Head ready to lend a hand, Woody and Buzz unite in friendship for a phenomenal adventure home.

Visual wizardry, uproarious laughs and the coolest characters ever assembled transform the world`s first computer-animated feature into an incomparable movie marvel. No matter what your age, TOY STORY will dazzle you every time.

Toy Story 2
A Masterpiece of great story telling, `laugh out loud` humour, wonderful music and state of the art animation - Toy Story 2 is great fun from both kids and adults!

This enormous box office smash hit has Worldwide critical raves and won a Golden Globe award for Best Picture! Toy Story 2 features the original voice cast, headed by Tom Hanks and Tim Allen as Buzz Lightyear. Joining them is a round-up of unforgettable new characters, including Jessie the cow girl, Bullseye the horse and Stinky Pete the prospector.

While Andy is away at summer camp, Woody is toynapped by Al, a greedy toy collector. His best friends including Buzz, Mr Potato Head, Slinky Dog and Rex set out on a heroic rescue mission to save him. Along the way, they meet a whole host of new friends including Jessie the cow girl and Bullseye the horse. Together, the Toy Story 2 gang set out to make sure Woody is home safely before Andy returns...

This Is an absolutely fantastic package, really enjoyed both films and the extras were excellent (in particular the preview for munsters, can`t wait for that release!)

Ever since i first glimpsed the cgi trickery in Disneys Alladin,i always wondered when Disney would go all out and produce a totally computer generated animated feature.Well in quick succesion we witnessed Toy Story,then A Bugs Life,followed by Toy Story 2.
This fabulously packaged three disc set embraces what must be two of the most groundbreaking films in animated motion picture history.
The stories of both films are outlined above so i wont waste time repeating information.
Toy Story,on release,was and still is a staggering achievement in computer animation,which in turn is presented here on dvd in one of the most immaculate transfers ever.If you have a decent widescreen tv then what you see here is John Lasseters Pixar Studio weaving its digital magic.Everything from facial expressions to bodily movements exhibits an attention to detail which brings a smile to your face every time.Coupled with the fabulous sound,with voices seemingly tailor made for each character,Toy Story is a thoroughly enjoyable movie thats great for all ages.
Toy Story 2 takes things up a gear.Put simply,you cannot help but enjoy this film!The amount of work that went into the production is plainly evident for all to see.Pixar have pulled virtually every trick out of the hat to produce a visually stunning animated movie.There are so many clever touches,Buster the dog has you thinking whether they`ve scanned a real dog into the film or not!
It also go`s through the entire emotional spectrum,providing laughs,emotion(Jessies song cant help but tug at the old heart strings),parody(spot the references!)and that feel good factor that puts a smile across your face on every viewing!
As with the 1st Toy Story this is a direct digital transfer so the image quality is nigh on perfect,with sensational colours and a `looking glass` quality to the picture that makes you want to reach out and grab the image.Special mention must be made to the amazing sound,if you have a top notch Dolby Digital sound system then this will stretch every speaker in the system.Gary Rydstrom(who mixed the sound for Saving Private Ryan and A bugs Life),provides a sonic soundscape that is both clever and immersive,check out the toys crossing the road to experience multi directional sound at its best.Toy Story 2 is an undisputed classic,and Pixar should be rightfully proud of what has been achieved-theres simply too much to write about here,so i suggest you go and buy it(if you haven`t already)to see what all the fuss is about.
To complement the two movies,disney have seen fit to provide a 3rd extras disc,covering pretty much everything you`ll need to kow about these fantastic movies.The only thing thats missing is the fabulous commentary tracks from the region 1 versions-dont let that put you off though,just enjoy two of the most fantastic films of modern times.
Lets hope Pixars next movie Monsters Inc can follow in Woody and Buzz`s footsteps.
Unmissable
posted by Westy on 26/7/2001 04:41